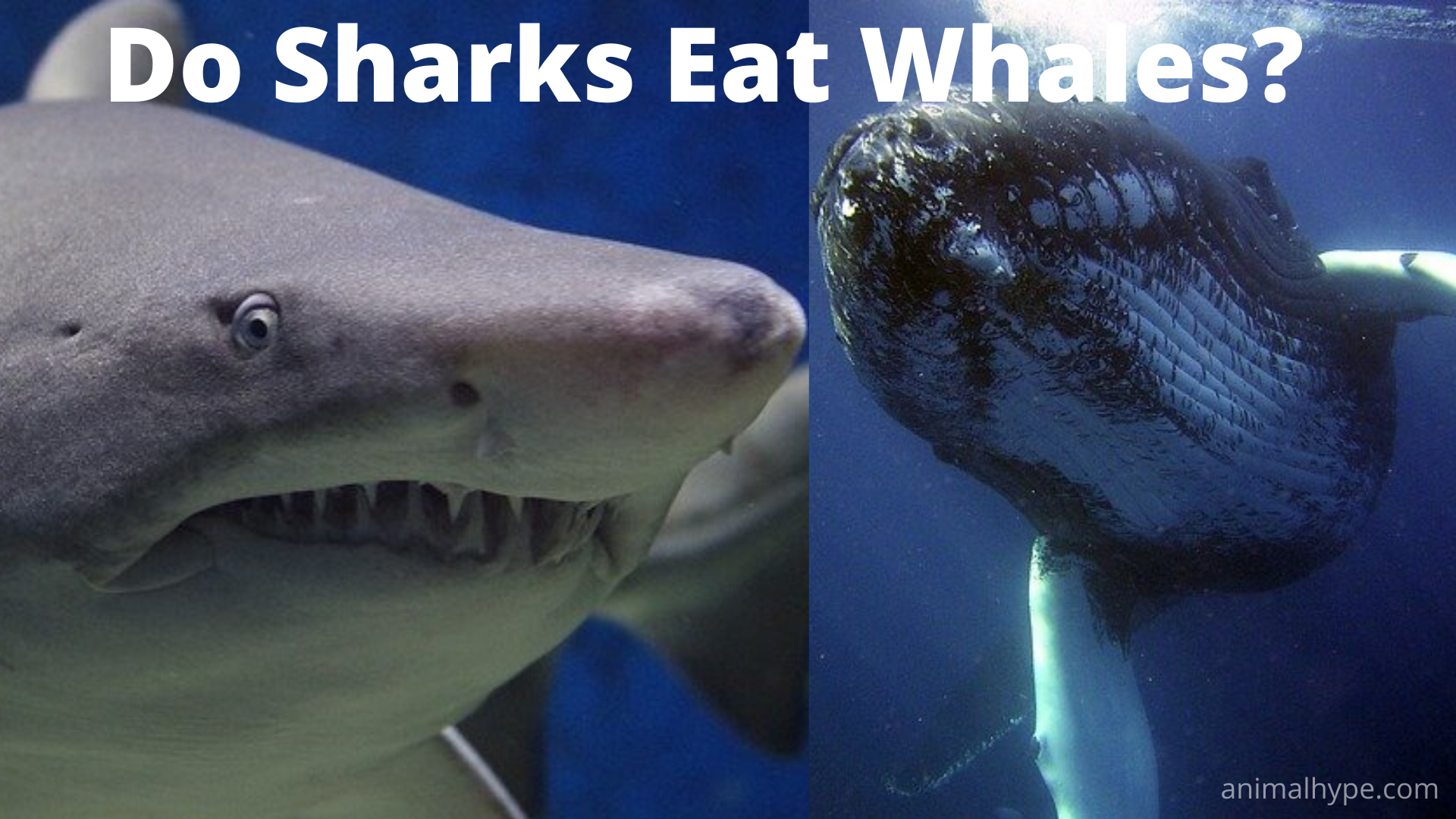 When we think of sharks and whales, the image that conjures up in our heads is of bloodthirsty giants that are a constant threat to divers. But little do most people know that sharks and whales are two separate organisms and indeed wonders of nature.

You may find it hard to believe that most of the giant whales aren’t carnivores like sharks. Over centuries sharks have sharpened their hunting skills that they have become the deadliest predator of the aquatic world. There are not many organisms in the sea that are devoid of a shark’s threat.

But what about whales?

Do sharks eat whales? Yes, sharks do hunt down and eat whales. That being said, it is important to note that not all sharks are capable of hunting down and eating whales. In general, only the smaller whales are preyed upon by bigger sharks. For instance, the smaller whales like the bottlenose dolphins and pygmy right whales are preyed upon by the bigger sharks such as Great White Sharks, Tiger Sharks, Bull Sharks, and a few others.

The term shark is the name of a family of fish, and they do not point out to one specific species of fish. Among these 440 different species of sharks, only a few, namely the Great White Sharks, Tiger Sharks, Bull Sharks, and some others, are capable of attacking and eating a whale.

It is important to note that most whales are huge that sharks don’t prefer messing around with them. In short, yeah, the powerful among the family of sharks do hunt down and eat whales.

This article will have an in-depth look at the different types of sharks and know more about sharks hunting whales.

The diet of a shark

At present, there are about 440 identified types of shark in the world with a size ranging from 20cm to 21 feet. All of these sharks are found to thrive in salt waters except for a few who live in freshwaters. Irrespective of where they live or their type, sharks are carnivorous, and they feed on other fishes.

If you didn’t know, sharks are capable of landing a deadly bite on to their prey. For instance, the 21-foot long great white sharks can land generate nearly 4000 PSI of bite force. The bit force varies with the size of the shark. Normally bigger the shark, the more the bite force would be.

As said, the bite force of a shark is dependent on how big the shark is. Due to which the type of fish it hunts greatly depends on the size of the shark. No shark would ever take a risk to attack a large fish.

The same applies to the shark that hunt whales. No shark would dare to mess around with a whale that’s considerably larger than itself because it is not worth taking the effort. Among the different types of sharks, only a few are capable of attacking a whale because of its sheer size.

How do shark hunt whales? 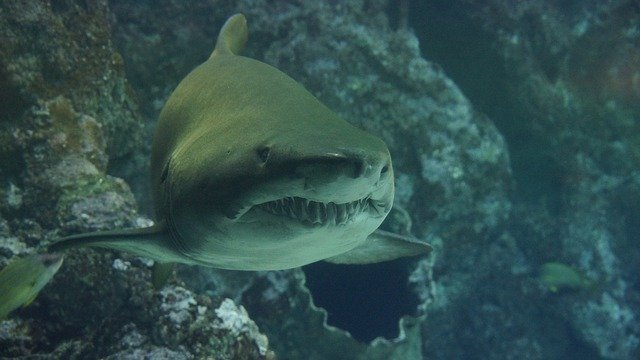 It Is interesting to note that the method of hunting varies with species. We will have a look at the sharks hunting tactics.

It all begins with the sharks identifying potential prey. If you didn’t know, sharks are known for their highly developed senses.

Sharks can sense even the slightest hint that indicates the presence of potential prey. For instance, sharks are highly sensitive to smells that they can detect the slightest smell like the smell of a drop of blood.

Their nostrils are extremely sensitive that they can identify the direction from which the smell originated and turn to that direction.

Also, the lateral lines that run through the shark’s body allow them to pick up even the slightest vibration.

Apart from these, the sharks have specialized pores in their snout known as ampullae of Lorenzini that helps them pick up the feeble electrical impulses from the prey’s muscle that helps them identify the prey.

Once the sharks have located their prey, they would move toward that location stealthily. Depending on the type of sharks, they have different ways of stalking the prey.

For instance, the bottom-dwelling sharks blend themselves into the darkness and do a recon. Whereas, the active hunters like the great white sharks circle the prey from a distance before going for the kill.

Once the shark has spotted and traced the whale, they will attack them. Depending on the type of shark, their attack may vary.

For instance, the great white shark that hunts seal after spotting its prey positions itself under the unsuspecting seal.

They then swim upwards at full speed that it bursts out of water. By the time it is back on the water, the shark will have the seal in its mouth. Whereas, the thresher sharks are found to use its powerful overhead, and sideways tail slaps to stun its prey before landing a deadly bite.

Do sharks hunt all whales?

No, sharks do not hunt all whales. As said in the earlier section, only a few among the shark species are capable of hunting the whales. For instance, Great White Sharks, Tiger Sharks, and Bull Sharks are some of the sharks that hunt a whale.

To summarise, sharks only attack those whales that are smaller than them or at least of their same size.

How do whales defend themselves? 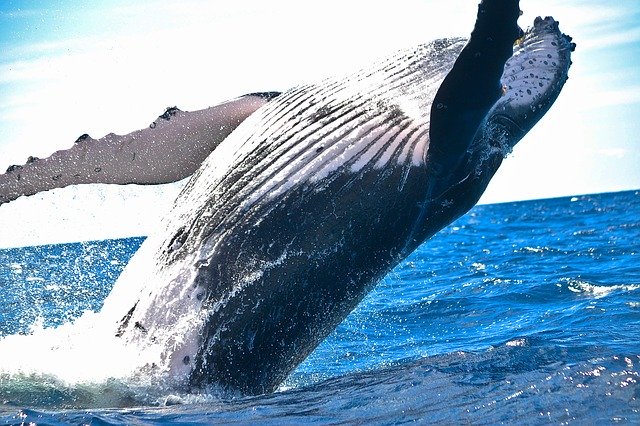 Sharks are not the only enemies of whales; rather, they fear predation from the other larger whales too. For instance, the killer whales or Orcas are found to feed on smaller whales.

The mode of defense of whales greatly differs between the different whales. In general, whales are found to have a fight or flight response to threats.

Whereas, this isn’t the case with the grey whales. Grey whales are found to fight back their predators ferociously.

These grey whales are found to be too aggressive that they bravely ram the fishing vessels they perceive as a potential threat.

Similarly, the Pygmy sperm whales that live in depths of around 3000ft have a bizarre defense mode. When attacked by a predator, they release the fecal material into the water and swirl it around with their fins. The predators would lose appetite after swimming through the fecal material.

Which whales are hunted by sharks?

To have a clear understanding of the whales that are hunted by sharks, it is important that you understand the different types of whales.

Whales can broadly be classified into two

The toothed whales are those whales who have something similar to teeth in their mouth. These teeth aren’t as sharp or strong as that of the sharks and are made out of Keratin. Some examples of toothed whales are dolphins, sperm whales, and porpoises.

Baleen whales are the larger among whales. Unlike the toothed whales, they do not have teeth; rather, they make use of their baleen to feed on the smaller fishes and krill.

In general, baleen whales are too big for the sharks to attack except for the larger ones like the great white sharks. This means that depending on the size, whales may be preyed upon.

It is rather interesting to note that Orcas are found to hunt down and prey on the sharks. Orcas tend to feed on the liver of the sharks.

Though the big blue whales may appear to be a potential threat to sharks, they aren’t. Blue whales are gentle giants, and they mainly feed on krill and small fishes.