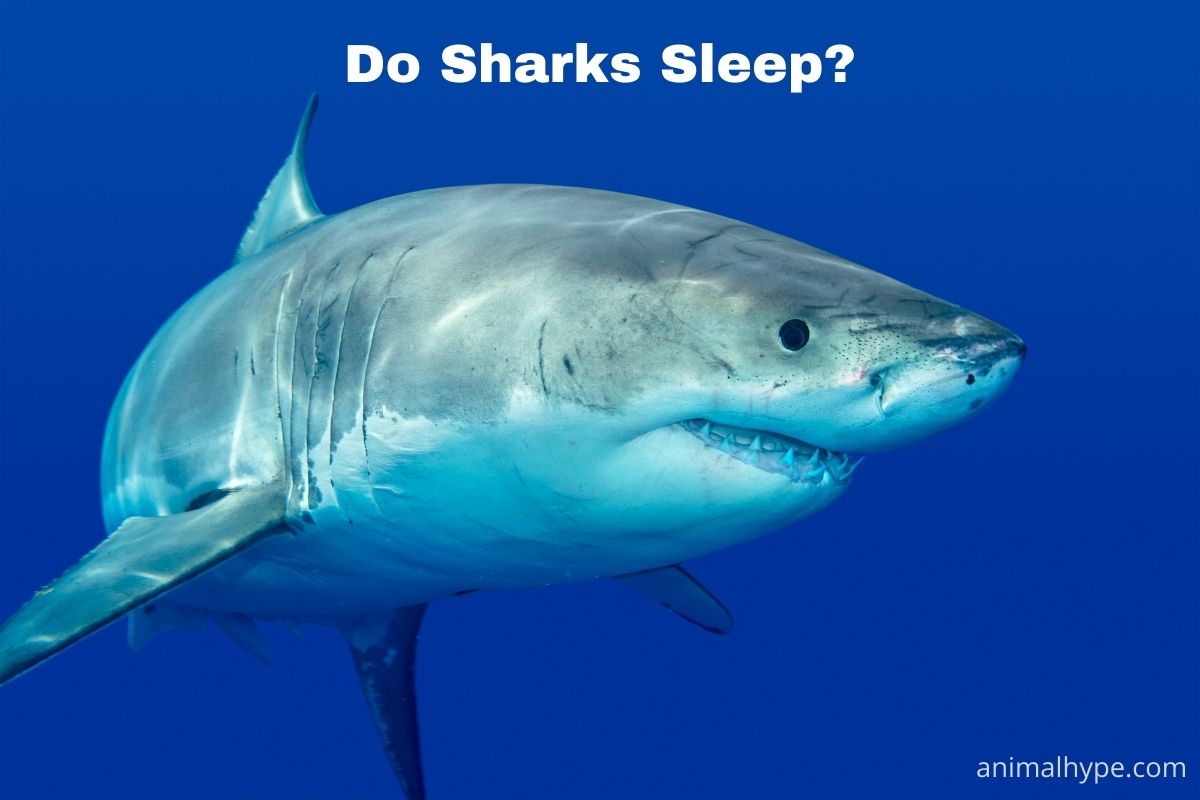 With their sandpaper-like skin and dramatically varying sizes and colors, sharks are truly fascinating marine creatures. These majestic fish have been believed to be around for over 450 billion years, yet there is so little known about them. For instance, take their sleeping pattern. Do you think you know about the resting routine of sharks?

Do Sharks sleep? Yes, sharks do sleep. However, their way of sleeping is very different from ours. Unlike us, they are never in a completely unconscious state. Even when they rest, half of their brains are still active, and their eyes are fully aware of everything that goes on around them. When they rest, they simply float against the current with both their eyes and their mouth open. This is what their slumber is like.

Do you wonder when do sharks sleep? Or are you curious about their sleeping position? Don’t worry; this article holds the answers to all your questions. Here, you will learn everything you need to know about sharks and their sleeping habits.

Yes and no. The answer to this question is quite complicated. None of the activities in the shark’s lifestyle is similar to what we call “sleeping”. However, the scientists have gathered that there are periods when they enter a subconscious, slumber-like slate. They have termed it as a “rest period”.

In 2016, a group of scientists studying a female Great White Shark near Baja, California, noticed that the shark fell into a similar state for several minutes, drifting slowly against the current. This is the closest these creatures come to sleeping.

How do Sharks sleep?

In order to “sleep” as we call it, sharks enter a subconscious state where half of their brain is at rest. We do not have sufficient data to give you an average time span for which they remain in the resting period.

When they are resting, they float slowly in the opposite direction of the current with their mouth open so that the water keeps flowing in and passing through their gills, giving them oxygen that they need in order to stay alive.

The concept of “Yo-yo swimming”

Some scientists have come up with the theory that sharks often swim actively upwards to the sea’s surface and then rest as they slowly descend to the depth. Some have termed this phase as a “dreaming phase”. However, it is difficult to say whether all the shark species do it or not.

When do Sharks sleep: day or night?

Unlike humans, who traditionally sleep for about 6-8 hours at night, sharks have no fixed sleeping schedules. Their rest periods might not last that long either. However, most of the shark species are strictly nocturnal; they are active during the night, hunting for prey. On the other hand, during the day, they are somewhat sluggish. This could mean that their rest periods mostly occur during the daytime.

Where do Sharks sleep?

This is a difficult question to answer because we are not sure whether all shark species prefer the same spot for sleeping or resting. However, from all the data we have gathered so far, it seems like they prefer to swim into the deeper parts of the oceans before they enter their rest period. There, they slowly move against the water current as they rest.

There could be various reasons behind it: maybe they are looking for areas with the least disturbance, or they might prefer the darkness at the bottom. However, without proof, these are all just theories.

Do Sharks sleep while moving? 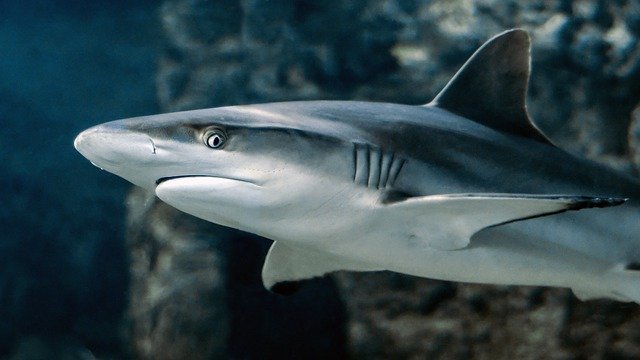 Can you imagine someone sleeping while they move? Not really, but that’s only because we’re humans. Sharks, being sharks, have a definition of sleep that is quite different from the one we follow.

But why would sharks need to sleep while moving? In order to understand it, you will first have to learn about how sharks breathe.

There are two ways in which all fish species breathe: Active Ventilation or Buccal Pumping, and Ram Ventilation.

In Active Ventilation, a fish pumps the water through its mouth in order to pass it over their gills, where the oxygen dissolved in the water is absorbed in the gill and transferred into their blood. This process requires the continuous movement of their buccal cheek muscles, therefore, lending it the name “Buccal Pumping”.

Several shark species can breathe through active ventilation. Following is a list of some of these shark species:

But what about the other shark species? How do they breathe? That’s where Ram Ventilation comes into the picture. The sharks that cannot breathe through active ventilation are either the ones that have lost the ability to do so or didn’t have it in the first place. Therefore, in order to let water pass through their gills, these sharks need to move forward with their mouth open.

These Shark species are called obligate ram ventilators and need to keep moving forward so that they can keep breathing, i.e., keep living. This is why it is impossible for them to sleep being stationary like us. Therefore, they take rest while moving continually.

Do Sharks sleep with their mouth open?

As humans, we can sleep with our mouths open as well as closed. It depends on individual habits, but both ways are safe for us. However, for the sharks, their mouth is the only way the water gets in, and oxygen can be absorbed into their gills. Therefore, closing their mouth is never an option for them, even when they are resting.

Do Sharks sleep with their eyes open?

Yes, the Sharks keep their eyes open at all times throughout their life, including their brief rest periods. The reason behind it is: they are incapable of closing their eyes! Yes, you read that right.

Most people believe that sharks have no eyelids. However, it is not true. Sharks have a total number of six eyelids, three for each eye. The first one is the upper eyelid, the second one is the lower eyelid, and the third is a translucent nictating membrane.

While the first two eyelids are immobile, the third ones can move. However, the only time these lids seem to cover their eyeballs is when they are attacking their prey.

Thus, their eyes are not only open but also aware of their surroundings when they are in the rest period.

Do Sharks sleep upside down?

No, sharks do not make any such changes when they rest. However, when they turn upside down, they enter a state that has been termed as “Tonic Immobility”.

In this state, their breathing relaxes, their muscle contractions become steadier, and their dorsal fins straighten. On average, this state is known to last for about 15 minutes, after which they regain their mobility.

Most scientists use this state as anesthesia to keep them still in order to perform some experiments on them. However, tonic immobility is a stressful experience for sharks and reduces their breathing efficiency. If kept in such a state for a longer period, they can even potentially die.

What do the Sharks do other than sleeping?

It’s not like Sharks have a job or a lecture to attend, so how do they spend all their time? Well, from what we have gathered, Sharks have about three things on their to-do list. They enjoy cruising in the sea. When they are hungry, they go hunting for prey. And once they’ve had their fill, they find a spot (preferably somewhere deep) and rest.

Which shark species lives the longest? The Greenland Sharks (Somniosus microcephalus) are a vulnerable species of shark known to have the longest lifespan among the sharks and all the vertebrate species. They live for about 300-500 years on average.
Do sharks have bones in their body? No, instead of bones, the skeleton of the sharks is made of cartilaginous tissues that are present in our nose and ears. Cartilage is a connective tissue that is much softer and more easily breakable than bones.
Which is the most dangerous shark species? The Great White Sharks (Carcharodon carcharias) are the deadliest and the largest shark species in the world. With 300 teeth in their mouth, they are believed to have the most powerful bite among all living animals.

Do Sharks sleep? (summing it up)

Let’s return to our original question: do sharks sleep? Yes, they do, but not like us. Unlike us, the sharks don’t lose all consciousness when they sleep, which makes sense since they are a predatory species. With their eyes and mouth open, they float against the ocean current when they rest.