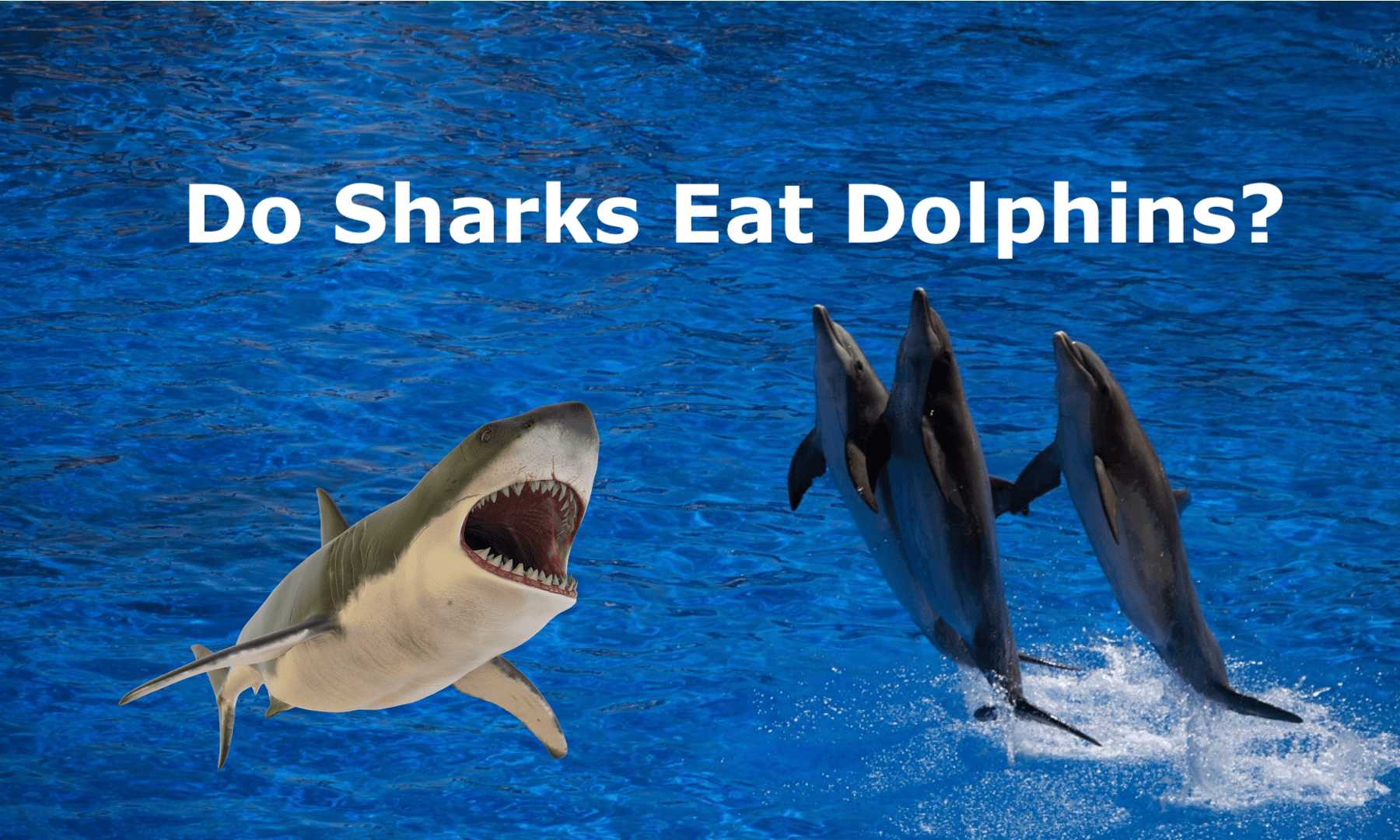 Sharks belong to the category of apex predators in the food chain in virtually all parts of the ocean. They are known as the ultimate terror of the seas. But do they eat dolphins?

When we say sharks do eat dolphins and that they belong to the category of apex predators, don’t conjure up the image of defenseless dolphins. And don’t be deceived by the cuteness of a dolphin; they can be aggressive at times. They are so dangerous that even the sharks think twice before attacking them.

In this article, we will discuss in detail how a shark attacks a dolphin, their defense, and a lot of other interesting facts about the tussle between a shark and a dolphin.

In some areas such as the east coast of the United States, sharks are the most dangerous predators a dolphin has to face. This tussle among sharks and dolphins has led to most people believing that sharks have some acute antagonism towards dolphins. But that is nothing more than a myth.

Similarly, not every attack on dolphins is intended to kill them. Some scientists believe that this attack is designed to be a defense when dolphins enter their territory. The bite marks on dolphins show that sharks strike from below and behind the dolphins.

Though sharks are known to prey on dolphins, some scientists have seen them tolerating each other and co-existing in the same area. Sometimes they are even seen to completely ignore each other.

How do dolphins defend themselves? 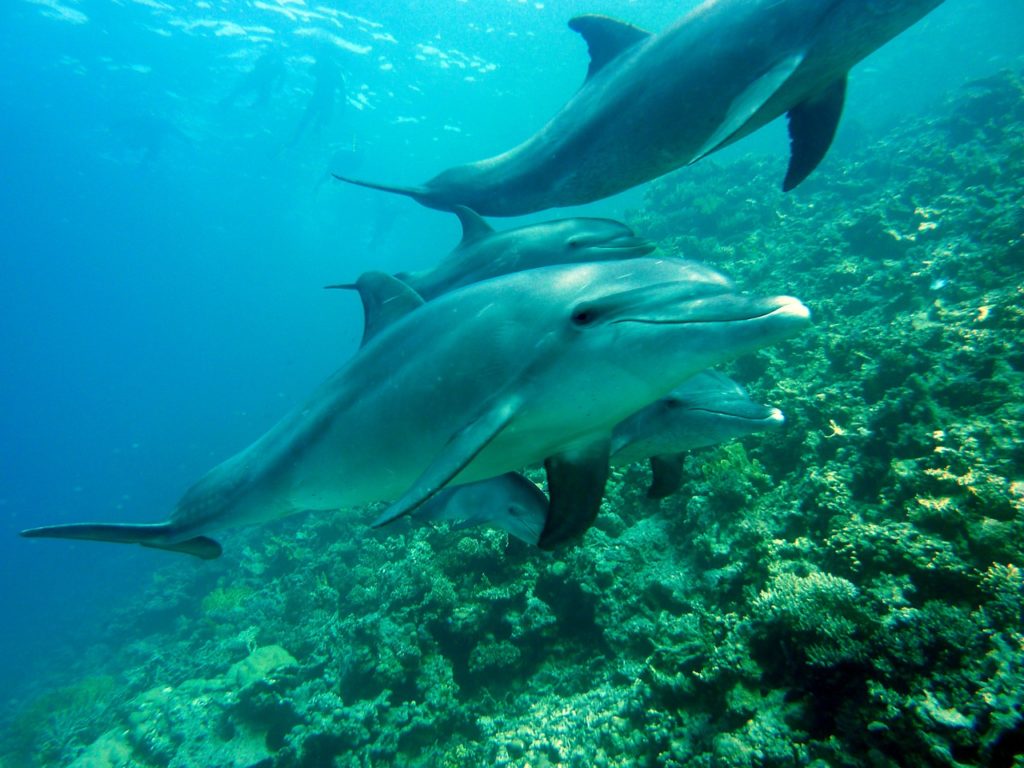 Sharks may be apex predators, but dolphins are not any less than them.

Dolphins are social animals that travel in groups of hundreds. Most of the time, sharks tend to avoid attacking them because they are more trouble than it is worth.

Dolphins travel in significant numbers, hence they have a better chance against sharks. They are even found to carry out a coordinated attack on sharks.

As mentioned in the earlier sections, sharks mainly target the calves and the weak dolphins among a group as they are an easy catch. Understanding this, dolphins tend to circle the weak and the calves among them, and they aggressively attack anything that comes anywhere near them.

The primary weapons of a dolphin include its long bony snout, powerful flukes, and tail. Despite their enormous size and weight, dolphins are capable of swimming at speeds up to 30kmph. Imagine a dolphin weighing 200kg swimming at a speed of 25kmph hitting a shark with the end of their snout.

The impact would be more than the force of a shotgun blast at point-blank. That’s more than enough force to rupture a shark’s gills or liver.

Dolphins are intelligent species when a group is alerted of an imminent threat from a shark they will position themselves a few yards away from the shark. They will then burst upwards with full force ramming their snout onto the underbelly of the sharks causing severe internal injuries for the shark.

Is it true that sharks do not come anywhere near a group of dolphins?

You might have heard many surfers claiming that there will not be sharks anywhere near dolphins. But it is not the case, and it is just a misconception.

According to shark experts, it is nothing more than a myth. Shark experts claim the opposite; they say that chances of finding sharks near an area where a group of dolphins is swimming are too high.

It is essential to understand that both sharks and dolphins go to the same spot to hunt for similar species of fish.

The whole idea of sharks not coming anywhere near a group of dolphins stems from another myth that dolphins and sharks are natural enemies. But that is not the case because sharks hunting down dolphins has got nothing to do with hostility; instead, sharks hunt dolphins for the fat content in their body.

Though sharks indeed eat dolphins, that doesn’t mean they always end up having tussles. As mentioned in the earlier sections, scientists have observed sharks and dolphins hunting in the same waters while both of them minding their own business.

So the next time you go surfing, don’t go meet dolphins hoping to avoid sharks. If you are seriously worried about sharks, other safety measures can be taken.

Do dolphins use sound waves to defend themselves?

Yes, dolphins indeed use sound waves to defend themselves from deadly shark attacks. It is interesting to note that dolphins are capable of concentrating the sound pulse of high energy to a small area.

They generally use these tactics to stun or kill smaller prey. It has been found out that a bottlenose dolphin can concentrate a sound pulse of 230 dB at a distance of 1m.

Though dolphins use these techniques to locate their prey or kill smaller prey, they are also found to use this to ward off more massive sharks without physically confronting them.

So when dolphins spot a shark preparing to attack, they normally concentrate this sound pulses to a sensitive area of a shark; for instance, the organs in the nose of a shark.

It is going to cause sharp pain, and the electrical and sensory organs on its nose cease to work. In a usual scenario, this is more than enough for the shark to turn back from the dolphin.

Only when this doesn’t work, the dolphin uses its powerful snout to ram onto the shark’s body. 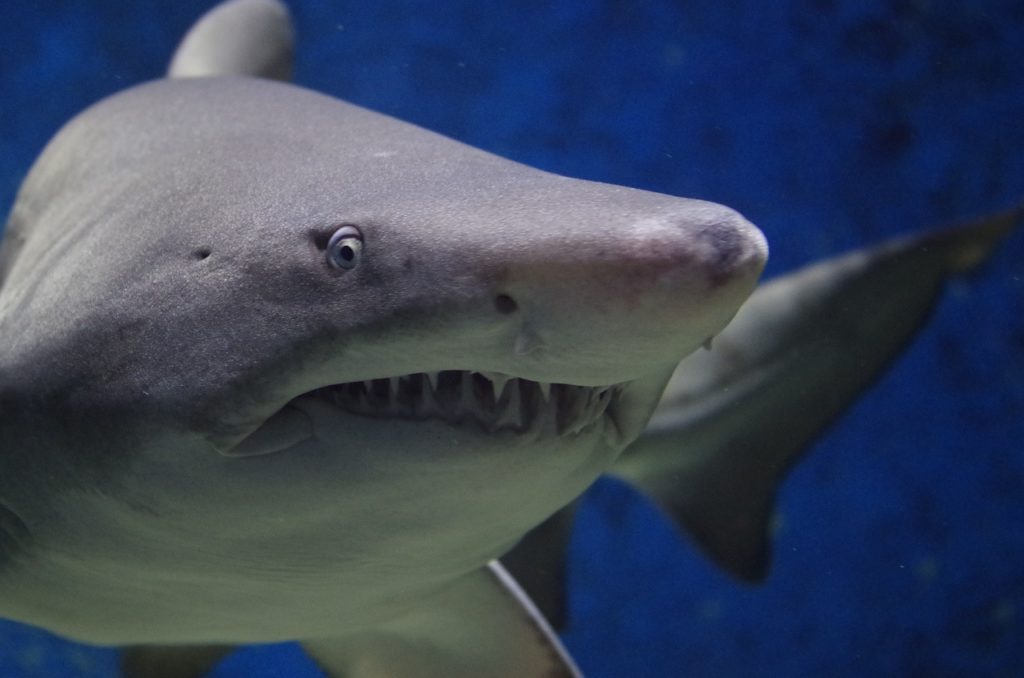 Yes, dolphins do hunt and kill sharks. Dolphins do this for mainly two reasons

The biggest species among dolphins, the orcas are found to kill sharks that are smaller in size for feeding. These dolphins don’t go around hunting the great white shark, Tiger sharks, Mako sharks, and so on.

Another case is when a shark attacks a calf or an old dolphin in its group. In such cases, dolphins are found to protect them at any cost, even if that means killing the shark.  There have been many cases where sharks have been killed by dolphins.

Do all sharks eat dolphins?

All sharks, in general, eat dolphins. The reason why sharks love feeding on dolphins is because of the high-fat content in them. Though every shark feed on dolphins, the most common ones are Tiger sharks, great white sharks, and bull sharks.

Is it true that sharks are afraid of dolphins?

You can’t say that sharks are afraid of dolphins, but yeah, sharks tend to avoid dolphins.

There have been cases where scientists have seen dolphins and sharks fishing on the same banks close to each other.

When it comes to a shark, though the fat content in the dolphins’ body is tempting, it’s not worth taking the risk for.

Compared to the sharks, dolphins are more agile and have a thick and powerful snout that can land a deadly blow to the sharks. So yeah, sharks tend to ignore dolphins in general.

Is it true that dolphins save humans from shark attacks?

Though this is true, you can’t take it for granted. In most cases, dolphins behave differently; sometimes, they may help you. Sometimes they may flee the situation are sometimes, and they may simply witness whatever that is happening.