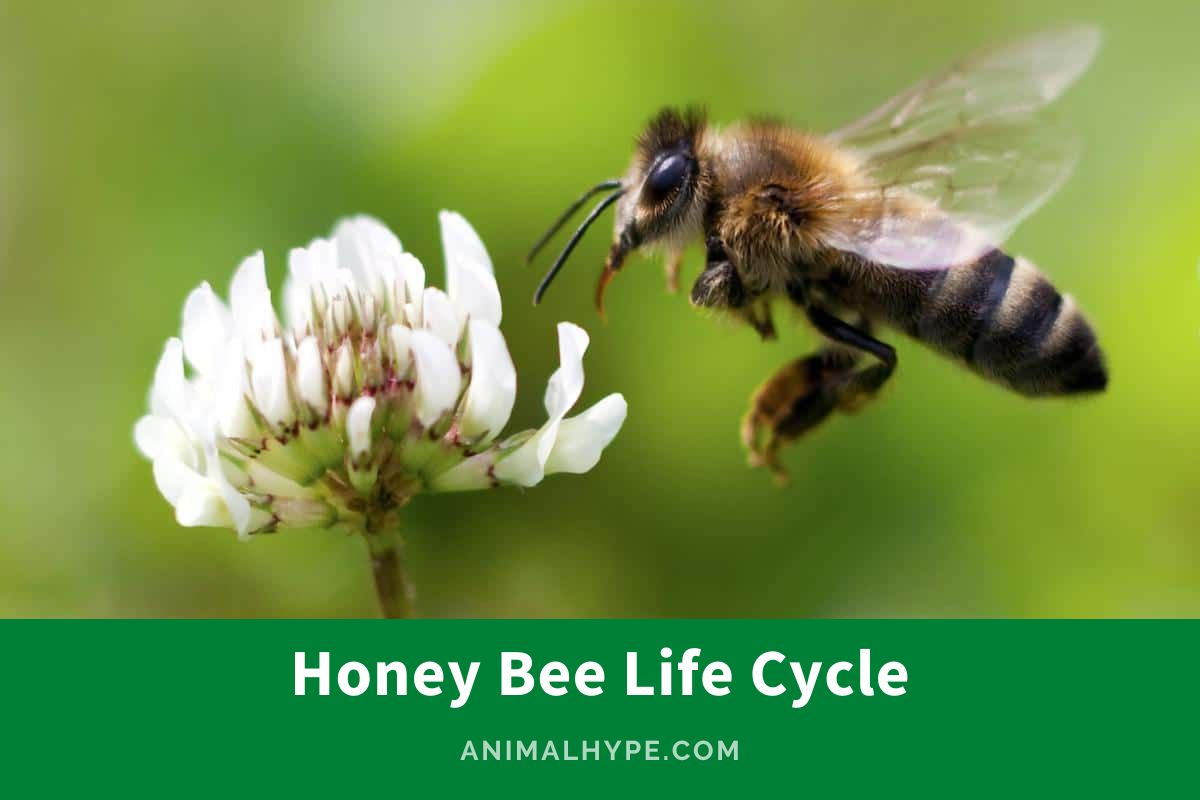 Honeybees are one among the few insects that are domesticated for its enormous economic value.

In this article, we will discuss in detail the different stages in the lifecycle of a honeybee.

Similar to other members of the insect family honeybees have four distinct stages in its lifecycle viz; egg, larva, pupa, and adult. The total development time in the case of honeybees significantly differs depending upon the class of the bees. It takes 24 days for drones, 21 days for worker bees, and 16 days for queens for complete development.

Before we dwell into knowing more about the life cycle of bees, let’s have a quick look at the different classes of bees in a colony.

Now that you have a basic idea on the carious class of bees inside the beehive let’s discuss their life cycle.

Similar to other members of the insect family honeybees start their life cycle as eggs. Among the honeybees, only the queen mates with the drones (male bees) and lay eggs.

If you have a closer look at a beehive, you can see that there are thousands of hexagonal shaped cells in it. It is in these cells the queen lays eggs.

The worker bees are responsible for building these cells and cleaning them without leaving a spot behind. The queen, when it’s time to lay eggs passes over each cell and lays an egg on each cell, provided the cell is clean without a spot. Honeybee eggs are less than 1.7mm in size and hence are difficult to for us to see with naked eyes.

Inside the beehive, there are three different sizes of cell one is the largest (queen-size) made for eggs that are going to be queens. The second one is smaller (Worker size) than the queen size; this one is for the workers.

The third one is bigger than the size of worker cells but lower than the queen size; this is the cell for the drone bees.

Inside a beehive, it’s the working class that balances the number of queen bees, worker bees, and the drones. They do so by building smaller cells for female worker bees and more giant cells for male drone bees.

When it is time to raise new broods the queen bee moves through each cell and lays an egg on each cell depending on the class, it was built for.

The queen lays eggs in such a way that the eggs stand upright position (standing on end) at the bottom of a cell. Under normal circumstances, the eggs will hatch in 3 to 4 days.

The eggs in the cells hatch within 3-4 days under normal circumstances. Among the hatched eggs, the healthy larvae are snowy white and resemble small grubs curled up in the cells.

These tiny larvae though helpless, have a voracious appetite than the adults. It is the duty of the worker bees in the colony to feed them. Each larva will be supplied almost 1,300 times a day!

The larvae are fed by a particular class of worker bee known as the ‘brood nurses.’ These brood nurses feed the larvae food made from pollen, honey, and secretions from the brood nurses.

During this stage, each larva will be fed a whopping 1300 meals a day. All eggs are not fed equally. The potential queen eggs are fed ‘royal jelly,’ a much nutrient-rich food.

These larvae are fed so much as a backup to survive when they reach the pupal stage. During the larval stage, fat bodies are built up that can store lipids, glycogen, amino acids, and mitochondria bodies which help them survive in the pupal phase.

Within 4 to 5 days after hatching these larvae becomes 1,570 times larger than their original size. It is then the worker bees seal the cells with porous beeswax.

The larva inside the sealed cells spins a cocoon around its body and undergoes a metamorphosis. Duration of a pupa phase is not the same for all the three classes of bees; it is shorter for the queen, longer for the worker bees, and most extended for the drones.

When in the pupa phase, they cannot be fed by the workers. They survive on the stores of the fat bodies that are built up during the larval stage. The stored lipids, amino acids, and glycogen in its body fuel the continued growth of the developing pupa.

Most parts of the adult bee such as wings, legs, abdomen, internal organs, and muscles form while being in the pupal phase.

Other notable morphological changes that happen in the pupal phase are

The pupa completes metamorphosis in around 20 to 21 days the bees chew their way through the wax capping to join the colony.

It is important to note that the newly hatched bees do not immediately leave the hive; instead, they wait for three to four hours inside the beehive for her skin to harden.

Once the bees emerge from the closed cell they must eat to survive. These young bees are found to spend the first two to three weeks inside the hives helping the worker bees in carrying out the routine tasks.

These young bees help the workers feed and clean the larvae, clean the hive cells, build comb, guarding, patrolling the hives and its surroundings, collecting pollen from the foragers, and storing, curing, and packing the pollens.

Three weeks after emerging from the cocoon, these bees lose the glands that produce larval food and wax, and finally, it becomes an adult bee.

Once the bees complete its pupal phase and emerge as an adult, depending upon their class, they have different routines and lifestyle. An interesting thing to note about a colony of bees is that a single queen rules her workers and drones.

Worker bees primarily have three tasks that are to build hives and take care of the larvae, to forage for food and to defend the colony from enemies.

The drones are the male bees in a colony. The sole responsibility of the drones is mating with the queen bee, and that’s pretty much what they do.

When the existing queen dies or becomes unable to lay eggs, the worker ants nurture an egg that can be a potential queen.

Once the queen emerges, she mates with the drones in the colony. It is interesting to note that the drones when they mate with the queen leave their sex organs on the queen and dies in almost a few hours after mating.

The queen bee holds the throne of a colony of bees. It is the responsibility of the queen to ensure the sustenance of the colony of bees. For a colony to survive, the honey bee queen needs to lay an abundance of fertilized eggs (Which becomes the workers and potential queens).

The queen bee mates with the drones in the air, also known as the nuptial fight, and stores the sperms from the male for fertilizing the eggs. It is important to note that the queens can control the fertilization of her eggs.

Among the eggs, the fertilized eggs become the queens and workers while the unfertilized ones become the drones.
The queen lays eggs and packs them carefully together within the cells. She scrutinizes each egg before placing it into a cell. It takes less than a second for the queen to lay an egg.

A queen bee is capable of laying eggs at the rate of 1300 to 1500 eggs per day for a period of three to four years. As the queen ages, the sperms storage depletes, and the bee produces fewer eggs, and the egg-laying pattern gets distorted.

When this elder queen becomes unable to lay eggs, the worker bees start nurturing the next potential queen, and the cycle continues.

Life Cycle of a Lion

Life Cycle of a Housefly

Life Cycle of a Silkworm