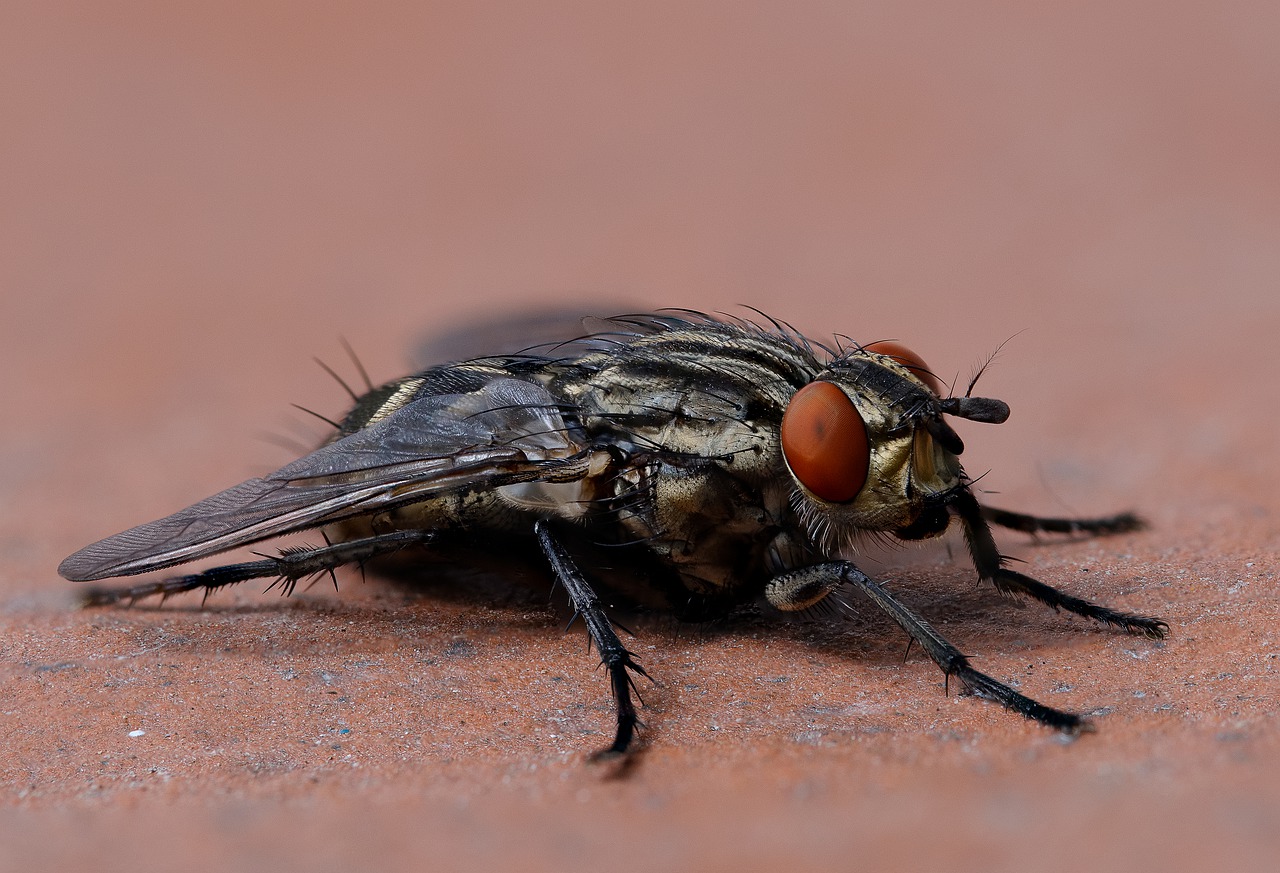 The housefly, also known as the common housefly is a very common sighting for people everywhere, except for those living in the poles. The irritating buzz, the tickling fly pass, the annoying crawling across your television screen, and what not? Houseflies are indeed an irritation for us humans.

Apart from that, they are the prime carriers of the contagious bacteria and other disease-causing microbes. Have you ever thought about where do they come from? Or how long do they live?

The life cycle of a fly is almost similar to that of other insects. Female flies lay eggs which then develop into larvae. The larvae undergo three stages of Ecdysis to become a pupa. These pupas live inside a protective envelope (cocoon) and undergo metamorphosis to transform into the housefly we see. The entire cycle between being a fertilized egg to an adult house fly spans only 7 to 10 days; however, flies have a small life-span of fewer than 3 weeks. Their incredible ability to reproduce ensures the thriving of their population.

The Life Cycle of a Housefly

In this article, we will discuss in detail the life cycle of the common housefly from the cradle to the grave. Let’s get going!

Flies reproduce sexually like the other members of the insect family. Once the male fly has fertilized the ova of the female, she is ready to lay eggs. The female flies are capable of laying 75 to 100 eggs in a batch and around 500 eggs in 3 to 4 days.

Houseflies are solitary creatures they don’t need nurturing from their mother to survive. The female housefly lays eggs in cracks or crevices where predators cannot reach and where there will be enough to eat upon hatching.

Housefly eggs need moisture to sustain, and hence the flies are seen to lay eggs in moist places. The optimum temperature for the eggs to hatch in 25 to 30°C.

Houseflies lay eggs primarily in masses on organic materials such as garbage or manure. Often, several flies will deposit their eggs close to one another, leading to large masses of larvae and pupae concentrated in one area.

While laying eggs, the females also deposit a semiochemical which attracts other carrying females to lay eggs nearby. This practice leads to clustered egg deposition.

Housefly eggs are white in color measuring 1.2mm in length and resemble individual grains of rice. These eggs hatch within a few hours and the larva emerges from it.

Stage 2: The larva or maggot

The eggs hatch in 8 to 20 hours and the larva emerges out of the eggs. The larvae once out immediately start feeding on the material on which the eggs are laid. These larvae are found almost to double up their size in less than two days.

Larvae that emerge out of the egg are 3 to 9mm long, creamy whitish in color and cylindrical in shape. They feed through the sectionless tubes with a hooked mouth. A distinctive feature of the larvae is the slightly raised position of the posterior spiracles & an oval black border surrounds the spiracular openings (Spiracles are the external respiratory opening seen in insects).

The nutrient-rich organic manure which they live and feed upon helps them multiply their size. Legless larvae from the egg can almost double its size in less than two days. Once it has become big, it undergoes the first molt.

Molting is a process common to many invertebrates through which a growing insect sheds its former exoskeleton and grows a new one.

The larvae undergo two more such molts emerging larger after each molt.

After the third molt, the skin of the larva gets harder than it was in the last two molts. The larva which has now grown enough, can crawl up to 50 feet to a dry, cool place near the breeding material and dig into the soil or their breeding material. They transform into pupas in these small holes and undergo metamorphosis.

Among all the breeding grounds for a housefly larva, the best ones are fresh swine and chicken manure. They provide the best conditions for their growth and are capable of drastically reducing the larval period, and producing larger pupas.

Cattle & horse manure isn’t a good breeding ground and is seen creating smaller cocoons. It is interesting to note that a fully composted swine manner which has a water content of less than 40% produces none.

The optimal temperature for larval growth is 15 to 38 °C though larval survival is highest at 17 to 32°C.

At optimum temperatures, the larvae take 4 to 13 days for complete development, and in 12 to 17°C they take around 14 to 30 days for full development.

Did you know that the housefly larvae play an essential role in the recycling of nutrients in nature?

Yeah, you heard me right. The ability of housefly larvae to feed and develop in a wide range of decaying organic matter might be the answer to battling the ever-increasing amounts of waste.

These housefly larvae if mass-reared in a controlled environment on animal manure can reduce the bulk of waste and reduce environmental risk. The maggots can then be used to feed fishes, for which maggots are a nutritious diet.

The pupa measures almost about 8mm in length. Its color, unlike the larvae, is not white. The skin color varies from yellow, red, brown, & finally to black as the pupa ages.

Even the shape of the pupa is different from the larva, with the pupa being bluntly rounded at both ends. That’s pretty much everything about the appearance of a cocoon.

The only difference between a fly emerging out of the shell and a housefly you commonly see is a visible bulge on their head. Unlike other insects, the flies don’t have teeth or jaws to chew its way out of the cocoon. This noticeable bulge known as the ptilinum acts as a pneumatic hammer to break open the cocoon shell.

The ptilinum is a fluid-filled sac that swells and shrinks alternatively acting as a pneumatic hammer. Once the fly is out of the pupae shell, the bump deflates back into the fly’s head.

The adult housefly that emerges from the pupa lives from two weeks to a month in the wild, or longer in laboratory conditions.

One can say that the fly once out of the pupa shell stops growing. The small flies you see are no different from the bigger ones. The fly being little is instead the result of getting insufficient food during the larval stage.

There are quite a few morphological differences between male and female house flies.

The male and female house flies attain sexual maturity 16 & 24 hours after emerging from the pupa, respectively. The adult house flies in the wild lives only up to 2 weeks, so reproduction is essential to ensure the sustenance of the species.

Female houseflies that are sexually mature produces a pheromone (Z)-9-tricosene to attract potential mates. This pheromone is not released into the air; instead, the male house flies smell it only when they come in contact with females.

(Z)-9-tricosene, the pheromone produced by the female flies are a suitable pest controller. It is widely used to lure in & kill the male flies, and it is environmentally friendly too.

Houseflies are seen to mate in the air and on the ground. Male houseflies’ initiates mating mate by bumping into the female, known as a strike. When the male flies come in contact with the female it smells the (Z)-9-tricosene (If the female is sexually matured).

If the female is receptive, a period of courtship follows. The female fly begins to vibrate her wings (as an indication of being receptive), and the male gently strokes her head. The male fly then moves to her abdomen where the female ovipositor is situated. The female pushes her ovipositor into the genital opening of the male and spermatic fluid is deposited in the female.

Female houseflies mostly mate only once in their lifetime while the male mate several times. The females usually store the spermatic fluid in them and use it to fertilize her eggs later. This phenomenon explains how a female can lay eggs five to six times in one lifetime.

I hope by now you might have a clear picture of the lifecycle of a housefly!