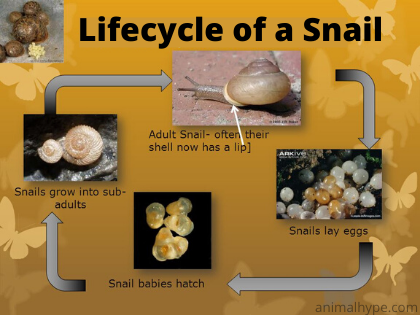 A “snail”, is not the scientific name assigned to this fascinating but vulnerable creature. “Snail” is a loose term to refer to the thousands of species of shelled “gastropod”. For the sake of this article, we referred to shelled gastropods like snails and their counterparts, without shells as slugs.

As the title suggests, we will be looking into the lifecycle of the snail, but we have taken a more generic approach as there are thousands of species of sea snails, freshwater snails, and land snails with varying characteristics, unique colors and life cycle.

In layman terms, the life cycle of a snail can be defined as the period from birth till its death. If we wanted to be pedantic, the definition of the lifecycle from the Collins dictionary is as follows:

The lifecycle of an animal or plant is the series of changes and developments that it passes through from the beginning of its life until its death. (Source: https://www.collinsdictionary.com/dictionary/english/life-cycle)

In turn, concerning the land snail, its lifecycle can be generally classified into the following stages:

We will look into the individual stages of the life cycle of the snail but would like to start with some basic trivia on this fascinating creature.

Snails are second, only to insects, in the overall number of species in the world. They are found in diverse habitats, including gardens, woodland, deserts, mountains, rivers, lakes, and very deep parts of the ocean, always finding ways to adapt to its surroundings.

Snails vary in size, color, and characteristics, which reflect their ability to adapt. However, many land species have somethings in common; that is, a large number are hermaphrodites. Any single snail may have both male and female reproductive organs.

Snails cannot hear, so the attracting of partners to copulate with depends on touch, and many species use chemicals to attract others ready to mate.

A snail’s shell continues to grow throughout its life, and they tend to have circular markings that can be used to determine the age of an individual snail. Commonly, the land species are known to retract its entire body into the shell for protection.

In many cultures around the world, snails are considered a delicacy, with the most popular dish being escargot in France, with the rearing of snails to cater to this niche market is still practiced. Some countries have been known to eat the eggs of certain species of snail, such as one would with caviar.

Depending on the species, each snail may lay between 100 to 400 eggs.

In many cultures, snails are known to represent patience, while others consider snails a symbol of laziness. Both are representative of the snail’s low speed when moving.

For the sake of simplicity, we have been using land snails as examples and will continue to use that assumption when going into further details of snail’s lifecycle. However, it should be noted that the majority of known species are water-bound, such as in lakes and the ocean.

The life cycle of a snail 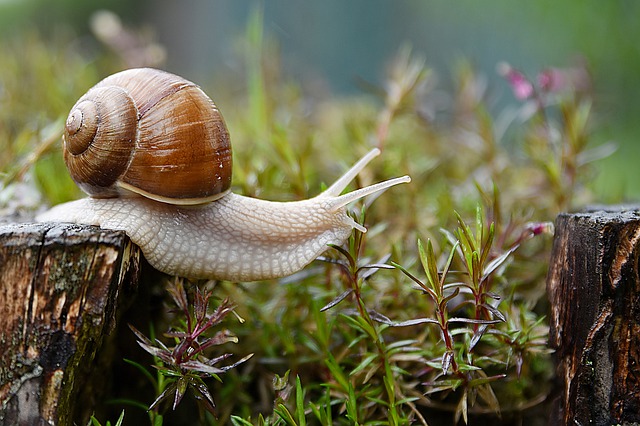 As mentioned earlier, shells of snails grow throughout their life cycle, and this process starts from birth. To ensure a healthy shell, snails require Calcium in their diet, and this is their first instinct on hatching, to consume the remains of the egg and even unhatched eggs.

Baby snails have soft shells and nearly transparent bodies that develop their color and unique characteristics as it grows. Growth is at a fast rate with most snail species, but their vulnerability when young, results in very few surviving the first year.

Land snails have been known to live up to 7 years, while this number may go up when reared in captivity.

As always, depending on the species of snail in question, they may reach sexual maturity anywhere between 6 weeks to 5 years. Once maturity is attained, snails tend to copulate with another individual rather than self-fertilize.

As always, these adaptable creatures have a few tricks which help them find a partner. In addition to using touch as a means to attract partners, they develop the ability to shoot “love darts” which is used just before mating.

These darts use chemicals produced by the snail to attract another individual that is ready to mate.

Snails aren’t picky and tend to go their separate ways after mating.

However, this promiscuity ensures the survival of their species, considering their natural vulnerability to numerous predators. Some snail species are even known to store sperm from previous partners for long periods. 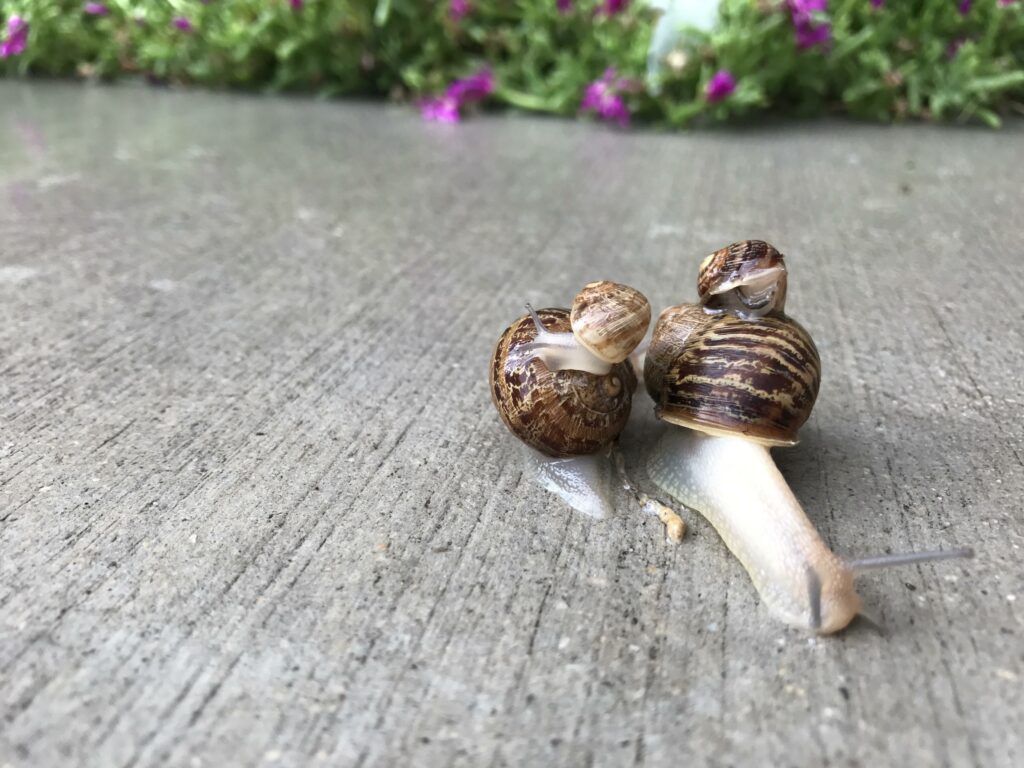 Mating involves copulation, which is done with the help of a penis-like organ. This organ is used to transfer sperm to the other individual, and eggs develop after fertilization.

As mentioned earlier, snails are hermaphrodites, which means that after a successful mating, each snail may lay a set of eggs, thereby increasing the chances of survival.

Like everything they do, the mating process of snails is a slow one, which may take up to days.

The gestation period differs depending on the species. After mating, it may take a few days for eggs to develop. Eggs may take between 2 weeks to 1 month to hatch when considering land species.

During this period, their shell starts growing from inside the egg, although they are very soft and small at that point.

As mentioned earlier, eggs of snails may take a few days to develop after successful fertilization. The actual dropping of eggs takes a few days to drop, but to ensure maximum chances of survival, both individual snails may lay 100 to 400 eggs each.

With land species, the snails will tend to drop eggs into wet soil by digging with the help of their ventral foot.
The snail tends to dig holes about 2 to 4 inches deep, and the eggs have an added protection of a viscous layer.

Hatching of eggs would obviously depend on the number of eggs that survive up to that point. Most of the eggs do not hatch as they may be prey to predators or washed away with rain or other environmental conditions.

Eggs take anywhere between 2 weeks to 1 month to hatch. The baby snails are already growing before their hatched, and their nutritional requirements mean that the hatched eggs provide crucial Calcium to young snails.

After predators, environmental hazards, and even unhatched eggs being consumed by their siblings for Calcium – a very small fraction of these eggs actually reach maturity.

We have largely kept land species of snails as an example to describe the life cycle of these invertebrates. However, there are as many as 5000 species freshwater snails alone, and many more that prefer saltwater with seas and oceans as their preferred habitat!

Keep in mind, these are species that are known to humans, and there may be many yet to be discovered.

Some added information on species of snails that are water-based

Freshwater snails tend to lay eggs in clumps and attach them to stocks of plants found underwater to help protect them and increase the chances of survival.

Some freshwater snails may lay their eggs out of the water and after hatching, the young return to the water to live out the rest of their lives.

Some freshwater snails are asexual while having the common trait of being a hermaphrodite like land-based species. So, unlike many land-based species that prefer sexual reproduction, their freshwater cousins may fertilize their own eggs and do not require a sexual partner.

With many species, the two snails that mate and lay eggs tend to go their separate ways after the mating process. However, with certain sea-based snails, the babies that are laid in a nest nearby to their parents may stay in the area for up to 3 months before venturing out on their own.

On average, sea snails live up to 5 years, but under the right circumstances, they have been known to survive up to the age of 25 years!

These extremely adaptable creatures simply choose the best option available to them. So while some species are hermaphrodites and prefer sexual reproduction with a partner, they may self-fertilize if a partner cannot be found, thereby ensuring the survival of the species under difficult circumstances.

Life Cycle of a Housefly