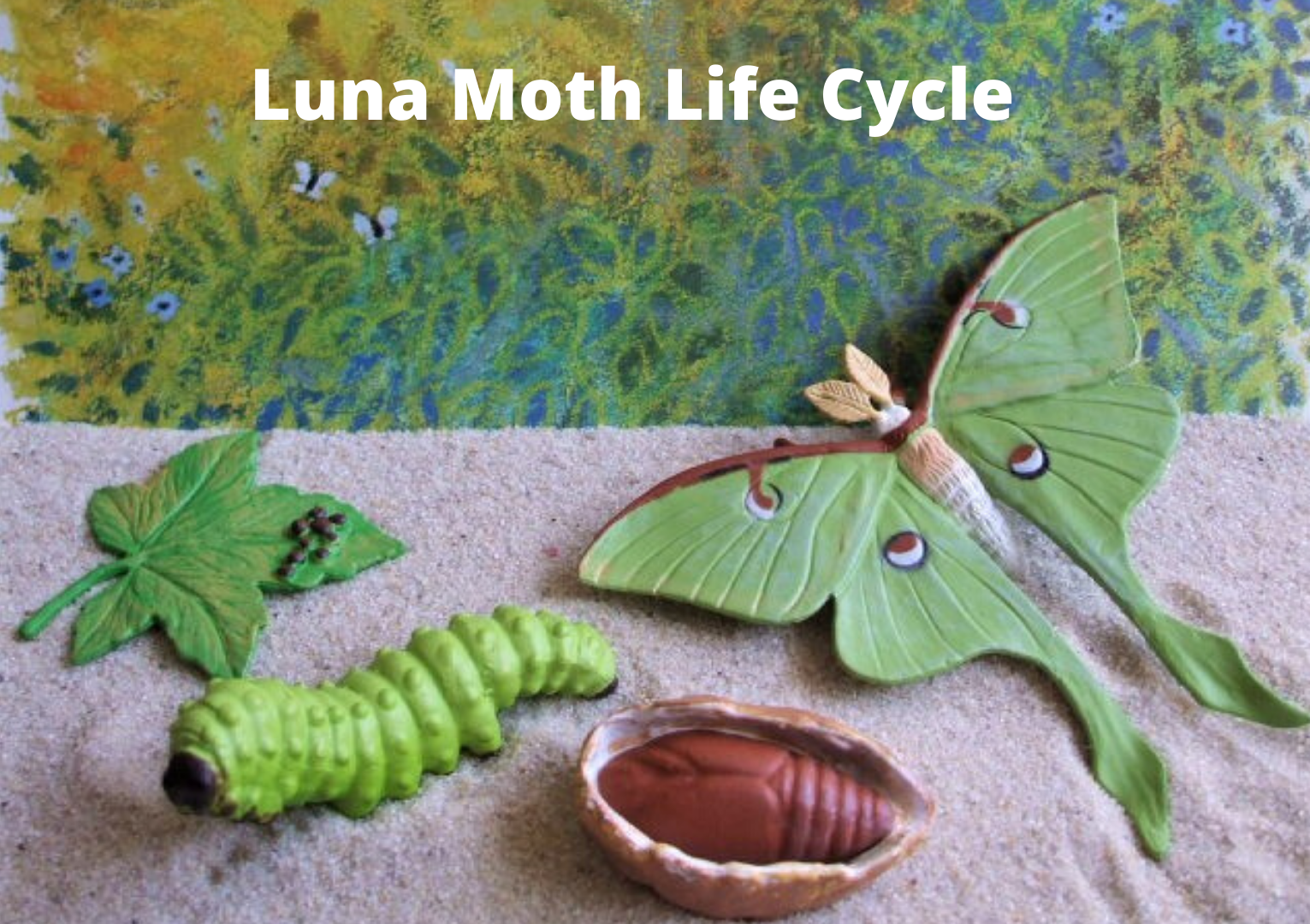 With large colorful wings and unique markings, Luna moths are beautiful species that often get mistaken to be a butterfly. Luna moths belong to the family of giant silkworm moths and are known for their lifecycle.

These magnificent creatures live only for less than ten days as a winged adult after spending almost 11 to 12 months for metamorphosis. It is for this very reason, philosophers and spiritual practitioners believe that Luna moths symbolize a lot of philosophical concepts.

Similar to the other members of the giant silkworm moth family, Luna moths undergo 4 stages of metamorphosis, namely the Egg, Larva, Pupa, and the winged moth. It all starts with an egg that hatches in almost 10 to 12 days. The larva that emerges from the egg goes through 5 instars before it is ready to pupate. Depending on the climatic condition it may remain in the pupa phase for a maximum of 8 months before emerging as a beautiful winged moth. In its final stage as an adult Luna moth, it lives only for less than 10 days.

In this article, we will have a detailed look into the different stages in the life cycle of a Luna moth, their metamorphosis, their life as an adult, and a lot of other interesting facts about them.

It can be said that the sole purpose of the life of an adult Luna moth is to reproduce. As mentioned in the previous section, Luna moths live only for less than 10 days, which means them capable of reproducing shortly after they emerge from the cocoon.

Luna moths mate only during the night because they are the most active during that time. The female Luna moth releases pheromones at night that attract the males, and the mating begins. In most cases, it is interesting to note that if left undisturbed, the Luna moths can remain in the same position till the next day evening.

Once the female has received sperms from the male she flies away while fertilizing her eggs internally. The female Luna moths find suitable leaves that the larva can eat and lays the eggs on the underside of the leaf. The female lays a cluster of 150 to 200 eggs which hatches in 8 to 13 days.

Now that you have an idea of how luna moths mate, let’s have a look into their life cycle.

Life Cycle of a Luna Moth

A luna moth goes through 4 different stages in their lifetime. They start as an egg from which they emerge as a larva, and it pupates. By the end of the pupal phase, if the environment is suitable, the adult winged moth arises.

In this section, we will have a look at these four different stages and discuss some interesting facts about them.

After a successful mate, the female moths lay a cluster of 150 to 200 eggs on the underside of leaves from the next evening.

The eggs are slightly oval in shape and are white in color. It is important to note that the cluster of eggs is mottled with a brown and sticky adhesive.

The leaves on which the eggs are laid varies from region to region. Most commonly, host plants are white birch, walnut trees, sweetgum, and so on.

As mentioned the adult moths do not live long and it can be said that the sole purpose of their life is to reproduce. After a successful mate, once she has laid her eggs she will fly off and most probably die in a couple of days.

The eggs hatch in almost 8 to 10 days and the larva emerges. Larvae can grow anywhere up to 3.5 inches long and are bright green in color with a brown colored head.

As mentioned in the previous section the eggs are laid on the leaves which the larvae can eat. The larval stage can be considered the most crucial part of the Luna moth’s entire life.

The adult Luna moth does not have a mouth and it does not eat anything during the 10 days that it lives. The energy needed during the adult stage is stored in the form of fat during the larval stage, which is why the larvae keep on eating without taking a break. All that they do is to eat and poop.

Each larva undergoes 5 molts before they begin to pupate. Depending upon the availability of food and climate, each instar (the period between 2 molts) may take anywhere between 4 to 10 days. After every instar before the larva begins to molt a small amount of silk is placed on a major vein of the leaf. With each molt, they leave their old exoskeleton behind which they consume.

Each instar is green, with the first 2 having a slight variation. Some larvae after the first two instars may have black spots on their dorsal side. By the time the larvae finish the last instar, it must have grown to approximately 70mm to 90mm in length.

The final instars dwell mostly on trees and only come down to the ground when it is time to pupate.

The pupal phase is the most active stage of a Luna moth in its entire life cycle. If you have ever seen a Luna moth cocoon you might have felt them moving inside the cocoon. The days spent in the pupal phase depends on the environmental condition. Under normal weather conditions, the pupal stage will be over in 2 weeks but that is not the case in winters.

During winter seasons the pupa inside the cocoon may enter a state of dormancy and it may take up to 9 months for the pupa to come out of the cocoon as an adult Luna moth.

When it is time for the pupae to come out of the cocoon it releases a protein-digesting enzyme that weakens the silk threads. Apart from this, there are chitinous spurs in their forewings which they use to make a hole in the cocoon through which the adult Luna moth comes out.

When the winged Luna moth emerges from the cocoon its abdomen will be swollen. This is caused due to the accumulation of hemolymph (insect blood) in its belly. During the first few hours, this hemolymph is pumped to different parts of its body including wings.

These Luna moths need to wait for 2 to 3 hours for its wings to dry and harden before it can actually fly. Once the wings are hard and dry, they fly off in search of a mate. As mentioned in the previous section, the sole purpose of an adult Luna moth is to have a successful mate.

The adult Luna moths are nocturnal and are seen commonly during the night. These moths lack a mouth and they do not eat anything which is why they are not seen near flowers, unlike a butterfly.

Why do Luna Moths live only for a week?

As discussed in the previous section, Luna moth survives only on the stored fats from its larval stage. This stored fat is only enough to survive for a maximum of 10 days provided they do not dispense too much energy.

Much of the stored energy is dispensed for mating after which they almost exhaust their energy storage. Luna moths do not have a mouth and hence they cannot feed too which explains why they live only for a week or 10 days at the most.

What Do Moths Eat?