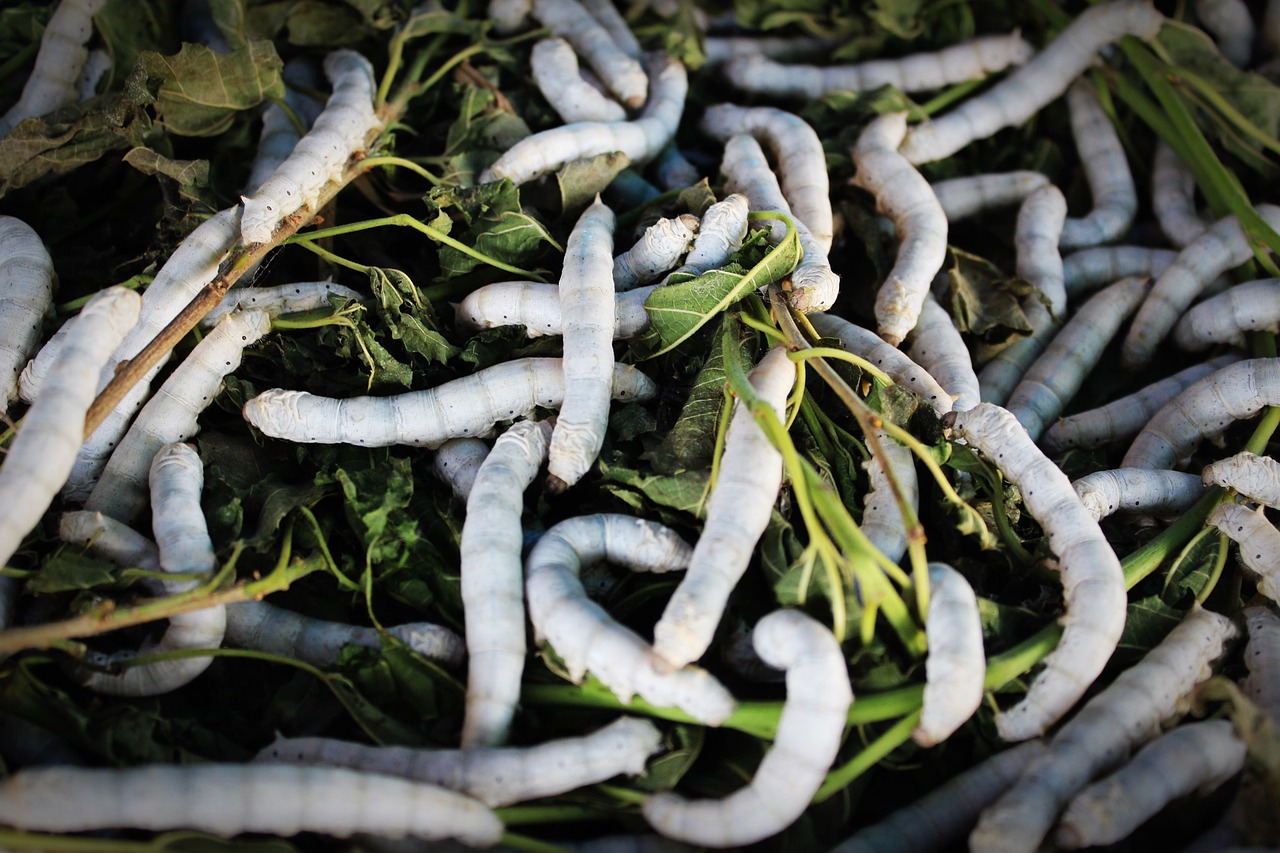 If you thought silkworms are worms, let me correct you. They are not worms as their name suggests; instead, they are the larva of the insect silkworm moth.

Silkworms are one among the small group of domesticated insects that have enormous economic benefits. The fiber produced by the worms is one of the most durable natural fibers found on this planet, and it finds its use in parachutes, blanked filling, surgical sutures, and even bicycle tires!

Let’s study the lifecycle of silkworm and learn about the different stages in its life.

The life cycle of a silkworm comprises 4 stages viz; egg, larva, pupa, silkworm moth. The life cycle of domesticated silkworms and the ones living in the wild are more or less similar. The only difference being the tamed ones have lost their ability to defend against predators and to forage on their own. In the case of domesticated silkworms, the larva develops into a pupa (inside the protective cocoon) and is not allowed to develop into a fully developed moth. Only a few are allowed to develop into a silkworm moth.

Are there any differences between domestic and wild silkworms?

There aren’t any genetic or morphological differences between domestic and wild silkworms. Still, the ones in the wild are more adaptive to nature compared to the domestic ones.

Domesticated silkworms are not anymore found in the wild. Through the ages of domestication, they lost their natural ability to hunt for food and to defend themselves from predators making their life expectancy very low if not given proper care.

The life cycle of the domestic and wild silkworm is similar except for the fact that silk is extracted from the domestic silkworms by killing them in the pupa stage. Only a very few pupas are allowed to grow into a silkworm moth.

The four stages in the life cycle of a silkworm 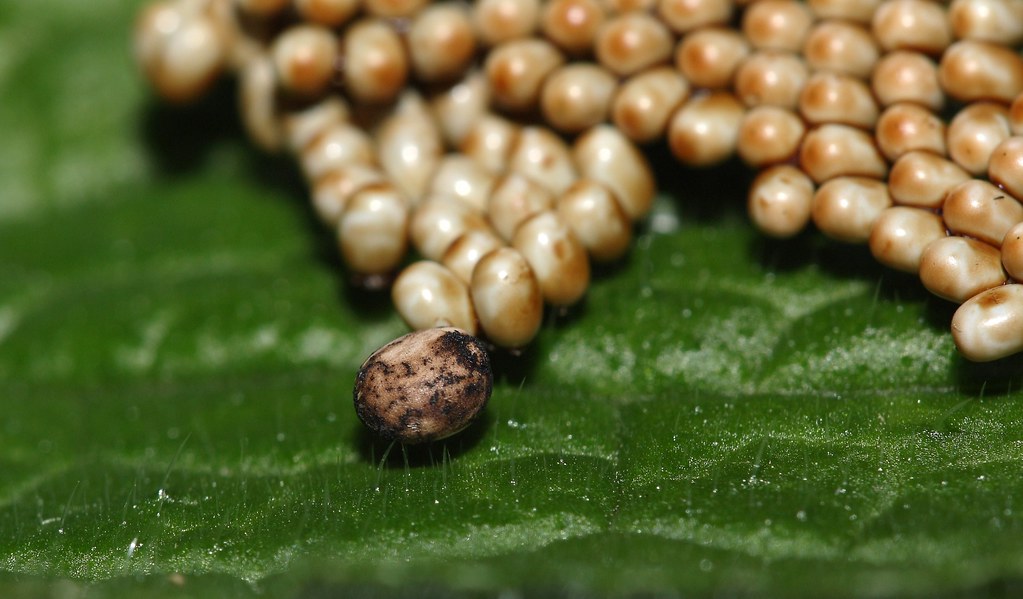 The egg is the first stage in the lifecycle of a silkworm. Silkworm eggs need warmth to hatch, which is why the female moth after mating, lays eggs during the end of summer.

Their eggs are tiny and have a solid structure resembling a poppy seed. It is inside this protective eggshell, the embryonic development takes place.

The eggs of a silkworm appear to be light yellow when laid. Once the embryonic development has taken place completely, it darkens to a bluish-grey.

These eggs, when laid by the end of summer, do not hatch until spring. It is the warmth that triggers the hatching of eggs. If the area in which the silkworm moth laid eggs is warm enough, the eggs will hatch in about ten days.

Once these eggs hatch, tiny silkworms covered in black hair emerges out of it. These teeny weenie worms once out of the eggs immediately start munching on the tender mulberry leaves (In the case of domesticated silkworms).

A healthy female silkworm moth can lay about 300 – 400 eggs in clusters after mating. It usually takes up to 24 hours for the egg-laying process to complete.

Mating and egg-laying happen in the final phase of the life cycle of a silkworm moth. During this phase, the female moth does not eat or drink and eventually dies. 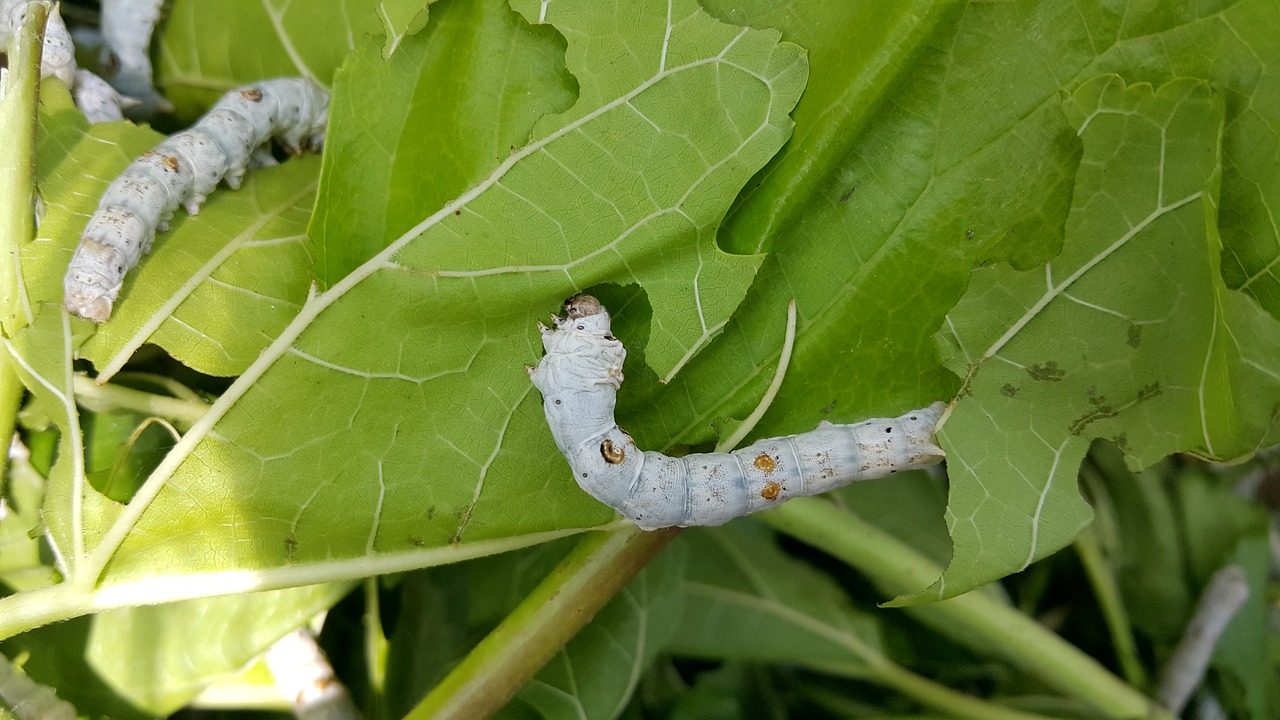 The larva is the second stage in the life cycle of a silkworm moth and lasts about 25 – 30 days. The silkworms after hatching measure about 1/8th of an inch and are incredibly hairy, and they feed on tender mulberry leaves.

These tiny worms from the hatched eggs pass through 4 molts within these 25-30 days. The period between 2 successive molts is called an instar. Before its first molt, the head of the worm will turn a bit darker than the rest of its body.

As they pass through these four molts, they begin eating the larger leaves too.

After each molt, these larvae sleep for 1-2 days before undergoing ecdysis (The process of shedding older skin). These four distinct stages are also known as four ages.

Among the four molts, the first one is the stage where the distinctive features of silkworm form.

Following the 1st molt, the hard skin and hairs on the worm shed, and they transform into a caterpillar with a soft and white color skin.

The larva of silkworm develops a horn at the back of its body following the 1st molt.

During stages 1 and 2, the larvae feed on tender mulberry leaves starting from the back and eat everything leaving nothing but the veins. Silkworms of age 3 eat continuously to gain weight; by the time it completes the age of 4, they will be fat and fluffy.

Once they reach age 4, these worms can move around freely and they start eating from the edges, and these worms eat the veins too.

It is during the age of four the silk gland in the chest of the silkworm fills with fibroin from the amino acids in the mulberry leaves. The age of 4 is the last phase of the larval stage.

These fully developed larvae stop feeding on the leaves and start weaving threads of silk around them, forming a cocoon. This phase is the beginning of the 3rd stage in their life cycle. 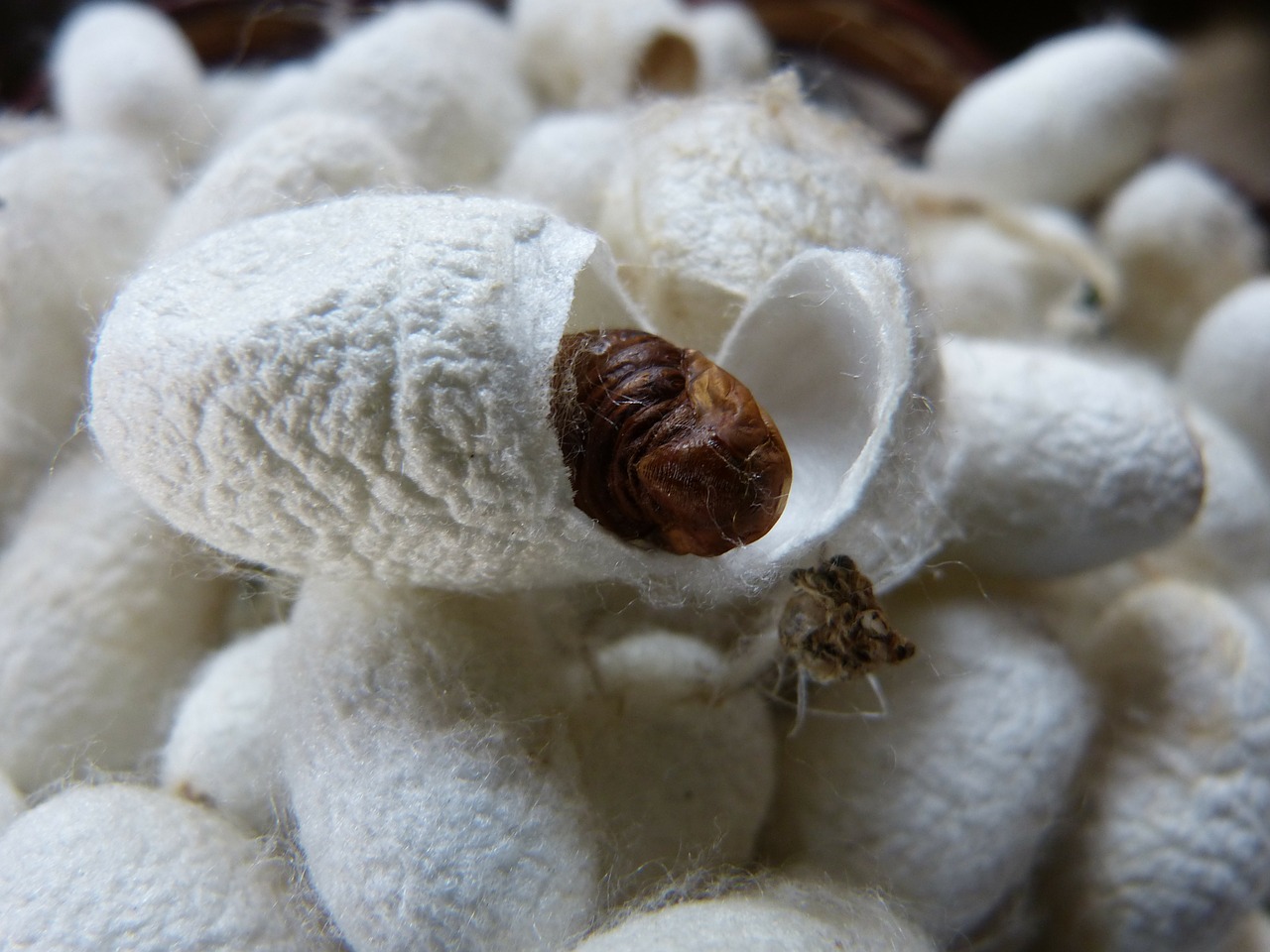 The pupa is the third stage in the life cycle of a silkworm moth. After the 4th molt, the silkworm appears slightly yellow, and its skin becomes tighter than it was in the previous stages.

During this phase, the larva spins a cocoon of silk fiber around it as a protective cocoon. The larva sheds one more time inside the protective envelope of silk to become a pupa which is lean when compared to the larva.

It is inside this protective cocoon the pupa undergoes metamorphosis to become a fully developed silkworm moth.
A silkworm can weave threads that can measure almost up to 1.5kms in length as single threads.

The color of the silk filament may vary with the diet of the larvae and seasonal influences.

Pupa inside the hardened cocoon undergoes metamorphosis to transform into a fully developed winged silkworm moth slowly. The development of distinct morphological features happens in the following order.

1. Transformation of the larvae into a pupa with hairy legs
2. Formation of a pair of compound eyes
3. Development of a couple of wings on either side of the chest
4. Formation of moth legs beneath the wings

Once fully developed into a moth, it secretes a yellow liquid called the lytic enzyme from its mouth which makes a hole in the protective cocoon shell. Through this hole, the fully developed moth finds its way out into the world. 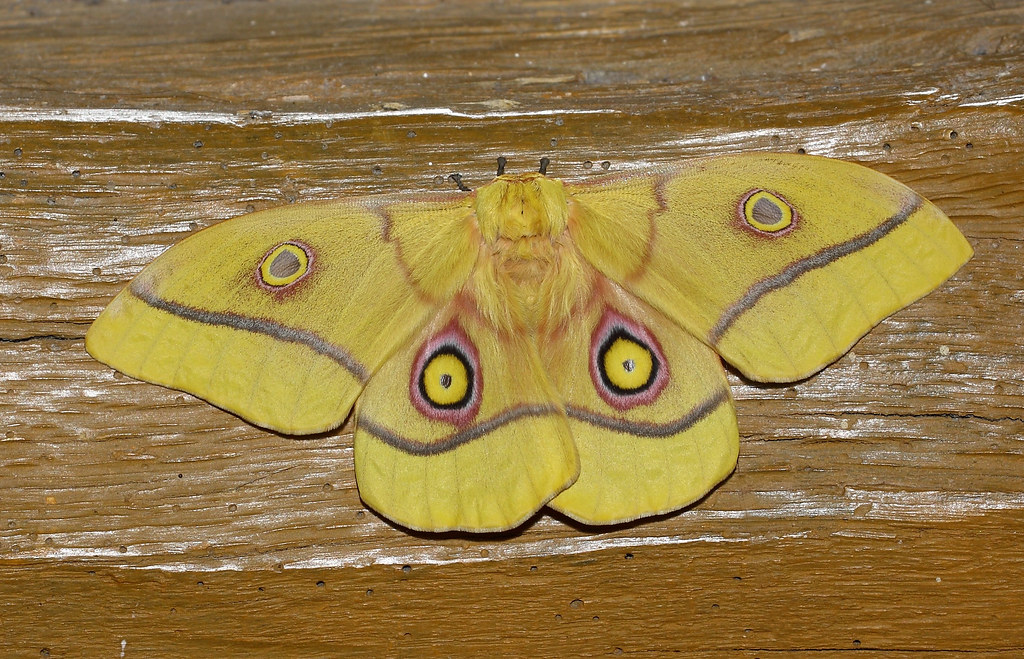 The silkworm moths are hairy creatures with a wingspan of 50mm in general. The male moths are smaller when compared to the female moths.

These adult moths though they have a pair of wings are not capable of flying. They also lack functional mouthparts and hence are unable to consume any food. One can say that their sole intention in this stage is to find a potential mate and produce eggs.

Silkworm moths have an inferior vision; their compound eyes are as useless as their pair of wings. To compensate for the reduced eyesight, the female moths secrete hormones that can attract their potential mates.

The male moths pick up the signal using their large antennas and follow it all the way to reach the female moth, and they mate. A healthy female can lay as much as 300 – 400 eggs after mating.

Extracting the silk for commercial purposes

Silkworms are domesticated widely because of their economic benefits. If the pupa is allowed to develop fully and break through the cocoon, the silk is rendered useless.

To extract silk from the cocoon, the cocoon along with the pupa encased in it is dipped into boiling water. By doing so, the pupa inside the cocoon dies, and the glue which holds the silk dissolves leaving behind long strands of silk.

This silk is then carefully reeled out from the water. Only a small number of cocoons are left out for the moths to break out to continue the population of silkworms.

What is peace silk or vegetarian silk?

The process of reeling out silk as discussed in the earlier section sounds a bit cruel, isn’t it?

Peace silk or vegetarian silk is the silk that is extracted from the cocoon without killing the moth inside. In this process, the moth emerges out of the envelope, and then the silk cocoon is degummed in boiling water.

Unlike the traditional practice, silk is spun like other fibers in this process. The silk made in this way is perfect for warmth and therapeutic uses.