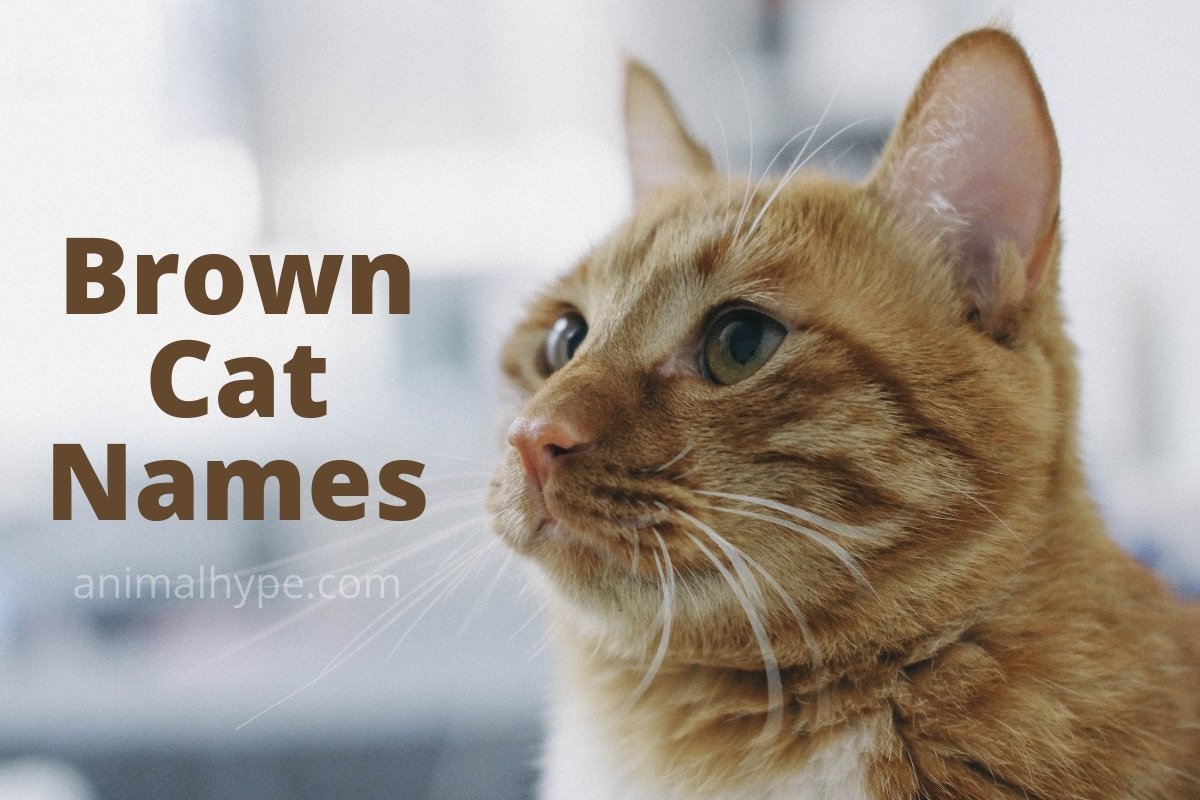 Cats with brown fur are not as common as those with white, black or orange fur. There are some breeds, like Havana brown cats and Burmese cats, that are entirely dark brown. These cats are extremely rare, and they’re one of the few breeds to have a solid brown color.

Havana cats have their distinct color because of planned breeding between domestic black cats and Siamese cats. What also makes Havana cats and a few other brown cats stand out is their bright green eyes, which contrast perfectly with their fur.

For those of you who are lucky to bring home a kitten of this breed or any brown cat for that matter, consider a unique name for them that helps make them stand out even more.

If you’re not sure where to start with the naming process, then here are some cute and funny names for brown cats you may like.

If your male cat has a brown coat, this category is one you’d want to consider, regardless of which breed your cat belongs to. Find your new cat’s name in this list of male brown cat names.

You should know that the color of the coat does not inspire all of the names. So, don’t hesitate to choose a name for another non-brown cat of yours.

Khaleesi: Khaleesi, also known as Daenerys Targaryen or the Mother of Dragons, is a character from the popular TV series and novel series Game of Thrones and A Song of Ice and Fire, respectively.

Now, we understand that Khaleesi had ashen-colored hair, but she did wear brown when she was part of the Dothraki. So, perhaps you’d want to consider this name for your little kitten.

Here’s a list of female brown cat names for your new kitty queen in the house. Yes, cats want to be treated like royalty in the house, but that’s part of their charm.

We’re sure that many pet owners wouldn’t mind giving their adorable pet cats a cutesy name. Perhaps you’re one such pet owner. Well, then here are some cute brown cat names that might pique your interest.

Calico cats are those with coat patterns that have a mix of two or three solid colors. These tend to appear in patches, and the most common color combination is white, black, and orange. However, there are some with the color brown, too. Here are some names for your adorable calico cat.

Do you want to flex your sense of humor in front of your friends and family? Well, maybe these funny brown cat names will help.

Tabby cats aren’t a breed themselves. They are striped cats with a coat pattern, with a distinct marking on their foreheads that look like the letter ‘M.’ This pattern continues from the cats’ face to its back and tail.

Furthermore, brown tabby cats may be a little hard to find. Most of them are gray with some tint of brown.

Do those details seem to describe what your tabby cat looks like? If yes, then take a look at the following brown tabby cat names.

Persian cats are known for their long fur and what looks like a flattened, but of course, cute face. These creatures come in a variety of colors, including white, black, gray, brown, and more.

In addition to that, these cats are known for being gentle and laid-back. If your Persian cat is brown and likes to chill for most of its day, then here are some names that fit the description.

Chewbacca: Even if you’re remotely aware of any of the Star Wars films or TV series, you will know about the character Chewbacca (or Chewy as Han Solo calls him). If you don’t, we’ll describe him like Mark Hamil (who played the one and only Luke Skywalker, of course) once did: a large hairy dog. And guess what? Chewbacca’s brown, too, like your cat.

As the name suggests, this cat breed originates from an area around the Thai-Burma border. These strong cats are extroverts and aren’t afraid of getting on their feet to do things.

You can also find Burmese cats in a completely brown coat.

Here are some brown Burmese cat names that you can choose from.

Tortoise shell cats have a combination of black and brown fur, among other dark colors. These cats are called torties for short and can have a mix of color in large patches or closely mixed.

Check out some of these black and brown cat names for your tortie.

You can find a patchwork of brown, orange, and black in tortoise shell cats and calico cats. Here is a cute name based on these colors.

Pumpkin: Now, we know that pumpkins are mostly orange, but one could argue that there’s a slight tint of brown in it, too. Perhaps that is also the case with your cat. If it is, then you have a cute name for it already.

Havana brown cats and Burmese cats are some of the few cats that have dark brown coats with no other color on them. If you’ve got one of these extremely rare cats, then these dark brown cat names are good choices.

The darkest colored eyes cats have is a rich copper color. Cats get dark-colored eyes because of the pigment called melanin, which is what the melanocytes produce. The more melanin, the darker the color of the cat’s eyes will be. This is also the case for its fur as well.

Tiger (or Tigress): Reddish-brown is one of the most common eye colors among tigers—the largest cats out there. If you have a striped cat, who’s chunky but agile, and has brown eyes, then name them after their big brother and sisters (we’re kidding, domestic cats and tigers are not the same).

Simba: Simba is the protagonist from the Disney animated and live-action films named the Lion King.

Simba is a lion who has a yellowish light brown coat, which is fitting for your light brown cat. If your cat is female, you could name your cat after another one of the main characters from the film, Nala. She’s smart and kind.

Mufasa: If you’d rather name your cat after the original king of the land in the film, the Lion King, then go for Mufasa.

Golden brown cats resemble orange-colored cats. This coat is common among Persian breeds. Take a look at some names inspired by the golden brown color.

Naming a new pet doesn’t have to be a taxing experience, and this guide on cute and funny names for brown cats can help. All of the names above aim to only steer you in the right direction. You can take inspiration from them and then come up with your own. Oh, and don’t be afraid to have fun while you pick a name!