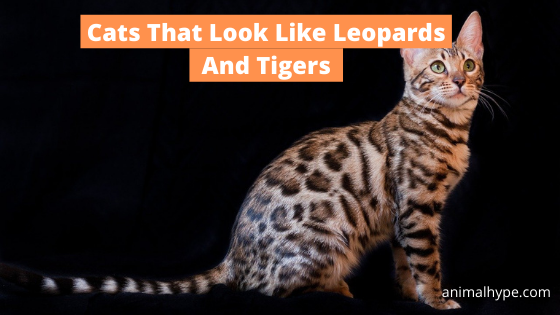 If you want to own a pet that is as royal as they come, cats are just perfect for you. Being the only member of the family of carnivorous mammals who can be domesticated, they are as graceful and agile as the rest of them. If we were to tell you that there are cat breeds who look just like the larger members of their family, what would you say?

In this article, we are going to tell you about 11 cat breeds who look like leopards and tigers. 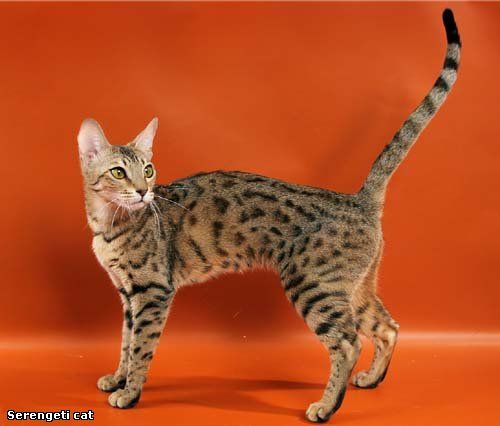 The Serengeti cat is a hybrid cat created by cross-breeding an Oriental Shorthair and a Bengal. Karen Sausman, a conservation biologist, created this breed to resemble the wild African Serval in 1994.

These cats have a medium-sized body with large, round-tipped ears, bold eyes, and a small, triangular face. Although they do not have wild blood in their veins, they look very much like leopards. This breed is also compared to the Savannah, another hybrid cat breed sired by the African Serval.

With a rich gold coloring and black spots, they are also believed to be one of the most decorative cats. These cats are great climbers and have sharp instincts. The International Cat Association (TICA) has recognized and registered them as a “developing breed”. 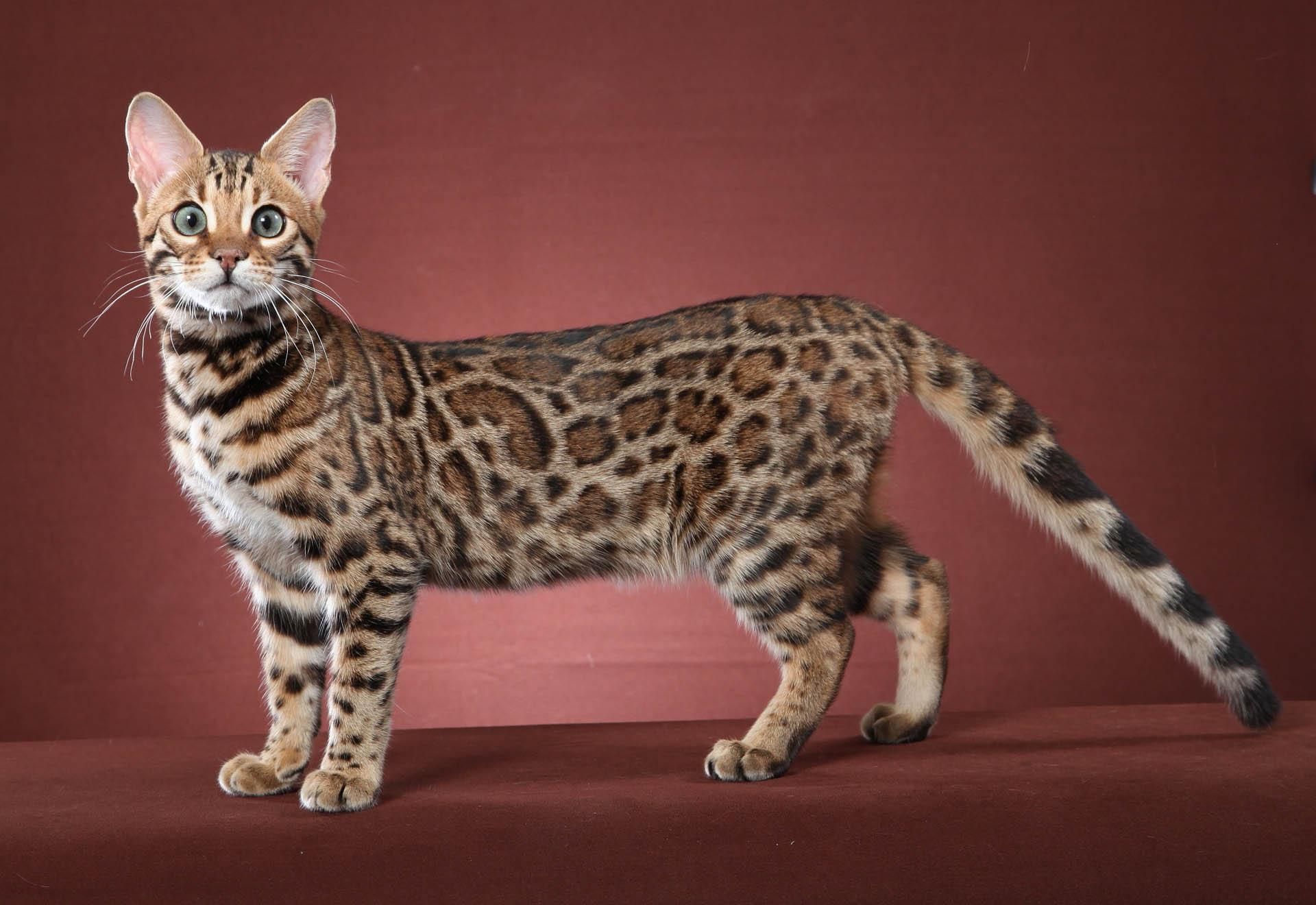 Originated in the United States of America, the Cheetoh cats are hybrids created by cross-breeding the Ocicat and the Bengal cats. This breed was created in 2001 by Carol Drymon who wanted to produce a domestic cat breed appearing just like a wild cheetah or leopard.

Cheetoh cats have a dull brown body with round spots all over it with a medium-sized tail. Although they might appear to be fierce and frightening, they are anything but. They make an excellent lap cat due to their gentle and loving nature.

They are highly sociable and enjoy the company of children, other cat breeds, and even dogs, who are believed to be the sworn enemies of all cats.

The males are not hostile in any way and display strong maternal feelings towards their younger ones, a trait they have inherited from the Ocicats. 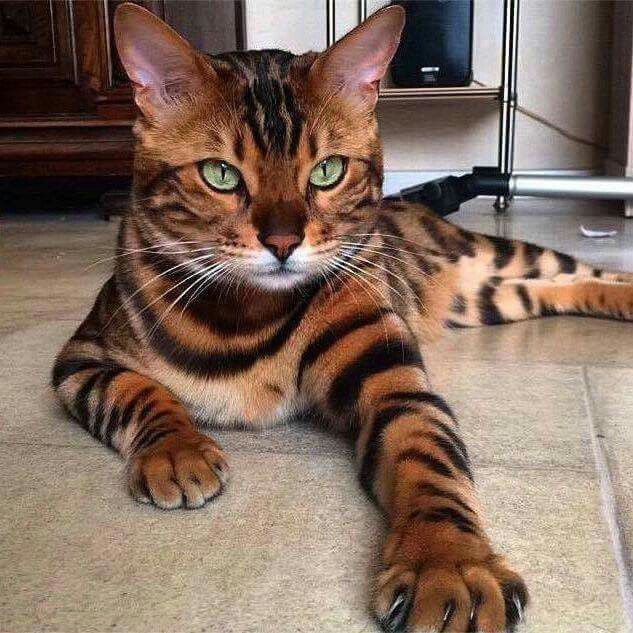 The name of the Toyger cats can be broken into “toy tiger”, because their breed was produced in the hope of creating such cats who closely resemble tigers.

Judy Sugden is the creator of this cat breed and admits that she created them in the 1980s in order to inspire others towards the cause of the conservation of tigers.

The Toyger cats gained recognition from The International Cat Association in 1990s, and were accepted as a championship breed in 2007.

They have a medium-sized body with a cylindrical muzzle on top of their heads, a long, thin tail. You can see tiger-stripes all over their body. Their skin is brown to tan with short and thick fur. Toyger cats are highly energetic and need a regular, extensive exercise in order to stay healthy. 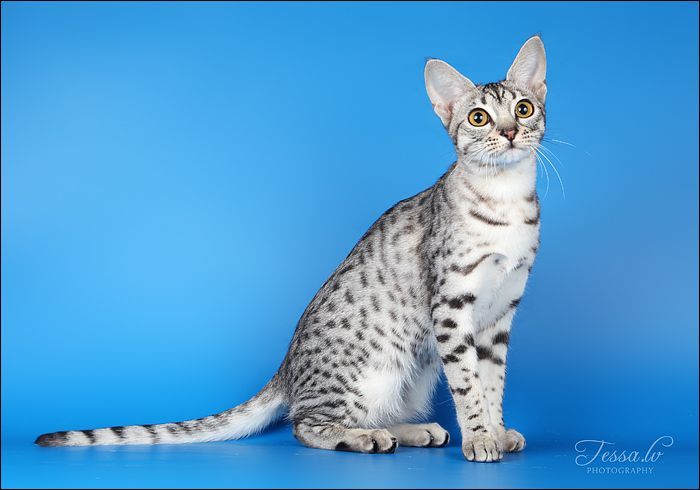 Although the Ocicats are spotted like the wild cat breeds, they lack the wild DNA and have a wholly domesticated temperament. They were produced by crossbreeding the Siamese cat and the Abyssinian cat but look more like Ocelots. Hence, they have been named “Ocicat”.

Virginia Daly is the creator of this cat breed in 1964. These cats have a large body, muscular legs, a strong paw, and ears tilted at an angle of 45 degrees. One of the most remarkable features of these cats is the thumb-print like spots present all over their body.

They have about twelve color variations, all of which have been approved by several registries, including The Cat’s Fancier Association, Inc. These cats, if trained properly, can walk on a leash, fetch, and respond to calls and commands. Therefore, they are often compared to dogs. 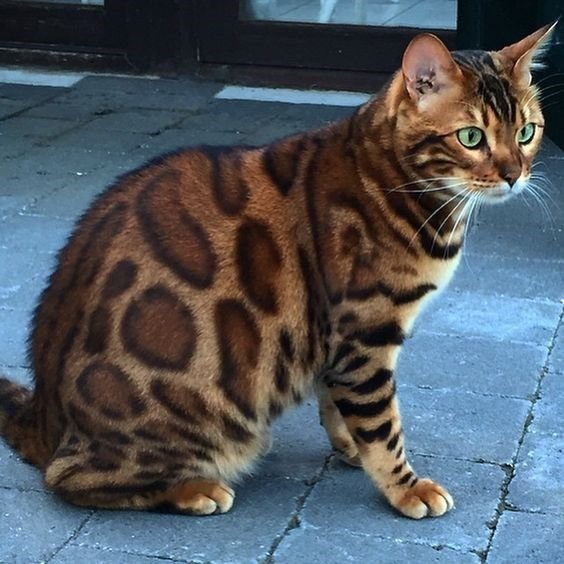 Created by the cross-breeding of domesticated cats, the Bengal cats look wild in appearance but have a domestic temperament. The parents of these cats are the Egyptian Mau and the Asian Leopard cats.

Jean Mill is credited for the creation of these cats. As far as Cat hybrids are concerned, the Bengal cats are one of the oldest breeds and have been mentioned as early as 1889, in the book “Our Cats and All About Them” written by Harrison Weir.

Bengal cats have a medium-sized body with patterns all over their bodies. There are many variations in their appearance, out of which the following have been recognized by The International Cat Association: 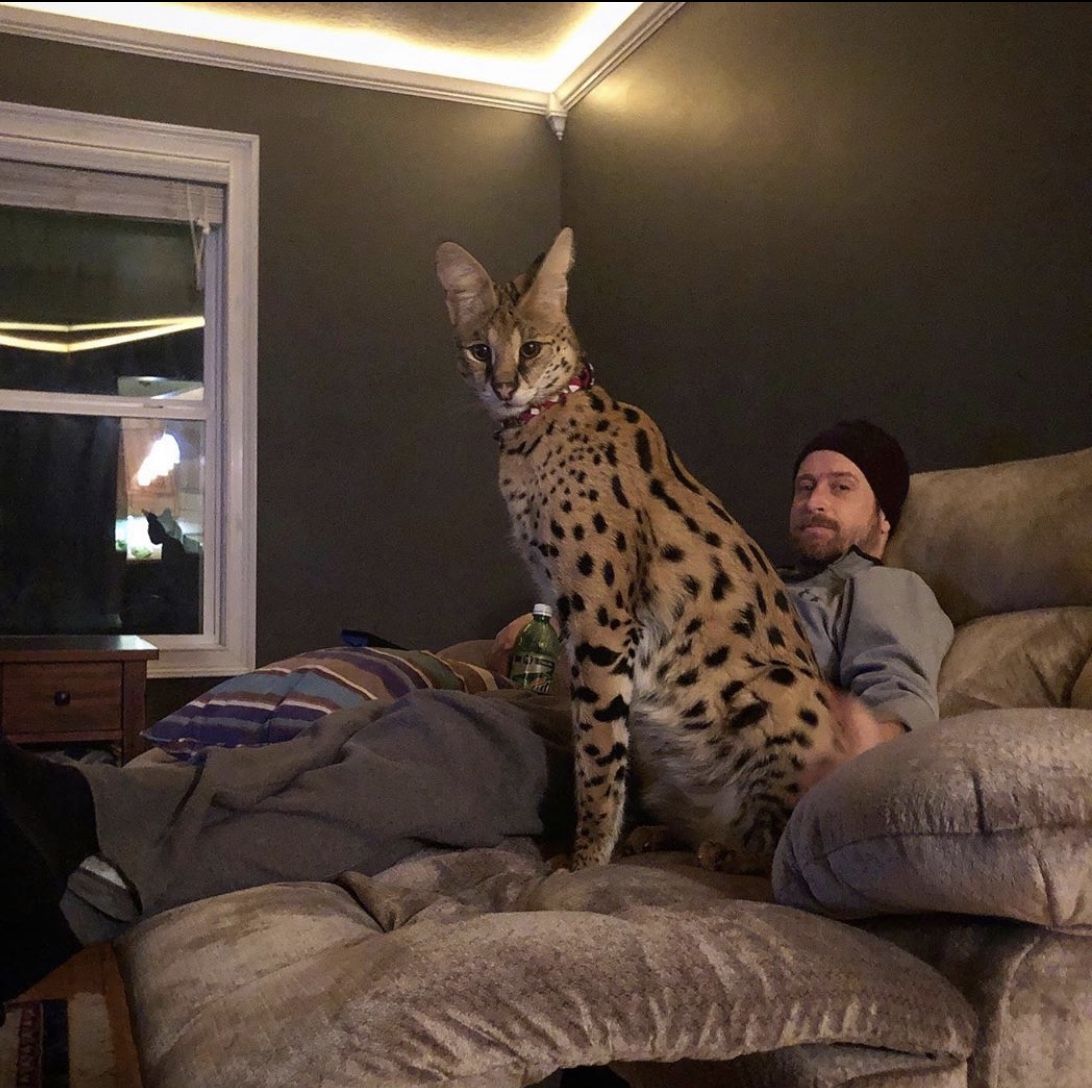 Weight – about 18 to 28 pounds
Lifespan – up to 20 years
Personality – Highly active, playful, and loyal

The Savannah cat is a hybrid cat breed originated by cross-breeding a domestic cat with the wild African Servals.

Bred in the 1990s, these are the largest cats in the world. In 2001, this breed was recognized and registered by The International Cat Association. About a decade later, in 2012, TICA registered these cats as a championship breed.

Savannahs are graceful cats who are popular for their loyalty and devotion. If you own a Savannah cat, you will find it following you everywhere you go. They can also be trained to walk on a leash or harness. Their behavior towards your neighbors or other animals varies from one cat to another. 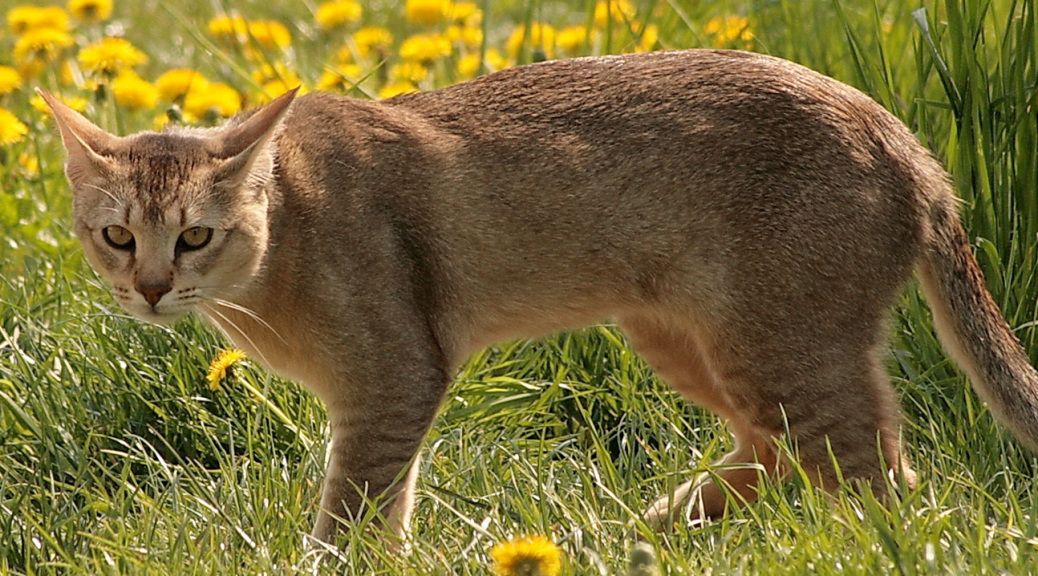 Chausie Cats have been produced by the cross-breeding of many domestic and non-domestic cat species. Although these cats are considered to be non-domestic among other domestic breeds, they acquire a complete domestic temperament by the fourth generation.

The International Cat Association (TICA) recognized them as a domestic breed in 1995. In 2013, they were recognized as a championship breed by TICA.

They have a long body with long legs and are built for running and jumping. Their ears are tall and stand atop their heads. They are very sharp, intelligent, and are capable of performing miracles if trained properly. 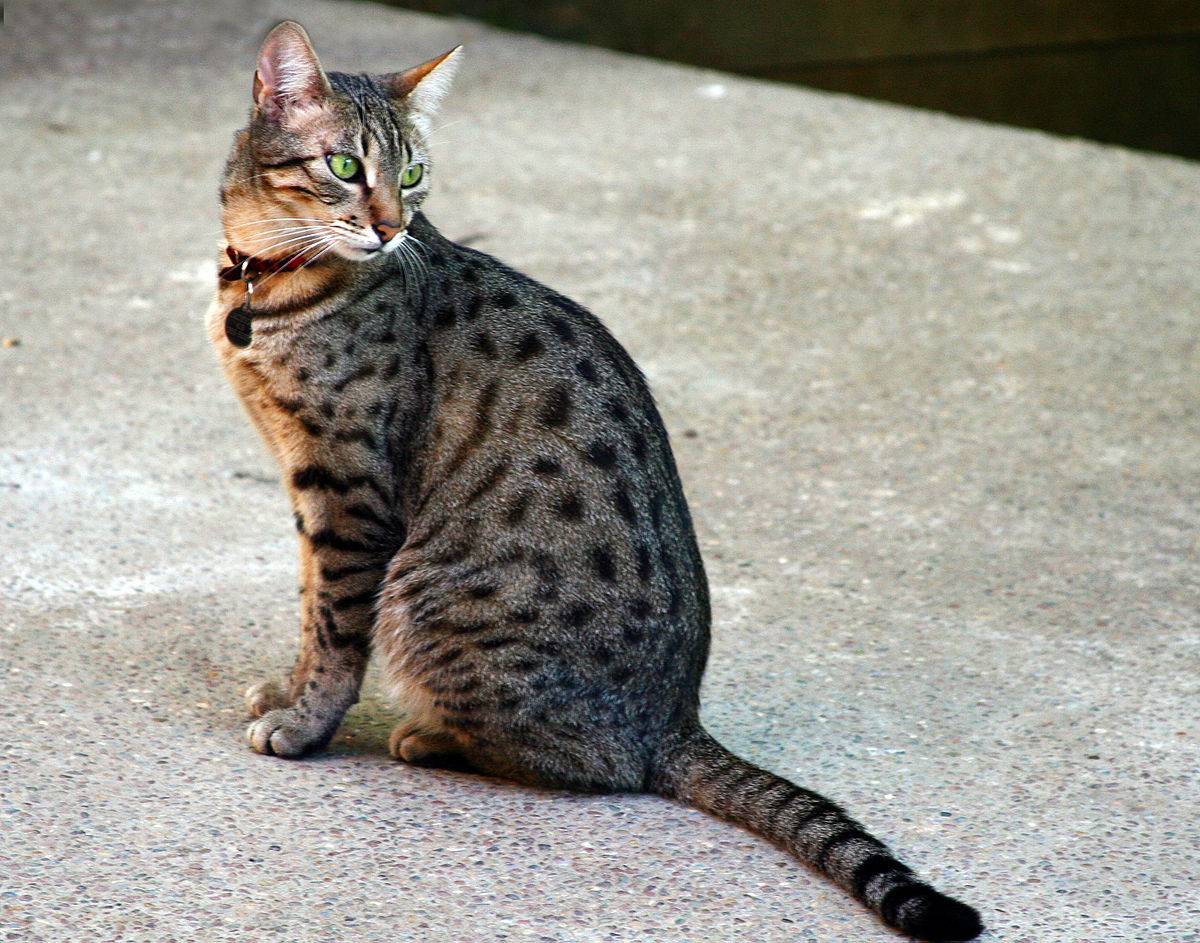 The Egyptian Mau is a rare domestic cat breed that is said to have its origin in Egypt. These cats are closely related to the Korats, Maine Coons, and American Turkish Angoras.

The International Cat Association (TICA) recognized them as a championship breed in 1968. Fond of warm places, these cats are more temperature-sensitive than most of the cat breeds. They have a muscular body with their hind limbs being longer than their forelimbs.

It gives an onlooker the impression that they are standing on their toes. In speed, the Egyptian Maus are unbeatable and can run at a speed of 30 mph. They have a remarkably long dorsal stripe that stretches from their heads to toe. 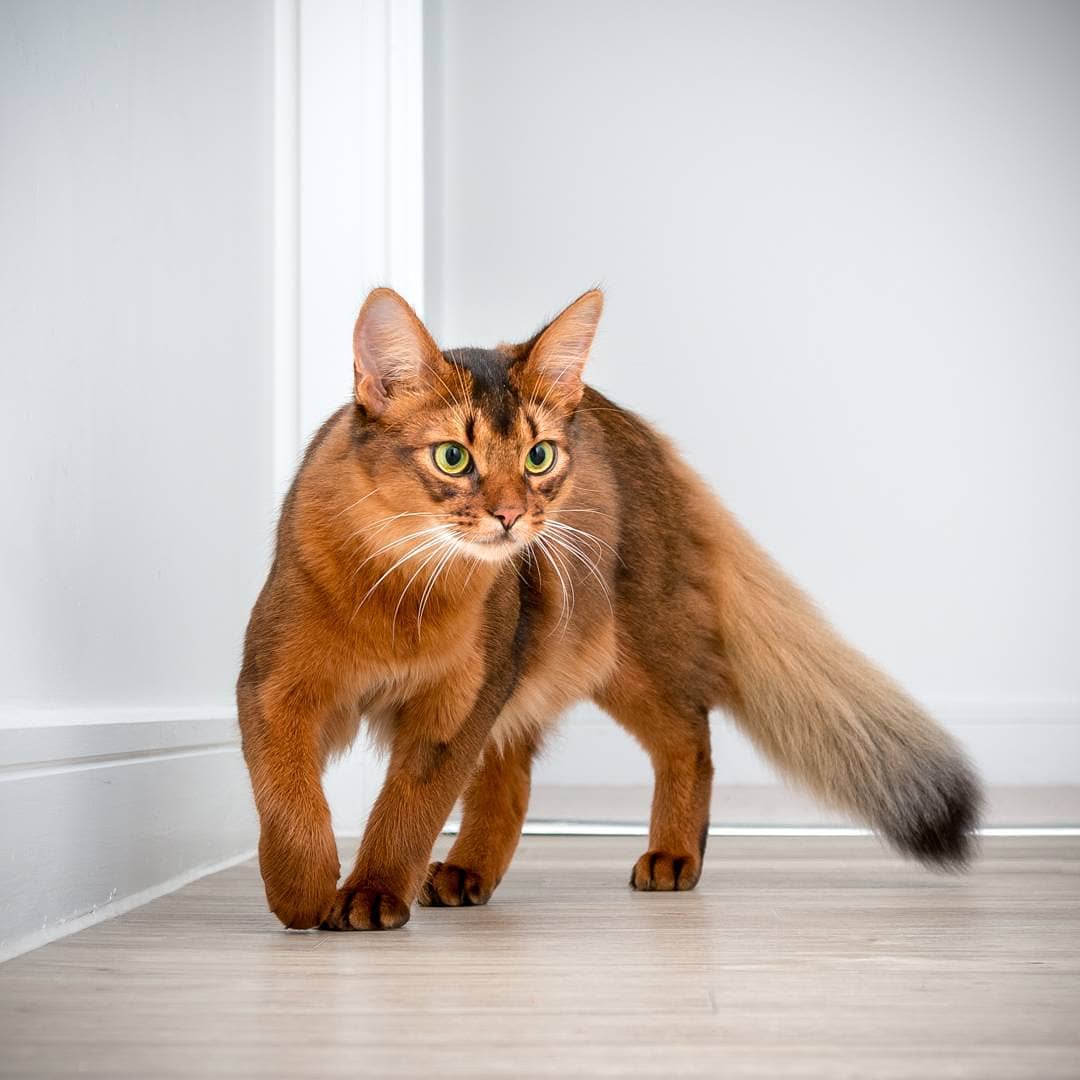 Believed to be originated from Somalia, the Somali cats are a breed of African cats who are cousins to the Abyssinian cats. These cats are said to be the product of the recessive genes of the Abyssinian cat’s gene pool, though nobody can tell how their gene pool is connected.

Somali cats are often referred to as “Fox cat” due to their pointed ears, almond-shaped eyes, and bushy tail. Their body is medium-sized, covered in soft fur.

In 1979, this breed won the recognition of the Cat’s Fancier Association (CFA) in North America. However, it took them another twelve years to be accepted internationally as a unique cat species. 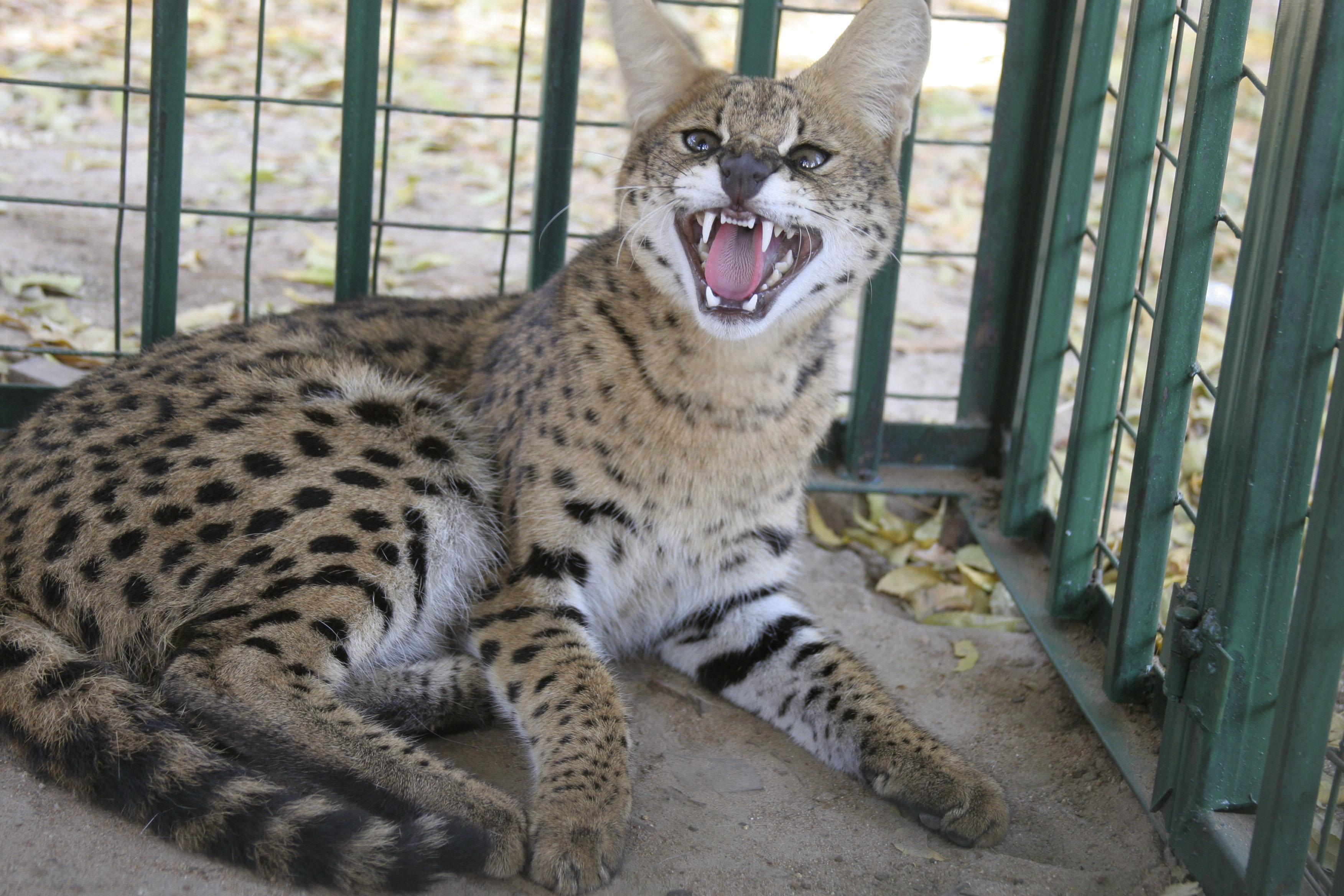 Endemic to Africa, Serval cats are a breed of wild cat that was first discovered in 1776 by the German naturalist, J. C. D. von Schreber.

These cats are large carnivores and hunt both during the day and the night, preying mainly on rodents. They have a sharp sense of hearing, which they utilize while hunting.

Although they are not the largest of all cat breeds, they do have the longest legs in relation to their body, a feature that makes them easily distinguishable from the rest of the cats.

Serval cats have a small head with relatively larger ears, a short tail, and a golden-yellow spotted coat. They are solitary animals and usually tend to avoid any social encounter. 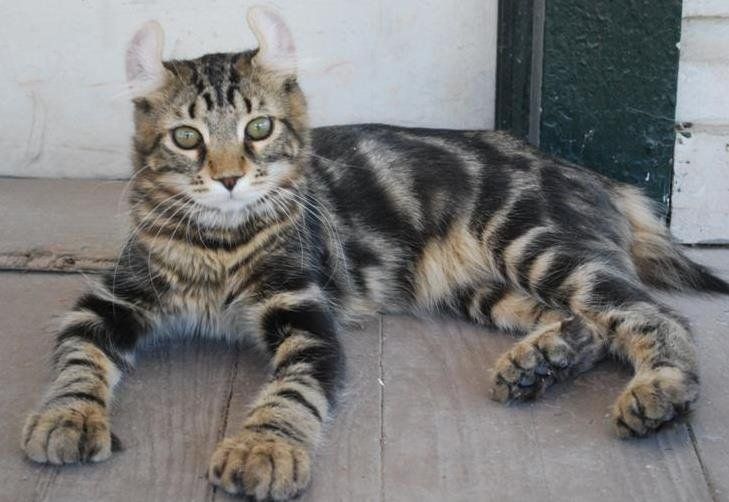 The Highlander cats are an experimental cat breed created by cross-breeding the Desert Lynx and the Jungle Curl. Although their lineage contains some of the non-domestic blood, they have a wholly domestic temperament.

Highlander cats have a medium-sized body with tiger-like stripes all over, with curled ears that set them apart from other cat breeds. They have acquired their ears from the Desert Lynx.

These are the cat breeds who, although most of them are domesticated, look very much like their large-boned family members. They have borrowed the wild appearance from their cousins but can make great household pets for any cat lovers. If you are about to get a pet cat, look for them in the shelter.