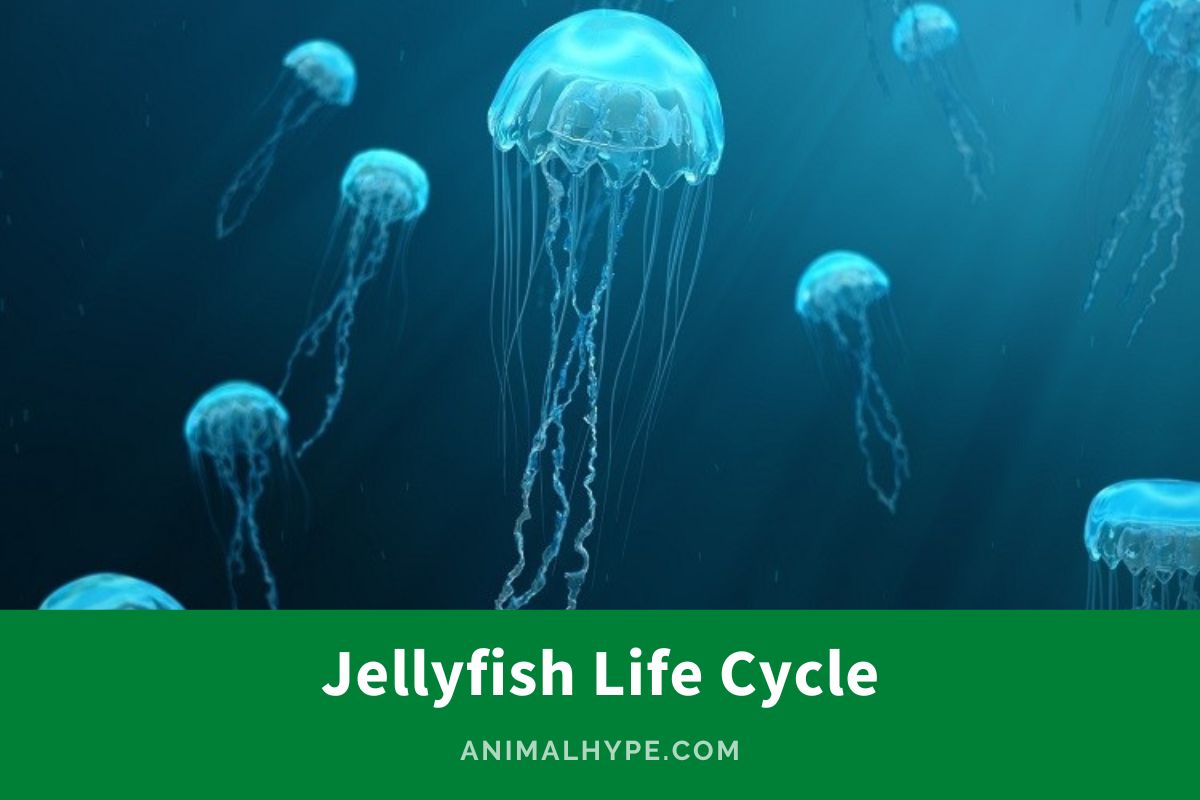 You might have encountered some gelatinous animals on the beach at times which are drifted on the shore by the strong ocean currents. These creatures with tentacles are what you call Jellyfish.

They are beautiful bell-shaped jelly-like animals that have long trailing tentacles, pulsating bells that give out light with rainbow-like colors. Jellyfish have a complex Life Cycle and changes the way it looks many times during its life.

The jellyfish life cycle begins as eggs and sperms from the male and female Jellyfish. Once the sperms fertilize the eggs, the development of eggs sets off. As soon as the egg development is complete, tiny Planula larvae come out from the mouth of the female. The platonic larva floats on water and settles only when it reaches a specific size and also once it finds a suitable solid surface. After it settles, the larvae morph itself into Polyps. In favorable conditions, Polyp undergoes budding to give birth to a structure called Ephyra, which swims freely. Ephyra grows into Medusa which reproduces sexually and eventually dies.

Adult Jellyfish are either male or female. Both of them possess organs used for sexual reproduction called gonads. When an Adult Jellyfish reaches its maturity and is ready to mate, the male Jellyfish releases sperms through the only opening in their body, the mouth.

These brood pouches contain the eggs that get fertilized when the female swims through the sperms of the male. There are some species where the female Jellyfish harbors the eggs in its mouth.

The male sperms flow inside her stomach and fertilize the eggs. Once the egg is fertilized, it leaves the stomach and gets attached to the arm of the female Jellyfish. In Female Medusa(adult jellyfish), the eggs are fertilized internally.

The egg once fertilized, continues to develop inside female Medusa. The cell divides several times(embryonic development) inside the egg to form an embryo.

The egg hatches as soon as the development is complete and emerges a tiny oval, flattened creature which is known as ‘Planula’ from the female’s mouth. It’s a free-swimming Planula larva at this stage that is set out on its own.

The Planula is covered completely with thin hair-like cilia that beat rapidly and help it to flow with the ocean current for some time till it is all set for the next stage.

This tiny haired Planula floats on the surface of the water for some days. If it survives then after a few days it drops down from the surface and settles finally on a rock or a solid surface that is suitable for it to attach itself.

As soon as Planula attaches itself to the solid surface or rock, it begins to develop into a Polyp. This Polyp is also known as scyphistoma.

It is cylindrical in shape and looks like a stalk. At the bottom of the Polyp is discs shaped structure and at the top where the mouth lies are a large number of small tentacles.

The Polyp can retain its form for several years. In this stage, it feeds on the small marine animals by drawing them into their mouth with the help of tentacles.

In this stage, the tentacles and the mouth of the polyp are facing upwards. The jellyfish Polyp resembles a sea anemone.

As the Polyp grows bigger and mature, it starts to bud a new Polyp from its truck part. Slowly with time Polyps form a hydroid colony where every single Polyp is attached and linked to the others by feeding tubes.

When the Polyp reaches a certain age or an appropriate size it moves to its next stage. There is no fixed time for a Polyp to develop further into an Ephyra. It can take up several years too.

As the Polyp colony matures and is ready for its next stage in its life cycle, the stalk part of the Polyp starts developing grooves horizontally on the body of the Polyp.

This process of developing grooves is known as strobilation. These grooves get deeper and deeper until the Polyp looks like a stack of saucers. The top part of the Polyp with grooves matures the fastest and buds off as Ephyra, a tiny immature jellyfish.

Ephyra moves away from the budding Polyp and grows. It is a disc-shaped structure just like a coin. It does not possess a proper bell shape but has arm-like protrusions.

These disc-shaped structures Ephyra is a baby Jellyfish that is free to swim and is on its own. With time it grows into an adult Jellyfish called a Medusa.

Medusa resembles an umbrella-shaped body with tentacles hanging from the lower border. This bell/Umbrella shaped creature is what most people have commonly seen Jellyfish as.

Once the Jellyfish reaches its adult size, it is ready to multiply. A Jellyfish spawns frequently if it gets proper food.

In Medusa, there are two major cell layers. One is the internal gastrodermis and another one is the external epidermis. The all-purpose gut in the Jellyfish is lined by the gastrodermis. It is through the gut that the food is ingested and the reproductive cells are taken in and released.

Jellyfish have no lungs, stomach or intestine as the oxygen and the nutrients flow into and out of the body directly through the gastrodermis or the outer body cells.

The epidermis cells contain nerves that are loosely set in a network known as the “nerve net”. This nerve net is the most basic nervous system you’ll ever find in a multicellular animal.

In between the epidermis and the gastrodermis is a gelatinous layer or material which is known as mesoglea. This mesoglea makes up most of the Jellyfish’s body.

Their body is mostly water, say about 95% and mesoglea is mostly water. Along with a high percentage of water, it contains structural proteins, nerve cells, and muscle cells. All these make up the internal skeleton of Jellyfish.

In Jellyfish there are some sensory structures that are called rhopalia, these structures contain receptors that can detect movement, light, and chemicals.

The cubozoan Jellyfish are known to have complex eyes with lenses, retinas, and corneas in their rhopalia. They respond to visual stimuli pretty well.

The astonishing thing is how Jellyfish interpret an image created by the eyes because of the absence of the brain. As there is no brain, how is it that the eyes are able to see the happenings?

Many scientists believe that the nerve ring has a major role to play in doing brain duties. This nerve ring is a cluster of nerves in a ring-shaped that can be found in Adult Jellyfish.

Throughout the Life Cycle of the Jellyfish, it takes up a variety of body forms but the major ones are only two. One is the Polyp stage and the other one is Medusa.

Polyps have the capability to reproduce asexually by budding, whilst Medusae spawn sperms and eggs and reproduce sexually.

In Medusa, the eggs are fertilized internally. When they are released by the female, they are already fertilized by the sperms of the male Medusa.

Once released, the fertilized eggs continue to develop inside water. The cell divides several times inside the egg to form an embryo. This embryo develops into a tiny flattened creature which is known as ‘Planula’.

The Planula is covered completely with thin hair-like cilia that beat rapidly and help it to flow with the ocean current for some time till it is all set for the next stage.

This tiny haired Planula swims without purpose and settles down finally on a rock or a solid surface that is suitable for it to attach itself. When attached the Planula undergoes two major stages.

Jellyfish are classified in the Cnidaria phylum. There are about 4,000 species of Jellyfish and these are mainly divided into four different groups.

These are the most common Jellyfish that we see in the sea in abundance. There are as many as 200 species of only this type. They are big and colorful and also interact with humans.

Being common it is also sometimes called a “True Jellyfish”. Scyphozoa Jellyfish spend most of their life in the Medusa form.

These aren’t very commonly found. They spend very little time in the Medusa form whereas the Polyp form results in the formation of large colonies.

These are also known as Box Jellyfish because of their bells that look like boxes. There are some varieties of Cubozoan Jellyfish which are highly venomous.

These species have a well developed nervous system compared to other species of Jellyfish.these have complex retina and eyes. The cubozoa Jellyfish engage themselves in very elaborate courtship behavior.

This species of Jellyfish do not float in water but remained attached to seaweed or rocks throughout their life. They are usually found in cold water and are shaped like a trumpet. They display the utmost beauty and camouflaging techniques.

When the jellyfish is touched or there is some chemical cue, the harpoon shoots out the venom and spear the prey or enemy. The toxin is released within 700 nanoseconds.

Some Jellyfish are toxic for humans too, such as the Box Jellyfish or Irukandji Jellyfish. They can be highly dangerous; causing severe reactions or even death.

When crisis strikes the gelatinous blobs revert to their juvenile state very easily. They live the Polyp stage again; start budding, form medusa, and so on. It is a never-ending process and the cycle goes on and on forever.

Are Jellyfish Bioluminescent? Yes, there are many Jellyfish that have the ability to glow or produce light (bioluminescence).

The protein in the tissues of the Jellyfish undergoes a chemical reaction from time to time to produce green or blue light in response to a stimuli.

It is a defense mechanism of the Jellyfish to keep their predators away from them. Bright light can startle a big predator much easily.

How do jellyfish Camouflage themselves? To camouflage, Jellyfish adapt their body color according to the water, depth, and darkness. Jellyfish is mostly colorless or transparent so that it can’t be spotted by the predators.

Some Jellyfish are red in color because red color blends well in dark water that can be found in a depth of about 200 meters. Also, red is much easier for the creatures to produce.

How do Jellyfish move in water? Jellyfish use their tentacles to swim in the water. The bouncing movement is seen because of the jet propulsion that Jellyfish use to move from one place to another in water.

Jellyfish squeeze their bodies so that the squeeze pushes out water from the bottom of the Jellyfish and their body is propelled forward in the required direction.

Life Cycle of a Lion