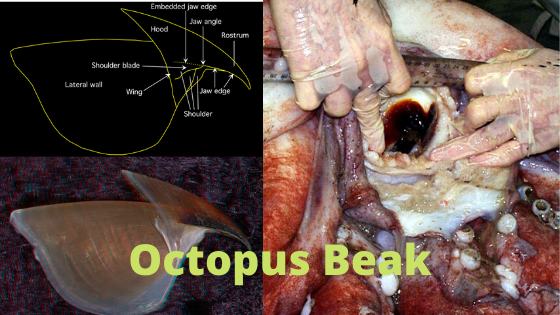 Earth is home to about 8.7 million species. These species vary from tiny to huge and from usual ordinary to downright creepy and weird.

One such eerie creature is an octopus. These look squishy and not so good looking, but this eight-armed living thing is quite an interesting being.

It has some unusual features that make it extraordinary.

One of those features is a secret weapon that all octopuses have. That secret weapon is a scissor-like beak that is well hidden in between all those long whippy arms/tentacles.

Researchers say that octopuses weren’t such slimy and squishy creatures many centuries ago. They had hard shells all over their body. During the Cretaceous and Jurassic period, this marine creature lost its hard ‘mobile home’.

This transformation and loss of shell were likely for the better of today’s octopus as it has made the creature more agile. Octopus now because of its flexible body can capture their prey and evade their predators much easily.

Octopus beak is the hardest part now left in its body. The beak is situated in the buccal mass section of the Octopus’ body. The buccal mass is the very first part of this creature’s simple digestive system.

The beak is well surrounded by the long appendages that are an exceptional feature of this species. The beak of the octopus is used for eating and works like a scissor. The beak is actually like a jaw, which is stiffer on the outside compared to the inside. It’s made out of a hard substance called chitin.

Chitin is the same substance that makes the exoskeleton of Crabs. Octopus’ beak looks very similar to that of a parrot. It has two parts beak, and the parts are, the upper beak and the lower beak.

Beak makes hood on the outer side of the mandible that clamps on to the prey to bite it. 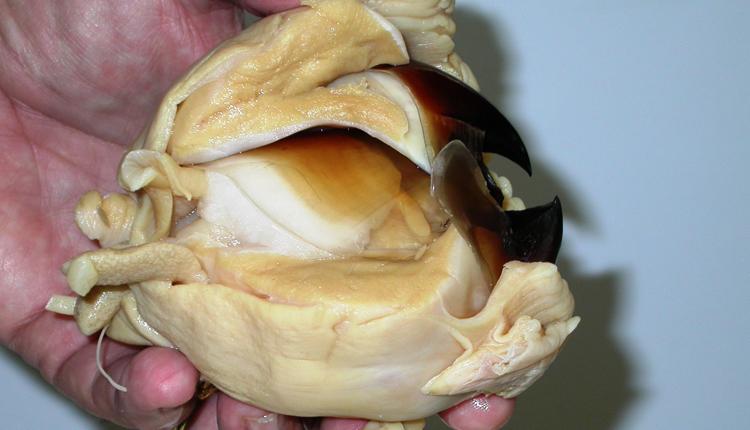 The octopus beak is primarily made of chitin, but it also comprises of cross-linked proteins that make it even hard to digest by the octopus predators. It has been observed that the remains of the cephalopod beak are found in the stomachs of large predators of octopus, like the sperm whales.

As you move from the tip to the base of the beak, its stiffness gradually reduces. The reason for this gradient is the different chemical composition of the beak at different parts.

It is strange but true that octopuses do not have teeth; nonetheless, they still can crack up many of their prey that has a hard exoskeleton.

A well-equipped beak compensates the missing teeth in the octopus, which is just as effective, or maybe more, to break open into the mollusks and the crustaceans.

The beak is as sharp as a Swiss Army knife. The shells of the animals that can’t be opened with its tentacles are opened within seconds with its beak. The beak not only breaks open clamshells but also can tear the flesh apart.

Also, there is a radula right next to the beak, which is a barbed tongue. Once the shell opens up, this tongue is used to scrape the animal out of the shell. 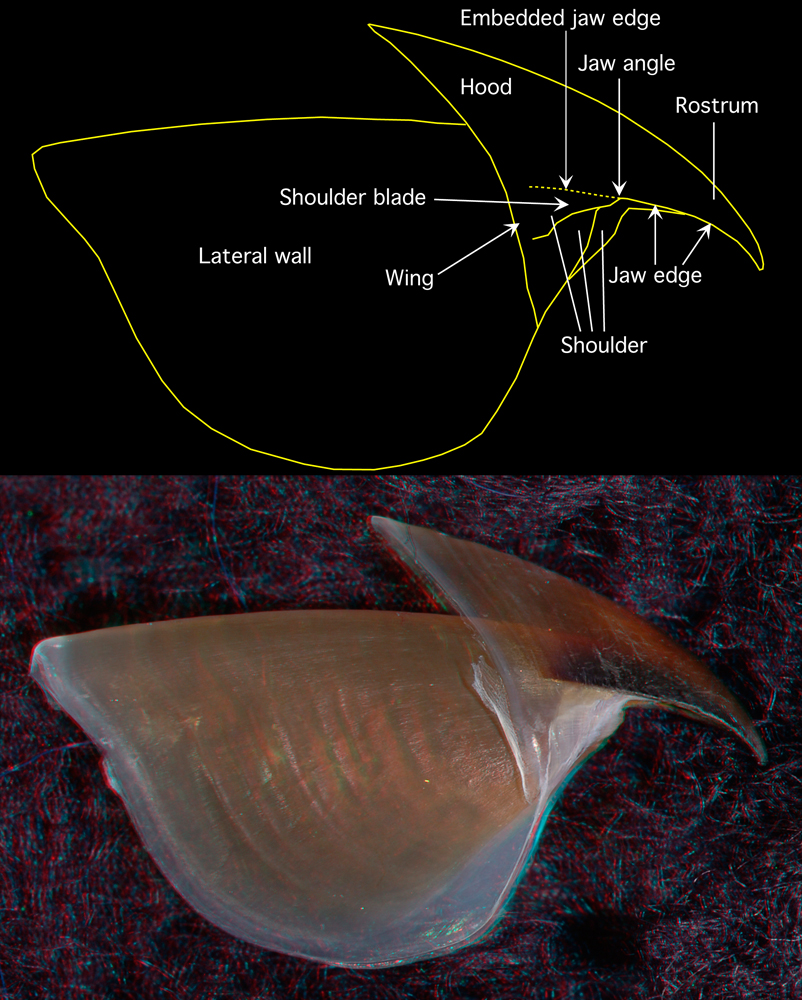 Along with both these deadly tools, there is another tooth-covered organ, which is known as the salivary papilla, this is a natural drill machine in the octopus’ body.

The papilla secretes some eroding bodily secretions that erode the shell, and thus the prey becomes weak and is consumed by the predator (octopus).

The octopus, while swimming, captures the prey and envelops it in the web of its tentacles/arm skin, it’s like the octopus’ natural net. Once the prey is in its full control, then the octopus devours the prey first with its beak, then the radula, and if both these don’t work, then salivary papilla comes into play.

Some Octopus hunt during the night and some other species hunt the whole day, from dusk to dawn. Octopus eats a variety of foods, and the list of their diet is quite long. To cut it short, an octopus is meat-eating creatures, which means they are carnivores.

They can diet on lobsters, snails, shrimp, clams, sharks, and various other scallops and crustaceans. The diet depends on the availability of the prey in its immediate environment.

As mentioned in the paragraph above, the octopus uses various means to consume and capture its prey. Consumption of all the prey is primarily dependent on the beak of the octopus.

The flexible and long arms of this creature are well-equipped to reach well-hidden places in the crevices where the small fish or crabs are hidden.

Octopus’ soft body can squeeze into the tiniest of the spaces to catch their prey or to escape a predator. Once the prey is in its clutches, it pulls it close to its beak, bites it, and paralyzes it with a poison that finally kills the prey. After the prey is killed, the meat is siphoned out and dined on in hiding.

Mating in a Beak to Beak Posture

The different species of octopus engage in a variety of unheard mating behaviors. One amongst them is beak to beak mating. In this kind of coupling, the male and the female octopus first choose to share a den.

When the sharing of the den happens, then the creatures mate daily. This mating is done by facing each other with both their suckers aligned.

At this time, the female chooses to change her color to pale white while the male octopus opts to change its color to a darker coloration. While mating, the female wraps her eight- arms around the male and embraces.

If the male is smaller, then the female can completely envelop its partner. The male during this process is occasionally seen inking while in the female’s grip, and the females jet water during this time at the male.

Creatures mating face-to-face are rare in the Animal Kingdom but not completely unheard of. Certain cuttlefish, squids, close relatives of octopuses, dolphins, and males are some of these species that do get involved in this kind of intimacy (face-to-face).

This technique of enveloping the partner in its arms /tentacles is reminiscent of aggression rather than a loving gesture which is seen in octopuses.

Many researchers believe, beak to beak mating is advantageous to the female that is guarding her eggs. For male octopuses, this act might mean that they wish to monopolize the female’s time and stop her from courting with more than one suitor at one time, which some octopus species accomplish.

The mating couple during this time, shares a place to stay, share food, and even eat together in beak to beak position, which is again quite a rare sight in the case of octopuses.

Ever heard or seen an octopus squeezing through a small hole? Trust us, seeing this act can send chills down your spine. Any hole as big as the octopus’ beak can indeed fit in the complete octopus.

Their maneuvering powers are great, and this is why they can compress themselves out of any tight space. Not having bones is the most significant advantage when you want to try such stunts.

The beak is the hardest part in the octopus’ body, so wherever the beak fits in, the whole body can too. This is the reason why octopuses can vanish within a few seconds. Hence, they are known as escape artists.

1. Octopus beak is the hardest substance in its body. It’s made up of chitin and cross-linked proteins.

2. The Octopus Beak is similar to that of a Parrot’s Beak.

4. Octopus beak is a two-part beak with an upper and a lower mandible.

6. The tip of the Octopus Beak is much stiffer than the base of the beak, and this gradient is due to different chemical composition at various places of the mandible.

7. The beak is used to break open into the mollusks and the crustaceans.

8. The beak is as sharp as a Swiss Army knife.

9. Octopuses engage in a Beak to Beak mating Posture in which they face their partner and align their suckers together. In this kind of mating, they both share food Beak to Beak.

10. Any hole as big as the Octopus’ Beak can fit in the complete octopus.

Do octopuses eat themselves?

Yes, octopuses can eat themselves when they suffer from autophagy. When an octopus is stressed, it can eat its arms. This is also termed as self- cannibalism.

Yes, the octopus can bite humans with their beaks, and the bite can cause swelling and bleeding. The bite though is not fatal, but if the octopus pours its venom inside you, then it could be deadly.

Why does an octopus eat their partner?

Sex can be deadly for a male octopus. The Female octopus is often more significant than its male counterpart. Bigger means it has a larger appetite too. Hence, there is a constant risk that the male takes when he is mating because, at that point, he is so close to the female that she might strangulate him and eat him by ripping off his head with its beak.

How hard is the octopus beak?