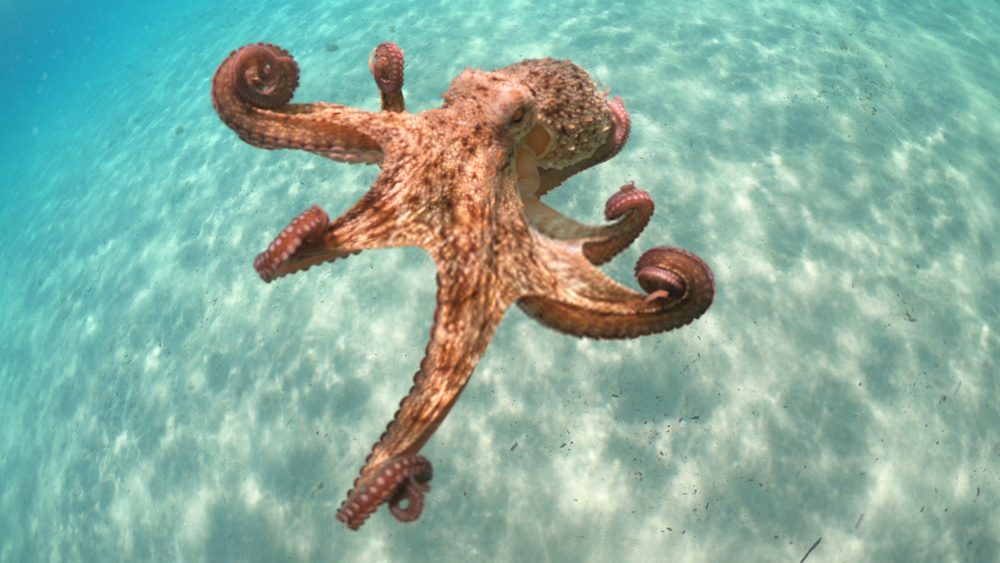 Octopuses have gained a lot of momentum in the exotic pet industry lately. Though they aren’t anything like the commonly seen pets, people still want one to be there in their aquarium. In fact, octopuses are not interesting pets to have around as you might think them to be. They are intelligent species that becomes active only when there are things around them to explore.

They may look like low maintenance pets but they are not. You need to keep them engaged because chances are that they are going to get bored staying inside the cramped species of your aquarium. And you risk them getting stressed and self-mutilating!

If you still plan on keeping one as a pet, you are going to need some names for them. Worry not, we have you covered! In this article, we have compiled a list of 153 cute and funny names for your octopus!

Let us begin with some names inspired by the octopus characters in movies and cartoons.

7 Names For Your Octopus Inspired From Movies & Cartoons!

In this section, we have compiled a list of 10 names for octopuses that are inspired from movies and cartoons. Octopuses, in general, are depicted as villains or monsters in most of the cartoons and folklores because of their unearthly appearance.

If you have kids who love cartoon characters, this list is for you!

Squidward: Squidward tentacles also known as Squidward is a famous cartoon character from the cartoon SpongeBob Square Pants. In the cartoon, Squidward is portrayed as bad-tempered and cynical but that does not make him any less favorite than the other characters among the fans of SpongeBob square pant cartoon series.

Stretch: Yeah, you guessed it right. He is the same guy from the movie toy story 3. She is loved for her 8 tentacles and glitter all over her body. Don’t you think Stretch is going to be a nice name for your octopus?

Dr.Octopus: The nuclear physicist turned villain character in the Marvel Universe! Considering the intelligence of octopuses, we believe Dr Octopus makes the perfect name for your pet!

Tellaro: Tellaro is not a cartoon character rather it is a legend in the Italian village of Tellaro. The legend has it that a giant octopus rose from the water and rang the warning bell to alert the villager when pirated approached. Tellaro the octopus is a savior as per the legends which makes it a name worth giving your octopus.

Oswald: Oswald is a famous cartoon character known for his gentle & polite behavior. He is known for his willingness to go out of his way to help his friends.

Kraken: Kraken is actually a character in Scandinavian folklore. It is written in the Norse sagas that Kraken dwells on the coasts of Norway & Greenland.

10 Funny Names For Your Octopus – Inspired By Their Intelligence

Octopuses are highly intelligent species. In fact, it is the most intelligent invertebrate on the planet. To make it much simpler, they are as intelligent as a Labrador.

Mr Einstein: Who needs an introduction to who Albert Einstein is? Considering the size of the brain of an octopus and their intelligence you can call them the Albert Einstein of invertebrates.

Walter: Walter white is an intelligent chemist from the series Breaking Bad. Don’t you think Walter is going to be a nice name?

Granger: Yes, Hermione Granger the intelligent young witch who knows all the answers in the Harry Potter series.

Professor X: The intelligent & psychic mutant among the X-Men!

Ozy: Oxy is an intelligent octopus who has a record for opening a closed jar in less than 60 seconds.

Molly: Molly was an octopus that lived in the research labs of Norway. She was known for bouncing the ball to kill time in the aquarium.

Tesla: Tesla was an intelligent scientist who lived in the 1980s. He is known for his contributions to the field of Electrical Engineering.

Dr. Brand: Dr. Brand is a fictional character shown in the movie Interstellar. Dr. Brand is depicted as a young and intelligent mind.

Inky: Inky was an octopus that lived in the National Aquarium of New Zealand. Inky escaped the aquarium through the drainage slithering and out to the sea.

25 Superhero Names For Your Octopus

Octopuses are superheroes in the invertebrate world considering their unique abilities.

In this section, we have compiled a list of 25 superhero names exclusively for your octopus. Your kids are going to love this!

20 Cool Names For Your Pet Octopus

You have decided to keep a pet octopus knowing how difficult is it to maintain them. That isn’t something simple and for that reason, you need to give an awesome name to your octopus.

Here we have compiled a list of 25 names that stand out of the pack!

20 Funny Names For Your Pet Octopus

Bringing a new pet home is a lot of fun. The best part is that you get to be creative while naming them unlike naming a human!

In this section, we have compiled a list of 25 funny names that you can give your pet octopus.

Not every octopus are hermaphrodites.

When you bring one home and say you know that it is a male, you can choose to give him a name from the following list of 25 names.

As mentioned in the previous section, not all octopuses are hermaphrodites.

In this section we have compiles a list of 25 names for your octopus, if it is a she!

10 Names For Octopuses Inspired From Food

Naming a pet after your favorite food has become the new trend in the pet world.

Some find it funny while others find it interesting, either way, your octopus is not going to care. That gives you the liberty to call it whatever you choose to.

In this section, we have compiled a list of 10 names that are inspired by the food we eat.

Unlike other pets like dogs or cats, an octopus is not going to come to you when you call its name. So you can choose to give your pet octopus a different name when it is small.

A baby octopus is not anything like you would imagine it to be. In fact, you can hardly see it for it’s the size of a peanut.

Our octopus names list is perfect for naming your new octopus or all of those adorable little octopuses that will be in your care this year. You can also give your imaginary octopus an interesting name if you don’t own one.

With AnimalHype, I hope you have fun naming new pet octopuses while checking out the list of octopus names.

Do Octopus Have Bones?