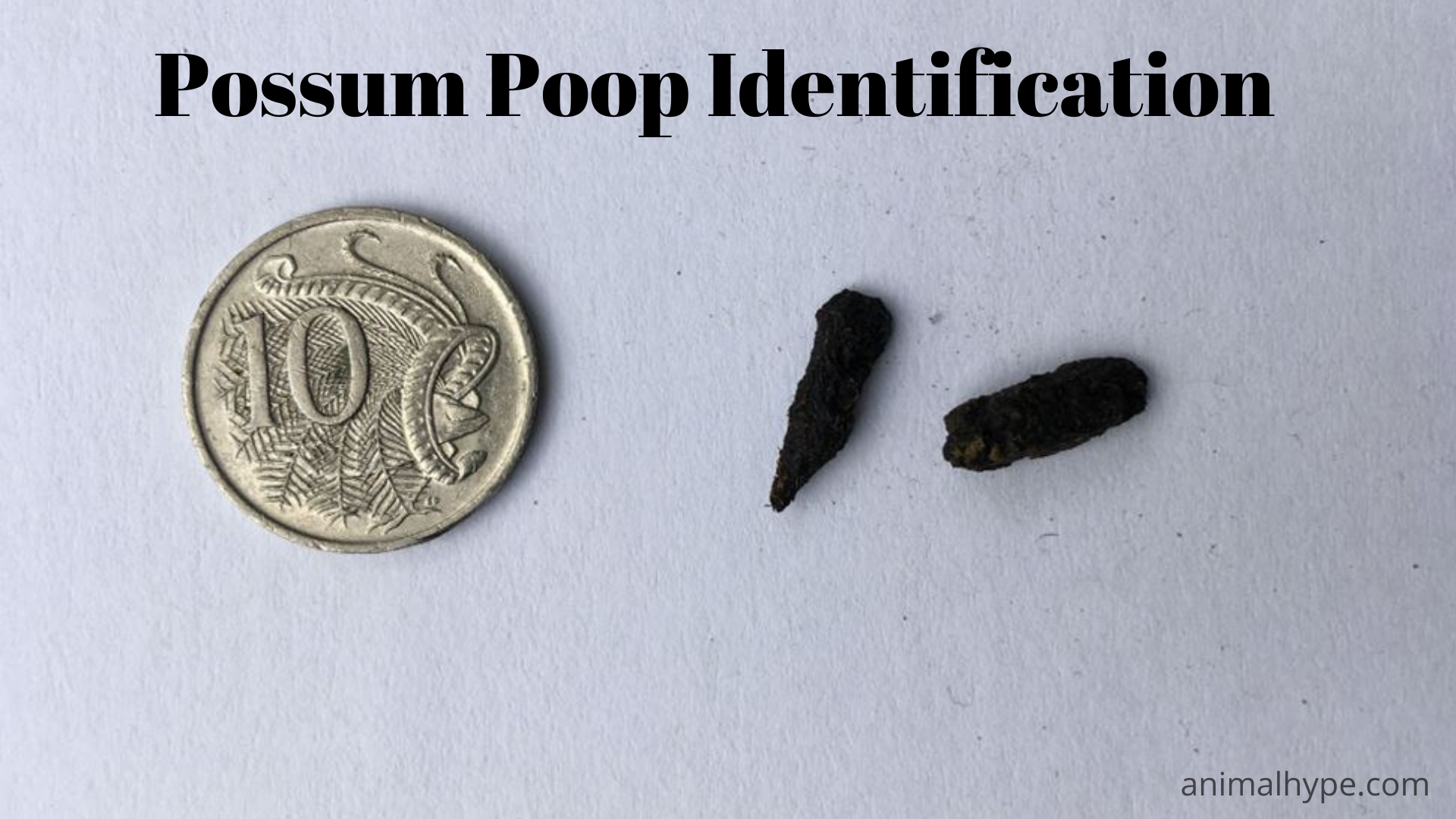 Possums are among the common invasive pests commonly found in and around human settlements. Though this seemingly cute and furry cat-like animal might not appear to be a serious threat, they can give you trouble once they settle down in your attic or the basement of your house!

These furry animals are known for excreting a lot of waste materials. If left unattended, possums can convert your attic or basement into their toilet within a few days. To make things worse, their poop stinks bad and can carry many disease-causing pathogens too.

Like any invasive pests, possums do not choose their nesting ground easily. Before settling down at one place, say your attic they might have already done some reconnaissance.

Possums prefer nesting in attics because it is the safest place for them to be, and it is dark too. Being nocturnal animals, their invasion usually begins at night. They will start becoming a frequent presence in your garden, backyard, attic, or basement before making it their nesting ground.

Possums do not come out during the day, which means that you can’t know for sure whether they are on your premises or not.

But yeah, you can rely on other clues to confirm a possum invasion. For instance, you can look for their paw mark, scratching sound from the attic, and many other things. But when it comes to possum invasion, the best way to identify them is from their poop because they drop quite a lot!

So, what does possum poop look like? The poop of a possum is very much similar to that of a dog in color and appearance. But unlike dogs, possums leave their droppings in a pile. Their droppings are large and cylindrical in shape with a diameter of 3/4th of an inch.

In the following sections, we have compiled a list of information that can help you identify a possum’s poop with ease.

Where do possums poop the most? 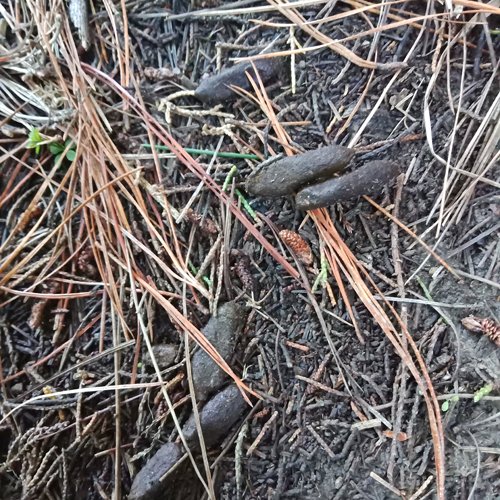 Unlike the other invasive species like the raccoons, possums do not poop in a single latrine site. Instead, they are found to poop wherever they are.

As said earlier, possums are known for excreting a lot of waste materials, so finding their poop will not be difficult. For instance, possums are found to poop in swimming pools, on the grass in the backyard, near the garbage bin, and most commonly in attics and basements.

What does possum poop look like? Possum droppings Identification 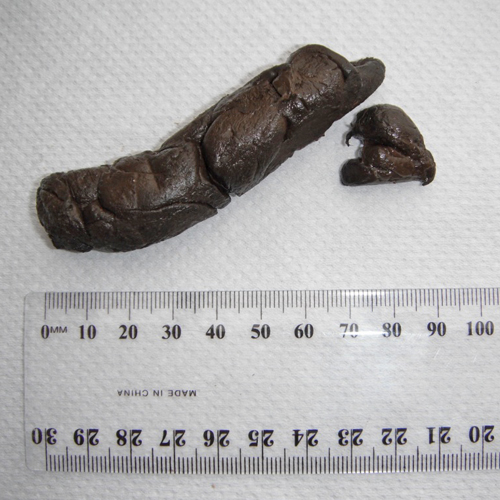 As said in the previous section, possums roam around freely during the night and they poop wherever they feel like. A possum poop looks similar to that of a dog’s poop and even has the same color and smell.

This means that, if there are pets in your house it might be difficult to identify a possums’ poop. It is, for this reason, it is advised to be extremely careful while clearing your pet’s poop from your yard. Chances are that it might be the poop of a possum.

Possum poop is generally large with a diameter of about 3/4th of an Inch with smooth sides. These furry animals being omnivorous and scavengers it won’t be possible to identify the poop with its color. But in general possum poop are known to be brown or blackish.

Similarly, unlike the other commonly seen pests, using a stick to inspect the poop for berries will not be helpful because possums are opportunistic eaters.

The identifiable feature about a possum poop is that their poop is generally found in piles resembling a train. Apart from these, a possum’s poop is not continuous rather it will be broken in the middle.

In short, a discontinuous poop commonly found in piles with a brown or blackish color may be that of a possum! 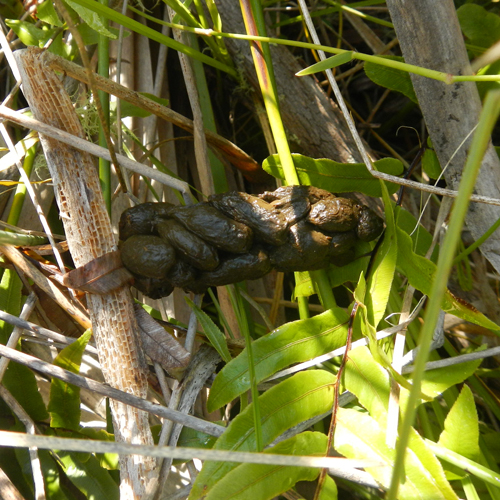 Apart from their invasive nature, possums are known for their stinky poop. A possum poop in general smells rotten irrespective of how old it is.

The poop that’s mixed with urine might even smell worse. If there is such a strong foul smell coming from your attic or basement, chances are that there might be a possum in your attic.

How to identify possum’s poop? 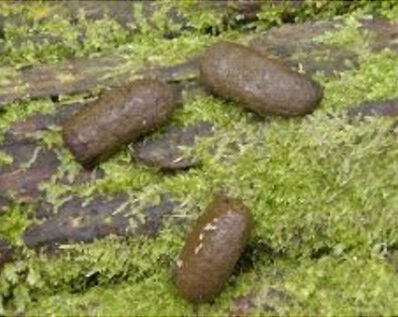 A possum’s poop looks very similar to that of a dog’s poop and they almost have the same color too. Owing to these reasons, identifying a possum’s poop is not an easy task, especially if you have pet dogs in your house.

Also, possums are known to be opportunistic hunters or scavengers. Being omnivorous animals they eat anything they can get your hands on. This means that we cannot use a stick and look inside to poop to identify the species based on what they have eaten as in the case of raccoons.

The first obvious signs of a possum poop would be an unbearable rotten smell. In most cases, possums poop and urinate together. The ammonia in the urine would make the feces wet and produce an unbearable scent.

Secondly, a possum’s dropping is generally large and cylindrical, will have smooth sides and brown or blackish color.

In most cases, possum droppings are found in piles with droppings lying on top of one another mixed with urine. If you look at a possum’s poop carefully you can see that their droppings are not continuous but will be broken in the middle.

In short, you need to look out for these 3 signs:

Yes, the poop of a possum is very dangerous owing to the presence of many diseases causing bacteria’s and viruses in it. Possum feces have been found to carry deadly bacteria that can cause diseases like leptospirosis and salmonella.

As said in the previous section, possums are found to poop in swimming pools and other sources of water. If you are someone living in possum infested areas, it is always advised to keep them closed and to check them often to see that the water is not contaminated by possum poop.

Apart from all these, another major threat associated with possum poop is the fungi spores present in them. These fungal spores when inhaled can cause severe damage to lungs and heart which can eventually infect your blood too.

That being said, though it is important to remove the possum poop from your surroundings, it is equally important to do it properly with the utmost care.

Can humans contract diseases from possums?

Possums being submissive animals, chances of them attacking humans are less. This means that the only chance of direct contact with a possum is through physically touching the feces with an open wound or consuming food or water contaminated by a possum’s poop.

Leptospirosis is one such bacterial infection in humans that is caused by leptospira bacteria. This bacterium is abundantly found in the poop and urine of possums.

Leptospirosis is a zoonotic disease that is transmitted to humans when they come in direct contact with a possum poop or urine through a cut or an open wound.

Leptospirosis is a rare disease and if left untreated can cause kidney damage, meningitis, liver failure, and respiratory complications.

Mycobacterium ulcerans is a skin eating bacteria that initially starts as painless lumps on arms and legs. Eventually, these lumps will develop into large ulcers. If not detected and treated in the initial stages, the Buruli ulcer can lead to permanent disfigurements.

Many such diseases are connected with the poop of a possum. Similar to humans, animals are also vulnerable to these diseases. If you have pets at home, you need to be cautious while you let them out. Especially if you live in areas infested by possums!

Can pets get a disease from a possum?

Among all the pets, dogs and cats are at major risk. This is because both these pets are extremely curious and territorial.

Quite often do these pets end up in a fight with possums? Owing to this reason pets such as cats and dogs are considered to be at risk.

If you are someone living in areas infested by possums, you should consult with your vet and get your pets vaccinated against these diseases.

How to safely remove possum poop from your yard or attic?

If you have identified a possum’s poop or the poop of any invasive pet for that matter, it is advised to clear it off at the earliest. Especially if you have kids and other pets at home.

Now that you have an idea of how dangerous a possum’s poop can be, we will have a look at the ways to safely remove the poop from your compound.

And if you find a possum’s poop lying in the garden or in your backyard, wear a glove, mask and torch it with gasoline. Spray some disinfectant in that area after dousing the fire. Similarly, if the poop is in your swimming pool, drain the water off completely and clean the pool with a disinfectant.

How to keep possums away?

Not just the possums, all invasive pests are attracted to human settlements because of the abundance of food. Apart from being opportunistic hunters and omnivorous animals, possums are excellent scavengers too. In short, human settlement can be an excellent foraging ground for possums.

This is why if you are living in an area infested by possums, you should be careful to keep pet food out of a possum’s reach and always keep the garbage bin properly closed.

Being nocturnal animal’s possum prefer darkness and there can’t be a better place for them to build a nest than in your attic or basement.

Scattering cat or dog fur in these areas can be effective against possums as the smell of potential predators can keep them at check. Similarly, you can also use ammonia, mothballs, or garlic to keep them at bay.

Make sure that you don’t resort to any inhumane ways to end possum infestation. Also, you can reach out to professional pest control agencies to safely remove the possums from your compounds!