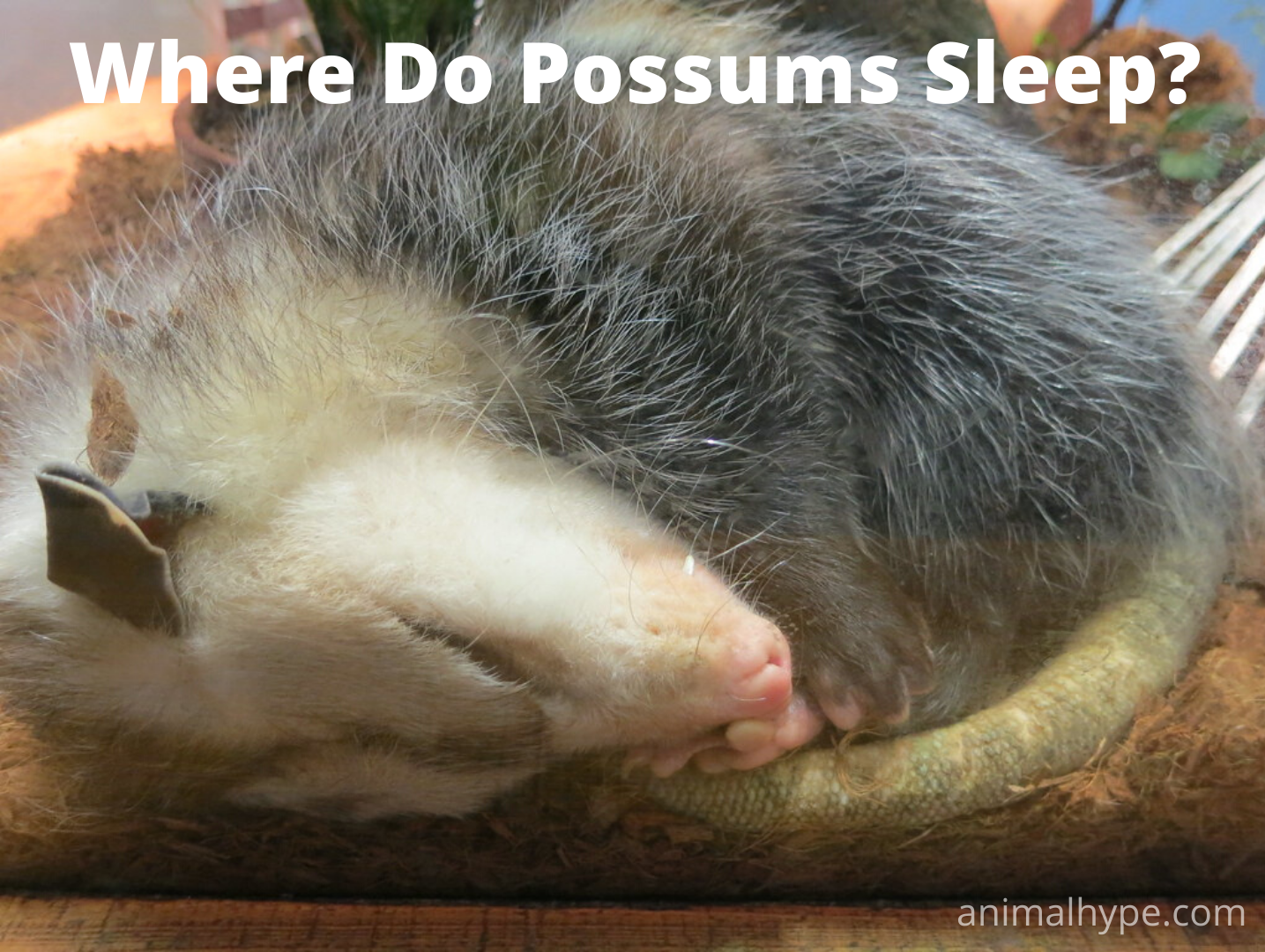 Possums are small nocturnal animals and have long snouts and small, sharp teeth usually found in Australia, New Guinea, New Zealand, and China. They are creatures who despise light that they have different dens for them to fall asleep in. Since they are of different kinds, each of them has different preferences on where to sleep.

So, where do possums sleep? Possums are nocturnal animals, which means they are awake at night and sleep during the daytime. These small animals find shelter, log or a nest to enjoy a sound sleep. Some possum species prefer to sleep on the ground level. They climb the trees only to feed on fruits or shrubs. However, some of them are arboreal and come to the ground to find food.

Different types of Possums have different preferences as to where they sleep.

Ringtail Possums are found in Southern Australia, who sleep during the day and are entirely nocturnal i.e. they are awake at night, do not sleep in nests. They sleep in a tree hollow, which has stacks of dry leaves upon which they sleep.

A tree hollow could be found in a tree, which is a tree hole. It has ample of space for these possums to sleep in. This type climbs the tree to fetch its food at night.

Rock-Haunting Ringtail Possums are found in the rocky regions of Western Australia usually and belong to the common ringtail possum group. This type has the shortest tails of ringtail possums with the end of the tail with no hair.

They’re herbivorous animals who habit in areas having large boulders of rocks. They do not make a nest and sleep in a well-protected rock ledge during the day.

A rock ledge is a piece of rock that exists on the side of a cliff of a mountain-shaped in the form of a narrow shelf.

Little Pygmy Possums, also called Tasmanian Pygmy Possums are the world’s smallest Possums. Their snout has long whiskers, and ears are hairless. Their tail has a thick fur on the base and sparse hair between the scales.

They are found throughout Tasmania and this type of Possums is arboreal, i.e. they have habitats in the trees.

These Possums sleep in a dome-shaped nest, that uses strips of tree bark to make it in tree-cavities or rotten wood.

They prefer living in solitary and share the nest only with their offspring. They are omnivorous and feed on insects, spiders. They also feed on nectar and pollen coming from Banksia, an Australian Wildflower, and Eucalyptus.

Western pygmy-Possum spend their daytime in a leaf-lined nest or a tree hollow, sleeping. They also sleep on the leaves of a tree called Xanthorrhoea.

If it’s not either of the two, they also a third-place to sleep, which is the babbler’s nest, a species of a bird whose nests these Western pygmy-possums sleep on.

This possum is endangered due to loss of habitat and lack of lack at times. They are usually found in the Southwest Australia region, areas of South Australia.

They inhabit woodland, shrubland, and bottlebrushes. During the day, they venture out to sleeping in a place that is densely vegetated.

At night, their movements take place in search of food, and they also migrate to other areas at different periods over the year. They feed on nectar and pollen and also insects.

Greater Glider is seen frequently in Australia and is related to the ringtail possums, with the kind of build that they have. They are nocturnal and are herbivores who feed on Eucalyptus’ leaves and buds.

They spend nights venturing to the highest parts of a forest canopy, however during the day, it sleeps in hollowed trees, lined with leaves and bark of trees.

They glide between high trees and are assumed to be clumsy since they avoid traveling through the ground.

Feathertail glider is the smallest of the gliding possums, who has the tail of the same size as its body. They are also known as pygmy gliding possum, who is a native of Eastern Australia.

Their tail is that of a bird’s feather, hence the name. They are omnivorous, feeding on nectar, pollen, and ants, termites. They are arboreal and come to the ground to find food. They spend most of the time on the trees and are nocturnal animals.

They rest in their nests that are lined up with leaves and barks of the trees, on the trees. Since they are social, unlike a few other species, about five of these possums can sleep together in one nest, especially when the breeding season is at peak.

They do not hibernate, but during the cold weather, they have a decreased physiological activity.

The Common Brushtail Possum is a furry tailed possum that is the second largest of the possums. They are widespread in Australia. They are arboreal and nocturnal.

They follow a solitary lifestyle, and these individuals make scent markings by urinating, thereby keeping a distance from others. They sleep in tree hollows and caves and could be seen utilizing roofs of the houses for sleeping as well.

They are known for competing with other animals for den spaces, although they are not found to be aggressive.

Unlike other possums, they do not only rely on Eucalyptus to meet their dietary nutrients. For this, they feed on shoots, fruits, seeds as well, insects, birds’ eggs, and chicks that enable them to sleep during the day, peacefully.

Striped Possum is a black with three white stripes running head to tail, with its head having white stripes forming a ‘Y’ shape. They are solitary animals, nocturnal and arboreal.

They produce a rather unpleasant smell and is noisy. They feed on fruits, leaves, and insect larvae, which they find after breaking open tree branches through their powerful incisor teeth.

During the day, they sleep on tree branches and leaves that gives them the comfort of a nest. This possum can also be called a ‘mammalian woodpecker’ because they take beetles and caterpillars from the tree bark. 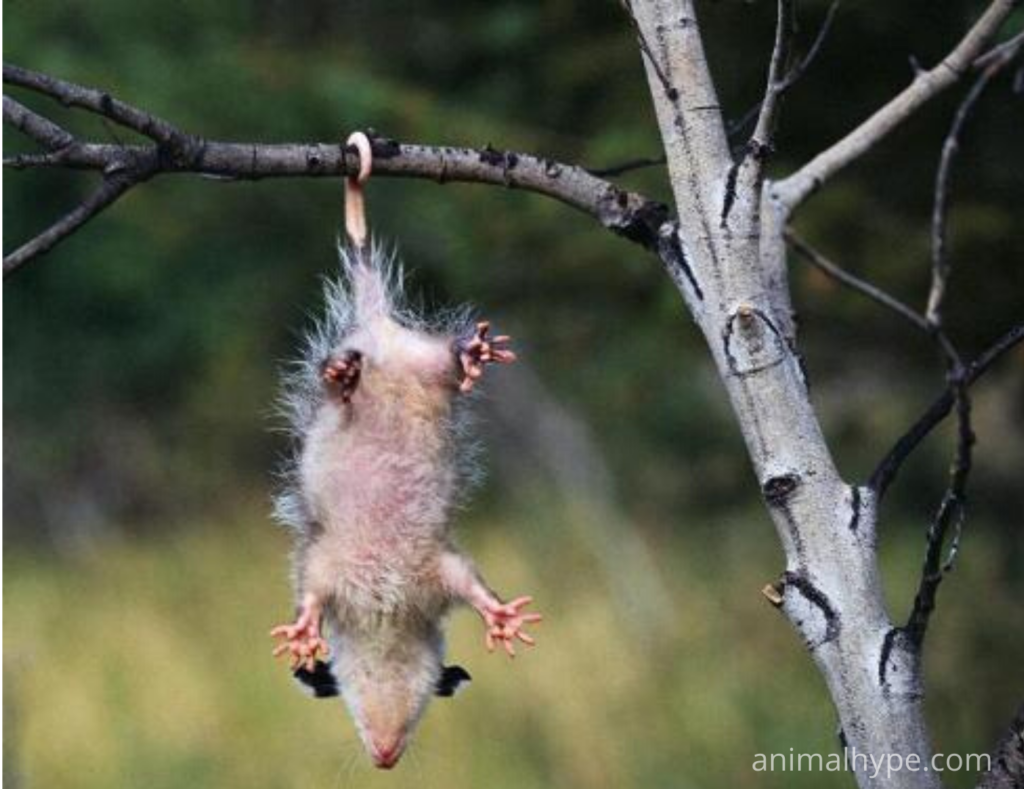 Leadbeater’s Possum is an endangered species that belong to the forests in Central High-lands of Victoria, Australia. This specie is nocturnal; however, they are hardly spotted as they live on the highest forest trees in the world.

They are not solitary animals and live in family colonies of around 12 individuals. All the members sleep together in the nest that is a shredded bark in a tree hollow. Since they are arboreal, they sleep above the ground level.

This possum group is matriarchal, i.e., each group is dominated by a female that suspends outside visitors from entering into groups. The female possums are aggressive and often fight with other females of the group that they live in, in the tree hollows.

There are around 70 species of possum, a lot of them are endangered. They are on the verge of extinction due to the loss of habitats and urbanization of forest trees.

A lot of Possums are arboreal, and they have a habit of living on trees. However, due to deforestation, their habitats are now gone, and so has a number of a few.

Apart from deforestation, even climate change, logging and forest fires have been contributory in endangering Possums.

Do possums dig up lawns and fall asleep there?

Even though Possums are keen diggers, they are the ones to dig holes in the gardens and lawns. They prefer to live in the holes that other animals abandon; however, they do not dig it. They prefer to live up in the trees, and all those arboreal possums only come to the ground for hunting food.

Possums mark their territory so they can sleep in solitary

Mostly, possums are solitary animals. They do not like sharing their territories and mark their territories with their most unpleasant smell, and other possums through this smell do not enter the territory of another.

They do not survive when they are relocated against their will since they cannot be away from their territories.

They do not like sticky and spiky plants. They also do not like bright lights. That is why they are asleep during the day, so they could altogether skip the light.

This is also why they take den inside tree hollows and nests because no light reaches these places, and they can have a peaceful sleep during the day, so they are pumped up during the night to hunt for food and indulge themselves in other activities.

Although trees and their natural habitat, with the advent of time, reduction of trees have witnessed a shift in their preferences, and now more than often, a possum can be found taking rest on the roofs of the houses that give them a tree-like safety feeling.

One can always provide for a rest to these possums by placing the same in the roof. Possums can be a wild pet to keep away rodents from your homes.