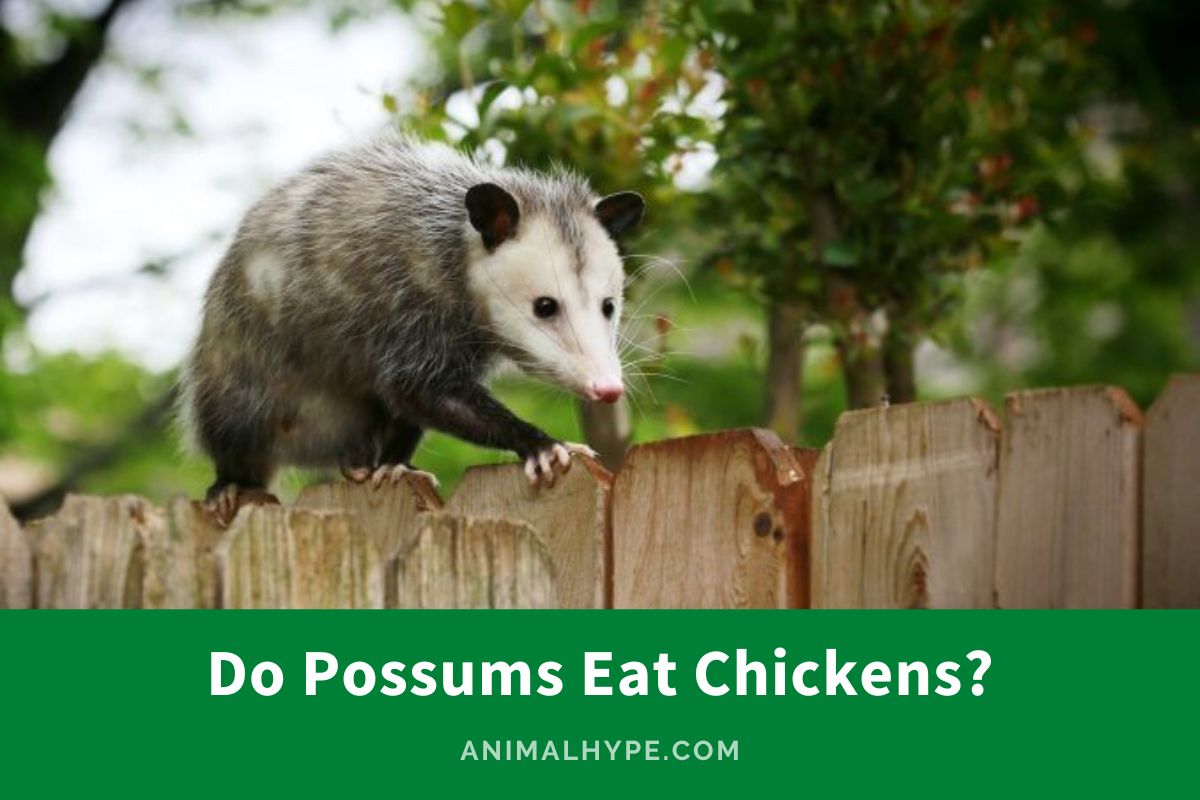 Possum, a marsupial mammal is a slow-moving animal that is usually active in the night. Possum is also known popularly by another name, opossum in some parts of the world. It is as big as a cat when fully grown. Though they are gentle creatures they may growl and attack when threatened.

Being such docile creatures do you think they can attack chickens in your coop?

Let us go in-depth and study possums closely. Read on if you wish to know a great deal about them and how to prevent them from taking away your chickens.

Do possums eat chickens? Yes, Possums do eat Chicken. In fact, they are well known as Chicken Killers. Their sharp razor-like claws can kill a chicken within a few seconds. Very rarely can a chicken survive a possum attack. They lacerate the chicken’s bowels and neck, till they bleed to death. They love to attack chicken and eat them along with their eggs.

A Possum has black eyes and ears, grey to black fur, pointy pink nose, tiny feet, and a long tail that is hairless. It has around 40 to 50 teeth that can cut deep through the flesh as well as the bones. When they are caught off guard they can go into a shock-like state which is called “Playing Possum”.

Possums and their Habits

To save your chicken from the Possum predator, you first need to know about the animal that is likely to attack your pet, their feeding habits, the habitat they prefer, and much more.

Possums or Opossums are the only American marsupial creatures. They are found widely in the west, central, and eastern coast states of North America. Also, you can encounter Possums in some parts of Canada.

The female Possum has a marsupium that she uses to carry her child until the child is about 2 or 3 months old. They prefer to live undercover in forests or in areas like swamps or marshes where they can find food and water very easily.

To live safe in the forest they dig dens inside the tree trunks or live inside abandoned caves or burrows.

Possums are scavengers who will eat anything that they find dead. They are very attracted to pet food. Mostly they have a preference for small prey like mice, bugs, beetles, etc. They can eat fallen fruits from the trees, raid bird feeders, and can also eat out of the rubbish bins if there is a dearth of food. They relish manure and compost piles, yes, seriously!!

Possums eat chicken eggs and young chicks very often. It’s a rare occasion that the Possum might attack the adult chicken but it isn’t ruled out.

After they have attacked the chicken, they don’t consume the whole bird. They only eat the crop and sometimes some parts of the chest, the rest of the parts will be left at the place where the chicken is killed.

Possums do not believe in carrying their food around. The first killing attack is made on the neck of the bird. There are also times when they might just drink the blood and go away.

Possums are not as clever as Raccoons that can open latches and locks, but they can definitely dig beneath the fences and climb them too. Their hands and feet are so tiny that they can reach their limbs through the wire and pull out the bird or its body parts. They can easily fit through small openings as their body size isn’t too big.

How can you protect your chicken from Possums?

1. Do not keep pet food in the open as it attracts Possums. Also, keep the rubbish bins shut as raiding garbage bins is Possums’ favorite pastime.

2. You can keep these chicken predators away from your chicken coop by installing tin cans with rags soaked in ammonia. Punch holes on the side of these tins and keep the lid closed; place them around the periphery of the coop. The pungent smell of the ammonia will keep Possums away.

3. These little cat-like creatures deter from noise and light. You can use this to keep them far far away from the chicken coop. Decorate the chicken coop with fairy lights and turn them on during the night. You can also play music around the coop to make Possums feel that there are humans around.

4. Put traps if you have Possums menace around your area. If you catch one, call the animal control office and hand it over to them for they will leave it in a jungle.

5. Being good climbers, Possums can climb any wall or wire mesh. To keep them out of your home boundary, install a tightly stretched electric wire fence on the top of the original wire mesh.

6. Clean up all fruits that fall on the ground from the trees as these could prevent Possums from invading your garden and attacking your chickens.

7. Be very sure that the coop entrances are properly latched and locked at night.

8. The wires of the coop should be strong and nonflexible so they can’t be fiddled with even if possum reach near the coop. Avoid using chicken wire which can be torn like a tissue paper.

9. Try not to adopt any method that might kill Possums. They are very essential for the smooth running of the ecosystem as they consume insects, snakes, slugs, mice, rats, and other such animals. Killing them is neither recommended nor necessary.

10. If you have chickens as pets, keep dogs too as Possums are scared of dogs and wouldn’t come near the chicken if they found a dog close by.

11. Wolf and fox urine can act as very good Possum repellent. Animals like Racoons, Skunks, and Possums will not even wander near if they smell the urine of wolf or fox on your land.

12. All pet food or chicken feed should be stored in tight metal containers that cannot be opened easily. Easy access to food will result in mother possum nesting and giving birth to her young ones because she would need a steady supply of food for her little ones.

Once she gives birth to her young ones, the area will be taken over by her and her young ones; causing grave danger to your chicken flock. The mother possum believes that the pet feed is for her babies and she will bite and kill the chicken if they ate from their share.

What happens if you encounter a Possum around your home?

If you have followed the steps mentioned above then you need not worry. These steps are enough to keep Possum at a distance from your chicken, but just in case you come across them around your coop just stand still and observe them “Playing Possum”.

When a Possum is frightened or threatened, it lets out a violent hiss and bares its front teeth. In extreme cases of fear, it can act dead (Playing Possum).

It lays motionless with eyes and mouth wide open and tongue lolling out. It also exudes a substance from its anus that is green in color and has a putrid smell that makes it even smell dead. So, the next time you witness something like this, don’t be astonished.

Facts about Possum and their Feeding Habits.

1. Possums love fresh fish and apples. To get rid of them you can set a live trap with a bait of apples and fish.

2. At one time a female Possum can give birth to 13 to 27 babies at one time. The female has only 13 nipples which means not all babies can be fed at the same time if they are more than 13. Some babies when not fed properly die of starvation.

3. Possums hunt only at night so it’s important to spring the trap in the morning to avoid catching your own pet inside the trap.

4. Male Possums are more aggressive compared to the females but it’s the females that are great hunters and will hunt down chicken and other small animals to feed her young ones.

Do Possums eat Chicken Head? No, Possums do not eat the head of the birds. It’s only interested in the crop and the abdomen of the bird. Never does a Possum eat the whole bird.

Do Possums eat live Chicken? Yes, Possums are known to attack live chicken and eat them too. Being scavengers they don’t mind eating a chicken killed by some other animal as well.

Can Possums eat Snakes? Yes, Possums eat snakes, even the ones that are venomous. They have a strong immune system to rear-fanged snake venom and viper.