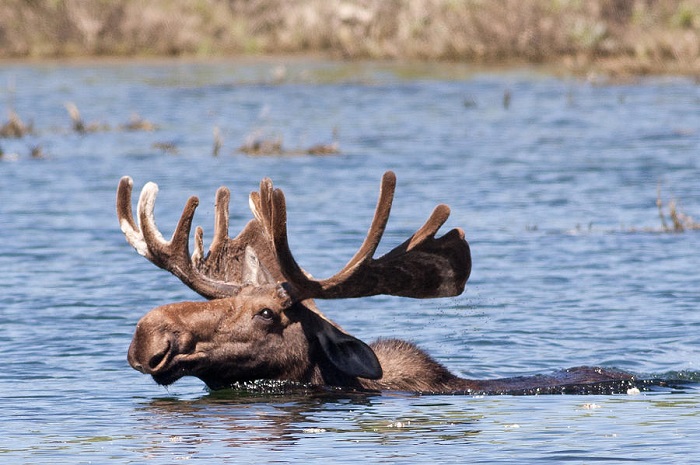 Moose are the largest members of the deer family that lives in North America, Canada & Europe. These huge animals are known for their long & round snouts, humped back, thin legs, and a massive body. When we say massive, we really mean it.

An adult moose can weigh as much as 650Kg and its height ranges from 5 to 6.5 feet. I don’t think one would need an explanation as to why they are called the tallest mammals in the northern hemisphere. There are quite a few interesting things about the moose that are beyond the scope of this article. For now, let us focus only on whether a Moose can swim or not.

So, can moose swim? Yes, Moose can swim well. They are excellent swimmers and divers, capable of diving almost 20ft under the water.  They can hold their breath underwater for one whole minute. The large nostrils act as valves to keep the water out during the dive.

In this article we’ll discuss some interesting facts about the swimming of moose, the reason why they swim, how do they swim with their heavy body and a lot more. Let’s get going!

Why do moose swim? 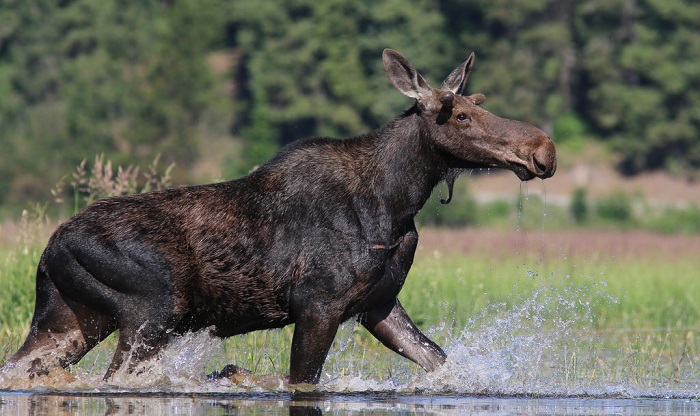 Moose belongs to the family of deer and they swim, quite bizarre huh?

A moose can swim right after a few days from their birth which makes it clear that swimming has got something serious to do with their lifestyle. It does not matter what type a moose is, they all equally feel home in the water. A moose can easily swim several miles in one stretch and are also capable of holding their breath underwater for almost a minute.

They are found to swim for three reasons:

Yeah, you heard me right. During winters while food is scarce a moose can lose up to 30% of their body weight. After winter when the ice melts, moose plunges into water bodies in search of aquatic plants that are rich in nutrients.

On average, a moose needs about 25Kg of nutrient-rich plants in a day. In the countries where moose are found, summers are short and the only place where a moose can find food is underwater.

At any point in its life, a moose cannot afford to lose their weight because females expend a considerable amount of energy during pregnancy while the male expends the same energy growing its antlers after winter. So it is important for them to eat nutritious plants regularly.

To cool their body during summer

On hot summer days, a moose may go on a casual swim to cool their bodies.

To prolong its life

A moose can run as fast as 35 mph with its 650 kg body. Imagine how much pressure would be there on their thin legs! This makes the chances of a moose getting osteoporosis and arthritis way too high.

Forget swimming, standing on the water for some time is going to take the stress out from their legs which is something they badly need.

Moose are known for their staggering lung capacity which enables them to dive and remain underwater for almost a minute. When they dive, they fill in their lungs with air and then go underwater.

Apart from this, their nostrils are capable of acting as valves to keep the water out of their nose while they are underwater.

An interesting thing to note is the rapid drop in the respiration rate of the moose when underwater. This also helps them to remain underwater for longer periods.

This isn’t the case while they swim for long distances. While they swim they keep their nose above water which enables them to swim longer distances. Moose, in general, can swim at a speed of 9.5kmph and swim for 14kms in one go.

How do moose eat underwater?

As discussed in the earlier sections, a moose can hold its breath for one full minute and they dive underwater foraging for nutrition-rich green plants.

Once the moose finds them they’ll bring it back to the surface and eat them. After they consume it, they’ll go back again and comes back with another mouthful.

Moose do not have teeth in the upper jaw. This helps them to suck underwater plants to its mouth and carry it till it reaches the water surface. The moose is also capable of holding its breath while it eats. In some cases, moose are also seen eating underwater.

Did you know that moose is saving its ecosystem while diving?

Okay, now it is time for a basic lesson on biology. Among all the elements that are needed for the sustenance of life, Nitrogen is the important one. In the natural habitat of a moose where the temperature is always low, nitrogen is scarce for the plants to grow.

On average, a moose forages for about 45 minutes underwater and during this period a moose can disturb 100 square meters of the lake bottom. Researchers have found out that in areas where moose forages, the nitrogen content has tripled.

When it comes to the impact of a moose on the land it is estimated that a moose passes almost 78grams of nitrogen to the land each day through defecation and urination. That is equivalent to 40Kg of fertilizer in a year!

Most of the predators of a moose target the calves as they are an easy catch. Swimming with the mom gives the calves an added advantage of protection from predators.

For how long can moose swim underwater?

Moose are adept swimmers who can hold their breath for almost 1 minute. And yeah, moose can dive underwater to depths of 20ft. But that doesn’t mean they can swim underwater without being detected like other aquatic animals.

Moose can remain underwater for only a minute, beyond which they have to come to the surface and breath. So when a moose swims for long distances they keep their nose above water and swim.

Are moose safe from predators while in the water?

Sometimes moose are found to swim in the ocean trying to cross between islands. They aren’t going to be safe as they are while swimming in the lake. There have been reported cases where moose have been attacked by killer sharks.

How do moose protect themselves from hypothermia while swimming in cold waters?

By the end of summer when the temperature starts to drop the moose will start shedding its thin summer coat and begins growing the thick woolly winter coat, which is 5 times warmer.

This winter coat is multi-layered: There is an outer layer of thick and long hairs and an inside layer of guard hairs. These guard hairs are arranged in a honeycomb structure creating thousands of air pockets that keep the water out and helps the moose stay warm.

Did you know that these winter coats can keep the snow away from melting on the moose’s back?

Difference between Caribou and Moose