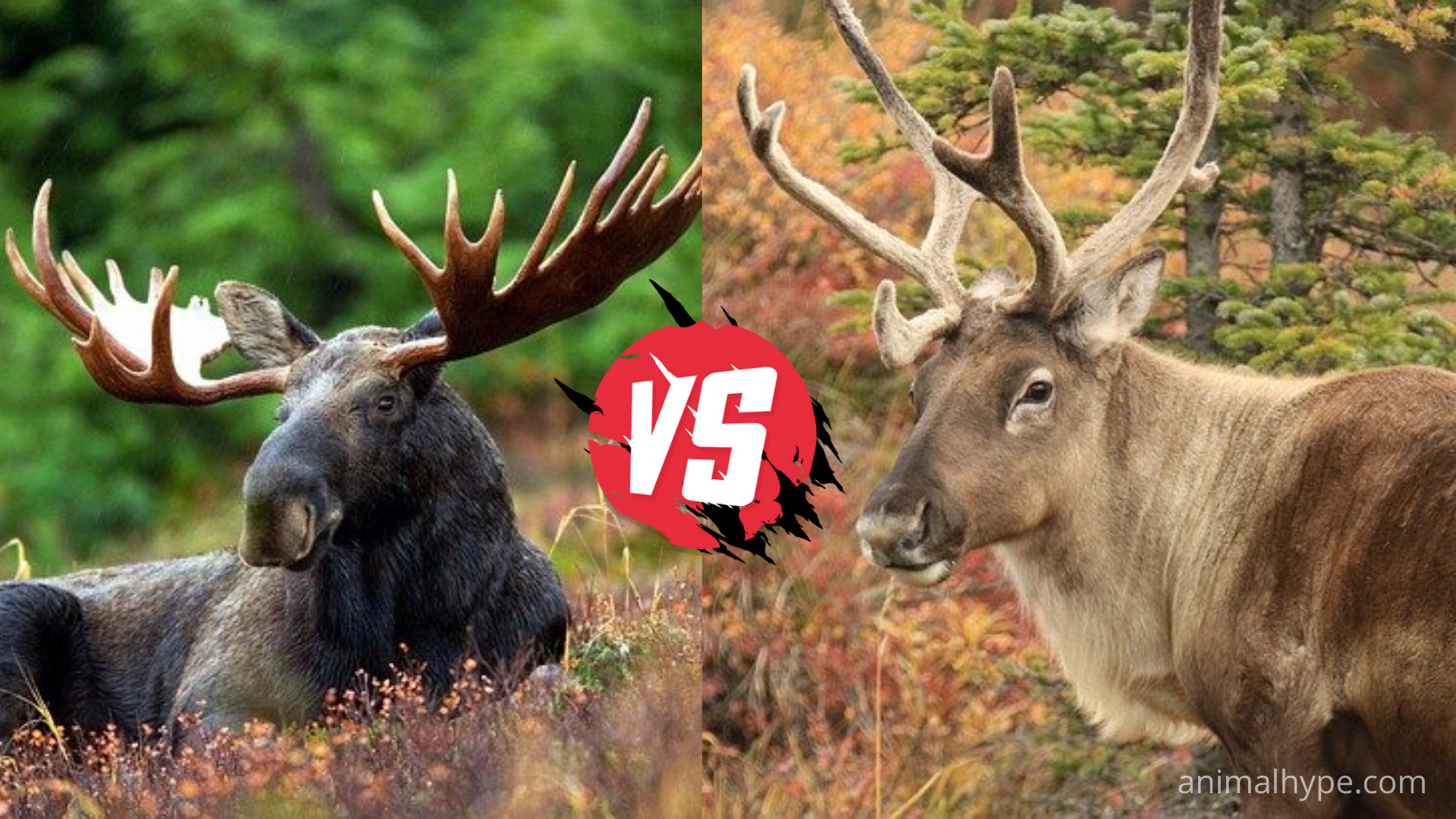 They live in a variety of biomes, from Tundra to the Tropical rainforest. They are ecotone species, who live in transitional areas between the forests and open space. Caribou and Moose are two very eminent deer species and people generally get confused between them.

Let’s discuss the differences between Moose and Caribou.

Moose and Caribou have a few similar features; however, the differences are more specific. The Caribou has brown, shaggy looking fur and a white neck and belly. They come with a long snout, a short tail, long legs, and round hooves. While, a moose has a short tail, shoulder with humps. Their fur is brown or black, has long legs and wide, flat antlers of old bulls.

Caribou is a wild species of deer called a reindeer. They belong to a group of hoofed mammals called the ‘Artiodactyls,’ a group that also includes camels and giraffes.

They in sub-arctic Boreal forests during the period of migration. These forests help in seeking to refuge them from flies and mosquitoes.

The largest member of the Deer Family “Cervidae” is Moose. This name is common in North America. In Europe, a Moose is called an Elk.

Even though the Caribou has shaggy brown fur, they can be almost entirely white in some areas. Caribou is called a Reindeer. A fold of loose skin hangs from the neck, covered with long white hair on its throat.

They have double-layered fur. They’re the only deer species that has antlers in both males and females. The females have smaller and straighter antlers, the males have a large and branched out antlers.

Moose are considered the tallest mammals in North America. They have a short tail, a hump on their shoulder, and ears so large that they can rotate them for the stereophonic hearing.

They have a sharp hearing because of the antlers that they have. Their fur provides excellent insulation from the cold.

The Male Moose are called Bulls, and they have massive antlers. They can grow 6 feet wide. They use antlers to fight for mating, and they shed it each winter.

The Moose’s height from the hoof to their shoulders is estimated to be from 5 to 6.5 feet. Males weigh around 360 to 600 kilograms, while the females weigh 270 to 400 kilograms. They have a height range varying between 4.5 to 6.8 feet.

The diet of a Caribou constitutes Lichens, grasses, mushrooms, sedges, tundra plants, twigs, branches, and fruits. They are herbivores.

Once the winter hits and the snow covers the Tundra, the Caribou then feeds only on Lichen, that survives the cold winters due to its composition of an Algae and Fungus.

The Moose, in warm months, feeds on leaves, twigs, buds of hard and softwood trees, and shrubs. Aquatic plants are also their food at times.

In winters, the Moose feed on woody plants, the bark of willow, birch and dogwood trees. They have four-chambered stomached like the cows. The food is fermented in the first chamber, while the nutrients get extracted in the next three chambers.

The Caribou undertakes one of the most enervating animal migrations than any other terrestrial mammal takes. Herds of animals in thousands complete over 3200 miles of the migration journey.

The herds of cows leave several weeks before the males, along with calves. They move from one region to the other, depending upon the availability of the tundra plants that may reduce during winters. They cross the lakes and rivers during their course of migration.

The Moose spends winters in a shared winter range and summers in a secluded range. They migrate in North Minnesota between 9 to 21 miles and in Alaska between 10 to 58 miles. They usually follow the same path for each season of migration.

The Caribou are excellent swimmers as they use their hooves as paddles. They can swim at a speed of 6.2 miles per hour. Their coats help them stay afloat and warm when they swim through the icy waters, crossing the water bodies.

They have a speed of 49.7 miles per hour. Male Caribous indulge themselves in a fight during the rutting season, i.e., the mating season. At times, they end up with serious injuries.

The worst thing that might happen is that their antlers become locked, and they starve when they cannot unlock. They are quiet animals. They, however, may make snorting sounds like that of a pig.

A few dominant male Moose, during the mating season, will lead a group of female Moose to create a “Harem herd.” Other males fight with the group leader to mate with the females.

The Caribou’s breeding season starts in October. One male breed several females, i.e., they are polygynous breeders. They fight each other to get the right to mate with females.

This common phenomenon exists in almost all deer species. Females reach sexual maturity after 2.5 years of birth. Their gestation period is anywhere from 225 to 235 days. The delivery occurs in May or June when the food is vast.

The male Moose, Bull, make loud noises to attract mates in September and October. The Bulls live alone; however, they are out during the mating season to fight with other bulls using their antlers.

The gestation period is of 231 days, and after it, the female gives birth to one baby, called a calf. The calves are more of red color when they’re younger. Immediately after they’re born, they can stand on their legs.

At birth, they weight around 16.2 kgs and gain 1 kg per day. They wean after 6 months, i.e., they start feeding on other food apart from mother’s milk.

Caribous live in Alaska, Canada, North America, Norway, Greenland, Siberia, and Finland. Biomes like Montane, Tundra, and boreal are their habitats, and they need plenty of space to avoid predators.

There are about 3.5 million in North America, 1 million in Eurasia. Nearly 3 million live in Northern Europe.

Moose live across Northern North America as well as Northern Eurasia. Except for arctic regions, they live throughout the vast majority of Canada and Alaska.

These animals are very fussy when it comes to choosing their home. They prefer to live in areas that have abundant food, plenty of hiding places to seek refuge in when there is a threat of predators. The temperature has to be moderate.

A forest is their natural habitat, which they use for shelter, browsing for food, access to mineral licks, and water bodies.

Caribou’s predators include humans, bears, wolves and golden eagles. Diseases and Parasites also affect life expectancy. Males live up to 13 years and females up to 16 years. When captive, they both live around 20 years. A lot of calves fall prey to the predators.

The Moose matures around the age of 4 to 6; however, many fall prey to predators like bears and wolves even before they are 6 weeks old.

A moose survives for 15 to 20 years. Tigers in Siberia, Brown bears, Wolves, Pumas, Wolverines are common predators. A few of them also get killed in vehicle accidents.

To conclude, the following is a list of differences between the two.