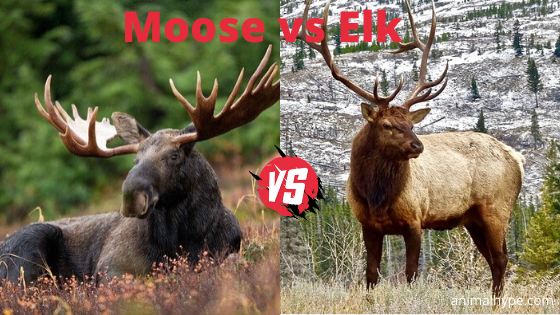 Moose and Elk are majestic animals that are distant relatives of deer. These animals are known for their massive size and huge antlers. Though moose and elk look similar to each other, they aren’t the same. Moose and elk are different species that have a lot in common. Due to which it can be quite tricky to identify them accurately.

So, what are the differences between moose and elk? The most notable difference between the moose and the elk lies in the shape of their antlers. Moose have large and flat antlers that can span 6ft between the tips whereas, elk have elongated and branched antlers. Also, moose are generally larger than elks.

Moose are larger than elks. The adult moose can grow up to 6.5ft tall (from hooves to shoulders) while weighing more than 300kg. Elks are usually 5ft tall and weigh less than 300kg.

In this article, we will have an in-depth look into moose and elk appearance, diet, habitat, and behavior and discuss the similarities and differences between a moose and an elk.

Moose and elk look almost the same except for the shape of their antlers and color of their fur. But if you look closely, you can see that they both differ in size too. In this section, we will have a look at the differences between a moose and elk based on:

Moose are the largest among the two. They can grow up to 6.5ft tall (from hooves to shoulders) and weigh a staggering 350kg on average.

Moose are also found to show a small degree of sexual dimorphism where the males tend to be larger than the females. For instance, an adult male can weigh a staggering 360 to 600kg while the females only weight around 270 to 400kg.

Elk isn’t as tall or heavy as the moose. An adult elk can be 4 to 5 feet tall from hoof to shoulder and weigh 147 to 499 kilograms.

It is important to note that the elk’s antlers can grow up to 4ft, making them appear taller than the moose. Similar to the moose, elk also shows a small degree of sexual dimorphism. Apart from the males being taller and heavier, the female elk lack antlers.

The first thing we all would notice while spotting a moose or an elk would be their antlers. If you have seen them, you might also know that the antlers of the two look very different from one another.

Moose have large yet flat antlers that can span almost 6ft long from the edges. Though it may seem that moose use their large antlers for defending themselves against predators, it isn’t the primary purpose.

They primarily use their antlers for mating displays and to forage underwater for food. Moose grows their antlers during spring and summer and shed them during winter. It is important to note that the antlers’ size tells a lot about the age & health of a moose.

Apart from being used for self-defense, foraging, and as a symbol for mating, these antlers enhance their hearing abilities. Moose, in general, can rotate their ears easily, giving them stereophonic hearing ability.

In a recent study, it was found that the antlers of the moose act like an amplifier and that it can amplify sound by almost 20%.

Unlike the moose, the antlers of elk are elongated with many points protruding from the main branch. Though the elk’s antlers look different from that of a moose, they serve the same purpose, and both grow and shed their antlers at the same time.

Like the moose, elk shed their antlers during summer when their testosterone levels are at the lowest mark. Owing to the low levels of testosterone, the bone which connects the antlers to the skull deteriorates, and eventually, the antler falls off.

When it comes to hunting, the best way to identify the animal is by using its tracks. Moose have large hooves that are pointy at one end. Having pointy hooves can be attributed to the fact that moose don’t migrate much, unlike the elk.

Due to the pointy tips of the hooves, the tracks will have the shapes of elongated hearts. As said earlier, moose are heavier than the elk, which means that the tracks of the moose are going to be a bit deeper than that of the elk.

Elk are animals that travel in packs because of which the track would have prints of a heard of elk. With the onset of winter, elk can be seen traveling almost 100 miles down the mountains in search of food and habitat. These elk migrate back to the heights during the beginning of spring.

Due to elk’s migratory behavior, they have large and rounded hooves that help them traverse such long distances. Elk isn’t as heavy as the moose. They have a lighter footprint than the moose.

Another essential thing to note about elk is the fact they migrate in herds, which can be identified from the tracks that leave behind.

The thick fur is, in fact, a double-layered coating with thick and long hairs on the outside and an inside layer of guard hairs.

This honeycomb structure helps the moose and elk keep the water out while they dive underwater in search of food. It is important to note that the thick fur starts shedding at the beginning of summer.

The only difference in the fur of a moose and an elk lies in its color. Moose have a darker fur than the elks and appears black.

Now that we have discussed their morphological characteristics, let us have a look at their social behaviors and habits.

As said in the previous sections, moose are solitary animals whereas, elk are not. Elk tends to travel in herds. The only time you would see a moose travelling with other moose will be either during the mating season or when the female (cow) travels with the calf.

Both elk and moose shows considerable levels of aggression. Many things can potentially make them stressed and agitated, such as being confronted by dogs, traffic, when they are hungry or tired, and most importantly, when humans get too close to them.

But that being said, they aren’t going to draw first blood. The best thing to do If you spot a moose or an elk is to maintain a safe distance from them and find an alternative route.

Similarly, if you spot a moose or an elk resting under a deck or up against your house, don’t try to chase them away or approach them. There are high chances for them to get aggressive and to attack.

Diet of a Moose and Elk

Both the moose and elk are herbivorous animals whose dietary patterns change with the climate. Though they are both herbivorous, the way the forage and the food that they eat differs.

The most notable difference between the dietary pattern of two lies in the fact that moose browse whereas, elk graze. Moose are choosy eaters whereas elk aren’t.

Being a big animal, moose needs a lot of energy. Most of the energy is derived by eating forbs, non-grasses, and fresh shoots from trees.

It is interesting to note that though they derive most of the energy from these plants, they still take the effort to dive into swamps and other water bodies to consume the aquatic plants.

Moose are animals that need sodium in high quantities, and they rely on the aquatic plants for sodium. During winters, moose can be seen licking on the salt that is sprinkled on the roadways to melt the ice.

Elk too has a similar dietary pattern as that of a moose. Unlike moose, elk tends to most of their feeding in the mornings and evenings. Being ruminants, elks need to rest after consuming food in the morning and evening for the food to digest.

Can Moose and Elk swim?

Yeah, contrary to what most people say, moose and elk are excellent swimmers. In fact, they can both swim within days after their birth. It is interesting to note that in the wild, moose, and elk can be seen swimming across adjacent islands in search of better foraging ground and for other reasons.

In this section, we will have a look at the most common reasons as to why moose and elk swim.

For the aquatic plants

As said earlier, moose and elk are animals that need high quantities of sodium in their diet. Owing to which they dive underwater to come up with the aquatic plants that are rich in water.

It is essential to keep in mind that though they are excellent swimmers, they are still mammals and cannot breathe underwater. So they dive into the water by holding the breath and closing their nostrils using a specialized membrane.

Moose and elk use their huge antlers to uproot the plants and surfaces with it. Foraging for aquatic plants can be mainly seen when winter is about to be over. When the ice starts melting, moose and elk dive into the water for food.

Some times after an exhaustive journey or run, they can be seen standing in the water doing nothing. By doing this, they are taking the stress out of their legs giving them better protection against arthritis and osteoporosis.

To evade the predators

Though moose and elk are huge, they aren’t safe from the predators. For them, evading predators by running is not a feasible option. Moose and elks cannot outrun their predators owing to their staggering body weight. For them, the best way to evade predators is to stay in deep waters.

Did you know that both the moose and elks are crucial for the sustenance of the aquatic ecosystem?

One of the vital nutrients needed for the sustenance of life on the planet is nitrogen. Due to the extreme winters in the natural habitat of a moose, plants rarely have any access to nitrogen.

When the moose dives underwater in search of food they disturb almost 100 square meters of the lake bottom. This, in turn, helps in better nitrogen distribution.

It is this nitrogen that aids the growth of plants in the geographical region moose and elk are found in.