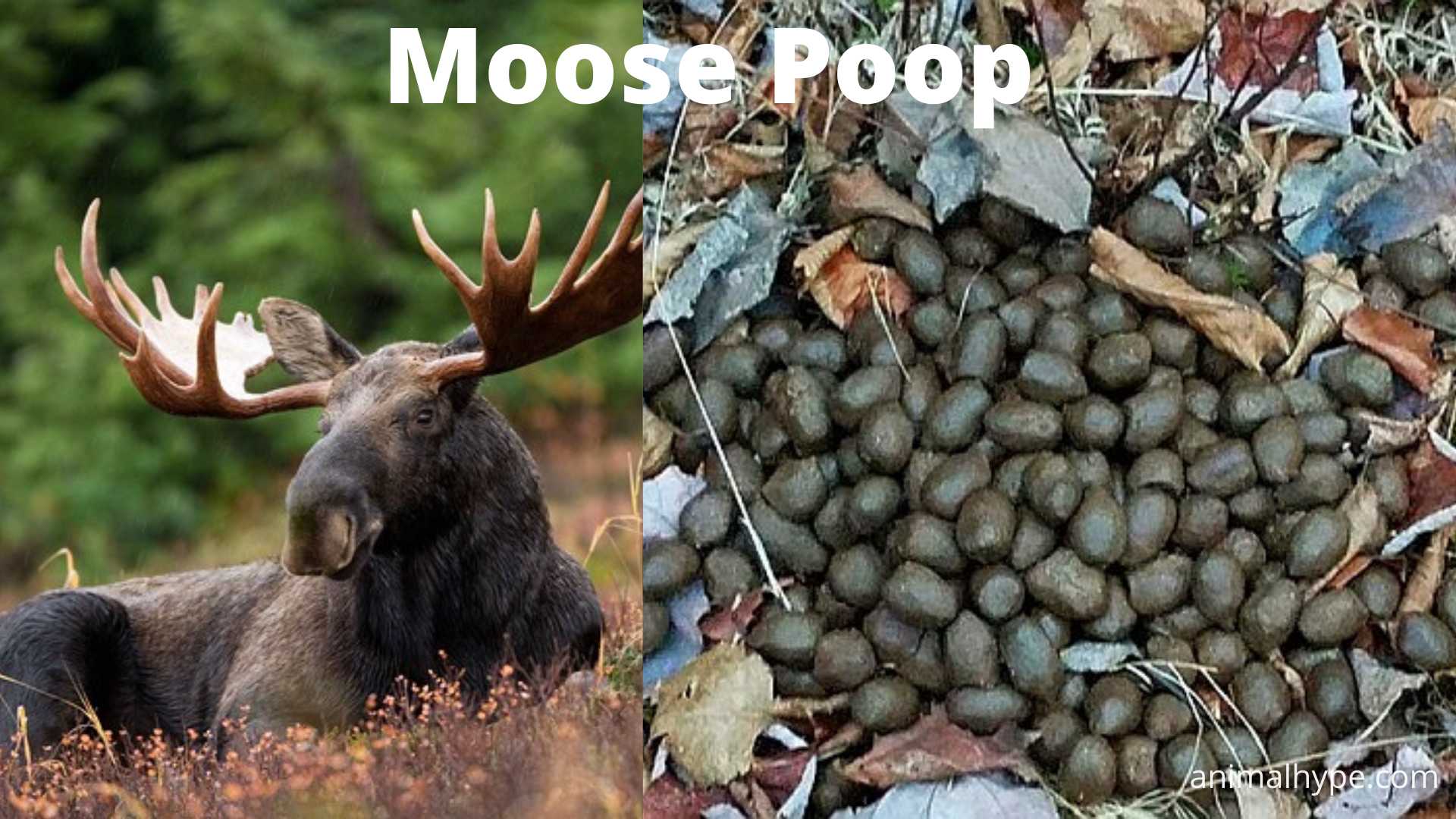 A gentleman by the name of Troy asked me what does moose poop look like. He wrote, “I have seen some stuff on there [Google Images] but I have never encountered this before and I don’t know if it’s bad moose or bad picture.” Now, originally I offered to help him out in a private Facebook message…then had an interesting conversation with him (and others) regarding the topic. This eventually led to some laughs and ultimately the question: What Does Moose Poop Look Like?

Moose scat can take many forms, depending on the season. During winters, moose scat is shaped like oval balls about 1-1.5 inches long and 0.5-0.8 inches in diameter. In the warmer months, Moose may commonly produce scat that is mushroom-shaped or looks like a dumbbell. The color varies between dark brown and black. The texture is hard and dense.

Moose are the largest members of the deer family that are commonly found in North America. These giants can weigh anywhere between 400 to 800kg and stand tall as high as 6.5ft.

In many parts of America, especially Alaska, moose, and humans, choose to coexist in low-lying areas, and they have been successfully doing it for a long time.

Though moose are not known to be aggressive, they can lose their cool at times. It would be best if you kept a safe distance from them. If you are going on a hike alone or If you are someone living in a moose territory, you must realize the presence of moose in your surroundings on time.

The best way to know their presence is from their scat. Though it may sound easy, it isn’t. The droppings of a moose differ with the climate and the food they eat. Owing to which moose scat can have close resemblance with the droppings of a bear and cow. You must understand the effective ways to correctly identify a moose’s poop.

Moose poop has a different appearance during each climate because of the food that they eat and the varying availability of water.

During winter when green vegetation is scarce, moose scat will seem to be more like dry oval nuggets and are often found in piles.

With the onset of spring and the snow recedes moose start eating grasses and the availability of water increases. This means that during spring moose scat may look similar to cow dung.

The best way to identify a moose poop at any time is to closely inspect it. Moose are ruminants and they properly digest everything that they eat. Owing to which their poop has to have a fine and consistent texture.

Similar to all other animals, the appearance of the moose poop depends on what they eat.

Moose are herbivorous animals that mainly feed on leaves, bark, and twigs from trees and shrubs. If you have seen a moose, you might understand how difficult it can be for them to bend their neck down to eat low-lying grass.

Due to this, they prefer to eat barks, twigs, and leaves from the low-lying branches of trees. Moose are also capable of diving under ponds and other water bodies and eat aquatic plants.

Owing to their bulkiness, a moose has to consume about 9700 calories a day to maintain its weight. To meet this calorie requirement, moose eats about 35kg of food a day.

Considering the punishing winters in the regions in which they are commonly found, their diet varies with each climate. It is this adaptation that has helped them thrive.

Also, moose can’t get into ponds or marshy land to eat the aquatic plants due to the harsh winter. Their poop during winter looks like dry oval nuggets and is found in piles.

With the onset of spring, greeneries start to come back. During this season, a moose goes back to foraging in meadows and fields where nourishment is plentiful.

They can also be seen foraging on ponds and marshy lands in search of aquatic plants. Owing to which moose droppings soften and glom together during spring. Depending on the number of aquatic plants and wet vegetation they eat, their droppings can look like cow dung.

In short, moose poop can have different appearances during different climates. The scat of a moose may appear like dry oval nuggets that are left in piles during winter. Whereas, during spring, it can closely resemble cow dung.

Either way, owing to them being ruminant animals, their scat would have a consistent texture, and there won’t be any undigested or partially digested leftovers in their scat.

Identifying a moose scat can be a bit confusing. As said earlier, the appearance of their scat varies with the climate and the food which they eat.

Apart from this, during winter, the moose droppings greatly resemble the bear scat, whereas, during spring, it resembles the scat of a cow.

To correctly identify a moose scat from that of a bear, you need to understand the difference in the diet of the two animals.

Bears are omnivorous animals known for their diverse diet ranging from berries, grain, fish, insects, birds, and mammals. Bears are even found to hunt down moose! Owing to which bear scat appears dark.

Another important thing to note about bears is that they have a simple digestive system. Bears are not capable of digesting everything that they eat. Lots of what they eat come out undigested.

If you inspect a bear poop with a stick, you can see that there would be undigested berries, leaves, and hair on the bear scat.

This isn’t the case with a moose scat. Moose are ruminants and are capable of thoroughly digesting everything that they eat inside the 4 chambers of their stomach. Owing to which their droppings are very fine and of consistent texture.

The easiest way to identify a moose scat is to closely examine it with a stick to see if there are any undigested food particles in it. If there aren’t any, you can’t rule out bear from the equation.

In many parts of Europe and North America, Moose and Elks are considered the same because they belong to the family of deer. But some people consider them to be different animals.

If you have seen a moose and an elk, you might know that they don’t look the same except for their antlers. Elks are smaller and slenderer than the moose. Though they have differences in their physical appearance, their dietary patterns and behavior remain the same.

Similar to the moose, the diet of elks also varies with the climate. During spring, they forage on meadows and farms, whereas they resort to eating twigs and bark of trees during winter.

Owing to this, their scat can appear similar to that of a cow’s during spring and like dry oval nuggets during winters.

Also, on a closer look, you can see that moose droppings are larger, lighter in color, and contain more cellulose material than the scat of elks.

Apart from this, elk poop, in general, has more moisture content than moose poop and hence smear when you accidentally drag your boot over it.

Can Moose Scat Be Used as A Fertilizer?

Yes, moose scat can be used as an organic fertilizer in your garden. Considering the different diets of moose during spring and winter, it is best to use the scat that’s left during spring.

It has been found that moose droppings are rich in vital nutrients. The poop contains 74 percent moisture and has an NPK of 2.5 percent N, 1.8 percent P, and 1.2 percent K, along with 1.2 percent zinc, 1.6 percent calcium, and 0.7 percent magnesium.

As said earlier, the nutrient worth of moose droppings entirely depends on what time of the year do they produce them. Due to the low nutritious diet in winter, the droppings left behind aren’t found to be as nutritious as their scat during spring.

This difference arises from the fact that during spring, the diet of moose comprises green, leafy stuff that is nutritious than bark and twigs.

Apart from being rich in vital nutrients to plants, the moose poop is also rich in other organic materials that can maintain a good soil structure. Due to this, the water retention capacity of soil increases.

That being said, it is important to note that the moose poop doesn’t decay fast, and it may take a while before it disintegrates.

Like we said in the introduction, this is has been a comprehensive guide to moose scat identification.

I hope you’ve enjoyed this informative article and now know the key steps to identify moose poop!  Now that you’ve read our guide, you’ll be much better prepared for your next encounter with moose scat.

Come back soon for more exciting adventures from our team of curious animal lovers.