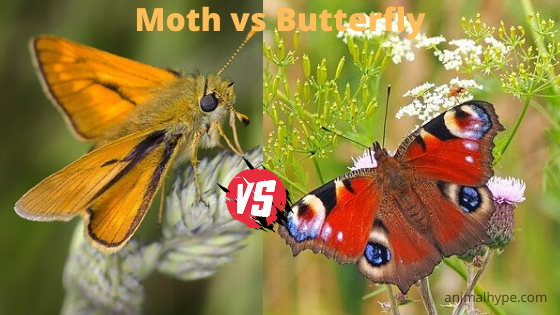 Most of us, at some point in time, would have wondered whether butterflies and moths are the same. Some would have had a difficult time correctly identifying them. They both look almost alike, and it is quite tricky to differentiate them accurately.

Have you ever wondered why do they both look kind of alike? Is it because they are the same? Or are they different from one another?

Moths and butterflies belong to the order of insects known as Lepidoptera but they are of different taxonomic classification. This means that though they both belong to the Lepidoptera family of insects they aren’t the same. They both have many striking differences when it comes to morphological features and physical behaviors.

The major difference between the two lies in their antennas. While the butterflies have long, needle-like antennas that are hooked at the ends, moths have flat & feathery antennas that are not hooked at one end. Irrespective of the differences the antennas are used by both insects for the same purpose which is to detect a potential mate by sensing their pheromones.

In this article, we will have a look at the other differences between the two starting from cradle to grave. Let’s get going.

The lifecycle of a Butterfly and a Moth

The pupa is an intermediate stage in the lifecycle of a butterfly and moth where the caterpillar is fully developed but hasn’t become a winged insect. During the caterpillar stage, they keep munching on the leaves to store sufficient energy to consume during the pupal phase.

A pupal stage is where a fully grown caterpillar undergoes a metamorphosis. It is during this considerable phase change happens to the body of a caterpillar. Wings, antennas, legs, and other distinctive morphological features are formed in this stage.

There are notable differences between the pupal stage of a butterfly and a moth.

Pupa of a butterfly 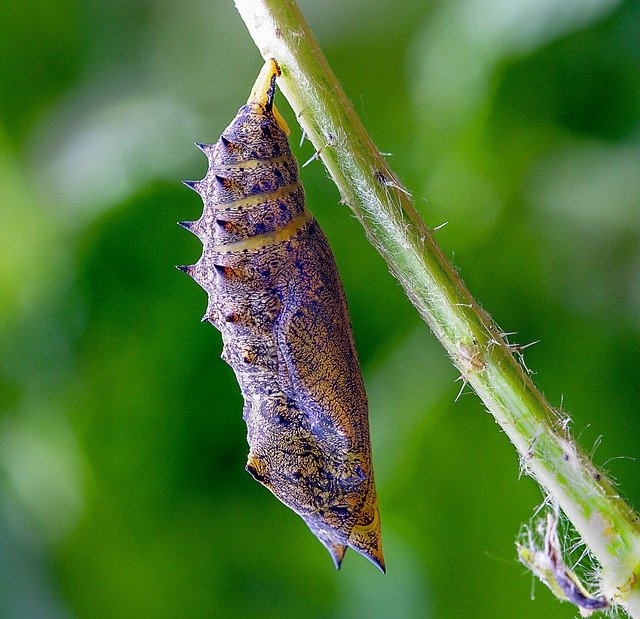 Most of us might have heard that during the pupal stage the caterpillars cover themselves by spinning silk around their body. This isn’t the case with butterflies. Butterflies do not cover themselves with silk. Rather they resort to Chrysalis.

A fully grown caterpillar of the butterfly makes a button of silk and uses it to fasten itself to the underside of a leaf or a twig.

Once they have secured themselves to a surface they start losing their outer skin for the last time (the last molt). Beneath this skin would be a hardened skin called Chrysalis which is made up of proteins. If you have a closer look at the Chrysalis, you can see that it is hung by the tip of the pupal abdomen.

It is inside this Chrysalis the caterpillars undergo growth and differentiation which is often termed as metamorphosis.

Towards the end of the pupal phase, the winged butterfly tears the Chrysalis by softening it with cocoonase enzyme and comes out.

It is important to note that the wings of the butterfly would be hard when it emerges out of the shell. Once it is out from the shell, they pump hemolymph to their wings which eventually spreads them.

Pupa of a Moth 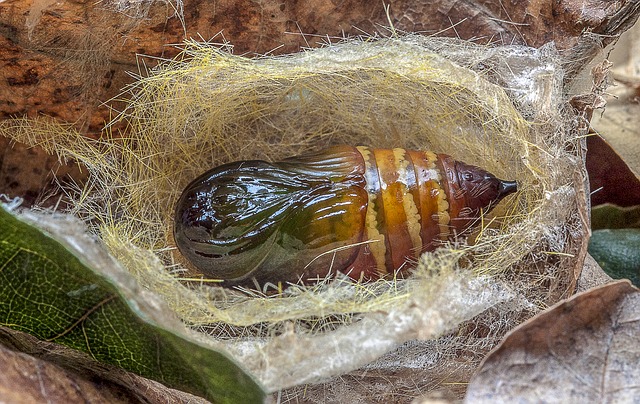 Similar to that of a butterfly’s caterpillar, the caterpillar of a moth spends most of the time munching on leaves storing energy.

Once the caterpillar has become big enough it enters the pupal phase. Before pupating the caterpillar sets off to find a safe spot to pupate. Depending on the type of moth the pupa can be seen hanging from branches, hidden in leaves or buried underground.

The pupal phase begins with the caterpillar winding a cocoon of silk around its body like a protective layer. Depending on the type of moth, the cocoon can be circular or mesh-like; also the color may vary.

It is inside this cocoon, the moths undergo metamorphosis. It is important to note that the silk that is used in making the cocoon has a lot of economic value. The silk from the pupal phase of a silkworm moth is indeed an expensive commodity that has a huge demand across the globe.

Once the moth caterpillar undergoes full metamorphosis, it breaks the cocoon and comes out as a winged moth. Similar to the butterflies, the moth too uses specialized enzymes such as the cocoonase to soften the cocoon.

In short, the difference in the lifecycle of a butterfly and moth lies in its pupal phase. While the moth pupates inside a cocoon made of silk, butterflies pupate inside Chrysalis which is nothing but a hardened skin made out of specialized proteins.

Now that we have an understanding of the difference in their lifecycle let’s have a look at the other anatomical and morphological differences between them.

Anatomical & Morphological Differences Between a Butterfly and Moth

The antennas on the butterflies and moths are primarily used for sensing smell. The females when they are ready to mate secretes pheromones which the male picks up through their antenna. Apart from this, the Antenna plays a crucial role in helping them balance their body during flight.

A specialized organ present at one end of the antenna called the Johnston’s antenna maintains its balance. It has been found that the antennas of both the moth and butterfly vibrate at the same frequency as their wings beat.

Another important difference lies in the pectinations, which are the lateral filaments on the antenna. Moths are capable of folding these pectinations while not in use whereas, the butterfly cannot.

Moths connect their hind wings and forewings with a fringe called the frenulum whereas, a butterfly lacks frenulum. This connection with a frenulum cannot be spotted easily and needs a close inspection while holding the moth close. The frenulum is connected to a lobe in the forewing called a Jugum.

Colour of the wings

This is probably the most notable difference between a butterfly and a moth. Butterflies are insects that are active during the day and being virtually defenseless; the only thing they can do is hide. 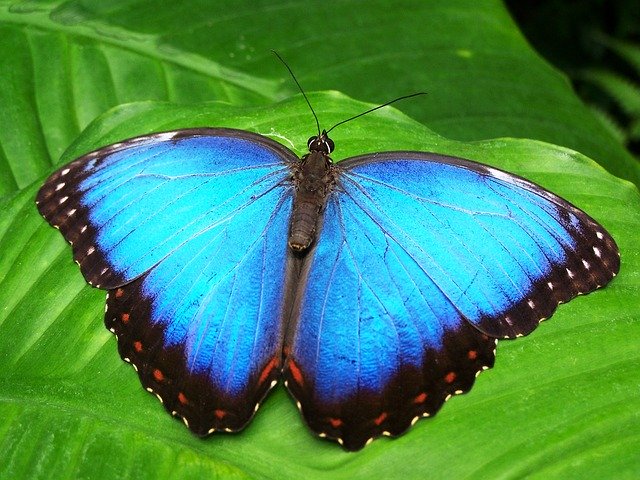 That being said, not all butterflies have vibrant colors. The crepuscular butterflies that fly at dawn and dusk have dark and dull colors.

Moths are nocturnal insects, and having vibrant colors is of no use to them. So most nocturnal moths have dull colors. Due to which they rely on weaving patterns, sound, and smell to locate each other. Well, that doesn’t mean that all moths are dull. Diurnal moths such as the buck moths have vibrant colored wings.

But yeah, butterflies, in general, are found to have vibrant colored wings while the moths have dark and dull sides. This is an easy way to distinguish a moth from a butterfly.

If you have a closer look at moths and butterflies, you would see that they have a lot of differences when it comes to their body. Moths tend to have what may appear to be a long snout and body covered in fur.

This isn’t the case with butterflies that have a slender body and smooth abdomens. Owing to the fur in the body of a moth they might appear to be fluffy than butterflies but in reality, it’s just the fur on their body.

It is interesting to note that moths having fur and butterflies lacking fur are in fact an adaptation. Moths being nocturnal, the thick fur keeps them safe during cooler nights while also giving them stealth.

The fur gives the moth additional protection from bats because of its ability to confound echolocation. Whereas, in the case of butterflies being diurnal, lack of fur helps them during extreme heat while facilitating better absorption of sunlight.

Though both the butterflies and moths have compound eyes, they aren’t universal. Due to the diurnal nature of butterflies, they have apposition eyes.

Apposition eye is a type of compound eye where each eye of the compound structure captures an image and combines them to a single image in the brain.

Have you ever spotted a butterfly flying at night or a moth active during the day? It is because butterflies are diurnal whereas, moths are nocturnal.

It is interesting to note that some scientists claim that the nocturnal moths navigate using distant celestial objects like the stars and moon.

It is believed that they align themselves on a fixed angle with respect to light from the moon and stars. On a cloudy night when the position of moon and stars aren’t clearly visible, moths resort to navigating using the earth’s magnetism.

Position of wings during rest

The position at which butterflies and moths rest their wings is different from one another. Moths generally keep their wings wide open while they rest whereas, butterflies keep them closed.

That being said butterflies do keep them open at times while they are basking under the sun. Similarly, moths do keep their wings closed when they are in tight spaces.

Do Dragonflies Bite or Sting?