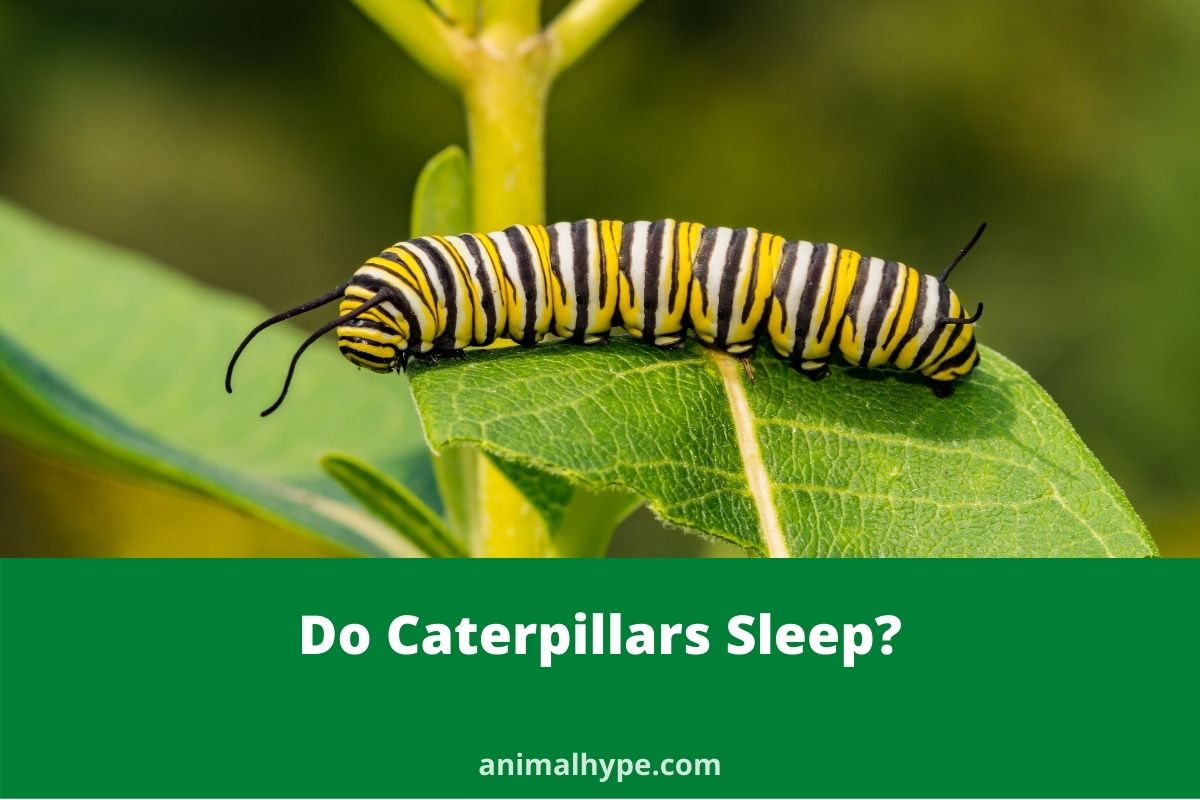 The term “caterpillar” refers to the larval stage of butterflies, moths, and sawflies, in which they appear to be small, worm-like insects that keep feeding on foliage until they are ready for their transformation. You can’t judge from a caterpillar’s appearance how their adult versions would look like because the two are hardly anything like each other. We have all heard of the caterpillar’s insatiable hunger, but what do these little worms do when they are not eating?

Do caterpillars sleep? Yes, caterpillars do sleep. However, their definition of sleep is quite different from our understanding of the term. They perceive sleep as a brief period of inactivity when they take rest. The sleep schedule and duration of the caterpillar varies with individual species. However, right before their transformation, they can remain inactive in their chrysalis for about 5-21 days.

Have you seen a caterpillar tucked under a leaf and wonder if that’s how they sleep? Or are you curious about their hibernation? In this article, we will tell you everything you need to know about the caterpillars’ sleeping schedule.

When do caterpillars sleep?

The sleeping schedule of a caterpillar highly depends on their nature, whether they are nocturnal and diurnal. If the caterpillar belongs to a nocturnal butterfly or moth species, they will usually rest during the daytime. However, if they are one of the diurnal species, they would remain inactive at night.

Caterpillars do not sleep for about 6-8 hours as we do, so it’s very easy to miss their nap time. If you don’t find them sleeping for a couple of days, you needn’t worry. As long as they are feeding at their normal pace, they are completely healthy.

How long do caterpillars sleep for?

As we mentioned earlier, the duration of their sleep can vary from one individual to the other. Some caterpillars will rest for 10 minutes, while others can remain inactive for several hours. Some species take rest only once throughout a day, and yet others can sleep several times a day.

Do caterpillars sleep under a leaf?

Although a caterpillar’s sleeping or resting manner can vary from species to species, most of them are often found hidden under a leaf when they are resting. And as soon as they are active again, they consume the very leaf they were resting under.

Do caterpillars hibernate in winters?

Hibernation is a deep, slumber-like state in which the animals remain inactive to get through the harsh winter.

Although hibernation is not a normal life stage for the caterpillars, there are times when these little worms can feel the winter approaching before they have had the chance to transform into butterflies or moths. And while winters are harsh on all animals, they are even more brutal on these fragile little beings. If they’re exposed to this climate, their survival might be threatened.

Therefore, to cope with the environmental changes and protect themselves against the cold, the caterpillars enter hibernation. There could be another reason for their hibernation, although it is very rare: when the plants they feed on shed their leaves in the fall and they have nothing to eat.

There are two ways in which the caterpillars hibernate. The first process is called “Freeze Tolerance”, in which the outer cells of their body create a protective coating in order to provide insulation to the internal cells.

Another technique adopted by them is called “Freeze Avoidance”, in which they eliminate their gut content which could freeze. The caterpillars then binge-feed in order to store enough nutrients that would last even the longest hibernation period.

Do caterpillars sleep during their transformation into a butterfly or a moth?

If by sleep, you mean that they remain inactive, then yes, they do. Once the caterpillars have met their nutrition requirement and are ready for the metamorphosis, they hang themselves upside down by a self-produced thread and wait for the pupa stage’s initiation.

After entering the pupa stage, they sleep until the pupa develops into a chrysalis, after which it takes them about 5-21 days to transform into butterflies or moths.

Do caterpillars sleep a lot?

It depends on your definition of “a lot”. If you have not seen them active in the past couple of days, it is not a good sign. Caterpillars do not normally rest for that long. If they are, it has to mean that they are starving and could be on the verge of dying. Or they could be dead already.

Do caterpillars have more legs than their adult version? It is a common misconception that caterpillars have too many legs. In reality, they have only 3 pairs of legs, just like their adult butterflies or moths do. All the other leg-like structures on their tiny body are false legs known as “prolegs” that merely help them in climbing.

How many eyes does a caterpillar have? On each side of its head, a caterpillar has 6 tiny eyelets arranged in a semi-circular formation, containing 12 eyes in total. However, all these eyes don’t give them an extraordinary vision. These crawling worms can barely differentiate between light and dark.

Do caterpillars eat their own shell? Yes, once they hatch from their eggs, the remainder of the eggshell becomes their first meal. It is because the outer layer of their shell, which is called “chorion”, is rich in protein and can give them a healthy kickstart.

To sum it up, caterpillars do sleep, because just like all the other animals, these little worms need rest as well. In fact, eating and resting are the only two activities that they perform. Most of the caterpillars are nocturnal and remain inactive during the day, feeding throughout the night. However, this doesn’t mean that there are no diurnal caterpillars. If you observe them closely, you will come to learn a lot about how they sleep.

25 Species of Caterpillars Found in Illinois (Some are Poisonous)