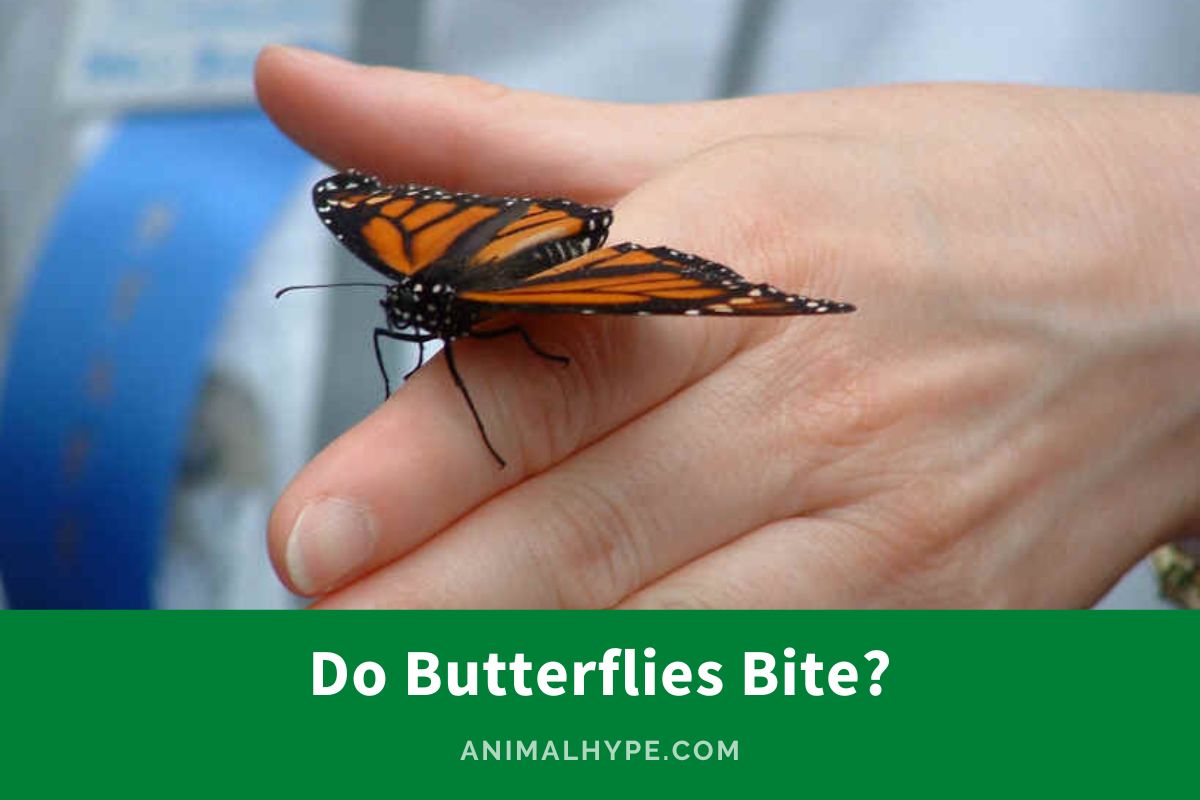 Seemingly harmless and graceful, butterflies are indeed a magnificent creation of nature. But are they really safe and gentle as they look? If they are, why do we see kids scream and duck when butterflies come flying? Also, why do some people show an allergic reaction to butterflies? Is it because of their sting or bite?

In this article we will discuss in detail about butterflies and give you the answer to the million-dollar question, Do butterflies bite?

No, Butterflies do not bite because they do not have the necessary mouthparts to land a bite. Their jaws are gone and they only have a long and tubular curved trunk (called proboscis), which is like a soft straw. The proboscis is designed to suck the nectar out of flowers and not to bite.

According to The Key West Butterfly and Nature Conservatory, butterflies are considered to be the models of innocence, they do look like one; isn’t it?

Do Butterflies have teeth?

No, butterflies do not have teeth. If you carefully observe a butterfly flying in your garden and flitting from flower to flower, you can see that they do not chew up their food; instead, they sip liquids from the flowers.

It is important to note that, the caterpillar of a butterfly has teeth which they use to chew up the leaves on which they live.

When they transform into a butterfly, they lose their teeth because at this point when they are winged creatures having excess weight is not going to do them any good.

What do Butterflies eat?

As discussed in the earlier sections, butterflies lack teeth, and they mainly feed upon various liquids found in plants.

Most butterflies are seen to consume nectar from flowers, and some may eat from pollen, tree sap, cow dung, water, or rotting fruit too. Adult butterflies are found to be selective about what they eat.

These winged creatures, unlike a caterpillar, can forage a much broader territory in search of the food they like. It is important to note that butterflies prefer to feed in sunny areas protected from the wind.

Each member of the butterfly family has a different strategy to gather fluid nutrients. Male adult butterflies are found to use mud-puddling to collect sodium and amino acids.

During puddling, fluid is pumped through the digestive tract and released through their anus. It is estimated that fluid of up to 600 times their body mass may pass through a butterfly every day.

Did you know that sometimes they are even attracted to the salt that is in human sweat?

How do butterflies eat without teeth?

Before we discuss how do butterflies eat without teeth, you need to understand the fact that you only need teeth If you are consuming solid food.

Butterflies do not eat the leaves or flowers around which they are seen to flint. Instead, they feed on the nectar from flowers so they don’t really need teeth!

Butterflies have an elongated tongue-like organ called the proboscis that extends from the front of their head. The proboscis is a straw-like tube that coils up when not in use. When butterflies identify a flower with nectar in it, they extend their proboscis deep into the flower and sip nectar and water from it.

Butterflies mainly feed on nectar and fruit, which is nutritionally more like a human attempting to live on only sugary soda. Though the nectar is high in calories, it is low in nutrient contents. This explains why a butterfly has a short lifespan of only a few weeks.

Butterflies are the commonly seen beloved cultural icons in ancient artworks. But did you know that they aren’t as enchanting as they look?

Butterflies are widely seen congregating around the mud, cow dung, blood & decaying flesh of organisms. Quite an odd behavior from the cultural icon, huh?

Very little is known about this bizarre behavior shown by butterflies. But from whatever little we know, there are a couple of interesting observations that may contain the answer for this intriguing behavior.

Male butterflies are most commonly seen congregating over this dirt, and they are widely seen drinking from the mud too. Every time they drink from the mud, they are found to pump out fluid from their abdomen.

The fact that female butterflies are not seen anywhere near the dirt and only males are found to congregate coupled with the abdomen secretion points to a new direction. Biologists believe that the butterflies are not there to simply absorb water; instead, they are there searching for something else.

Scientists and biologists claim that the male butterflies congregate on mud primarily for salts it contains. They are found to absorb the salts and amino acids which play a crucial role in the physiology of butterflies.

It is also believed that the sodium being taken up by the males’ aids in reproductive success. This extra nutrition transferred to the eggs through the female (while mating) ensures that the eggs survive.

The Zebra longwing butterfly is the one with a unique adaptation that allows them to live much longer.

These butterflies, while collecting nectar, collect pollen on the outside of their proboscis and excrete stomach acids through the proboscis on to the gathered pollen.

The digestion happens outside the body of the butterfly after which the liquified food is consumed with the proboscis. This particular diet allows the Zebra Longwing butterfly to live a whopping six to nine months as an adult butterfly.

Not all butterflies are poisonous; only a few of them are found to be toxic. Usually, the poisonous butterflies have bright colors or patterns on their wings, also known as aposematic coloration.

It takes an expert to distinguish a poisonous butterfly from a non-poisonous one. One can say that this is an evolutionary advantage. As almost all butterflies have bright colors or patterns, it becomes difficult for the predators to distinguish the toxic from the nontoxic butterflies.

The Male Paper Kite butterflies that are found in the wet evergreen forests of East Asia use certain nutrients from plants to produce pheromones. A chemical found in these pheromones contains a compound called Danaidone which is a toxin.

Male paper kites when they mate, transfer the toxin along with the sperms to the female. This causes the toxins to end up in the tissues of the female and in her eggs, protecting both from predators.

Then there is another group of butterflies that are nontoxic and they closely resemble the toxic butterflies living nearby. They mimic their toxic neighbors to seek protection from the predators.

These predators generally avoid the toxic models after they eat them once and starts vomiting violently. One such mimicking species of butterfly are the Batesian mimics.

The Batesian mimics comes out of the pupa phase after the toxic species comes out from its pupa phase. By then, the predators’ must have had a taste of the toxins from them and will stay away from them.

Although some members of the butterfly family are poisonous, they are not harmful to humans. Instead, they are toxic only to the predators which consume them.

Butterflies cannot bite you or expose you to their toxins in the course of normal handling. The only chance of a human being exposed to the poison of a butterfly is when he/she bites the poisonous butterfly. You might, at the very least, find it quite distasteful.

In a study conducted by the National Institute for Occupational Safety and Health (NIOSH), it was discovered that the most common symptoms of butterfly allergy included

Apart from these minor trouble, butterflies don’t cause any other serious ailments to humans and are completely safe to be around with.

How do butterflies defend themselves?

Though butterflies are unable to sting or bite to defend themselves, they have other means of defense. The method of defending is not the same for all species of butterflies; rather, different families have different strategies.

Some butterflies are found to make startling noises while some have scales that emit smells to repel predators.
The vibrant wings of the butterfly are their primary weapon of defense for most members of the butterfly family.

These wings are an evolutionary advantage that makes it capable of effectively camouflaging. The beautiful patterns on their wings also help them mimic other large animals and scare away the predators.

Among the many different methods of defense, the most interesting one is the one shown by the brightly colored butterflies have drab underwings.

These butterflies frighten or confuse predators by flashing their wings having vibrant colors. These butterflies also have a slippery, dust-like scales that help them escape from spider webs.

Another exciting evolutionary adaptation shown by a species of butterfly is the long tail at the rear end of each wing. The long tail end of the wing is tempting for the predators. When a predator attacks the wing, the tail tears of the wing, and the butterfly flies away.

Having a cryptic pattern on the wings makes some butterflies capable of camouflage. The Indian Leafwing butterfly, for example, looks very similar to a leaf when it is at rest that only very close inspection reveals that it is a butterfly.

So yeah, butterflies do not bite!

Differences Between Butterflies and Moths