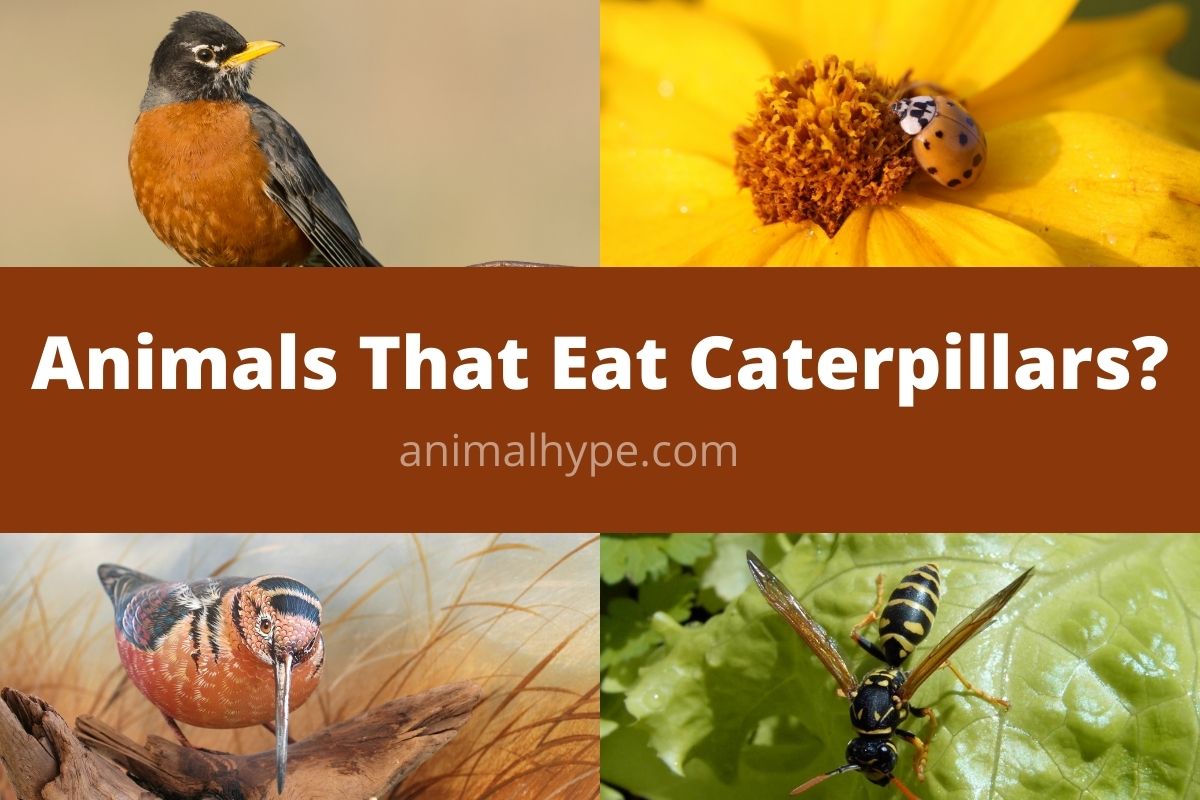 These large green caterpillars are quite a sight to behold and usually will not put up much of a fight when a predator is near. What Eats Caterpillars? Interesting question. I had never really thought about that until recently when we moved into a new house with some nice, and not so nice, landscaping. The area we live in seems to be caterpillar central!

Grosbeaks, Tanagers, Orioles, Cuckoos, and Warblers are the major avian predators of caterpillars. Moreover, insects like Ladybird Beetles and Yellow Jackets, specialize in eating caterpillars. Lastly, humans are known to feed on caterpillars.

Birds, wasps, beetles, and humans are the natural predators of caterpillars.

It might come as a surprise to many, but caterpillars, when consumed as food, are a quite rich source of protein (they make up one of the most abundant sources of protein on the planet!). Moreover, they aren’t incredibly fast either, which makes it easy for a large number of insect-eating birds to target them.

Caterpillars have to deal with everything from birds to larger insects and even reptiles. But how do we find out who eats caterpillars? That’s why I started asking around about what eats caterpillars. I found some interesting answers.

In this article, we’ll discuss the birds and insects that prey on caterpillars and learn how humans fit into this list.

Almost all the insectivore birds hunt for food either in flight or while foraging on trees or ground.

If one such bird comes across a slow-moving caterpillar during foraging, it will certainly snatch the larva without a second thought. Some birds catch caterpillars specifically to feed them to their younger ones.

This section will talk about the bird species that are known to feed on the caterpillars.

The Rose-breasted Grosbeaks are among the larger grosbeak species that belong to the cardinal family. These birds breed in the deciduous forests of eastern North America and migrate to the tropical regions during the winters.

They’re sexually dimorphic, with the characteristic rosy-red patch found only on the breast of the breeding males.

Although the rose-breasted grosbeaks are primarily seed-eaters, their diet also consists of berries, nectar, and insects. Most of the insects they feed on are caught mid-flight, but the caterpillars are caught from the tree-tops.

Although the Scarlet Tanagers belonged to the tanager family earlier, they have recently been moved to the family of cardinals (Cardinalidae).

These songbirds are endemic to the Americas and are the smallest among the other members of their genus.

Displaying sexual dimorphism, the males have the characteristic scarlet body with a black tail and wings. Whereas the females have an olive upper body, yellowish undersides with their wings, and tail toned in yellow and olive.

Scarlet tanagers are omnivores (primarily insectivores) and feed on butterflies, moths, and their larvae, beetles, aphids, wasps, and bees in the summers. Spiders, snails, and worms are a part of their diet as well. During winters, they’re often seen feeding on berries and wild fruits.

The Black-billed Cuckoos are small, New World birds that belong to the Cuculidae family.

Closely related to the Yellow-billed Cuckoos (Coccyzus americanus), these birds have characteristic black, downcurved bill and red eyes. While their underparts are stark white, the head and upperparts are rich-brown in color.

The black-billed cuckoos are known to forage thick shrubs and trees, looking for insects to feed on, particularly the Tent Caterpillars (Malacosoma).

To remove the hairs from the body of these caterpillars (that they cannot digest), they beat them against a branch before eating them. Apart from the caterpillars, they’re also known to feed on bird eggs, snails, and berries.

The Baltimore Orioles are small, migratory birds belonging to the family of the New World Blackbirds (Icterids).

They can be found in abundance in the eastern parts of North America in the breeding season. These birds also happen to be the state bird of Maryland.

Baltimore orioles display sexual dimorphism, with the males have bright orange underparts with an orange patch on their shoulders. Their head, back, and tail are black in color. On the other hand, the females have a yellowish-brown body with their wings colored in a darker shade.

Although they prefer to eat adult moths, they would gladly eat their larvae as well.

The Black-throated Blue Warblers are a species of small passerine birds that breed in the eastern parts of North America. Belonging to the family of the New World Warblers, these migratory birds are sexually dimorphic.

Only the male warblers display the characteristic black face and throat, deep blue upperparts, and white underparts. In comparison, the females have olive-brown upperparts with yellow underparts.

The black-throated blue warblers forage in low vegetations, actively hunting for spiders, crane flies, and caterpillars. When insects are scarce in the winters, these birds might supplement their diet with fruits, berries, and seeds.

The Northern Parulas are small, migratory warblers that are endemic to North America.

Both sexes of these birds are almost similar in appearance with their yellow breast and bluish-grey upper parts. However, the males have a green patch on their back and two white wing bars that their female counterparts lack.

The entire diet of these birds consists of small invertebrates such as caterpillars, locusts, flies, bugs, bees, wasps, spiders, aphids, grasshoppers, and beetles.

The Blackburnian Warblers are a migratory warbler species that breed in North America and winter in Central and South America. Inhabiting the North American coniferous woodlands, these birds were named after the English Botanist Anne Blackburne.

Being omnivores, the Blackburnian warblers forage on treetops looking for spiders and other insects to feed on. The larvae of moths and butterflies make up a significant portion of their diet. In the wintertime, they can also feed on wild fruits and berries.

Both the males and the females have a yellow forehead patch, grey upper parts, and pale underparts. However, while the throat and ear patches of the males are black, they’re light grey in the females.

Although golden-winged warblers are insectivores feeding on spiders and other small insects, they possess an opening musculature around their bill, which helps them uncover hidden caterpillars and eat them.

The Chestnut-sided Warblers are small birds belonging to the New World Warbler family.

These birds get their name from the chestnut flanks that are present on the sides of the males. They have a white face, a grey back with streaks all over, a green crown, and black eyestripes. The females appear to be a washed-out version of the males.

Chestnut-sided warblers are insectivores that forage in low shrubs and trees, gleaning insects and caterpillars from the thick foliage. During winters, they can also feed on berries, nuts, and several wild fruits.

Belonging to the genus of the true thrushes, the American Robins are small migratory songbirds named after the European Robins (Erithacus rubecula).

Although the two birds are not related, they have a similar, reddish-orange breast; hence, the name.

These birds surpass many other species in their family in the ability to switch their diet, which enables them to travel much farther in the migratory seasons.

The Carolina Wrens are the most common wren species found in the eastern regions of the United States. These birds are also the state birds of South Carolina.

They’re fairly large in size as far as the other wren species are concerned, with a brown crown and chestnut-colored underparts. Both sexes appear the same, with the males being only slightly larger in size than the females.

Carolina wrens are ground foragers that usually hunt for prey in leaf litter and lower tree levels. They mainly feed on invertebrates such as spiders, beetles, grasshoppers, ants, caterpillars, wasps, and true bugs. Fruits and seeds make up a small portion of their diet.

Now that we’ve gotten a thorough idea of all the bird species that are major predators of the caterpillars, let’s also explore which insects are known to feed on them:

Also referred to as “Ladybirds” in North America and “Ladybugs” in Britain, the Ladybird Beetles are tiny beetles that are not considered true bugs. These beetles have a bright-colored body with black spots scattered all over them.

Although they primarily feed on aphids, these beetles are also known to eat other kinds of insects, particularly caterpillars. Because of their soft bodies, the ladybirds enjoy munching on them thoroughly.

The Yellow Jackets are a group of predatory wasps that are endemic to North America. In European countries, these insects are simply referred to as “wasps,” which can often lead to confusion.

Although they don’t feed on the caterpillars themselves, they are known to carry them to their nests to feed them to their younger ones.

How many of you are hearing of people eating caterpillars for the first time?

Well, as gross as it might sound, you’d be surprised to know that the culture of eating caterpillars is popular in many parts of the world.

Some examples of these places are East-Asian countries like China and the country of Botswana in Southern Africa.

But why would people want to eat grasshoppers? Does the taste of these larvae appeal to them? Not particularly. The true reason behind their practice of eating caterpillars is the high nutritional value of these little crawling insects.

As a food source, caterpillars are a low-carb, high-protein food that is also rich in healthy fats and minerals like Calcium and Iron.

While the idea of eating an insect might seem disgusting to many, Entomophagy (the process of eating insects) is quite popular in many parts of the world.

About 80% of the countries in the world are, in fact, practicing it. Apart from caterpillars, some of the other common insects eaten by humans are crickets and beetles.

Caterpillars are the larvae of butterflies or moths and are raised in a variety of families: Butterflies (Papilionoidea) and moths (Heterocera). Most caterpillars have about a week to live.

The cocoons made by the larvae protect them for at least some time as they transition into their pupae stage. The pupae can remain dormant for years before emerging as moths or butterflies.

As you learned in this article, many creatures eat caterpillars. Animals and insects that enjoy eating the larvae of moths and butterflies include birds, mammals (including humans), reptiles such as lizards and turtles, spiders, and wasps. Even fish, frogs, and other invertebrates can prey upon this tiny insect larva.

Hopefully, you’ve enjoyed this article half as much as we enjoyed writing it.

Also, if there is a subject that you’d like to see a guide that I can write about or you need help with something, email me.