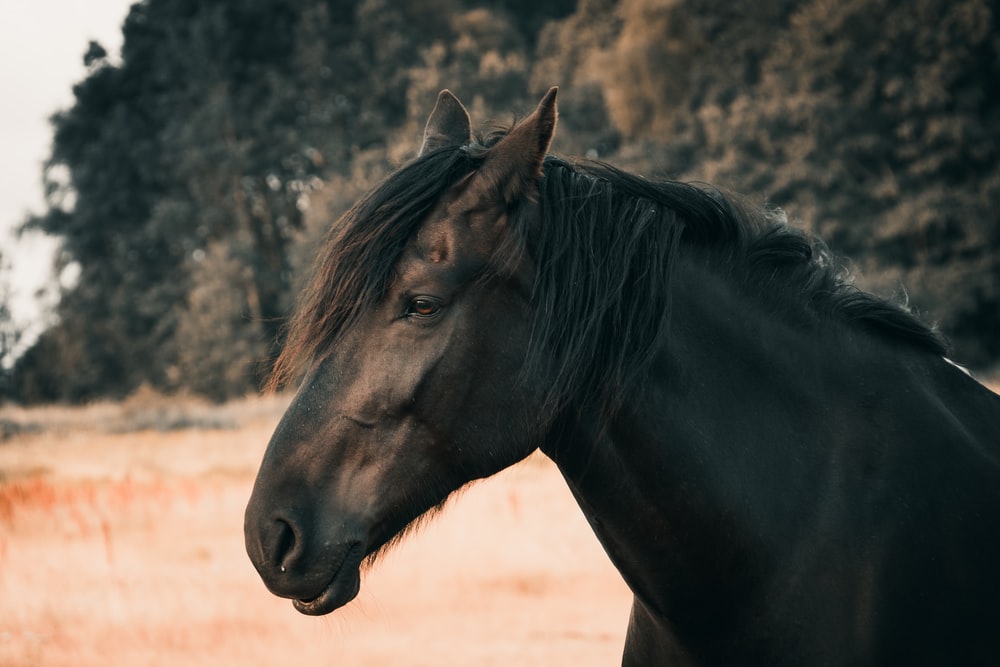 Horses with a completely black hair coat are quite uncommon. Sometimes, people mix up dark bays or chestnuts, but black horses also have black eyes and black skin. They can have some white markings over pink skin, but that has no bearing on the coat’s base color.

Black horses are not restricted to any breed. However, some breeds such as Ariegeois or Fresisan horses tend to be almost always black.

Regardless of what breed the black horse belongs to, most of their coats fade to a dark brown color after exposure to sunlight. Black horses that don’t lose their coat color are “non-fading” black horses.

If you happen to have a black foal that you haven’t named yet, you’ve come to the right place. Our guide on black horse names will help you make a decision that you will be happy about.

Formerly, female horses, which are known as mares, were kept for breeding purposes. However, mares are now used in every equestrian sport.

Female horses below the age of 3 (or 4, in some cases) are known as fillies and those above that age are mares.

That said, regardless of what age group your horse belongs to, you can consider these female black horse names for it.

A male horse is known as a stallion, and a male foal is called a colt. Before, only stallions were used for riding and equestrian sports. However, now geldings are preferred over stallions.

Geldings are castrated stallions. Since geldings can’t breed, there are specific stallions that are used for that purpose. Those horses are known as studs.

So, whether your horse is a stallion, stud, gelding, or colt, you may find these male black horse names helpful. 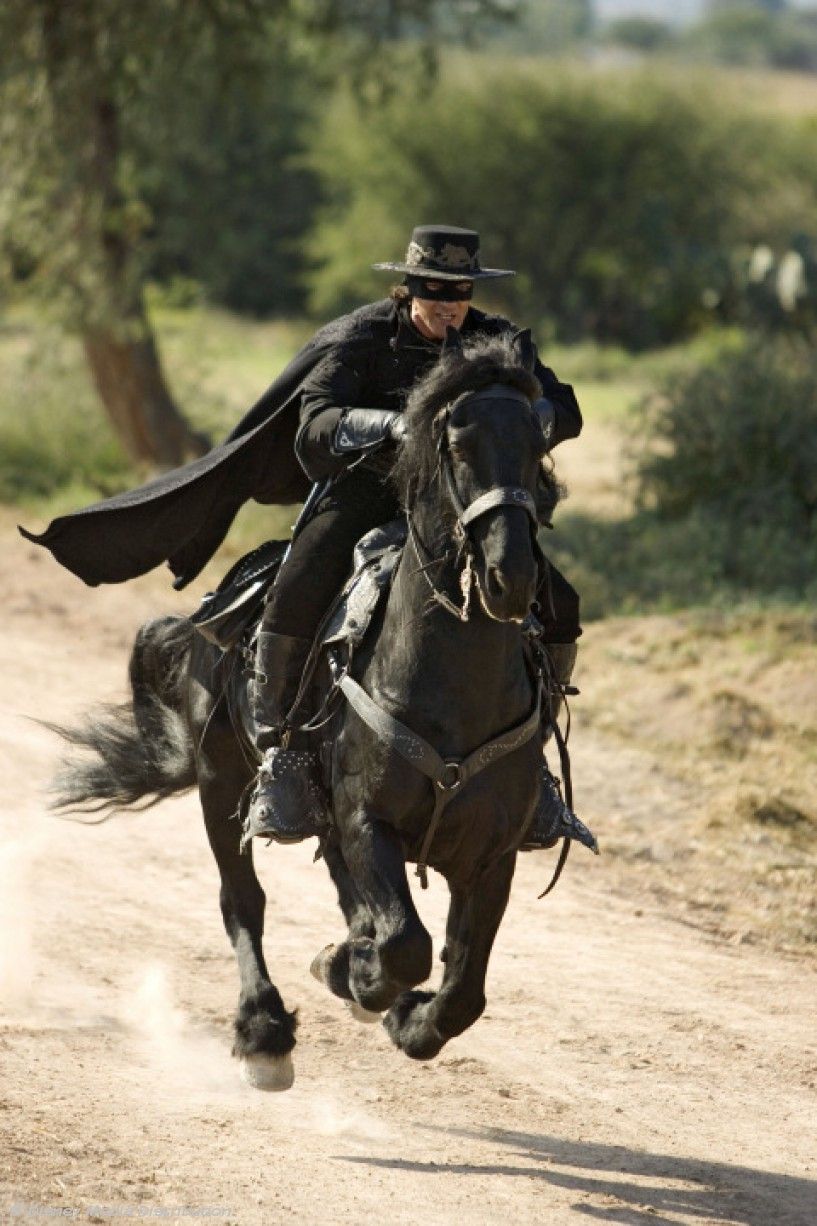 Tornado: Tornado is a character from the films and novels based on the character Zorro. Tornado is a black stallion and Zorro’s horse, which he rides every now and then in the films.

In the film, The Legend of Zorro, Tornado was a black Friesian horse who helps Zorro escape easily during the night.

Here are a few more black horse names in movies for you to consider for your horsey.

Arabian horses are a breed that originated from the Arabian peninsula. These horses are strong and have excellent stamina. So, they’re excellent for endurance racing.

They’re quite fast, too, galloping at a top speed of about 40 miles per hour. However, they’re not as fast as a Thoroughbred.

While Arabian horses may be expensive, their superior characteristics compared to other breeds make them worth it. If you have one of these rare horses in black, here are some names for it.

Cass Ole: This was the name of an Arabian horse used in the1979 film The Black Stallion. This black-coated horse had a white marking on its forehead, which was dyed black in the film.

One-syllable names are not given as much attention as they deserve. They’re easy to say and remember, and people most likely won’t ask you your pet’s name twice.

So, here are some good black horse names that we’re sure you’ll like, too.

This category focuses on dark horse names, that is to say, names that have a dark nature or are dark in color. Find your favorite from this list. 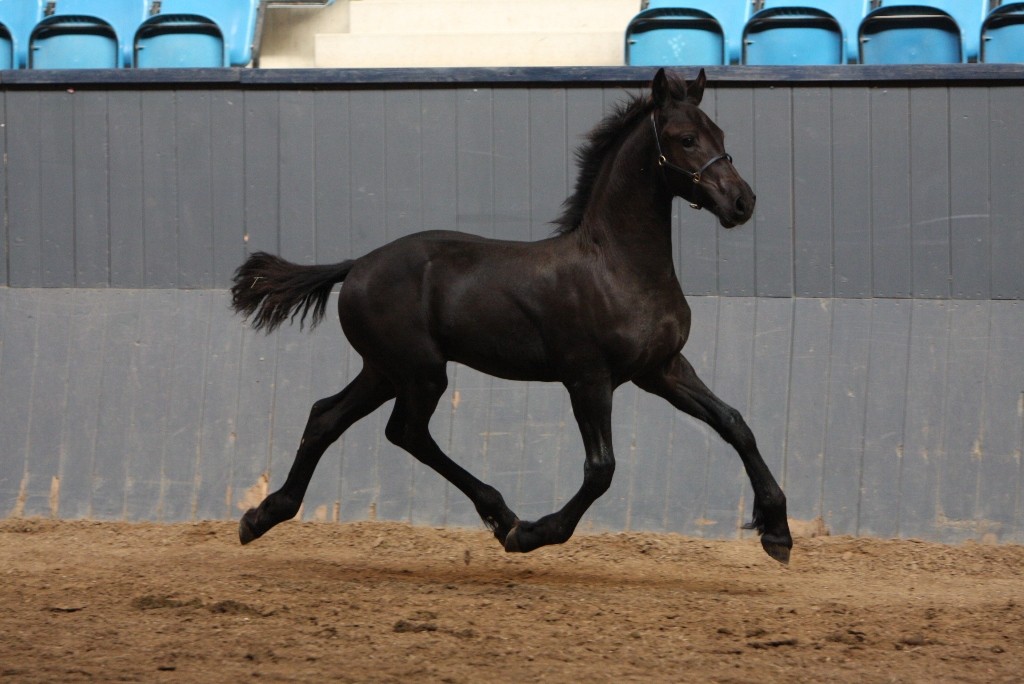 Black horses may not be immediately associated with cuteness as some other animals may be. However, if you’re an animal lover, you’re likely to find most animals cute (horses included), whether they’re big or small.

So for those of you who agree with that statement, here are some cute black horse names that you might like.

Drogon: Drogon is a character from the novel series A Song of Ice and Fire and the TV series Game of Thrones. Drogon is one of three dragons that belong to DanerysTargarian and is the primary dragon that she rides.

If Drogon is not cool enough for you, then check these cool black horse names out!

Do you like to make a joke out of nothing when the opportunity arises? Well, it’s your time to shine. We’ve got a few funny black horse names that’ll help you showcase your sense of humor among your friends.

While one could argue that most horses are elegant in the way they move and look, there are some that just stand out from the rest. If your elegant horse is a particularly unique creature, here’s a list of names for it.

Take a look at some black horse names that are based solely on the color of your equine companion.

Bucephalus: Bucephalus was Alexander the Great’s trusty steed. This stallion was described as having a full black coat with a white star on its head. The horse got its name because of a marking that depicted an ox’s head.

According to legend, Bucephalus wouldn’t let anyone but Alexander ride it. If your horse is picky like this one was, name it Bucephalus.

There have been many famous horses throughout history that have impressed horse lovers.

The following list of famous black horse names will help you pick a name that pays homage to some fantastic equine creatures.

Alastor: Alastor was a powerful black horse that belonged to the Greek god of the underworld, Hades. Alastor, along with 3 other horses, pulled a chariot for this Greek god.

Purebred Spanish horses belong to the Andalusian breed. These horses have a strong build, which will be clear when you first lay eyes on one. They also have thick manes and tails.

These strong and noble horses have a history of being used in wars because of these essential qualities.

If you have a black Andalusian and wish to give it a name based on its heritage, check out these names below.

Vader: Darth Vader or Lord Vader is one of the main characters from all of Star Wars lore.

He was a powerful Jedi who later becomes a Sith. Despite having prosthetic limbs, Vader is one of the strongest beings in the Galaxy. And the fact that he’s draped in black makes the name perfect for a strong black horse.

Vader could also work for an elegant name because Vader was an elegant swordsman (we mean lightsaber, of course) and pilot.

Horses are one of the most majestic animals out there, and only a few people would think otherwise. So, you should take a bit of time to come with a name that best suits your horse.

While this guide on choosing cool and funny black horse names aims to help you narrow things down, the decision is ultimately yours.

Some common things to focus on are your horse’s attributes and gender. However, if you want to try something a bit different, you could name them after some legendary horses from eons past.