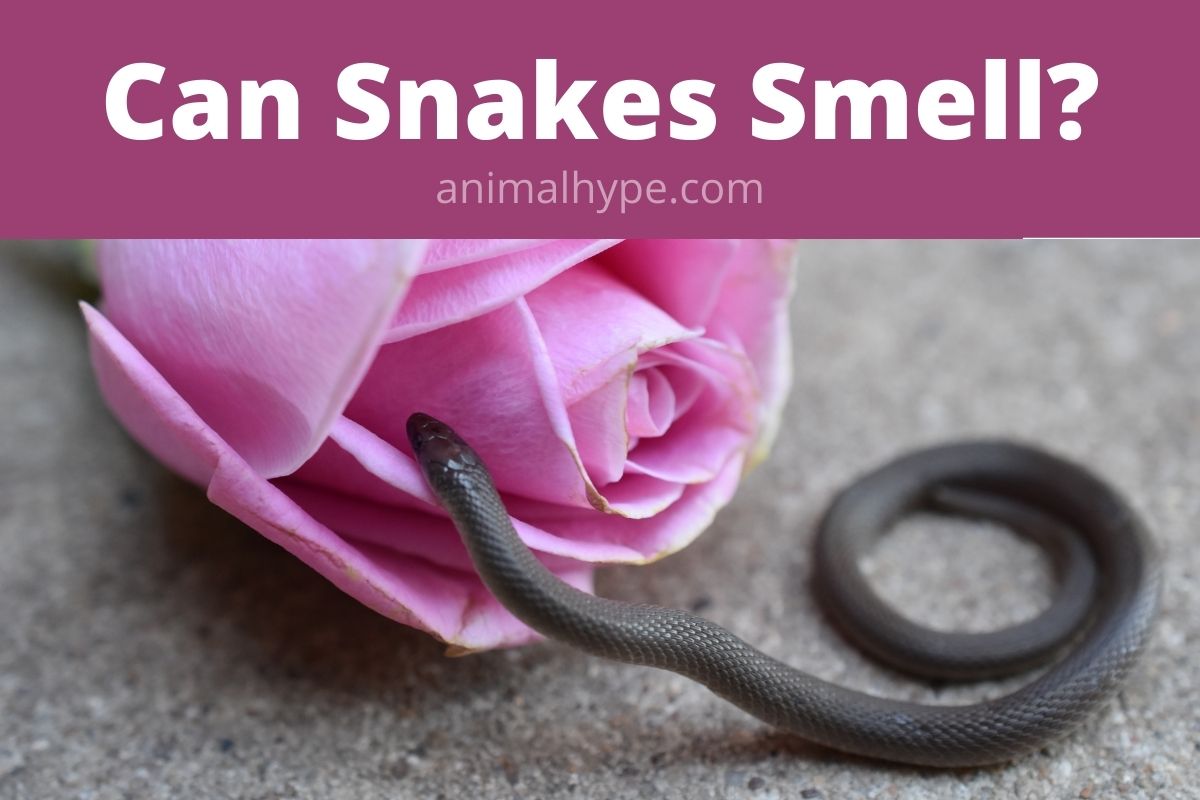 Can snakes smell? It is a common question asked amongst snake owners all over the world. A lot of the time, you will see people referencing hundreds of years old research and denying one of the five senses to snakes. However, the truth is a bit different.

Snakes may not have a refined sense of smell like dogs or humans, but they are not without some sort of smelling ability. Snakes have two distinct sensory organs called the vomeronasal or Jacobson’s organ and the forked tongue. These special sensory organs assist with sensing their surroundings.

In this article, we’ll be looking at the science behind snake smelling and talking about some fun facts about snake olfaction!

Snakes are an unusual species with their crawling, worm-like body, the absence of limbs, and several other unlikely characteristics. These reptiles are a mystery to many. Today, we’re here to talk about whether or not can they smell; and if they can, how?

So, can snakes smell? Yes, they can smell. However, they don’t use their noses to smell like most other animals. Instead, they have an organ present right beneath their nasal cavity, known as the Jacobson’s Organ. This organ, along with the cooperation of their tongue, helps them in perceiving smells.

In this article, we will discuss all aspects of snakes and the process in which they perceive smell: the function of their nose, tongue, and Jacobson’s Organ in the process of Chemoreception, the kinds of smell that can attract and repel them, and so on.

The Sense Organs of Snakes

For those of you who didn’t know this, snakes are one of those reptiles that are dependent solely on their sense of smell.

These slithering creatures cannot focus their eyes well, and also lack both an outer ear and eardrum. Moreover, their sense of touch is also very limited due to the presence of hard scales on their body.

Below, we will learn about how they smell, and about the organs involved in the process.

Do Snakes Have a Nose? Can Snakes Use it to Smell?

Most people believe that snakes have no nose at all, which might be because their nose is not as apparently visible as our own. However, these reptiles do have a nose, although they’re more aptly called “nostrils”.

These nostrils are two, round holes that are located right above their mouth, one on each side. Snakes also have nasal cavities. But can these assist them in smelling things?

Although snakes have both nostrils and nasal cavities, they can’t use them to smell. The only function of these organs in their body is breathing. So, how do these reptiles smell? We’ll learn more about it in the next section.

Chemoreception: What Is It?

Chemoreception is described as a process in which an organism responds to the chemical stimuli present in its environment that are dependent basically on smell and taste.

This process uses the combination of taste and smell, which is how snakes perceive smell in their surroundings. But if their nose plays no role in this process, what other organs are involved? Their tongue and the Jacobson’s Organ.

In the next sections, we will discuss these organs and their role in perceiving smells.

The Jacobson’s Organ: What Is It and How Does It Help Snakes in Perceiving Smell?

Also referred to as the “Vomeronasal Organ”, the Jacobson’s Organ is named after Ludwig Jacobson, a Danish surgeon who discovered it in 1813. This organ can be found in almost all reptiles and mammals, including humans. However, while these organs are not fully functional in humans or bats (some species), in snakes, they are.

The Jacobson’s Organ is located at the base of the snakes’ nasal cavity and has two ducts that open up on the roof of their mouth. Once the snake brings the smell particles in contact with these ducts, the organ sends a signal to their brain. After interpreting these signals, their brain is able to distinguish whether it is the smell of food or a threat lurking nearby.

Are you wondering how the scent particles find their way to these ducts? That’s where the snake’s tongue comes in. Let’s read more about it in the next section.

Snake’s Tongue and Its Function in Perceiving Smell

If you have ever seen a snake in your life (or even read about them), you’d know that their signature forked-tongue is the most remarkable feature in their body.

In order for snakes to smell, both their tongues and Jacobson’s Organs are equally important. While the latter receives scent particles through its ducts and sends signals to the brain, the job of the tongue is to deliver the scent particles to these ducts.

The forked tongue of the snakes acts as a single, long, and sticky appendage that picks up the scent particles from its surroundings when it is sent out of its mouth. When it returns inside, the snakes bring it in contact with the ducts of the Jacobson’s Organ, so that signals can be sent to their brain.

The split in the snakes’ tongues is not merely coincidental but serves a purpose; with the help of the fork, these reptiles can determine the direction of the smell, and prepare themselves accordingly.

Why Do Snakes Flick Their Tongue?

There are many people out there that consider a snake’s flicking tongue to be a sign that it’s about to sting. This, however, is far from the truth.

In reality, their tongue-flicking is very much like our sniffing: an attempt to detect a smell more clearly. Moreover, the snake’s venom lies in its two, needle-like teeth that are located in their lower mouth, not in their tongue; there’s no way they can attack or sting anyone using their tongue, even if they wanted to.

So, the next time you see a snake flicking its tongue, know that it is a usual motion and not a reason to raise an alarm.

How Far Can Snakes Smell?

It is difficult to give an accurate answer to this question because there are diverse factors involved in the process: environmental factors such as humidity, the concentration of scent particles, and so on.

However, it has been proved in several studies that chemoreception is quite strong in snakes. This means that these reptiles can pick up a smell from at least a distance of 4-5 meters away.

Since snakes have such a strong and evolved sense of smell, do you wonder if maybe they can smell your fear? This idea has made many people much more afraid of snakes than they ought to be. However, it is merely a myth, with no shred of reality attached to it. While snakes can smell a human if he/she is within their smelling range, there is no way these reptiles can tell if they’re afraid or not. In fact, the snakes have no idea of any emotions you are feeling.

What Smells Can Attract Snakes?

Before talking about the kinds of smells that can attract snakes, you must know something about them; like most other creatures, they have two basic needs: food and reproduction. And since these reptiles have a specific mating season, they don’t send off or receive these chemicals outside of it. The scent of prey, however, is what can attract them all year round.

What Smells Can Repel Snakes?

Now that we have learned what kind of smells can attract snakes, you will certainly take care not to have any such smell in your yard. But would that mean that snakes would never enter your yard? Not really. If you’re living in an area where snakes are common, you must take some extra cautionary measures to keep them away from your yard. But how would you do that? We’ll tell you.

While there isn’t enough data to back it up, most people have claimed that adding the following smells in their yards has been effective in repelling the snakes. You can try them, too:

Plants That Can Act as Natural Snake Repellents

While the smells discussed in the last section have been said to repel snakes, there is little-to-no scientific proof of it. Moreover, these chemicals are also harmful to the environment, to our own health, and that of our pets.

What if we told you that there was a safer way to repel snakes from your yard? The Jacobson’s Organ, which helps snakes to smell, is sensitive to strong smells since they interrupt its ability to distinguish prey smells.

Below, we will talk about different plants that, if planted in your garden, are more likely to keep snakes away than the chemicals we talked about above:

These plants not only have colorful and vibrant flowers but also have sturdy and aggressive roots that can reach into the snakes’ underground burrows and emit a strong odor that they find quite repulsive.

Often used as a spice in a variety of food items, lemongrass should definitely be a part of your garden. They are easy to maintain and keep mosquitoes and ticks away. Moreover, they also have a citrus-like smell that is far too strong for the snakes.

If the threat of lurking snakes is common for you, you must find a place to plant garlic in your yard. Not only do these have a strong smell, but they’re also known to confuse the snakes. So, snakes would certainly want to stay away from their plants.

Often referred to as “Devil Pepper” and “Serpentina”, the Snakeroots are native to Asia and have bitter foliage and roots. These plants are lethal to snakes because of the presence of reserpine in them; reserpine is a component that has been known to slow down the heart rate of snakes and make them dizzy. Although we’re not sure if it can kill the snakes, one thing is clear: snakes are quite frightened by these plants and avoid coming anywhere near them.

Although most people wouldn’t want mugwort in their garden due to the difficulty of managing them, if you’re worried about snakes, these can really help you out. Mugwort has significant insecticidal properties which is probably the reason why the snakes are repelled by them.

Can snakes smell? I get this question often being that I’m an avid reptile collector. Snakes have become increasingly popular as pets among the reptile community, but they also elicit fear in many people because of their close proximity to humans and their infamous reputation for harming people.

To wrap it up, we can say that snakes rely on their sense of smell heavily. While they don’t have a process of perceiving smell as conventional as ours, they do possess a much stronger sense of smell than we do. Their tongues and Jacobson’s Organ are the two most vital organs that carry out the process.