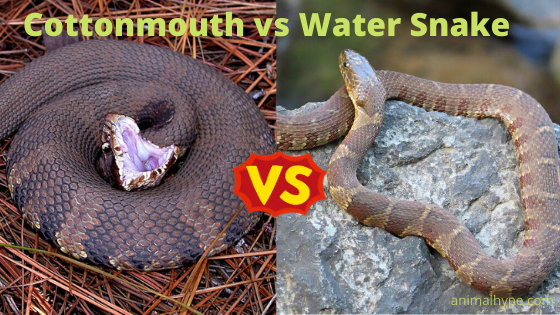 The easy way to distinguish cottonmouth, a venomous snake, from watersnake, which is non-venomous, is to notice their structural differences. The shape of their head and their iris, scale, and body structure are some of the characteristics that could be used to discern them if you happen to see any of them in your backyard. 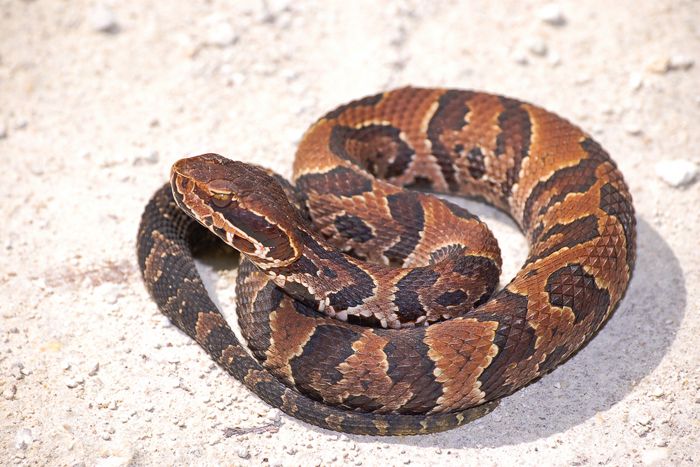 It is one of the venomous snakes full of toxic venom that is a pit viper subspecies. It is mostly found on the southern side of the United States.

It is one of those species of snakes that can be found near the water bodies or marshes, giving them the title of a semiaquatic viper.

This name is derived from Greek origin as well as Latin origin. Both these original names were put together in order to give cottonmouth the scientific name, which translates to “hook-toothed fish-eater.”

They have to be totally shallow, though, because they are not fully marine snakes that can swim in deep waters.

Cottonmouth is usually found in the southern United States, mainly in Carolina and places that are near them like Florida, Oklahoma, Georgia, Arkansas. Georgia is generally covered in the Ohio basin, which means it is a hotspot for cottonmouth snakes.

The common method that they use to hunt down their prey is by using the technique of body blows that are commonly seen in rattlesnakes.

They are more preyed upon. They are preyed upon by corner owls, turtles, Eagles, loggerhead shrikes, red shouldered hawks, big birds like egrets, herons, etc.

They are also preyed upon by their own species using the body blows methods because of their size.

Their genome contains cytotoxic, which means that their venoms have elements that hold enough power to destroy tissues. Even though death may not occur if a person is bitten, however, the person will be left with a scar by the snake bite, he may need an amputation to save himself from the toxic tissue.

Even though it is fatal, it doesn’t have a fatal systemic response or neurotic response to the body. It has been reported many times that other subspecies of cottonmouth snakes are more prone to attack than the cottonmouth.

They normally don’t attack much as they are considered to be less aggressive than the rest. Their bites are dealt with CroFab antivenom.

Their face looks like a pit. Their pits are sensitive to heat, which helps them find warm places. It works as an indicator. They are normally nocturnal, meaning they prefer to hunt at night. One of the unique factors of cottonmouth is that they can bite underwater too.

Females generally give birth to little snake babies from one to twenty in number. It is considered that one to eight is most common to the least.

Their size varies from 22 to 35 centimeters. However, the size could go up to 60 centimeters if the weather and the food condition is favorable as the female snake could reproduce less than three years of age.

Generally, they are given birth in August and September. When it comes to sexual activities, the male cottonmouths are more prone to establish a certain kind of dominance over the female so that they can recognize and establish a relationship.

Their threat response is pretty low. Only when they are threatened severely, they attack. Many times they tend to flee. Very few retreat to the threat display.

While shaking their tail, they throw their head back and open their mouth. The white lining of their mouth looks like cotton. Thus the name cottonmouth. 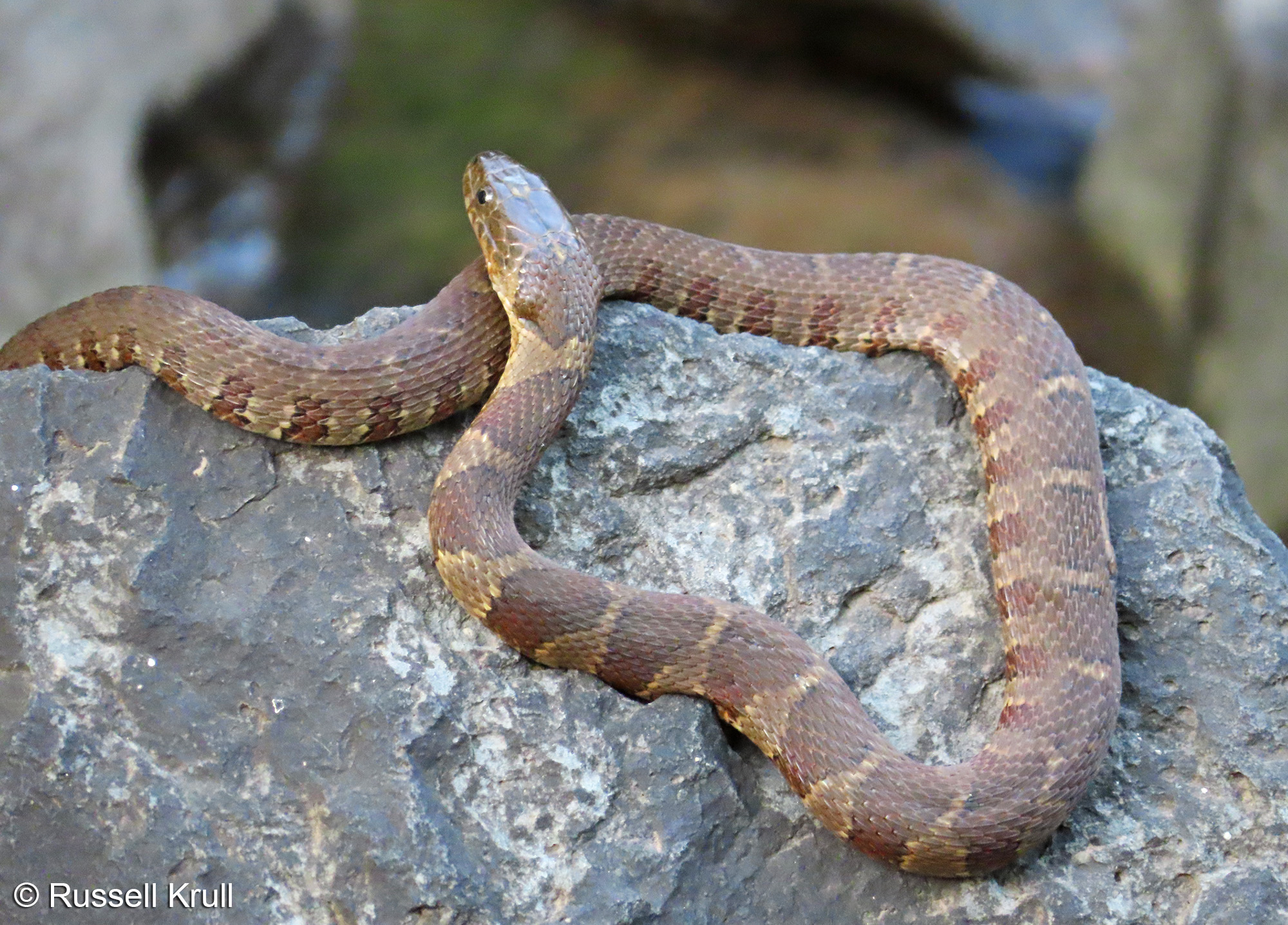 The water snakes are species that are large in size. They are non-venomous. They fall under the family of Colubridae. They are mainly found in the northern side of America. Their scientific name is Nerodia sipedon, and they generally mean water snakes.

These snakes are generally found in the northern side of America, mainly in Quebec and Ontario. In the southern side, they are found in Texas and Florida.

These types of snakes can be found in muskrat houses and beaver holes. They can cover themselves pretty well by hiding in the stacks of sticks and leaves.

They can be found in any type of water body such as lakes, ponds, streams, rivers, or canals. They are natural swimmers.

Water snakes hunt both at night and day. At night they are seen to be sitting on rocks and bushes to hunt their prey. In the daytime, they tend to hunt near marshes and water bodies.

They tend to hunt small fishes, frogs, tadpoles, and little birds and mammals. They use their senses in order to hunt.

They hunt using their bites. They don’t have any specific methods to attack. Some of their predators are foxes, turtles, humans, and big birds.

Water Snakes are not poisonous. They don’t have venom. All the species of water snakes are non-venomous.

Unlike many other snakes, the watersnakes don’t lay eggs. They tend to give birth like a mammal. They are the largest water snakes in any species.

These water snakes can grow up to 5 feet in length. They were considered to be endangered by the US habitats but later removed.

Water snakes tend to mate around April. They continue to mate till June. They don’t lay eggs, usually like other snakes.

Instead of laying eggs, the female snake tends to carry the egg inside their belly and give birth like a mammal. The babies are sized to be around 19 to 24 centimeters.

They can give birth to a maximum number of 30 babies, and 8 is the minimum number. The babies are given birth to around August and October.

Whenever the water snakes feel threatened, they tend to dive in the water to steer clear of any disturbance. It doesn’t usually attack unless the threat feels too extreme to them.

They tend to flee from such situations. However, when they are threatened extremely, they vigorously bite the opponents, meanwhile releasing excrement and musk.

While biting, they release a certain element known as an anticoagulant, which causes the bitten area to bleed more.

Cottonmouth: Their facial structure looks like a pit. Their head is of triangular shape. They have a white line above their jawline, which looks like cotton. They are normally dark brown, black, or olive in color. Their belly is paler than their backs. Their pupils are cat-like. They have heat sensors between their nostrils and eyes.

Watersnake: Their colors vary though they are brown, black, olive and reddish and grey. Their pupil is not cat-like but round. They have many patterns on their skins, which differentiates them from cottonmouth. When feeling threatened, they press their head. They don’t have heat-sensors on them.

It could be concluded that even though cottonmouth and water snakes are found harboring near water bodies, they have distinct structural appearance and habits that set them apart. If one notices the shape of the head, eyes, and iris, they will successfully discern which snake is venomous and which snake is not.