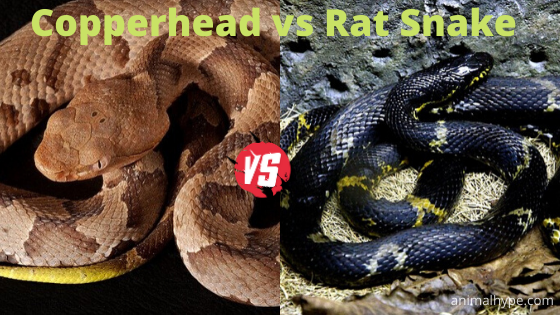 Snakes are perhaps one of the most intimidating and intriguing reptiles. They come in wide variants according to their skin color, and while some are poisonous, others are not. Many snakes have little to no difference when it comes to their texture and skin pattern, like the rat snake and the copperhead. So, how do we identify them if we come across one? 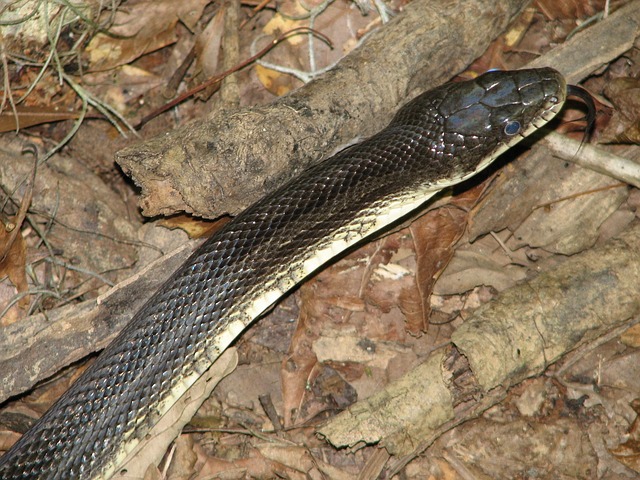 Rat snakes are inhabitants of Southern Maryland and are found in the dry forest region of New Jersey. They are known to develop into a size of eight feet in length. Also known as Common rat snakes, they are often found coiled around the backyard or the garden.

The common thriving place for these snakes is in swamps, marshes, thick bush, and fields’ woodlands. You would also find them in trees, woodhouses, and bird nests.

They take shelter in these places to hide from predators. They are also known for their climbing skills. They also live in high altitudes and sea level in suitable habitat.

If you have heard of boa constrictors, then the habit of hunting for the rat snakes won’t be that hard for you. They are also by nature constrictors, i.e., to say that they kill their prey by wrapping or constricting their large bodies around the victim to the point that they suffocate.

These non-aggressive, harmless snakes fall prey to foxes, snakes, raccoons, eagles, hawks, etc. Although they are non-poisonous, they are often considered a threat as they are quite large.

They are mistaken for the poisonous and dangerous rattlesnakes as they shake their tail in the same manner.

These are naturally non-aggressive snakes and do not bite at all, and in the few rare cases of bite, their bite is quite painful though far from fatal.

Furthermore, they have proven to be quite beneficial to agriculture as they consume the rats and pests responsible for paddy destruction.

These reptiles are incredibly efficient in maintaining the balance of the eco-system, which would otherwise be in the ruts with the rodent population.

They are agile and fast and stays away from human sight, most of the time. King Cobras often make the rat snakes their prey.

In the Indian subcontinent, they are quite prized for their skins. Rat snakes shed their skin, and those skins are believed to possess curative properties. However, the impact of poachers has left them dwindling in numbers as they are also hunted for their flesh, as some people think that it can cure rheumatic problems.

Rat snakes are not very fond of the hot and sweltering sun and, thus, often found in cool shades and holes in the home.

Some misconceptions are surrounding the lifestyle of Rat snakes. Let’s take a look at them.

Some snake charmers believe that they mate with cobras, which is far from the truth. They mate only and only within their own species, and any belief of inter-species mating is just rumors.

Rat snakes are oviparous. Females lay a cluster of 6-15 eggs per season. The incubation period of which is 60-80 days.

Expanding over a range of 55-60 species variants, these snakes are also called chicken snakes as they eat the eggs of the poultry birds. Their defense mechanism is quite unusual; they expel a toxic secretion when threatened from their excretory glands and stikes from an upreared position. 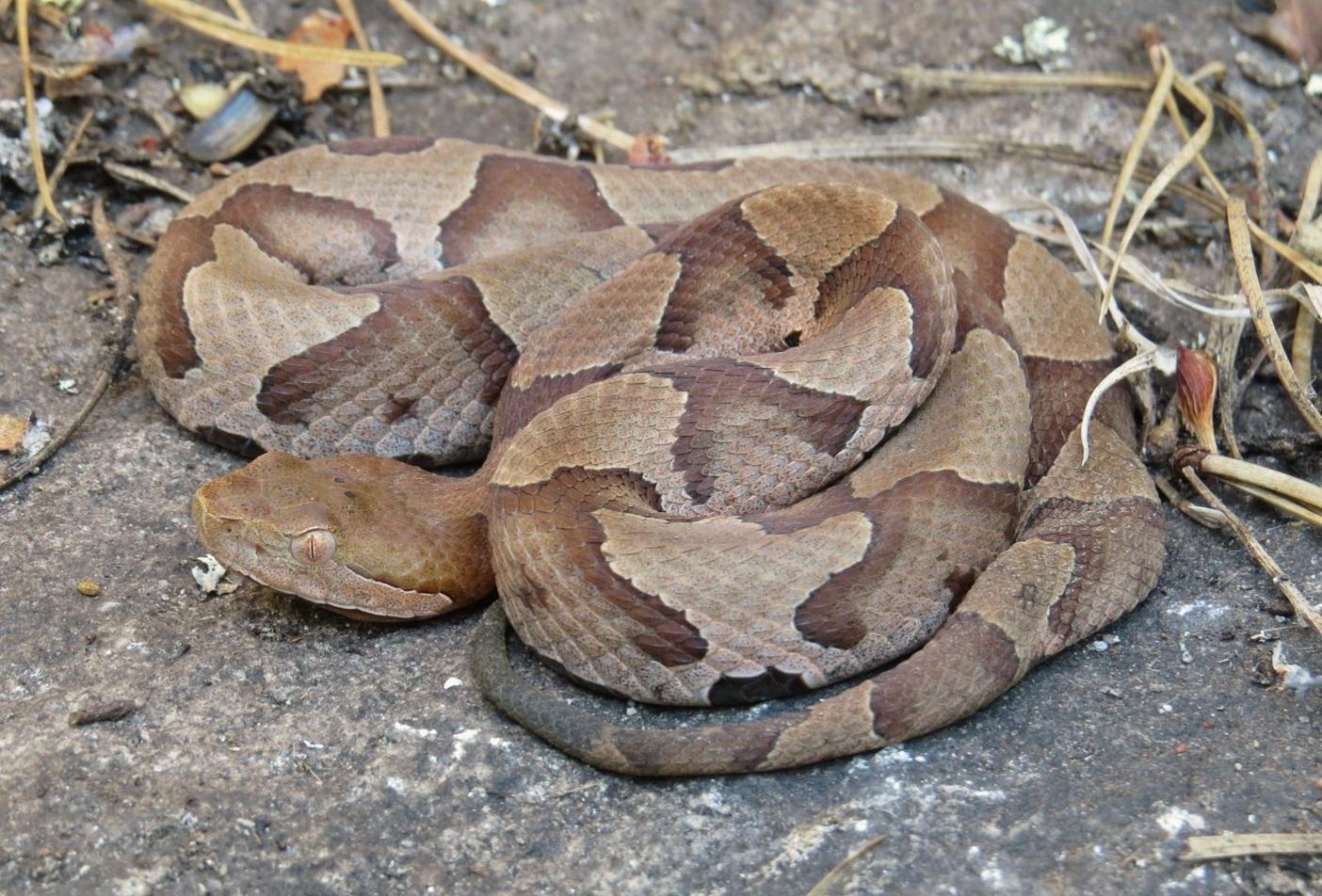 Natives to North America, Mexico, and Texas, copperheads are venomous snakes with intricate patterns. They lent their names from their redheads. Pit Vipers, Highland moccasins, etc. are the colloquial names for these snakes which reside in the woody and swampy regions.

With a relative size less than 1 meter or 3.28 ft, these snakes are characterized by heat sensory pits between the eyes.

Females are relatively longer than males though their male counterparts have lengthier tails. The bands on their backs are in the shape of the hourglass, saddlebags, or dumbbells. They are lighter in tone towards the center with darker margins.

With a large and vertical pupil, their eyes are one of the most striking features which sets them apart from rat snakes. Orange, reddish-brown or tan are the variants of their irises. Their heads are somewhat triangular and are not in tandem with the neck portion.

They can be found in the locality, and they hunt in the day, especially during the spring and the autumn season. However, in the summer, they hunt at night only. Swimming is one of its unique features. They hibernate in the winter.

Copperheads are popular ‘mobile ambush predators.’ Once they bite their prey, they release it and then wait for the poison to take effect. Once the venom takes over, they take over and consume the prey. Copperheads swallow their food whole without tearing it to pieces.

These vipers also have something to be afraid of as they are also hunted by cottonmouths, king snakes, hawks, owls, opossums, coyotes, etc. To avoid predation, they take shelter under forages and even abandoned houses and human-made structures.

Copperhead’s mating process is an exciting affair. They fight for their females, and sometimes even the female goes ahead and fights a prospective male suitor to test his capabilities. They are ovoviviparous.

This shows that the incubation of the eggs happens in the mother’s body. The babies are born directly after younglings are usually 8-10 inches in length, and their fangs are laced with venom.

Infamous for contributing to the most number of cases, in the U.S, these snakes have a poisonous bite though not fatal. Their reaction is without any delay, and they strike immediately, upon facing a threat.

In research of the American Museum of Natural History, it has been substantiated that it can prevent cancerous tumors’ growth.

Difference between a CopperHead Snake Neonate and a Rat snake Neonate

Copperhead Neonates – Bearing the same pattern to their adult counterparts, these younglings are usually yellow and green in color.
Rat Neonates – They are patterned in uniform and elliptical shapes running along their entire length.

Copperhead Neonates – Tails of vivid colors are used to attract the prey. Their tails as bait shake to attract small frogs or rodents.
Rat Neonates – Tail are pointed, unlike that of Rattlesnakes. Moreover, their tales are patterned.

Copperhead Neonates – They mature from their bright colors into sandstone or red color within a span of a year.
Rat Neonates – They develop into fully black individuals by the end of the adolescent.

Copperhead Neonates – It has fangs that are poisonous.
Rat Neonates – It does not have fangs, be it in their young or adult form.

Copperhead – Distinctive with their large, triangular head, these snakes have defined eyes.
Rat snakes – Small head like that of the turtle.

Copperhead – Cap of scales present on their head.
Rat Snakes – There is no cap of scales.

Copperhead – The bite marks are like one or two holes on the skin.
Rat Snakes – Their bites appear to be as small scratches.

Copperhead – They have hourglass-shaped patterns on their body.
Rat Snakes – With shiny black scales, they have a white underskin.

Since Copperheads are known for their immaculate sense of smell, they can predict threats and humans from a mile away. Additionally, the pits are also helpful in estimating the heat source and its directions.

They remain motionless, which makes it harder for a human to detect them, and this results in the worrisome statistics, which shows that these snakes are the significant reason behind bite victims.

At least one-third of the bitten victims needed immediate medical attention, with 10% being quite critical, though not ultimately fatal. Symptoms of their bites are pain, hemorrhage, fever, fatigue, and some skin issues like edema. Children and older people with co-morbidities should be kept away from the snakes, as it can lead to death.

Rat snakes are garden snakes. Some people pick them up with their gloved hands even! So we can see the level of poison is less to none.