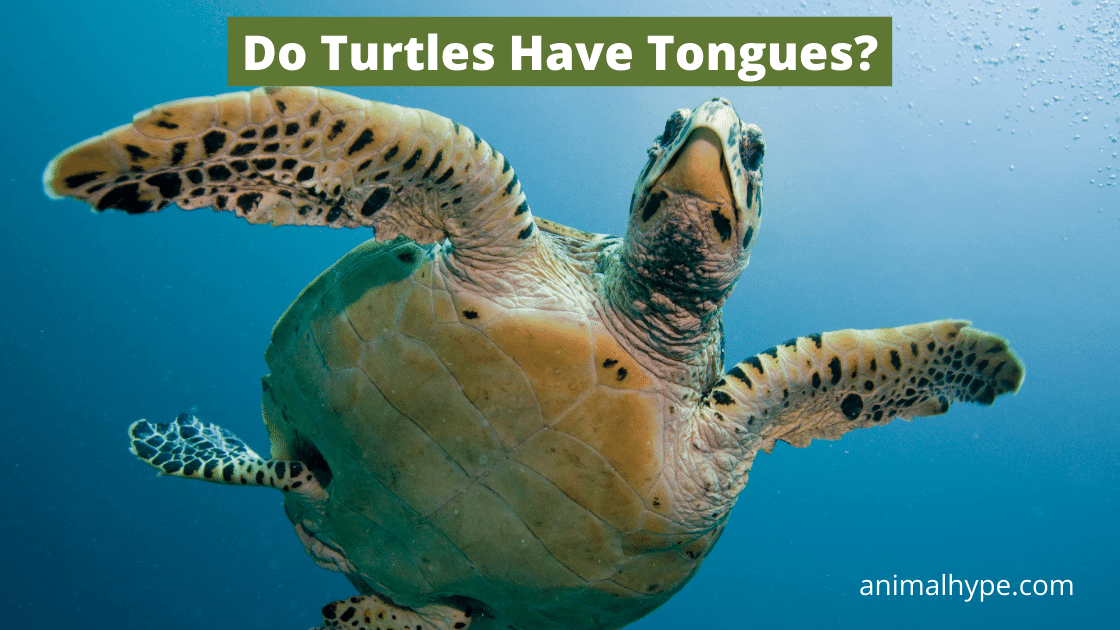 Turtles are ancient, shelled creatures that are widely distributed throughout the world and live in diverse habitats. There are over 360 turtle species on Earth that have been recognized and registered by us. These reptiles are kept as pets in many households as well. They have a calm personality, do not demand a lot of your attention, and are easy to care for. However, most pet-owners have many questions about pet turtles, their anatomy, and their behavior. Turtles are, after all, different from the other reptiles in many ways.

Do turtles have tongues? Yes, Turtles do have tongues. However, it is difficult to spot it because they cannot stick it out of their mouths. The tongues of turtles are virtually fixed inside their skull and have two common usages: respiration and eating. Moreover, certain turtle species’ tongues are designed a little differently to fulfill different purposes.

Both the terrestrial and aquatic turtles have tongues. But since their functions can differ, it is essential for the pet owners to have thorough knowledge about the different species and their characteristics.

This article will talk about turtles and their tongues: what they are used for and how they help them. We’ll also take a look inside the mouth of turtles and read some interesting facts about them.

The main uses of tongues for Turtles 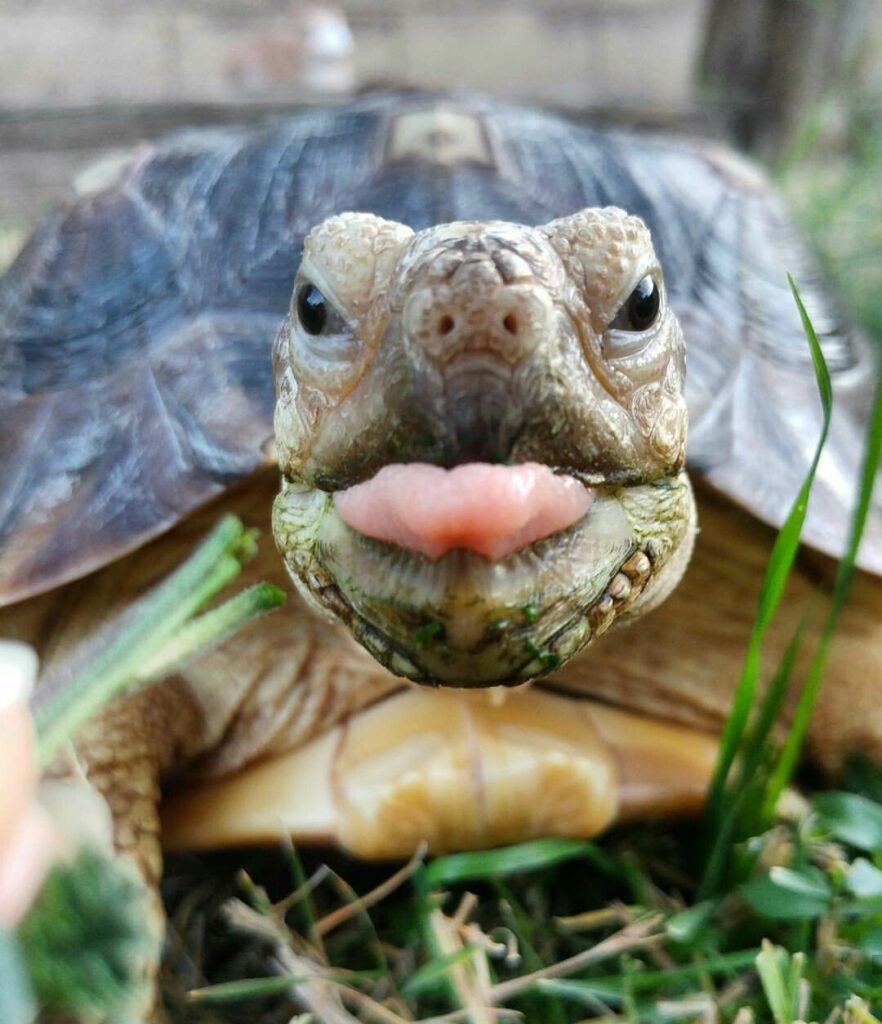 Apart from the turtles, the reptiles of the crocodilian family can also not stick their tongues out. There are three different functions of a tongue in different turtle species. Let’s learn more about each one:

There are many carnivorous species of turtles out there that mainly feed on clams, crayfish, and other crustaceans. However, have you ever wondered how do they pull it off without having any teeth?

Yes, you read that right. The pre-historic turtle species were indeed believed to possess teeth, but the ones that we find nowadays are toothless. This is where their tongue comes in. Since they cannot chew their food due to the lack of teeth, most turtles are dependent on the muscles of their tongues for swallowing their food.

The carnivore turtle species, including most aquatic turtle species, need their tongues even more since they use it to press their prey to the roof of their mouth to immobilize them.

The Musk Turtles (Sternotherus odoratus), also known as “Stinkpot turtles”, are a carnivorous species of turtles that primarily inhabit slow-moving, shallow water bodies. These turtles use their tongues for breathing underwater. Are you wondering how? We’ll tell you.

How do the turtles normally breathe underwater? Using the cloacal bursae, a cavity located on their rear end in which they can store oxygen. The cloacal bursae allow turtles to stay in water for about 6-7 hours on average, although other factors influence this time duration as well.

The Musk Turtles do not have the cloacal bursae and, thus, breathe inside the water using their tongues. The tiny tongues of these turtles are lined with small, specialized cells that appear more like buds. These cells are called “papillae”.

The papillae have the ability to draw oxygen from the water that passes over these cells. This is how the Musk Turtles can stay submerged in water for months. Apart from Musk Turtles, a few other turtle species practice this as well.

Apart from swallowing food and breathing, the tongues of certain turtle species play another interesting role: of luring prey into their mouths.

This process is known as “Lingual luring”, a form of aggressive mimicry in which a predator uses a harmless-looking part of its body to lure in its prey. Among the turtles, the Alligator Snapping Turtles are the perfect example of it.

These turtles have a wriggly part attached to the base of their tongue, which resembles a worm. They keep their mouths open underwater, waiting to catch the attention of fish.

Once a fish notices it, they think of it as a worm and are drawn to it. As soon as they enter the turtle’s mouth unknowingly, their mouth snaps shut, capturing the fish inside.

What’s inside a turtle’s mouth?

Now we know that all turtle species possess tongues, even though different species use them differently. Do you what else is inside the mouth of a turtle?

We’ve already discussed how turtles are toothless. So how do these reptiles eat their food? We can roughly divide turtles into two categories: the carnivorous ones and those more inclined to eat plant matters.

The mouth of the carnivorous turtles is very much like that of the birds, with a sharp set of beaks that they use to catch their prey. These beaks are often used for pecking and biting. If you observe a carnivore turtle eating, you will notice how closely it resembles a bird feeding on worms.

On the other hand, the turtles that are primarily herbivores have a pair of flat, broad beaks that help them in crushing down and mashing plants.

Other than beaks, some turtle species also have knife-like ridges as well as bones in their mouth to help them tear and grind their food. The Snapping Turtles have powerful jaws that are strong enough to bite through bones. The Alligator Snapping Turtles are particularly more lethal than the others and are, thus, seldom kept as pets.

When turtles are born, they possess what is called “egg tooth”. All reptiles are born with these projections in their mouth to break through the shell of their eggs in the initial stage of their life. However, once the eggshell is broken, the turtles have no use of these teeth. Therefore, after a couple of weeks, the teeth wither away on their own.

Interesting facts about Turtles and their tongues

1. Although the role of their mouth is uncertain in the process, many turtle species tend to start their lives as staunch carnivores but eventually become omnivores, mostly preferring plants over meat.

2. Turtles use their tongues for smelling. How? Most of the reptiles and amphibians have a unique organ in their body, known as the “Jacobson’s organ”.

3. Although turtles have been placed in the family of reptiles, they are more closely related to birds than lizards or snakes.

4. The Snapping Turtles were not always capable of snapping. However, since their body isn’t small enough to fit inside their shell like the other turtles, they have evolved and can now use their snapping as a defense.

How many turtles can I place inside a single tank?

Although young or adolescent turtles do well in each other’s company, it is better to put them into different tanks when they grow into adults. This is more important if you have two adult males that tend to get territorial. If you can’t have two tanks at home, get a bigger tank with several hiding places.

Can turtles bring diseases into my home?

All animals can potentially carry some of the other kind of germ or disease in their body. Turtles are no exception to it. They are known to carry salmonella. However, since there is no way to tell if a turtle has salmonella, it is advised to wash your hands thoroughly after handling them.

If you have children at home, it is essential for you to keep an eye on them when they play with the turtles. Make sure they don’t try to put them into their mouths and teach them to wash their hands properly afterward as well.

What should be the ideal temperature for my turtle’s tank?

Ideally, the temperature inside a turtle’s tank should range between 80 to 88 degrees Fahrenheit. If it is too cold inside the tank, the turtles are more likely to go into hibernation. However, an unchecked rise in the temperature is even more dangerous since it possibly even kill them.

Do Turtles have tongues? (bottom line)

While turtles do have tongues, the bottom line is theirs are the weirdest in the entire reptile family. They are attached to the turtle’s skull and have limited movement. Moreover, some turtles use their tongues to swallow food, while others can breathe underwater through them. The turtles’ mouth cavity is more complex than you could have thought and, thus, quite intriguing.