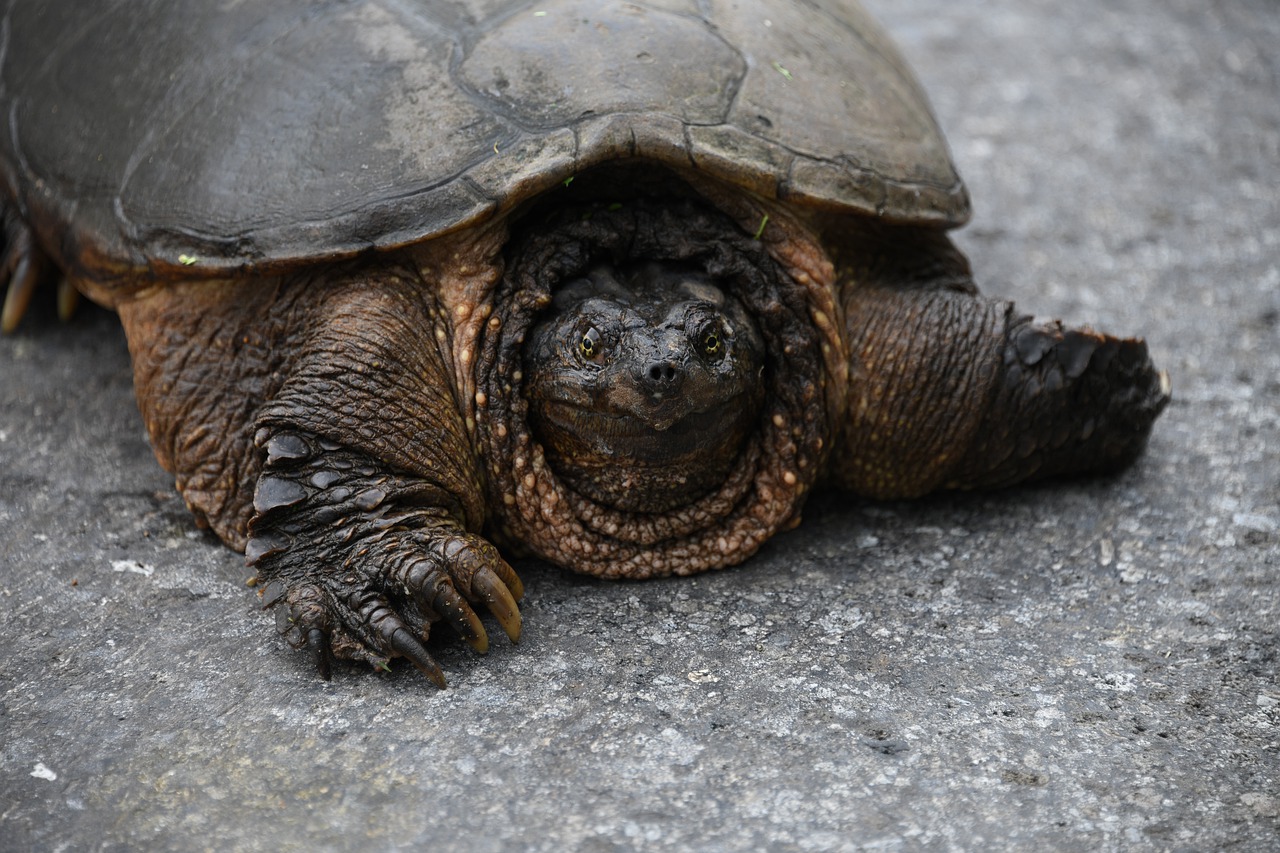 Snapping turtle is one of the docile looking creatures to which you wouldn’t dare to feed with your hand. Well, snapping turtles are widely known for their deadly bites with very high force. If you are curious enough to find out what these bites can do or how strong these bites are, keep on reading this article till the end.

The hardest bite recorded ever was of common toad-headed turtle’s bite that measured 435 Newtons.  If you want to estimate the force of the snapping turtle’s bite, let me tell you that an average human can bite with a force of 160 to 180 newtons.

The difference is made by the snapping turtle’s sharp beak which creates a very high pressure (nearly 1000 PSI) far more than a human produces. It is very near to the Royal Bengal Tiger’s bite pressure which is around 1050 PSI.

Now, you can imagine why is it dangerous to put your finger in its mouth. It can very easily chop off your finger from your hand as soon as it closes its mouth.

There are a total of 5 subspecies of snapping turtles that are spread over America. Well, all of these turtles are pretty large in size and are found in wild regions of central and southern America. These 5 subspecies are further divided into 2 major categories: Chelydra and Macrochelys.

While both categories possess many different physical properties, they both are known as snapping turtles due to their similar biting behavior.

So, let’s discuss the biting ability of these 2 famous snapping turtles:

Alligator turtles due to strong jaws can produce a high bite force of nearly 160 to 170 newtons. These can easily break wooden broomsticks in half with their bites.

Alligator snapping turtles have really long claws, a very strong shell that most of the alligators can’t even break and a very sharp beak which produces very high pressure.

The beak is used to pierce into the flesh of its prey and kill it.

Some people say that they have a bite force equal to that of an alligator but it is not true. They don’t have a very high bit force but they can convert that force into a very high pressure using their beak. That is how they can pierce even the hard things.

In comparison with alligator snapping turtles, common snapping turtles or Chelydra serpentina are much smaller in size measuring 1.4 ft long and weigh 16 Kgs. Even though these turtles are smaller, this doesn’t mean they are any less than them when it comes to biting.

Can Snapping Turtle Bite Your Finger Off?

Well, the study says that snapping turtles have strong jaws and should be handled with extreme care. Well, there have been only a couple of cases where people lost their toe finger. But it does not mean that they can’t if given the chance.

Snapping turtles can produce 1000 PSI of pressure force with the help of sharp beak and strong jaws which is more than enough to bite off the finger. So, never try to be a daredevil by bringing your hand near snapping turtle’s mouth.

Even if someone manages to take its hand out of snapping turtles mouth the wound caused by turtles beak is more prone to catch a serious infection.

There was such an incident that happened in Mexico, where the man got bit by an alligator snapping turtle on his finger. Even though he did manage to take his finger out of the turtle’s mouth it was bleeding heavily and caught a serious infection. It finally resulted in the traumatic amputation of his finger.