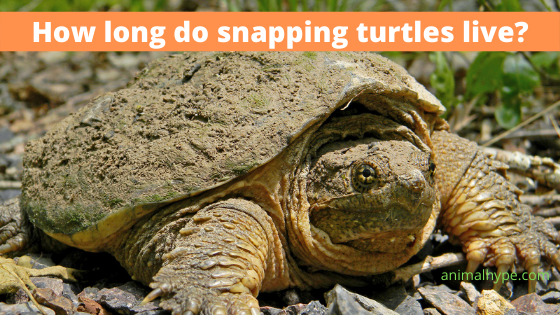 Do you wish to keep a snapping turtle as a pet? Want to know how long they’ll live to be your permanent company? Age is something that many people consider before they choose their pets. So, what about snapping turtle lifespan?

So, how long do snapping turtles live? A snapping turtle’s estimated lifespan is around 30-45 years in the wild, whereas it can be extended up to 100 years with care in captivity. Being a vulnerable creature as a hatchling, they often get eaten by predators or hit by cars. Overall, we can say that a healthy snapping turtle will live up to 47 years.

Most animal lovers suffer emotionally when their adorable pets die. But snapping turtles might save you from that pain as they are likely to outlive you. A rather disturbing fact about pets is that while kept in the restricted surrounding, most of them die in the first two years.

As a result, pet owners started to believe that all animals tend to have a shorter lifespan. However, turtles are an exception to this belief.

As long as you keep showering your pets with love and care, not only they’ll live longer, but their life will be a good one. Talking about longer life, the Snapping turtle belongs to Chelydridae’s family, whose maximum age is over 100 years. Don’t believe us?

Fine, let’s explore everything about snapping turtles and find out what makes them incredible creatures and an ideal companion for humans.

How long snapping turtles live in their natural habitat? 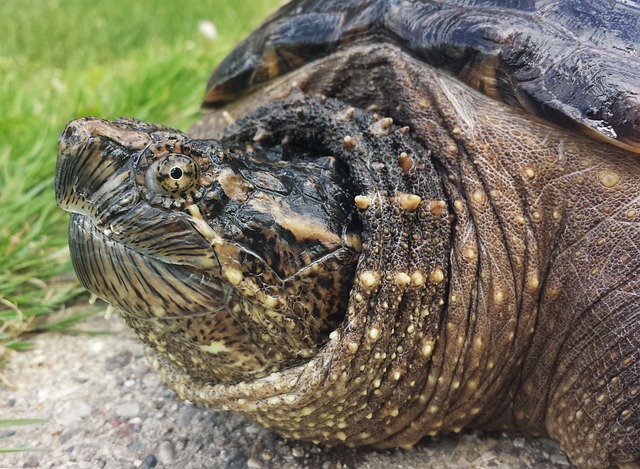 The general prediction of a snapping turtle lifespan in the wild is an intricate task. Wild jungles can be a cruel place, especially for the young snappers.

The primary risk to their lives is when they are just an egg, subject to crows, American mink, foxes, raccoons, skunks, etc. At a younger age, they get attacked by predators like herons, owls, hawks, bitterns, American bullfrogs, snakes, and large fishes.

Accounting all these factors, we can say that there are fewer chances of survival for the snapping turtles in the wild. If they manage to survive through the first 10-12 years of their lives, they can ideally live up to 40-50 years due to their formidable defense.

For how many years snapping turtles can live in captivity? 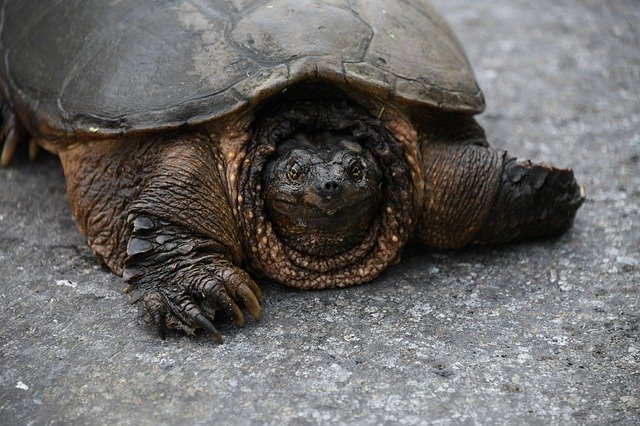 When kept as a pet or under human care, the chances of snapping turtle survival increase significantly. Keeping one as a pet will save the creature’s life, and they’ll live comfortably without any fear.

Such turtles that get a healthy lifestyle and reach adulthood tend to live longer and die mostly of old age. In theory, it is said that many snapping turtles can live for more than 100 years.

Unless you know when the egg hatched, you can only take an educated guess of its age and care for it accordingly. Given adequate care, food, shelter, and protection from predatory animals, the snapping turtle will live more than 50 years in your home.

In case you wish to keep alligator snapping turtles as your pet, their lifespan is much longer than common snappers, i.e., approximately 70-80 years in captivity.

What are the common diseases snapping turtles suffer from?

Captivity sounds good for snapping turtles as people misunderstand them as low-maintenance pets. But the truth is that they need strict basic sanitation and dietary requirements. Apart from that, many diseases can also develop in turtles during captivity such as:

All these ailments can make the turtle sick so much that you’ll have to seek veterinary care.

How to increase snapping turtle’s lifespan?

A pet owner always wants to give the best to their pets. Once you find out how long snapping turtles live, you might feel happy about their long age. However, it’s only possible when you raise them right.

Looking over the diseases that snapping turtles can suffer from, we need to discuss the possible line of action to keep them safe.

Here are a few substantial steps to take care of your snapper and increase its lifespan.

Owning a snapping turtle is not a decision that you can make hastily. They grow larger, live a long life, and pose a serious hazard to the keepers.

Due to the anti-social behavior of snapping turtles, most people don’t see them as ideal pets. They prefer being left alone than to try and bite humans. But that won’t stop the turtle from doing so if provoked.

Hence, you need to be an ideal candidate to buy a snapping turtle as a pet and must have the resources to care for their species. The common snapping turtle is often kept as a pet while the other, alligator snapping turtles, are not preferred due to their extensive growth rate.

Getting a snapping turtle is possible from the wild areas in some states. Still, the outright approach brings better results. Try to acquire specimens that are captive bred; otherwise, there are more chances that these freshwater creatures won’t adapt to the human-made environment in captivity.

You can scour the internet to find turtle breeders near you and unbox your companion to introduce him to his new home.

Like any other pet, snapping turtles also need a suitable habitat with the appropriate temperature to live. Regardless of which species you decide to get, a spacious tank is an essential requirement for them.

The preferable habitat is, of course, an outdoor pond with a fence or concrete fall to prevent them from wandering off.

Create a pond in a location where partial sunlight is accessible and remember that turtles are messier than fishes. Use filters that feature biological, chemical, and mechanical stages to keep the water clean.  Plus, note that the snapping turtles have an aggressive and territorial personality.

As a result, they develop intolerance towards other species, which means you should keep them in a standalone environment rather than keeping them in mixed-species ponds.

Both species primarily rely on the diet of living fishes and aquatic critters. While the alligator snapper is a carnivore, the common snappers enjoy aquatic vegetation in their diet.

For the former, you’ll have to keep fresh livestock in the pond. For the latter, you can offer them leafy green vegetables once a week combined with fruits like grapes and strawberries.

You can also include frozen rodents, chicks, or ducks in their diet from time to time. The healthier they eat, the longer they live.

Last but not least valuable step is interaction. Snapping turtles are the kind of pets that would prefer if you don’t touch them. Observing them from a distance is safe. Getting closer will create stress, and handling will put you at risk. Handling the hatchlings is easier but pay attention to juveniles and adults.

How can I identify a snapping turtle?

Chelydra Serpentina or snapping turtle is a freshwater turtle that usually lives in ponds and lakes. They are commonly found in southeastern Canada, Far East regions like Florida and Nova Scotia, and southwest of the Rocky Mountains.

These species have a ridged carapace with a rugged and muscular build, i.e., upper shell whose length can increase up to 20 inches. Their powerful beak-like jaws and the highly mobile serpent-like head and neck give a combative disposition.

For a novice, it won’t be easy to recognize a common snapping turtle from its alligator counter species. However, with an understanding of the creatures’ detailed anatomy, it’ll be easier to distinguish among them.

One noticeable feature of snapping turtles is that they have noticeable long tails with spiky ridge compared to other species. Their enormous heads with the hooked upper beaks are also easy to tell apart.

The last feature is their overall body color; the shell appears black, brown, olive, and shades of tan. Plus, the skin color can be black, brown, grey, tan, olive, yellow, or a combination of these colors.

You can also look at their eyes that usually have a black pattern of spots that somehow resembles a cross. Look closely, and with all these features, you will be able to identify snapping turtles among the family of Chelydridae.

We suggest that you contact a professional keeper to learn how to handle snapping turtles. You can always gather some additional information on how to prolong the lifespan of your pet. We hope that this information here will allow you to provide the best for these incredible creatures residing with you.

An alligator snapping turtle named Thunder lived around 150 years in captivity. Even though the average lifespan is unlikely to go beyond 100 years, you can hope for the best.

Is the Snapping Turtle’s attack Fatal? A snapping turtle won’t attack until and unless they are provoked. Furthermore, their attacks are not fatal, but it can lend a fatal blow on the provoker.

How can I know a Snapping Turtle’s age? A snapping turtle’s age can be identified by measuring the carapace length from the front towards the back. After this, you can compare the measured length with the average snapping turtle to find the age. However, counting the turtle’s annuli rings won’t give you its age. It is a misconception.

26 Types Of Turtles In Florida