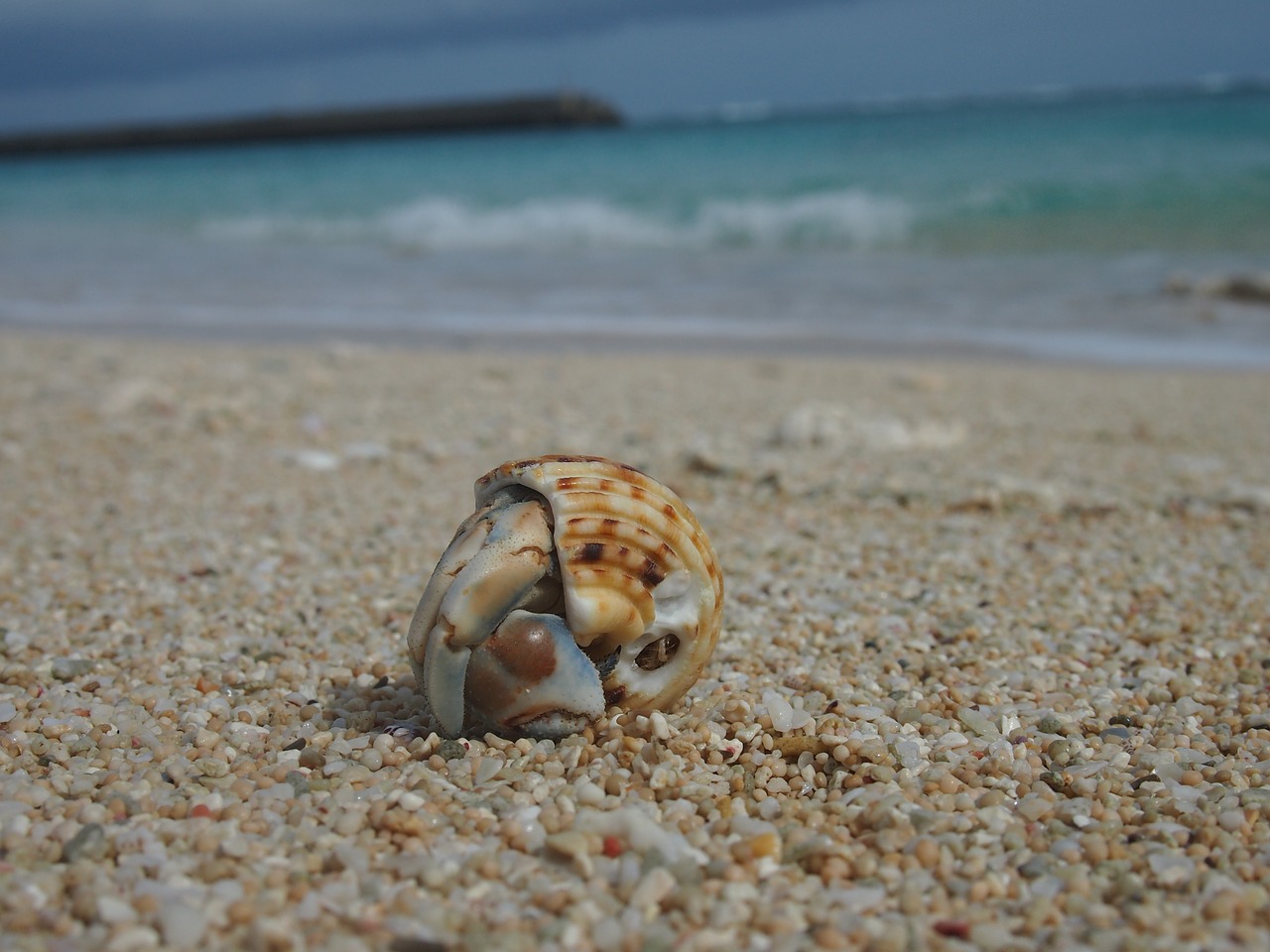 Hermit crabs are known to be active and curious by nature and it is so much fun to observe them. Among the many questions asked about a hermit crab, the most common one is whether they sleep or not. And if they do, when and where do they sleep?

Yes, hermit crabs sleep similar to all other organisms. Hermit crabs are nocturnal life forms that sleep throughout the day and become active only at night. Unlike other organisms, a change in temperature or humidity in its immediate environment can alter the sleep cycle of a hermit crab.

In this article, we will discuss in detail the sleep cycle of a hermit crab in the wild and in captivity and most importantly the things one should know about their sleep cycle as a hermit pet owner.

When do hermit crabs sleep? 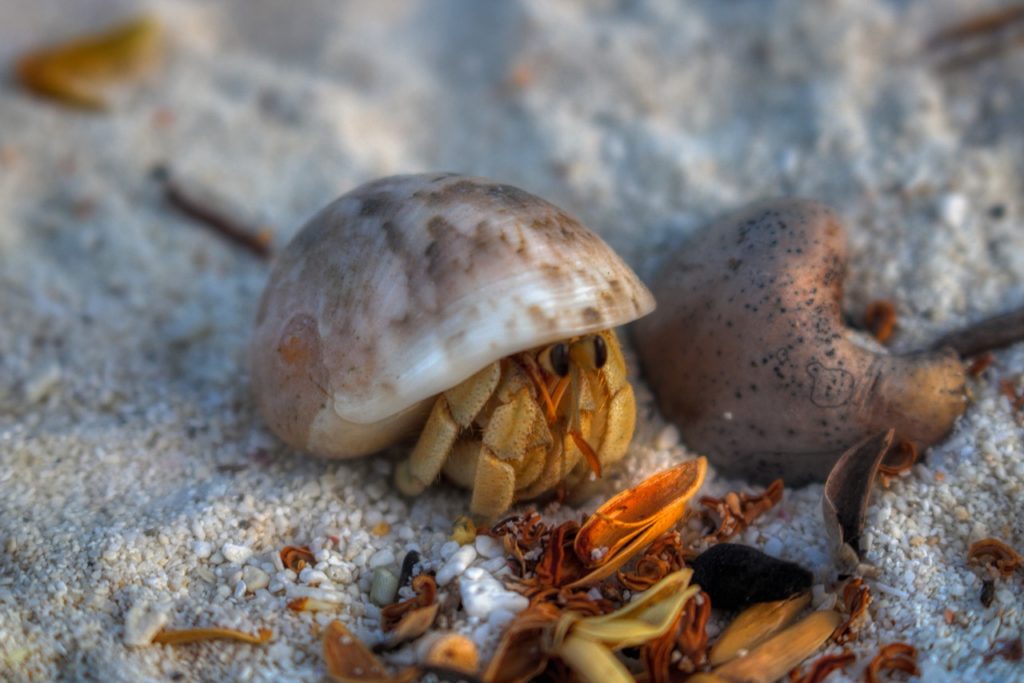 As mentioned earlier, hermit crabs are nocturnal species that sleep during the day and become active at night. Hermits stay awake in the morning only when they are fed something they really like.

When we say nocturnal it doesn’t mean that the hermit sleeps throughout the day rather it means they are less active during the day.

In their natural habitat, the greatest enemy of a hermit is dehydration and the most feasible way to reduce the chances of dehydration is to stay indoors during the day and come out only at night. Which explains the reason for their nocturnal behavior.

How long do Hermit crabs sleep?

It is not possible to exactly determine how long do they sleep. Hermit crabs go inside their shells and hide when they sleep.

Not always do they sleep when they are inside the shell, sometimes they might simply go inside and sit around. The best guess would be that the hermits might be sleeping for 6 to 8 hours a day.

How do hermit crabs sleep?

Be it inside an aquarium or its natural habitat, hermit craps rest and sleep inside shells. Hermit crabs do not have a hard exoskeleton like other crabs and are vulnerable to attack from predators.

When they sleep or rest they tuck themselves inside a shell for protection. The hermit crabs have 2 pairs of sensory antennae which they use to know their surroundings and taste their food.

When the crabs sleep, they keep their antennae which are used to touch and feel pointed towards the opening of the shell. These antennae help the crabs sense any predators approaching.

Do hermit crabs sleep outside their shell?

So when the humidity inside the shell is more than 70% they may come out and bury themselves and sleep under the sand.

Do hermit crabs sleep with their eyes open? 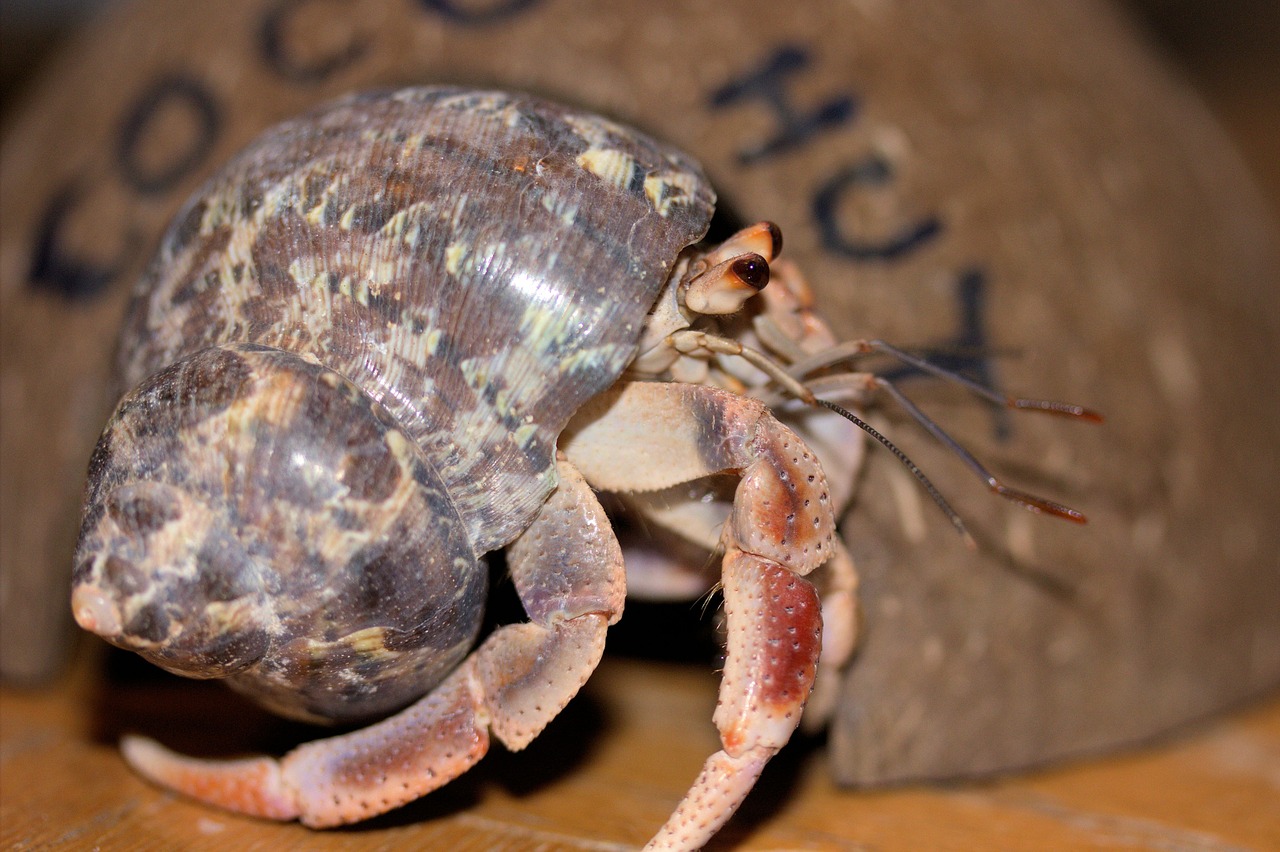 How do I know if my hermit is sleeping or dead?

Hermits can sometimes have serious mood swings and they might resort to staying tucked inside their shell. Some pet owners have claimed that their hermits have stayed inside the shell for 2 full days. So how do you know if your hermit is safe inside the shell? Putting your finger into the shell is never an option, instead, you can try the following method.

In case, if you have kept your hermit in a dry crabitat, the method mentioned above might not be effective. Because if the crab is dead, it might get dry and sticks to the wall of the shell. Instead, what you can do is to let the hermit dangle for a few more seconds. If it is alive, you should see them react by coming out of their shell.

Does the temperature and humidity inside the crabitat affect a hermit crab’s sleep?

Yeah, the temperature and humidity inside the crabitat can influence the sleep cycle of a pet hermit. The optimum temperature for the hermit to be active is between 65 to 75 Fahrenheit and the humidity has to be more than 70%.

In the absence of any one of the above, your hermit can become lethargic, less active, and sleep more. For your hermit to stay healthy, it is imperative that he gets only an adequate amount of sleep.

Is it normal for the hermit crabs to pile on top of each other while sleeping?

How to wake up a sleeping hermit crab?

Hermit crabs are nocturnal and they are inactive during the day time. Only when the night falls they come out of their shells and become active. So what if one fine morning you feel like spending some time with your hermit? You can’t simply go knock on your crab’s shell and sticking your finger into the shell is never an option.

Place them on your palm

This is one of the most effective ways to wake up a hermit crab from its sleep. As mentioned in the earlier sections, hermit crabs sleep by pointing its 2 sensory antennae towards the opening of the shell. When you place them on your palm, they are going to sense the change in their immediate environment.

Adjust the temperature inside their crabitat

As mentioned earlier, hermit crabs are the most active when the temperature is between 65 to 75 Fahrenheit. Increasing the temperature inside their crabitat can make them active and wake him up from his sleep. They are not going to be grumpy this time!

Place other active hermit crabs near the sleeping ones

Hermit crabs are social creatures and are found to be living in colonies in their natural habitat. When you place an active hermit crab near the sleeping one, it is going to wake up the sleeping crabs.

Spray dechlorinated water into the shell

Though this method is the most effective among all, it is not preferred by many. Spraying water suddenly into the shell can shock the hermit crab and make them grumpy. Sometimes they may even wake up and not come out of the shell because of fear.
If you were to use this method ever, do not spray more than 2 or 3 squirts.

Give them a bath

Yeah, you heard me right. Flip your hermit crab and dunk them in dechlorinated water. The room temperature of the water is going to wake him up without giving him a shock.

Why isn’t my Hermit crab sleeping?

As discussed in the earlier sections, hermit crabs are nocturnal and they sleep during the day. In fact, hermit crabs need only a couple of hours of sleep and not long hours.

The reason why most hermits choose to remain inside the shell and rest during the day is to escape from the heat. So you don’t have to worry about your hermit crab not sleeping and being active most of the time.

You only have to worry if your hermit is sleeping most of the time because this can be a symptom of deteriorating health. In such cases, calling the vet is going to be the best option. You can also try to adjust the temperature and humidity inside the crabitat.