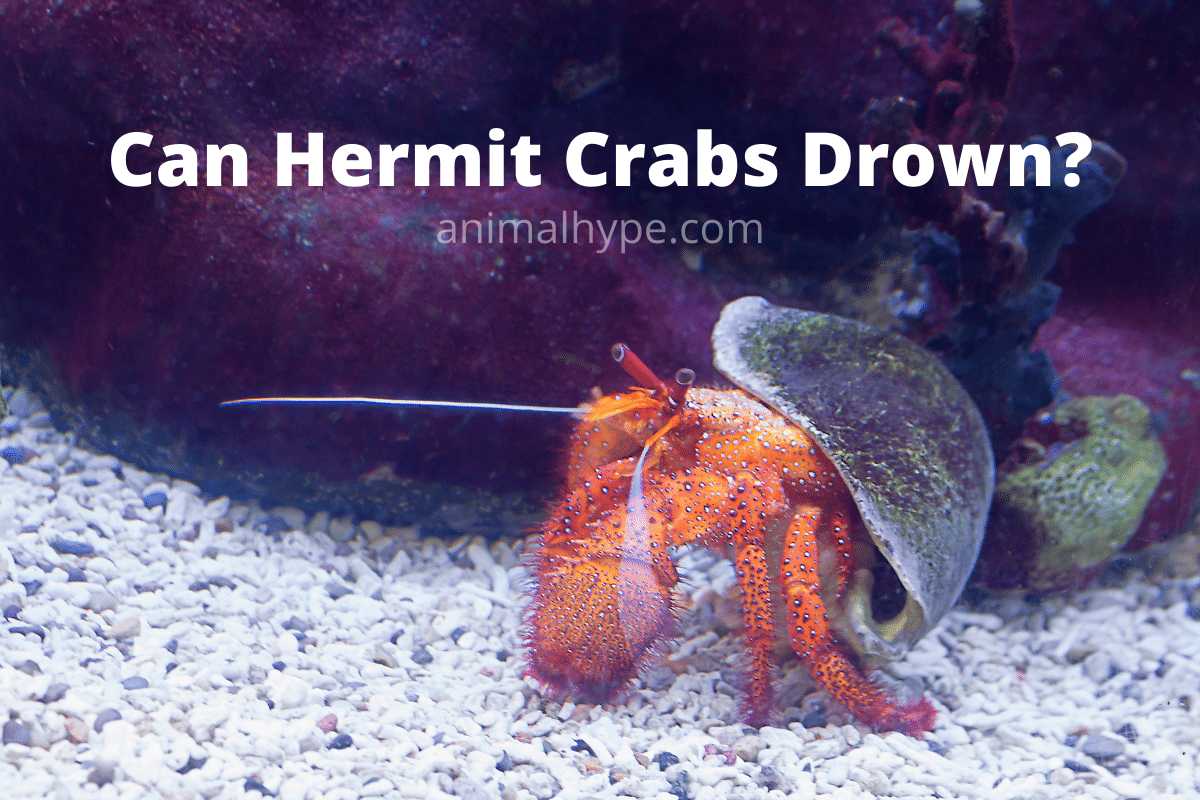 When you hear the term “aquatic pets,” which aquatic creatures come to your mind? Fish, turtles, maybe even frog. Don’t you forget something? Yes, Hermit Crabs are the aquatic pets you don’t want to miss out on. Active, curious, and entertaining, these easy-to-maintain and colorful pets will bring new life into your tank as well as your home. However, there are several differences between the Hermit Crabs and aquatic pets you must know about before bringing one home.

Can Hermit Crabs drown? Yes, unlike all the other aquatic pets you might have known or heard of, the gills of Hermit Crabs are not designed to breathe underwater. Thus, if you leave your pet Hermit Crabs in water for a longer period, they are very likely to drown. Although the lasting duration might vary for individual Hermit Crabs, they can last in water for no longer than 15-25 minutes on average.

Does this mean that these crabs cannot swim? And if not, do they still need water as much as the other crab species? If these questions have been haunting you, you needn’t fret anymore. In this article, we will tell you everything you need to know about exposing your pet Hermit Crabs to water.

How Well Do You Know Your Pet Hermit Crabs?

Before we move on to talk about whether or not can Hermit Crabs drown, let us first find out how well you know your pet Hermit Crabs.

Did you know that there are over 800 species of Hermit Crabs in the world? While it is logically impossible to know about each one of them, they are divided into two broad categories that you should know about.

Let’s find out more about these in the next section. 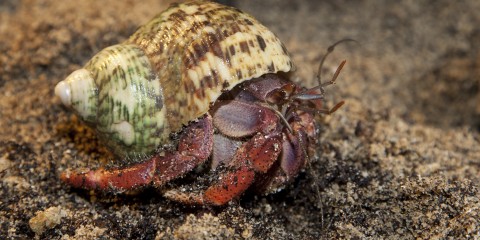 Land Hermit Crabs are the group of terrestrial Hermit Crab species that live on the ground but need access to both freshwater and saltwater to survive. On the other hand, the Marine Hermit Crabs are aquatic crabs that spend their life underwater and can only survive on land as long as their gills have moisture.

Among the two, the Land Hermit Crabs are more commonly kept as pets. However, it doesn’t mean that the Marine Hermit Crabs do not make good pets. These Hermit Crabs are just more high-maintenance than the former and are best raised by pet owners who have more experience raising exotic aquatic pets.

You can distinguish between a Land and a Marine Hermit Crab from their appearance. The body of the Land Hermit Crabs is solidly colored, often in shades of red or purple. On the other hand, Aquatic Hermit Crabs have a multi-colored body with striped or speckled legs. Because they live in water, the shells of the Marine Hermit Crabs are covered in barnacles.

Land Hermit Crabs make their home in muddy or sandy areas and live in high sand-hills in the forests. On the other hand, the Marine Hermit Crabs live in shallow coral reefs where they can find planktons in abundance. Some of them tend to live as deep as 450 meters in the ocean.

Other than these differences, the Land and Marine Hermit Crabs are somewhat similar. Both of them are nocturnal in nature and are highly social, preferring to live in large groups.

Most people don’t know this, but not all crabs can swim. Most of these aquatic creatures simply walk or run on the bed of the ocean. The same is true for the Hermit Crabs. They do not know how to swim; neither are their bodies designed for the activity. This makes them more prone to drowning if left in water unattended for too long.

While it is true that Hermit Crabs cannot swim and will probably drown if left in water, these little creatures still need water to obtain moisture.

But why do Hermit Crabs need moisture?

The Land Hermit Crabs, although they cannot remain submerged in water, need to keep their gills moist to survive. This is why it is recommended to maintain a humid environment inside their tanks at all times.

I spray the tank of my pet crabs with a mist bottle every day to keep it about 75-80% damp. Most people also add swimming pools in their tank, but we will talk about it in the next section.

If you don’t provide your pet Hermit Crabs with proper humidity, they might die of suffocation.

Hermit Crabs indeed need access to both saltwater and freshwater inside their tank to stay healthy. Most pet-owners believe that these crabs use freshwater for their drinking purposes and bathe in the saltwater.

This, however, is not true.

Most of the Hermit Crabs species can and will drink both freshwater and saltwater. They are also known for storing water inside their shells to keep their gills and abdomen hydrated and functional.

For this purpose, they often mix freshwater with saltwater.

Do Hermit Crabs Need A Pool?

Most crab-owners believe that adding swimming in the tank of their pet Hermit Crabs is too much of a hassle, especially with the added risk of them drowning. However, I personally believe that although adding pools might mean walking the extra mile for you, it is essential for the good health of your pet.

There are three important functions of the pools inside your pet Hermit Crab’s tank: the first one is to maintain humidity inside the tank. We’ve already discussed how humidity is of utmost importance for the survival of your pets. So, it is okay if you had a busy day at work and couldn’t remember to spray mist in your pet’s tank today; the pools will take care of that for you.

The second function of the pool is to allow your pet to wash their shells. For Hermit Crabs, washing their shell is important to maintain hygiene since they pee and poop inside their shell. They are compelled by their instinct to do so in their shells to fear being eaten if they go out.

The third function of swimming pools is simply giving them an abundance of water to drink from should they need it.

Now that we’ve established how necessary pools are for your little pets let’s talk about how we can make their pool a safe place for them by alleviating the risk of drowning.

How To Ensure That Your Hermit Crabs Do Not Drown In The Pool?

There are two ways by which you can ensure that your pets do not drown in the pool you’re adding in their tanks.

The first one is to provide them with an easy exit from the pool. For this, you can add a pool ramp in their pool. Plastic canvas works as the perfect material for pool ramps. It is cheap, easy to set up, and does not rust.

Another trick is not to install pools that are not deep enough for them to drown in. If your pet Hermit Crabs are medium-sized, go with a pool not deeper than 5 inches. That way, your pets can submerge themselves in the water fully without finding it difficult to get out when they need to.

Can I use tap water for my pet Hermit Crabs?

No. You should never use tap water for your Hermit Crabs before treating it first. Untreated tap water contains chlorine, chloramines, heavy metals, and fluorines, all of which can prove to be lethal for your little pets’ health.

How often should I change the water inside the tank of my pet Hermit Crabs?

Most Hermit Crab-owners tend to change the water of their pet’s tank on alternate days. But in my opinion, you should change it once every day. However, if you can’t make time for it daily, you can also consider setting up a filter in their tank.

Do Hermit Crabs need to be bathed regularly?

No. Hermit Crabs are good at bathing themselves, so you don’t have to worry about bathing them every day. However, if you have brought a new pet crab home, you should give a long bath in warm salt water to rid them of any harmful germs or bacteria that they might carry. Warm salt water baths once a month can be good for them as well.

In a nutshell, we have found that the body of Hermit Crabs is not designed for swimming in the water. Therefore, if they are left in water without any supervision, they might drown really quickly.

The time each Hermit Crab takes in drowning depends on the size of their body. That’s why you should never leave your pet crab inside the water at any cost. Even when you bathe them, make sure you are using a bowl that is not too deep for them to drown in.