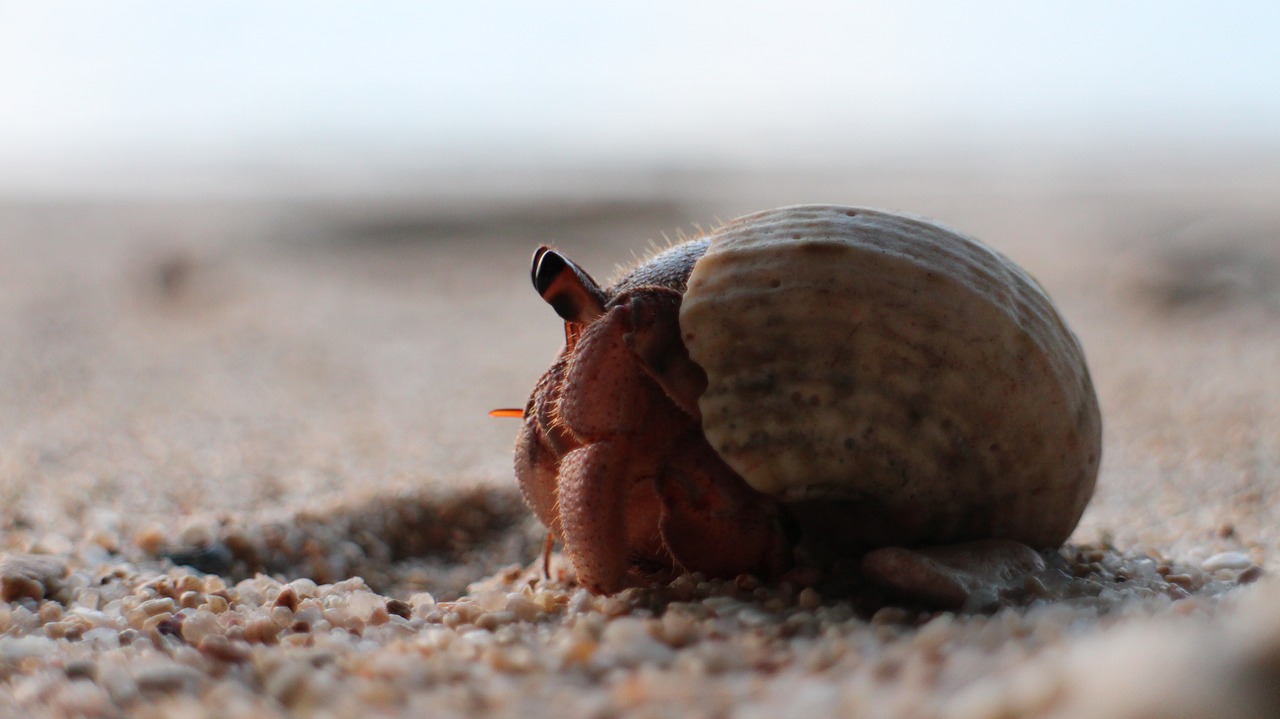 Molting is a stressful procedure by which a Hermit crab grows. Hermit crab’s body consists of no bones; it has only body tissues which are guarded by the exoskeleton. The exoskeleton of a Hermit crab does not grow; hence the only way for growth for this species is through the process of molting. 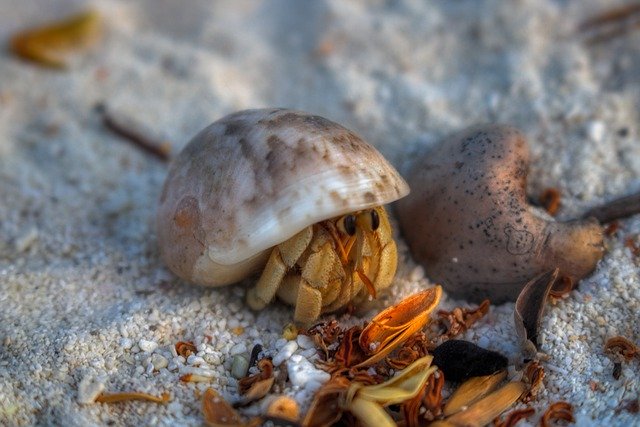 This is the stage where the older exoskeleton on the crab’s body starts to detach from the skin, and the new one begins forming below the older one.

At this very time, the Hermit crab starts to show signs of its molting. Let us know what those signs are.

So to say it in general, they all act in their own certain ways. Therefore, at the time of molting, this behavior tends to change drastically. These are some of the clues that tell us that molting is on its way.

When a Hermit crab is getting ready for molting, it sticks to a two-pronged strategy. The first one is to store up lots of water and food. The second one is to go underground or under the shell to molt.

If you notice a crab-eating and drinking water like never before, then this is your hint that the crab is starting to molt.

This abundance of storage is not solely for survival purposes. It is also required by the crab to swell up and break open its old exoskeleton.

The extra fat and water are stored in a ‘gray-black’ bubble, which is present on the left side of the Hermit crab’s stomach, hidden under its fifth pair of legs.

It is also observed that not all molting Hermit crabs develop these bubbles. So to be sure of the crab’s molting, you need to pay attention to other signs as well.

After their binge session, the crabs can stop eating completely and become very lethargic.

Hermit crabs have the nature of burying themselves deep inside the substrate at the time of molting.

It is a vulnerable and critical time for a crab when it’s in the molting process, and this is why they need a place where they cannot be disturbed by other species or predators.

Burying themselves provides them the extended darkness that is required for the molting hormone to secrete. If crabs do not find a substrate deep and moist enough, then they molt on the surface itself.

Surface molting is dangerous as there is a possibility that other crabs will scavenge the freshly molted crab that is vulnerable and immotile until it gains back its muscle strength and develops a new exoskeleton.

3. Changing the shells on their body

It is noticed that there comes a time when the Hermit crab begins to feel uncomfortable in its shell that it has been carrying around/ wearing.

The changing of shells more than often is not normal behavior. At the time of molting, crabs prefer a smaller shell because it helps them bury themselves much more easily.

Hermit crabs activity reduces to almost nil at the start of molting. Sometimes it is noticed that they drag their large claws under themselves as if it is very heavy.

In case the Hermit crab does not have a limb, the process of regeneration of that limb will begin. Initially, it might look like a gel limb or small nub, but as the time of molting comes nearer, the limb that is regenerating swells and becomes more defined.

1. Colour of the exoskeleton changes

On getting closer to the phase of molting, the exoskeleton starts to look a little faded and dull.

A Hermit crab originally has shiny black eyes when molting approaches the eyes of the crab to turn brownish/ cloudy.

Other signs of an impending molt can be; confused-looking and tangled antennae, less activity of the antennae, ashy exoskeleton, and dull-looking eyes.

How long does it take a Hermit crab to molt?

The time that is taken by a Hermit crab to complete its molting process varies. The general rule is, the bigger the crab, the longer will be the whole process.

An average-sized crab takes around four to six weeks to fully undergo the molting procedure. During these weeks, the crab stays wholly buried under the sand without any movement.

The process of shedding of the old skeleton takes less time compared to the stages that precede and follow shedding.

It has been observed that a bigger crab rests for a couple of days before is begins eating its old exoskeleton. As the larger crabs molt very less frequently, it isn’t unusual for them to be highly stressed during molting.

As mentioned above, the molting process comprises of precisely four stages. These four stages govern the Hermit crab’s growth.

This is the first stage where the new exoskeleton starts depositing beneath the older one. Regeneration of the lost limbs also begins at this stage as limb buds.

At this time, the crab is busy storing salts and food that will help in the process of shedding and isolation.

This is the second stage where the active shedding of the exoskeleton happens. This is the shortest stage out of the four.

In this phase, the salt and water previously stored by the crab are used by the hemolymph (it’s similar to blood in humans)of the crab to create hydrostatic pressure in the body.

These pressure cracks open the old exoskeleton, and the crab withdraws from it.

It is the third stage where the freshly molted crab starts to harden up and recovers its mobility. At this phase, the crab consumes its old exoskeleton as that exoskeleton gives it the necessary salts and minerals, which also helps in the calcification process.

This is the fourth and the longest stage during which the new exoskeleton stores and consumes calcium and minerals.

You can say that it is the period of rest that lies between the end of one molting process and the beginning of the next one.

With the crabs growth, this last stage also increases in duration. Hence, we can say that a younger Hermit crab will molt more often as compared to a larger one.

The Molting process is an essential part of the Hermit crab’s life. They spend most part of their lives, almost 80% to 90% preparing to molt, molting, and recovering from the whole process of molting.

Why does Hermit crab die after molting? 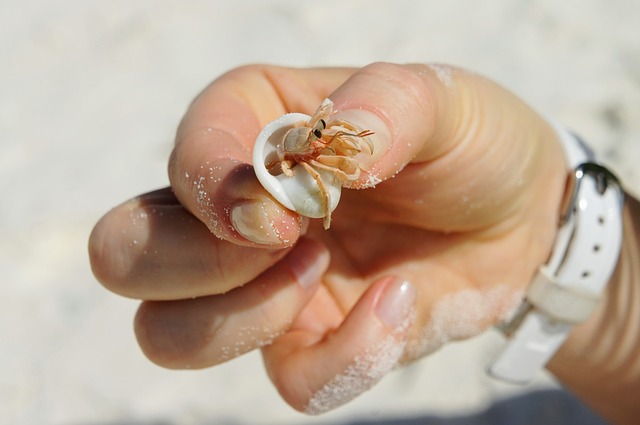 It is advised to not remove the exoskeleton from beside the crab as the Hermit crab eats it up to regain its lost calcium during molting.

If a crab is dead, its body will droop out of its shell. Observing carefully is required in such cases as this is also common in molting crabs. If it’s the exoskeleton of the crab, the eyes would be hollow and translucent and not dark.

How often do Hermit crabs molt?

Hermit crabs, in general, are known to molt every 18 months. The crabs smaller in size can molt more frequently, but this isn’t the case all the time.

All crabs show different signs at different times. Leave them alone, and they will molt whenever its time.

Hermit crabs molt by only two ways, and these are:-

This type of molting is stress-free and safe for the Hermit crab. When the molting time approaches, the crab buries itself entirely in the substrate as they need darkness, depth, heat, and moisture to molt successfully.

They carry out this on their own, and trying to help them might result in their death. Hermit crabs can handle molting on their own, but when in captivity, they need to be kept in tanks that have at least 3 inches of sand below it.

This helps the crab to bury itself comfortably at the time of molting.

This type of molting is carried out when the Hermit crab is sick or stressed. This is an unsafe way of molting, and the chances of survival become lesser for the crab.

When burying themselves is not possible (substrate not deep enough or unsuitable), or the crab feels sick, then they carry out the process of molting on the surface. This type of molting is carried out when the Hermit crab is sick or stressed.

This is an unsafe way of molting, and the chances of survival become lesser for the crab. When burying themselves is not possible (substrate not deep enough or unsuitable), or the crab feels sick, then they carry out the process of molting on the surface.

Do Hermit crabs move while molting? 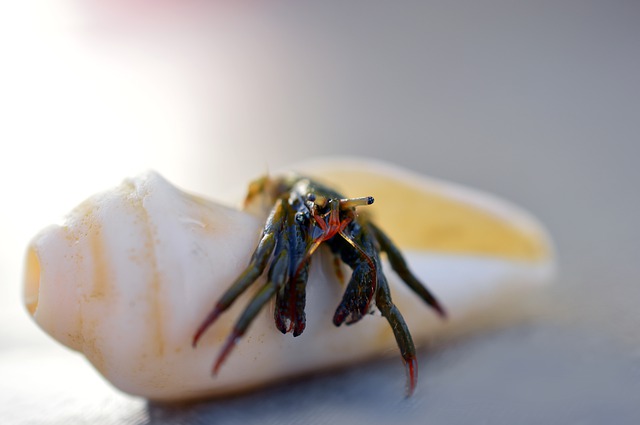 Movement at the time of molting is not possible for the Hermit crab as it loses its muscle strength. Once the molting process is complete and the crab consumes its exoskeleton, it regains its muscle control.

The proper movement of the crab begins only when the new exoskeleton has hardened up.

Do Hermit crabs leave their shells when molting?

Yes, Hermit crabs do leave their shells and change into a smaller one at the time of molting. It is quite surprising when we say; the crab changes its own shell with a smaller one as molting will only make the crab bigger, then why a smaller shell?

A crab that is all set to molt is well aware that a bigger shell will get bogged down with sand when the crab buries itself inside the substrate.

To avoid this situation, the crab sets out in search of a shell (right before it wants to bury itself) that fits it tightly.

This shell becomes comfortable as the newly molted crab is smaller than what it was before shedding its older exoskeleton.

After a month of coming up on the surface, the new exoskeleton starts to bulk up; and this is when the crab again sets out to seek a larger shell.

Do Hermit crabs change color when they molt?

Yes, Hermit crabs do show some changes in their color at the time molting. The original color of the crab might seem a little less vivid compared to before.

There is a sort of grey and ashy tone to the body, which mainly can be observed around the leg joints and the end of the legs.

What happens if you disturb a molting Hermit crab?

If a Molting crab is disturbed during the process, then it can turn fatal for the little chap. There is quite a possibility that the crab might fall apart as at the time of molting; they are extremely soft and vulnerable.

Worst case on being disturbed, they die. In case they don’t, then they might end up without certain limbs like a feeder claw for a complete cycle until it is regenerated.

How do you know your Hermit crab is alive during molting?

At the time of molting, the Hermit crab appears to be all limp, floppy and lifeless. On looking closely, one can observe small twitches from the crab’s body that tell that it’s still alive. Other than that, it becomes awfully difficult to tell whether the crab is alive or not.