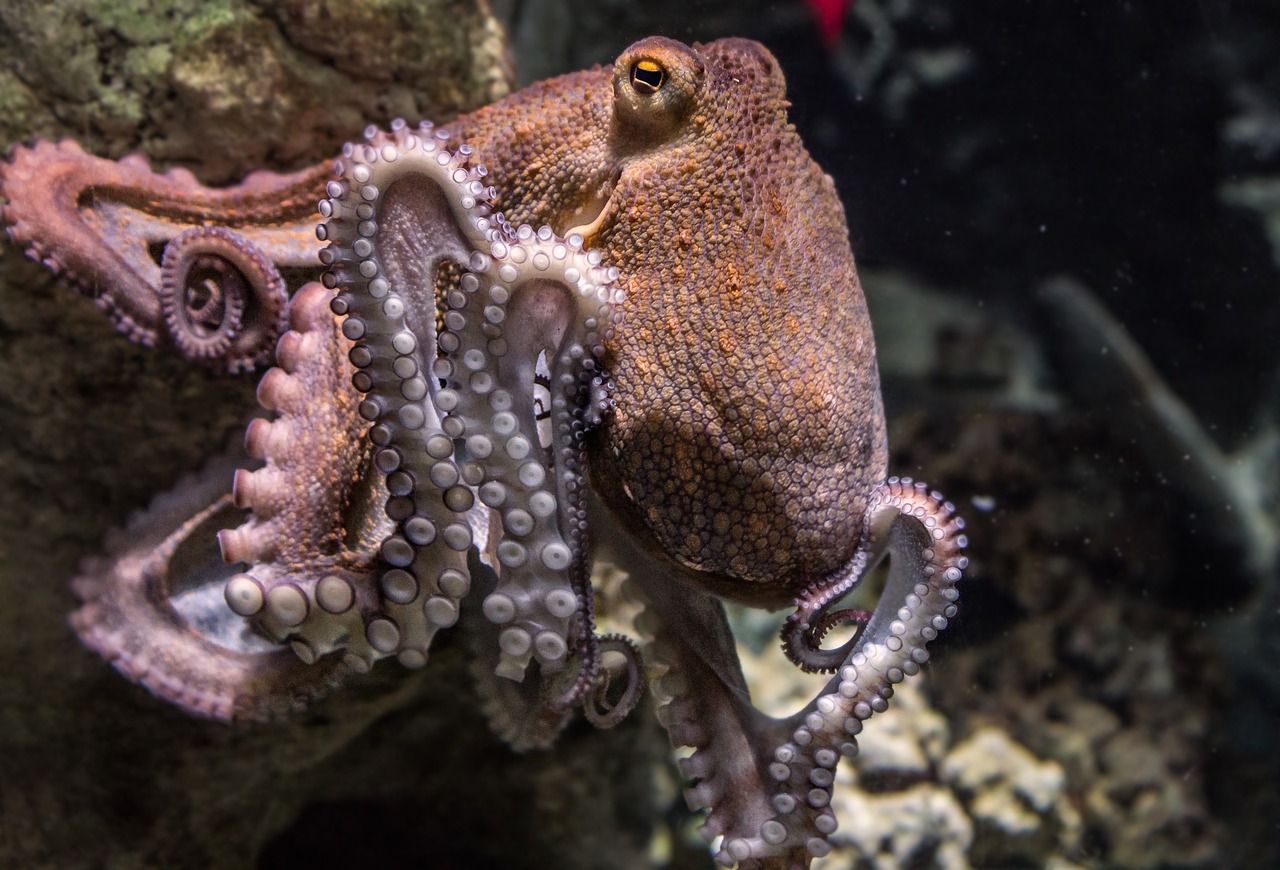 Octopuses are an evolutionary wonder of nature. This slimy creature with a bulbous head, dark eyes and 8 long tentacles have never ceased to amaze the scientific community and marine enthusiasts. In this article, we are going to discuss the answer to the million-dollar question “Do octopus have bones?”

Octopuses are invertebrates and they do not have bones. The only hard part in their body is the tiny beak which it uses to rip apart its prey and to eat them. The lack of bones is the greatest evolutionary advantage they possess which makes them capable of squeezing themselves in and out of tight spaces.

Did Octopuses ever have bones?

Octopuses are the result of years of evolution that has happened. In a study published in the journal Proceedings of the Royal Society B: Biological Sciences it is stated that the ancestors of octopuses were very much different than the present-day octopuses we see.

The study clearly shows that octopuses were not always squishy creatures rather they had hard shell exoskeleton protecting them like the shell of a snail.

It is believed that they lost this protective shell during the Jurassic and Cretaceous periods. This made them squishy creatures capable of becoming more agile helping them in better evasion from potential threats.

How do their muscles work in the absence of a skeletal system?

They may be lacking a skeletal system but these squishy creatures are far more agile and powerful than what we can all imagine. Their body consists of a 3-dimensional array of muscle fibers that rely on an alternate support system called a muscular hydrostat.

Never heard of muscular hydrostat? I bet we all have.

Our tongue is a perfect example of a muscular hydrostatic support system.

Compressing of muscle fibers at one end causes a repulsive force creating a movement in another part. These movements are so finely controlled that a whole lot of study is happening on figuring out how it is done.

This presence of a muscular hydrostatic system makes their arms capable of operating in highly constrained and complex environments by drastically changing their shape, bypassing obstacles and squeezing into narrow holes. This explains why these creatures can be found hiding inside bottles, boxes and ship wreckages on sea beds.

The graceful movement of an octopus- Demystified

The graceful movement of an octopus in water using their 8 long limbs has always amazed and puzzled marine enthusiasts and biologists. In fact, it is something that has confused the scientific world.

The answer for which has been found by a group of young scientists at Jerusalem.

These researchers at the Hebrew university filmed the graceful movements of an octopus swimming and studied them frame by frame. What they discovered was quite mind-boggling.

They discovered that each individual arm of an octopus pushes its body in different directions. Which means all it has to do is to decide which way it has to move and choose the correct limb to move in that direction.

“The octopus only has to decide which arm to use for the pushing – it doesn’t need to decide which direction this arm will push. It has found a very simple solution to a potentially complicated problem – it just has to pick which arm to recruit. Every time we try to understand something new about the octopus, there are new surprises.”

–The research team at Hebrew university

These 8 limbs are in fact extraordinary organs as they are able to exert great force and grip, move with a wide range of velocities and can delicately manipulate objects, all without any rigid skeletal element inside them.

How do Octopuses control their 8 arms?

Octopuses lack a centralized nervous system, unlike the vertebrates. Rather two-third of neurons are spread across their body mainly concentrated on their arms. It is said that these intelligent neurons can make a decision on their own without receiving any inputs from the brain.

It has been found that octopuses have in excess of 500 million neurons and out of which 350 million are found on their long arms arranged in clusters called ganglia.

The nervous system of an octopus consists of central brains and 8 large ganglions on the base of each arm which controls their complicated movements. The presence of ganglions allows the octopuses to react faster to external factors.

To make things clearer let’s take an example of an octopus hunting a prey. Once the prey has been identified and it is in the reach of its arms the ganglion directs the arms to catch its prey and it is not the central brain controlling this action. Only when the prey has been caught the central brain directs the arms to bring the food to its mouth.

How do Octopuses move around without bones?

Octopuses are generally chilled out species. They mainly move around about by slow crawling clubbed with some small swims in a head-first position. In case they sense any danger or while nabbing a prey they swim backward which is their fastest means of locomotion.

Let’s have a look into their slowest mode of locomotion

When in no hurry they prefer slow crawling over either solid or soft surfaces resembling a diver’s walk on the sea bed. There are powerful suckers on each of their 8 limbs which they use while crawling around.

At first, several arms extend forward out of which some stick on to the small rocks or substrates and then they pull themselves with its powerful arm muscles towards that rock or substrates. Once the progress is made these arms detach from these rocks and other arms repeat these action until the destination is reached.

Though this may seem to be very easy, in reality, it’s not. It has been found that during this process the heart rates of these animals rapidly increases, hitting nearly double the nominal rate. It takes them almost 15 minutes of rest to bring their heartbeat to the normal level after these small yet tiresome movements.

There are rings in the arms of an octopus that can actually bypass the impulses from brains. In case they sense a threat or they need to make a move to nab a prey they move faster by expelling a jet of water out of their body. This movement is also called known as jet propulsion in octopuses.

They have a muscular mantle cavity that they use to get the oxygenated water to their gills (respiration). When they need to move faster they take in water through the mantle and force it out of their siphon which is situated at the central part of the mantle.

The force of water coming out through the siphon pushes the octopuses in the opposite direction (Newton’s 3rd law). These equal and opposite forces send these animals jetting away resembling the functioning of a rocket ship.

The direction and speed of travel are adjusted by changing the direction at which the siphon is pointed and the pressure at which water is expelled. Most commonly seen way of jet propulsion in octopuses is with the siphon pointing towards the head and arms pushing the body giving them more speed.

As discussed, the heartbeat of octopuses rapidly increases even with small movements. While engaging in Jet propulsion and swift maneuvers they literally push themselves to the brim by increasing the mantle pressure to a high that nearly causes their heart to stop beating leading to progressive oxygen deficit and death.

The intelligence of an octopus arm!

Octopuses have always been a matter of fascination for marine enthusiasts and researchers. These squishy creatures are known for being a lot nerdy than what we can imagine.

It won’t be wrong to say their intelligence lies in their 8 long tentacles each with millions of neurons on them.
As discussed in the previous section their arms are the end results of millions of years of evolution. These squishy creatures are capable of using their arms to solve complex puzzles, untie knots, open jars, and intelligently camouflage.

But did you know that they have the ability to regenerate their lost arms?

Similar to lizards which can regenerate its tails octopuses have the capability to regenerate its intelligent arms in case of amputation. To do this they use a protein called the acetylcholinsterate.

The fact that humans have similar protein in their body has intrigued the scientific community and extensive research has been happening on this. Who knows maybe the key to human limb generation may lie within octopuses!

Are Octopuses really from our planet? How intelligent are they?

There have been many conspiracy theories claiming octopuses to be not around from our planet, intriguing right? But don’t give ears to these false claims.

Octopuses are a lot nerdy than what we can imagine considering their closest living relative to be a sea slug. These squishy creatures are capable of solving complex puzzles, untie knots, open jars, capable of intelligent camouflage and most importantly they are great escape artists.

Some additional information about Octopuses