Other than being smelly on rare occasions, skunks can make great pets. They’re adorable and their curiosity and intelligence will keep you thoroughly entertained throughout the day.

If you’re considering getting a skunk to keep as a pet, here are some cute and funny names for skunks you can use. 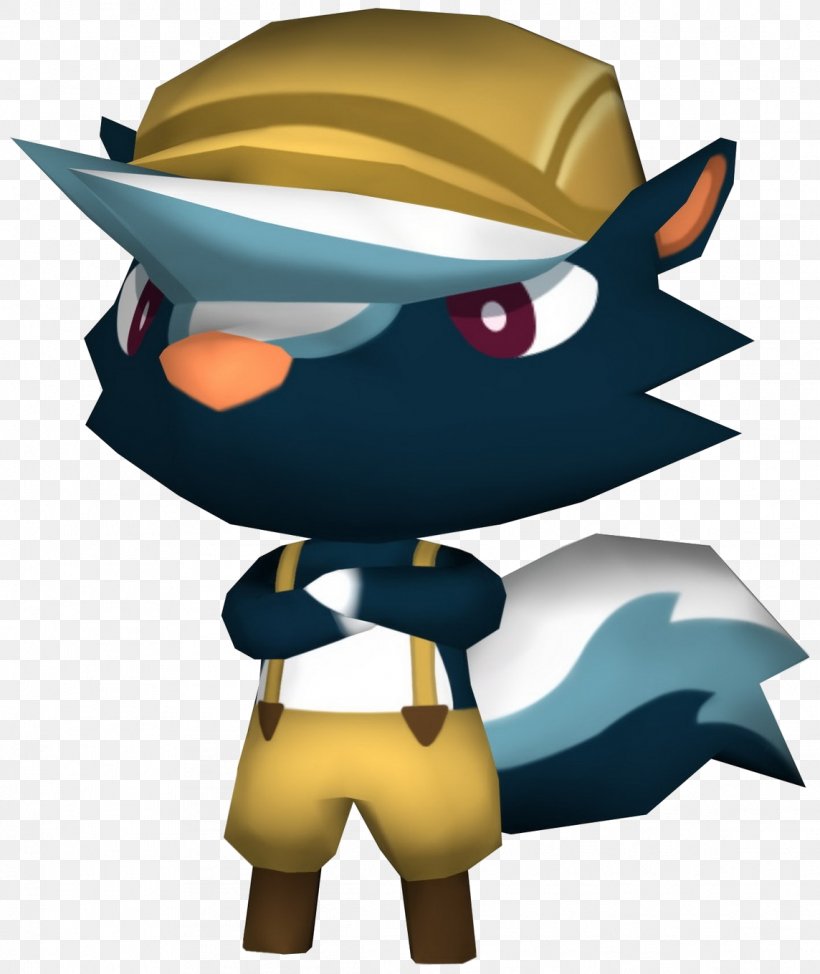 To start off the article, here’s a famous skunk name you should know about.

Kicks: Kicks is a cool and fictional skunk from the video game series, Animal Crossing.

Other than that, he wears brown shorts that are held up with suspenders and a cool hat over his head.

You probably won’t find a skunk with more swag than Kicks.

Cupcake: Cupcake is often a term of endearment for children and babies. Therefore, it makes sense to name your baby pet skunk the same.

Sugar: Sugar is also a common term of endearment. So, if you like the sound of it, don’t hesitate in naming a baby skunk that.

If you’ve a baby skunk as a pet, here are a few more names you should consider.

Nugget: It’ll be hard for you to find someone who doesn’t like chicken nuggets. They’re small, cute, and awesome – which is how you could describe your skunk too. So, the name Nugget is apt for an adorable little skunk. You can always modify the name too and call your skunk Nuggie, especially when it’s a baby.

Milo: This name is a common name for dogs (think back to the dog in the popular comic book series called the Mask), but that shouldn’t stop you from naming your skunk that. In the animated series adaption, Milo the dog is a pretty cute dog (as all are, realistically speaking), which is why this name is added to the list of cute names.

Happy: Every pet owner wants their pet to be happy in their homes. So, consider naming your pet Happy as a way to remind yourself of your duty to keep yourself happy.

Skunks are adorable little creatures, so we created a list of cute skunk names that you can use for your pet. Check out some of these names below. 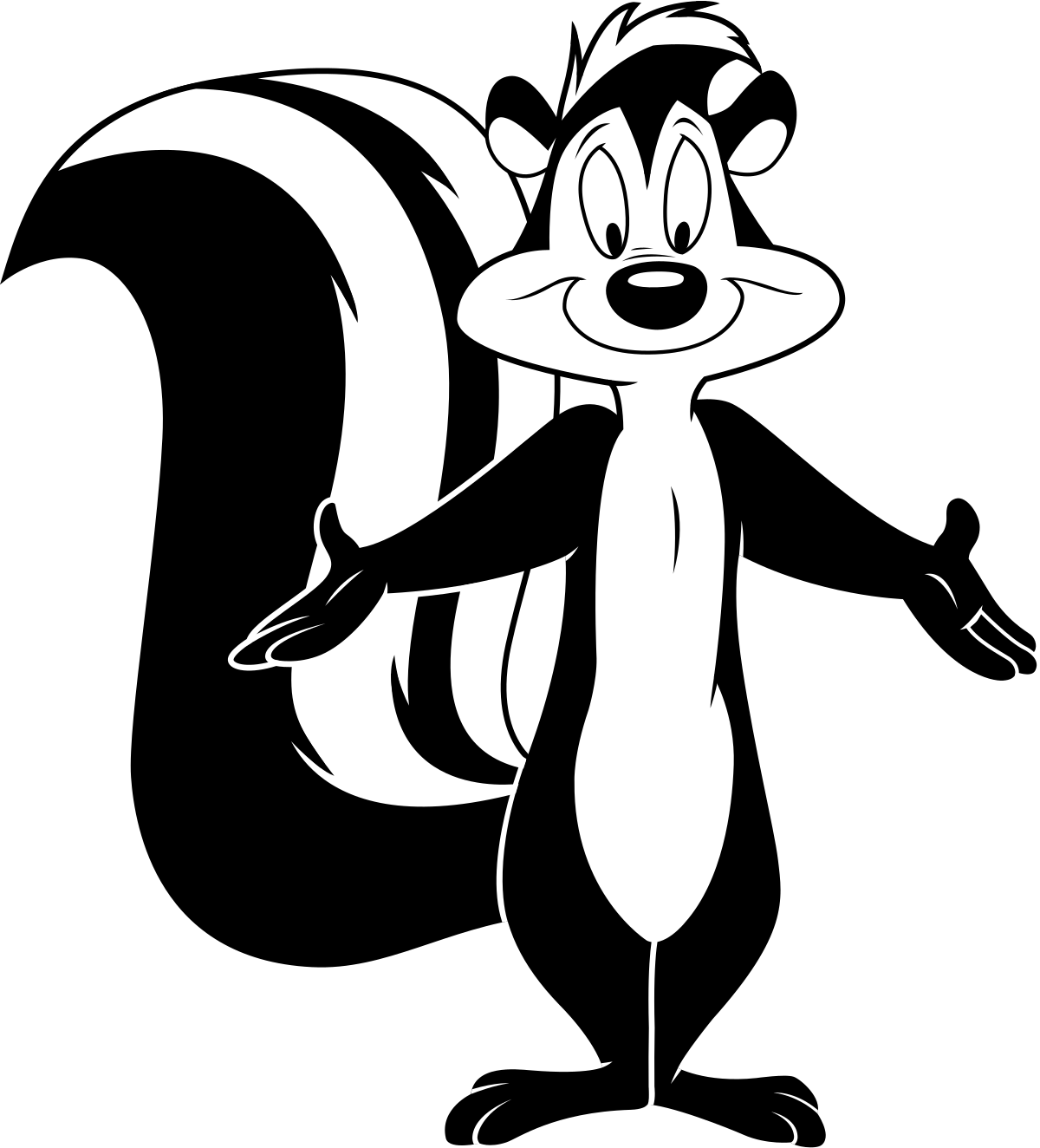 Over the years, there have been only a few fictional skunks in animated TV series. So, we selected 3 of the most popular ones and have discussed each one in detail below.

Pepe Le Pew: This is the name of a character from a very old cartoon called Looney Tunes. Pepe first appeared in 1945 and ever since has been a popular character amongst children and adults. The character is mostly known for his general success of romantic relationships. The character was also present in the popular 90’s film called Space Jam.

Bradley: Bradley the skunk is a fictional special agent in the TV series Codename: Kids Next Door. Bradley is also known as Numbuh 6 and works with the rest of the team of special agents on their missions in helping other people.

Flower: If you’re a fan of the classic Disney films, you’re going to like this name. Flower is a character in the 1942 film Bambi. He’s an adorable skunk who cares about others around him – which he expresses through his consistent kindness and empathy. 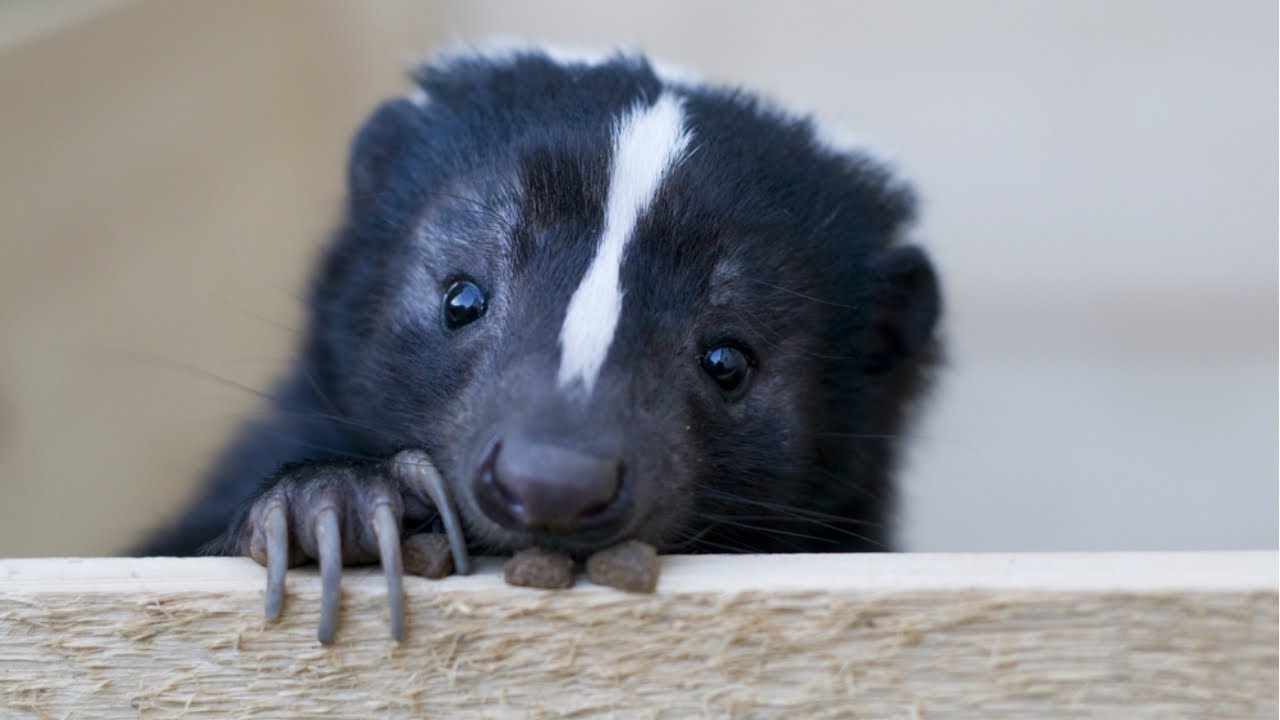 Badger: The name Badger is used for people, and it’s the name of an animal that looks a little like skunks. The name is also easy to pronounce because it contains just two syllables.

Mozart: If you’re a musician or are someone who generally appreciates Western Classical music, you can name your pet after a musical genius and possible inspiration Mozart. You can call your pet Mozzie (pronounced as mod-zee) as a nickname too.

Kylo: For those of you who are fans of Star Wars, consider naming your pet skunk Kylo. It’s a short and simple name, which comes from the character Kylo Ren. This character is dressed in black (kind of like your skunk) and is almost always a little angry. Hence, this name is perfect for a pet skunk that’s a little feisty.

If you plan to keep a skunk as a pet in your home, here are some names you should consider giving them.

Digger: Skunks, by nature, are diggers. So, whether they live in the wild or in captivity, they will try to use their paws to dig. If you’ve noticed your pet trying to dig indoors, it would seem appropriate to name your pet skunk Digger.

Sleepy: This is another name that is derived from the animal’s general behavior. Skunks sleep a lot during the winter, almost as if they’re hibernating. That’s why we recommend you name your skunk Sleepy – it has a nice ring to it too.

Yoda: Skunks are fairly intelligent animals. So why not name your pet skunk after the wise master Yoda from Star Wars? Even if you’re not a fan of the film series, Yoda is still a fitting name for a skunk.

Here are some other good skunk names you should consider for your skunk.

Skunkle: If you’re a fan of Simon and Garfunkle, Skunkle is a nice little play at the name of the band.

Funky: The name Funky comes from putting the words fun and skunk together. The letter “y” at the end of it helps it sound a little catchy. All pets are fun to keep, regardless of how much effort you have to put in to take care of them. So Funky isn’t too bad for a name, is it?

Nina: If you’ve got a female skunk that’s a bit of fighter, consider naming her after the fearless Nina from the video game series Tekken.

Iris: There quite a few women with the name Iris in this world. It’s a pretty name that is derived from a Greek word that means ‘rainbow’. Other than that, Iris is also a plant that has pretty flowers. To the average person, it may seem weird to give a pet a name that connotes prettiness, but most pet owners will agree that their pets are beautiful in their eyes.

Leia: Do you sometimes feel that your skunk is royalty in your home but is also quite independent and intelligent? If your answer is yes, then you should consider naming your skunk after Princess Leia from one of the biggest sci-fi films Star Wars.

Here are a few more names that you can use for a female skunk. You can’t go wrong with choosing any one of these.

There aren’t many female skunk characters out there, which is why this list is not as extensive as the others. That said, we included some interesting names that you can use.

Fifi La Fume: Fifi is the female counterpart of Pepe Le Pew from the animated series Tiny Toon Adventures. She’s a lilac-colored skunk that always seems to be looking for love – which is what you should always give your pets. If you feel this name is too long, reduce it to just Fifi.

Here are a few more names:

In popular media, skunks generally have a bad reputation for being too smelly. However, these adorable creatures only secrete a smelly liquid if they detect the presence of a predator. So if you shower your pet skunk with love, it’ll never smell bad.

How Not to Capture a Skunk

How Does a Skunk Spray?