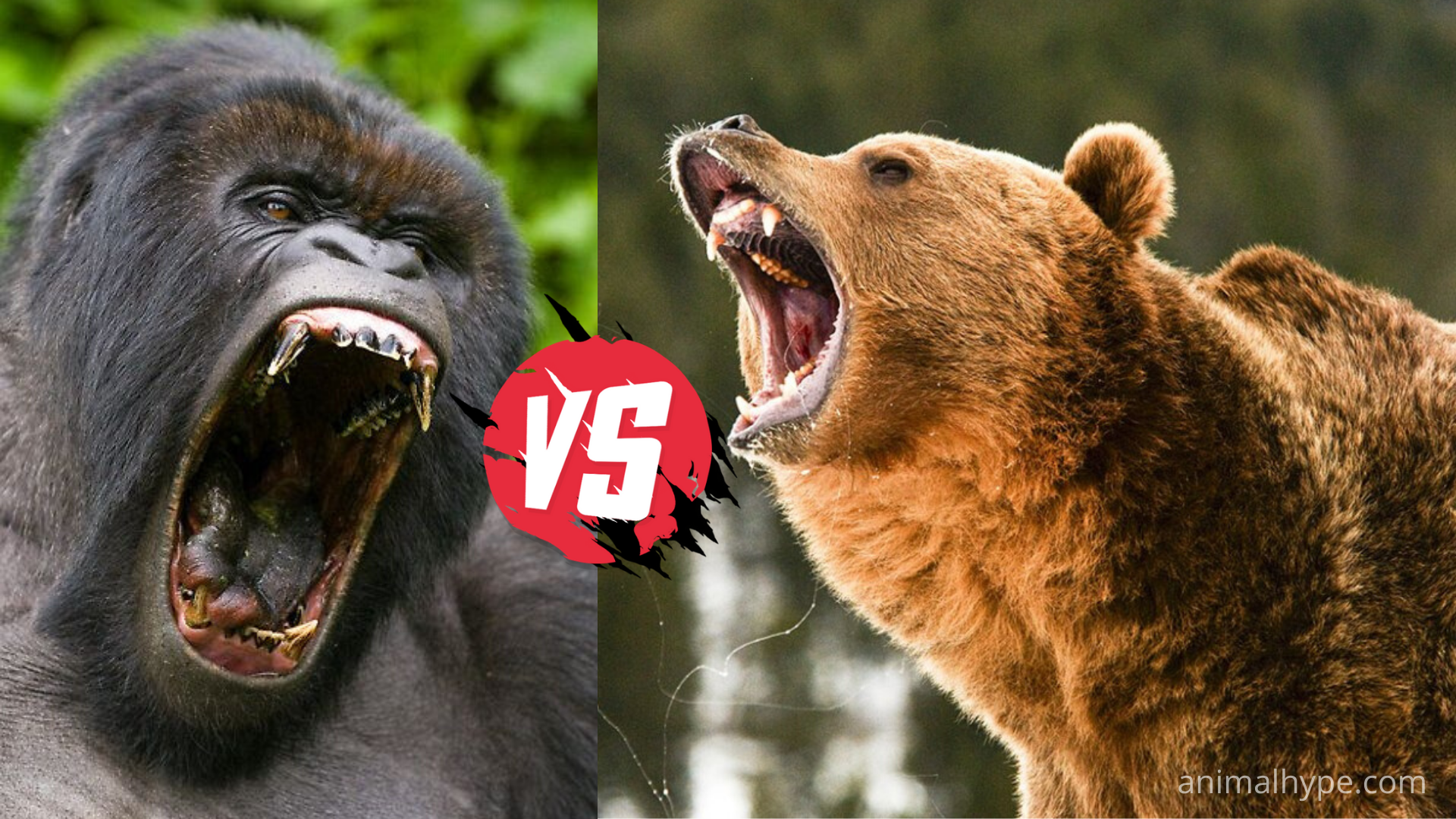 There are several astounding battles that have taken place in the wild. Often they are animal vs. animal but otherwise, a man vs. animal, which doesn’t happen frequently but one battle keeps popping up and has kept the people debating as to who will win in a fight, a Silverback Gorilla or a Grizzly bear.

It is questionable, though, since either animal doesn’t share the same strength, mass, height, weight. A silverback gorilla and a grizzly bear have their abilities and strengths in their own unique way; both are different and are remarkable in their own ways.

In this article, we shall pit them against one another in a fight and compare their strengths to know who will win, one-on-one. 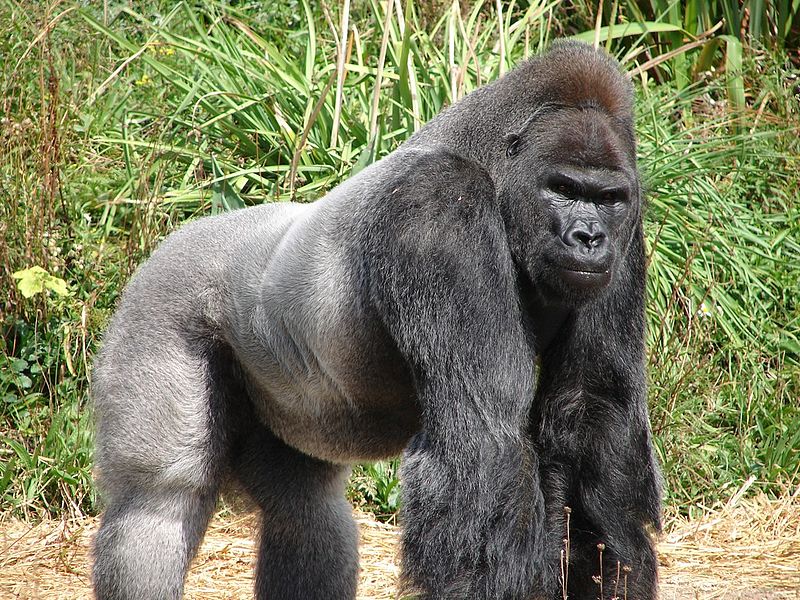 Mountain gorillas or silverback is a subspecies to an eastern gorilla (Gorilla bringer). Adult males are called silverbacks because of a saddle of grey or silver-colored hair that develops on their backs with age.

The hair on their backs is shorter than on most other body parts, and their arm hair is especially long. A Silverback is the leader of a group (alpha male).

The silverbacks are an endangered species, and their population is found in Albertine Rift mountain cloud forest, spread across the borders between Rwanda, The Democratic Republic of Congo, and Uganda. These are Virunga volcano ranges; some are dormant while some are not: Karisimbi, Mikeno, Visoke.

Vegetation is extremely dense at the bottom of these volcanoes. Another population is found in Uganda’s Bwindi National Park.

Forests, where these gorillas live, are often cloudy, misty, and cold. Their home range size, i.e., area, used by the gorillas during a year, varies and depends upon factors such as availability of food.

They are listed as an endangered species, which is because of poaching and habitat loss due to activities such as illegal mining.

Silverback gorillas are initially herbivores, and their diet mostly consists of leaves, shoots, and stems of several plant species apart from that they also feed on barks, roots, flowers, fruits, and small vertebrates.

Silverback gorillas are generally calm and shy; they are highly social and live in cohesive groups; they are non-territorial since they defend their groups rather than the territory.

In case of the external threat from any other animal or even from another gorilla, a silverback will stand their ground and protect their group even at the cost of their own life.

The height of a male mountain gorilla standing erect would be 150cm, whereas females would stand at 130 cm.

Gorilla’s muscles and skeletons are much more robust in comparison to humans. They can also reach a speed of 23-25mph. 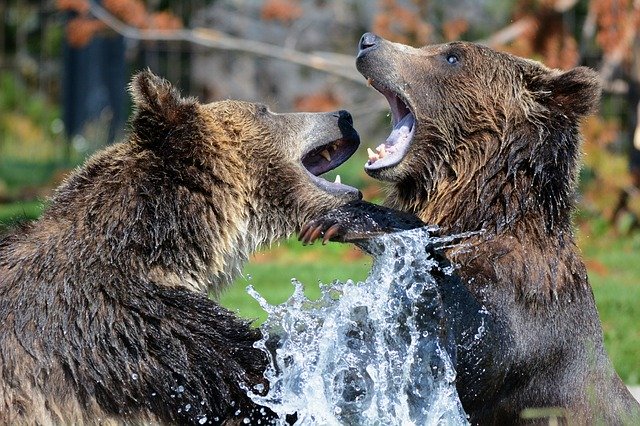 It is a subspecies of brown bears located in Northern America, they are not an endangered species due to the measurements taken by the state.

The reason as to why these bears are called grizzlies is due to their gruesome and fear-inspiring character. The grizzly bears located inland are smaller in size in comparison to the grizzlies located on coasts.

The costal bear is less aggressive in comparison to inland bears.

Their populations are found in Alaska, Western Canada, Northwest United States (Idaho, Montana, and Wyoming), and as far as Yellow Stone National Park. Their home range can be as broad as 6000 square miles. Their ideal habitat is isolated and far from development.

Grizzly bears are Omnivores, so they mostly prey on anything ranging from a rodent to a moose or an elk. They also scavenge food or carcasses left behind by other animals or birds.

Fruits and insects are also an integral part of their diet. It is not their usual behavior to gather, but that pattern of social behavior is broken when they catch salmon spawns during summer.

In addition to this, grizzly bears steal food from other predators from time to time.

They are generally solitary creatures who roam the forests until the time they mate with an obvious exception of female Grizzlies with her cubs.

Male grizzly bears often engage in battles with each other, especially in the duration of mating season. They stand their ground and attack when threatened, surprised, or if the female has cubs but usually avoids contact with humans.

This difference in weight is due to the types of food and nutrients being consumed.

Can the hunter become the hunted?

Regardless of the type of bear as an apex predator, the list of a natural predator for bears is small, apart from other bears, humans, scavengers, and the occasional tiger.

Considering its brute strength, magnificent size, and agility, bears are at an advantage against any animal; their only disadvantage is that they are solitary creatures that make them vulnerable to animals who attack in packs, especially baby bears are at risk.

Silverback Gorilla vs. Grizzly Bear: who would prove to be a better contender?

In any animal vs. animal fight in the wild, there is a general presumption of bigger animal winning, with their mass and strength, with the obvious exemption of weaponry like venom in snakes. In such a scenario, things may go differently.

As mentioned earlier, stronger and bigger animals generally win, so with the above-given statistics, we know what the outcome of the fight already is, but it won’t be a one-hit win.

A Silverback gorilla’s arms are longer in comparison to a bear that gives him an advantage in reach on a grizzly bear, but that’s about it.

Grizzly bears are taller than silverback gorilla and more aggressive in comparison, matching a gorilla in strength and size with a plus point on claws won’t be a problem.

Yes, silverbacks are strong too and are known to break down small trees in a go, but he only stands a chance if he goes for the neck of the grizzly bear from behind. If he attacks head front he’d only be served humongous razor-sharp claw.

Assuming a silverback does get around a grizzly’s neck and bites into his neck with his 1300 psi bite force considering bears have a weaker neck, this is only possible if the silverback is of an exceptional size matching it up to a grizzly bear well in other primates a chimpanzee would be a totally different story.

On the other hand, if a silverback tries to outrun a grizzly, he’d be ripped to shreds since grizzly’s run at a faster speed (34km/h) that’s a whole 15 number difference.

Also, if agile and dextrous arms of a gorilla got torn by a grizzly bear, his thumbs would prove to be of no use, so head fast running into a fight with an already enraged and aggressive killing machine, in this case, a grizzly bear would be stupidity. They are known to kill and eat mostly meat, not just small/other animals but bears of other species as well, especially young ones.

1. The silverback feels the troop is in danger or

2. If a grizzly feels surprised/ threatened to itself or it’s cubs in case of a female. This shall only take place if either of them has a full intent of killing the other.

Also even if a gorilla does climb a tree in the duration of the fight, a grizzly would follow it, “grizzly’s cant climb a tree” is a huge misconception.

Although thinking that a silverback would give up easily even though they’re not known to be aggressive is a mistake, a silverback in order to protect his troop/band would fight even if it kills him.

How Much do Grizzly Bears Weigh?