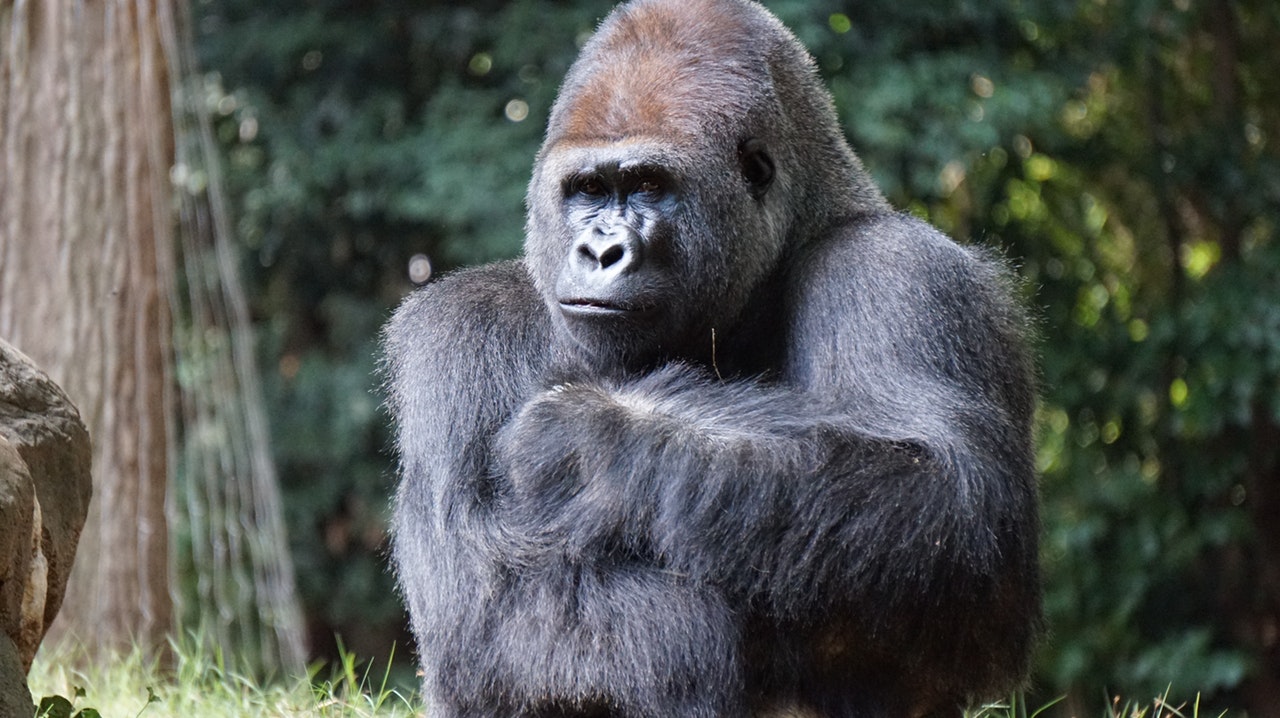 If you are looking for the perfect gorilla name, look no further! Our awesome list contains all sorts of gorilla names, from beautiful and poetic to down-to-earth to downright hilarious. Whether you’re stuck on what to name a baby gorilla, want an idea for a pet gorilla, or just want some inspiration for naming your pride of gorillas – this list has you covered!

King Kong was a great movie, and it introduced us to a gorilla that’s loving but terrifying, too. Most people had mixed feelings about gorillas, but it all quickly changed with Tarzan.

If you are a fan of Disney movies, it’s likely that you grew up watching Tarzan. It was a great animated film no doubt, but what made it even more special was the relationship of Tarzan with his adoptive gorilla mother, Kala.

It was a work of fiction, but the emotions this beautiful and extraordinary relationship evoked made us all fall in love with gorillas. Of course, their real counterparts don’t talk in English or accidentally make good music, but they are equally as majestic as the ones we saw in the movie.

In real life too, gorillas are highly intelligent, and years of research have proven that their mental capacity is far above what we’d expect from an animal. They live in close-knit families and share some similar emotions to humans. This is quite expected since they do share about 98% of human genetic material.

While gorillas are majestic creatures and can be quite gentle, you don’t want to get on their bad side. Gorillas are known for their aggressive-at-times nature and are especially dangerous when someone attacks their family. If we’ve learned anything from watching Tarzan, then it is never to come in between a gorilla and their family.

It’s unlikely that you’ll get a chance to adopt a baby gorilla and keep it as a pet, but don’t let that stop you from looking for gorilla names. Over the years, there have been many famous gorillas who gained widespread fame because of their ingenuity or unique characteristics.

Let’s take a look at some famous gorilla names and the primates that exist today. 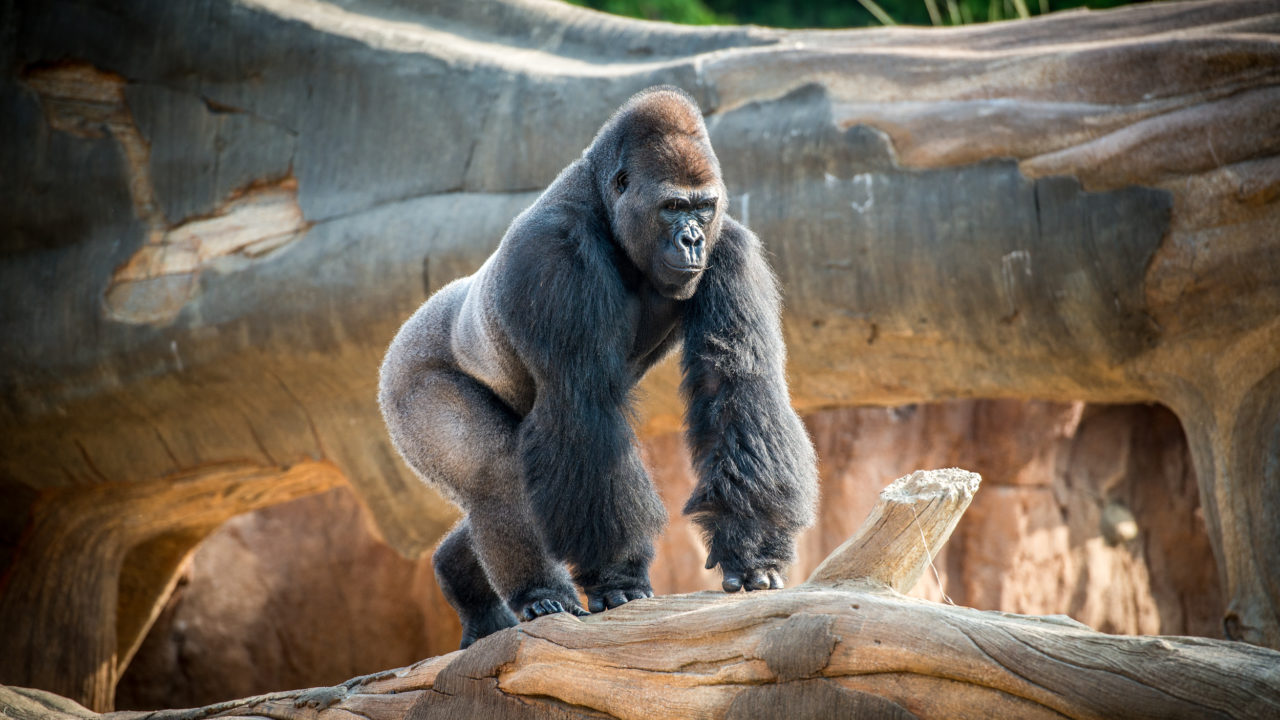 There are about 800 gorillas in zoos worldwide and most of them have been kept there to ensure that they don’t become extinct.

If you are looking for some zoo gorilla names, here are some options. 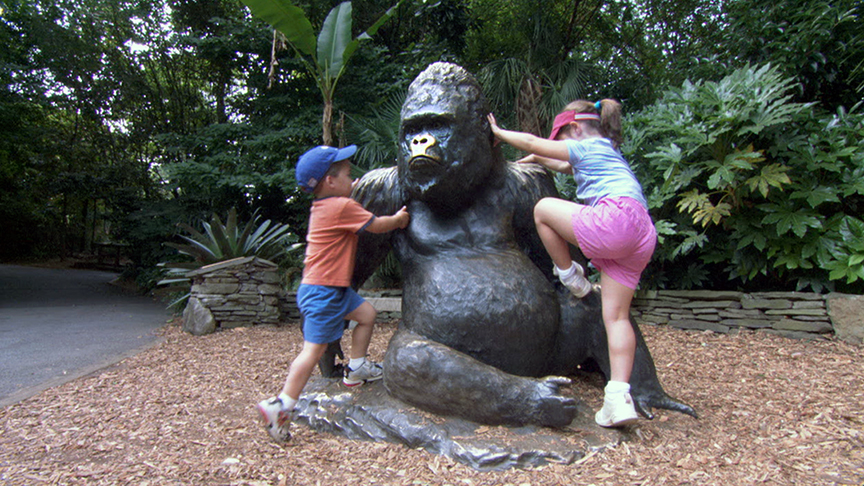 Though there are still a couple of those famous gorilla names floating around (King Kong being the most famous), the animal kingdom is an expansive and diverse one.

In order to help you out in naming your gorilla, we have compiled a list of famous gorilla names that can serve as inspiration for you.

Named after the former mayor of Atlanta, Willie B was a western lowland gorilla who was born in 1959. He lived till the age of 41 and died at his home in the Zoo of Atlanta on February 2, 2000. He fathered five children and his only male offspring was given the name Willie B. Jr.

A beloved attraction at the London Zoo, Guy the Gorilla was a gentle western lowland gorilla who was born in 1946. He was brought to the zoo in 1947 on Guy Fawkes Night, which is how he got his name.

Although he looked fearsome, he had a gentle nature, which is what contributed to his popularity around the world. He died from a heart attack in 1978, at the age of 31, but his legacy lives on. His Statue was erected in the Crystal Palace Park in 1961 and his skin was mounted by the head taxidermist of the Natural History Museum.

So you are naming a female gorilla and want something original?

Here’s a list of female gorilla names to help you get started.

Any gorilla is great to watch, but the idea of choosing a good name for your gorilla is even better. 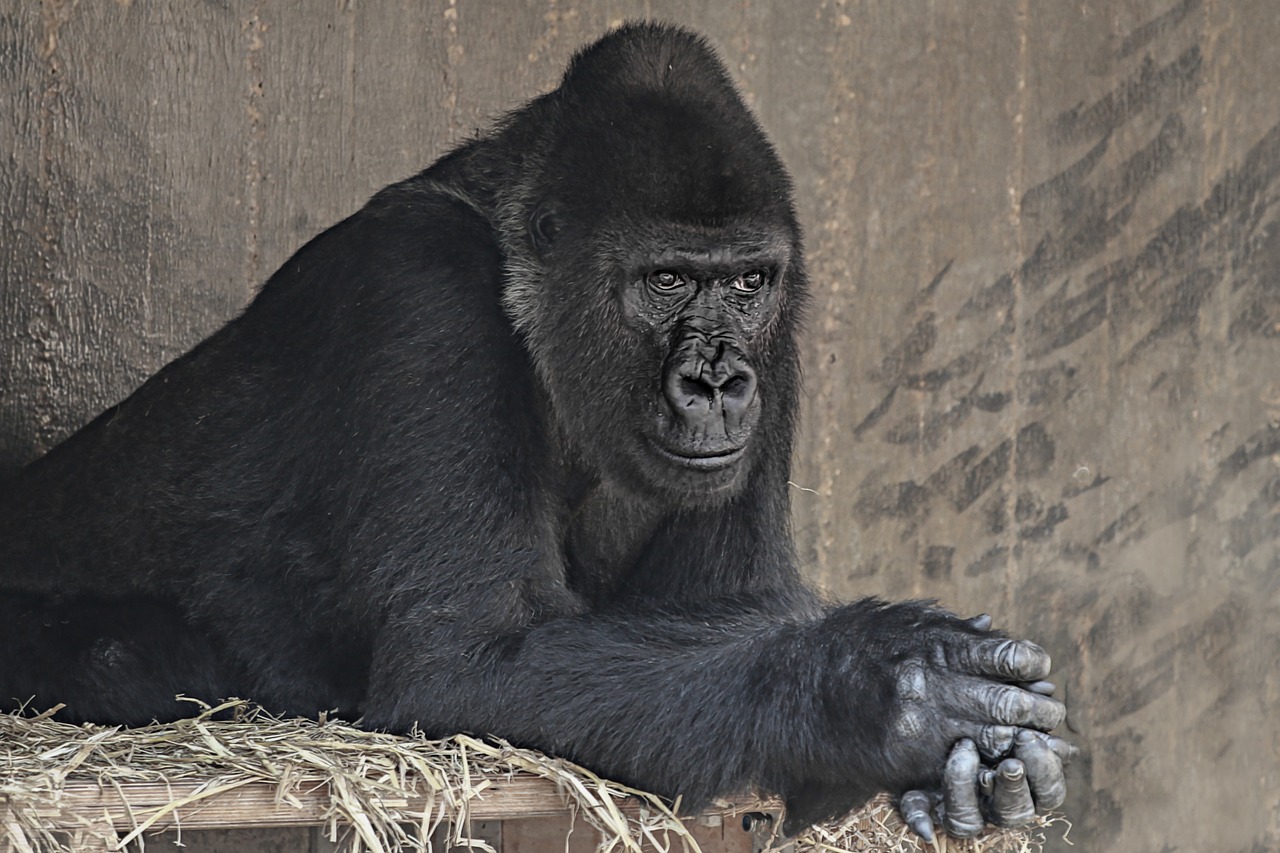 This list contains names of famous gorillas that can be used as inspiration for naming your new gorilla.

The oldest living male gorilla of his time, Massa was born in 1930 and died from a stroke in 1984. He was born in Ghana but was shipped to the US, where he was adopted by Gertrude Lintz. As he grew older, Lintz sold him to the Philadelphia Zoo in 1935.

Gargantua was Gertrude Lintz pet. He was a lowland gorilla who, at the time, was claimed to be the largest captive gorilla. He died in 1941 from double pneumonia and his skeleton was donated to the Peabody Museum.

The only albino gorilla in the world, Snowflake, was destined to get everyone’s attention from the start.

Born in 1964, he was captured in 1966 and the rest of his family was murdered. He eventually landed in the hands of the primatologist Jordi Sabater Pi, who gave him the name Copito de nieve, which means little snowflake in Spanish.

Due to his albinism, Snowflake had poor vision. Further tests on his DNA revealed that his parents were uncle and niece and had received a recessive gene from both of his parents, which caused his Albinism.

Did you name your gorilla George? No? Well, have you decided on a name yet? Up until now, it’s been a fairly lonely road to walk alone with the problems of choosing a name for your gorilla.

That’s why I’ve created this list of male gorilla names. It’s an all-inclusive list of unique names which you can use to finally solve your longstanding problem of finding the perfect name for your male gorilla. Jenny was a female western lowland gorilla. Although she was born in the wild, she grew up in captivity and celebrated her 55th and last birthday in Texas in 2008.

She contracted an inoperable tumor and was euthanized because she had stopped eating and drinking.

The act, although done in kindness, was a difficult decision for the zoo officials. She was the oldest living gorilla of her time, a title which was then taken over by Colo.

Koko was one of the most intelligent gorillas the world had ever seen, and she knew it too. She was born in 1971 at the San Francisco Zoo and was named Hanabiko. Hanabiko is a Japanese name that translates to ‘firework’s child’, a name that describes the events of her birth date, July 4.

She was an exceptional animal and was the first gorilla to communicate in sign language. She knew over 1,000 signs from the American Sign Language and would understand 2,000 words of spoken English.

This milestone was achieved with the help of her long-term trainer, Francine Patterson. Many researchers doubt the claims but there have been many occasions where Koko has proved her prowess.

Silverback Gorillas are not uncommon. There are well-known gorilla names that have been featured in movies, TV shows, and even video games.

You’ll find some of the most famous silverback gorilla names below.

A native of the Virunga mountains, Titus was born on August 24, 1974, and was named by the famous primatologist Dian Fossey. He is one of the most famous silverback gorillas and has even been featured on the BBC documentary fil, Titus: The Gorilla King. He died in 2009 at the age of 35.

A natural-born artist, Michael Puig, was a resident of Woodside, California, and was the ‘student’ of Koko, who taught him American Sign Language. His parents were killed by poachers and he eventually ended up in Woodside. He became famous throughout the world when it became known that he could paint. His abstract art was even translated and seemed to have hidden meanings.

He was a 17-year-old, silverback gorilla who was born at the Gladys Porter Zoo in Texas. He was shifted to the Cincinnati Zoo to be alongside Chewie and Mara, who were both 19 years old at the time.

Although at the age of 17 he hadn’t reached the breeding stage, the zoo officials hoped that his move there would fare well in the future for the low gene pool of lowland gorillas.

He was shot and killed on May 28, 2016, when he grabbed and dragged a 4-year old boy who fell in the gorilla’s enclosure. His death was received with sorrow all over the area since he was one of the most loved animals in the zoo.

Silverback gorillas are a category of gorilla that is the largest, and the leader of the troop. With all the different variations of names available in this list, you should be sure to find a name that suits your gorilla perfectly!

When it comes to funny gorilla names, there are many options.

Varying in their degree of humor, some of these names will leave you in stitches, while some of them will put a smile on your face.

So, let’s get started!

Whether you have a soft spot for gorillas or are terrified of them after watching King Kong, there’s no denying the fact that these primates have made a place for themselves in this world.

People are amazed by their ingenuity and they have made many efforts to allow their population to grow. These endangered species need all the care they can get.

So, as you go through these funny gorilla names or marvel at the famous female gorilla names, do give these creatures a thought and donate as much as you can for them!

Also, bookmark this page and come back to it whenever inspiration strikes.

That brings us to the end of our article! Thanks for taking the time to read this far.

I hope you enjoyed reading this article and gained some useful information to help you in your gorilla naming endeavors! If you’re ever stuck on a naming project, come back to this article and try one of these gorilla names – you never know which one might spark your creativity.

It’s been great writing for you, and hopefully, our paths will cross again soon!

Grizzly Bear vs Silverback Gorilla Fight – Who will win?