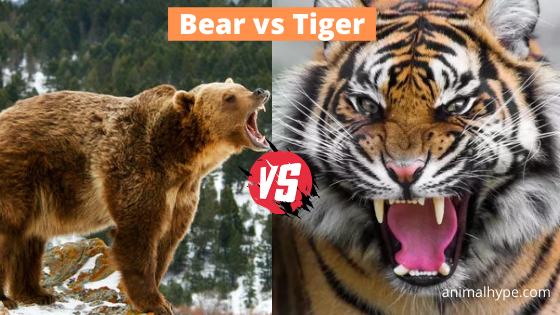 What if two of the most ferocious wild animals ever—a Grizzly Bear and a Siberian Tiger—go to battle? Grizzly Bears are the top predator in the North American wild. These giants are a subspecies of the brown bear. The Siberian Tiger is native to the remote forests of Siberia. Let’s compare the two giants to find out who will be crowned as our ultimate winner if there was a fight between them.

Let’s get to know our fighters

Grizzly Bears are giant beasts with great physical strength. They are a smaller subspecies of the brown bear. Native to the jungles of North America, the grizzly bear sits on top of the food chain. Grizzly bears get their name from their white-tipped or grizzled fur. Today, these brown bears are found in North America and Canada.

The Siberian Tiger, as the name suggests, is native to the region of Siberia, Russia. Some are also found in China and North Korea. They are one of the largest wild cats. Siberian tigers are intelligent and aggressive creatures. They prefer to live and hunt alone. Today, they are close to extinction, found mostly in zoos.

A full-grown male Grizzly bear can weigh a massive 800 pounds. Their average shoulder height ranges from 3 ft 6 inch to 4 ft 1 inch, while the head and body length lie between 7 ft 1 inch to 7 ft 8 inch. The average lifespan of a Grizzly bear is around 25 years in the wild.

A Siberian tiger is somewhat small in size when compared to a Grizzly bear. They may weigh about 660 pounds. The average shoulder height lies somewhere between 3 ft to 3 ft 3 inches. The head and body length amount to 7 ft 4 inches. They can survive for 15 to 18 years in the wild.

Grizzly bears mostly prey on salmon fish, birds, elk, moose, bison, and deer. They are also known to hunt black bears. Being omnivorous, they also eat fruits, wild berries, roots, and insects. Although they are solitary creatures, they do come together in groups during salmon season.

Siberian tigers are carnivores. They commonly prey on wild boar, moose, elk, Siberian musk deer, and Manchurian wapiti, which is a kind of elk native to east Asia. They are also known to hunt Asiatic black bears and brown bears.

Comparing features of a Grizzly Bear and Siberian Tiger

Strengths and weaknesses of the two beasts – Bear vs Tiger

Both Grizzly Bears and Siberian Tigers are powerful beasts of the wild. If there was a hypothetical fight between a Grizzly bear and a Siberian tiger, who will emerge as our ultimate winner?

Let’s explore their strengths and weaknesses to find out.

Which of the two animals has the sharpest claws, which can cause maximum damage? The Grizzly bear and the Siberian tiger are equally matched in this category. Both have deadly claws of equal size of 4 inches.

Now let’s look at their fangs or teeth to find out who can land the fatal bite. An adult Grizzly bear has sharp fangs that can go up to 3 inches in length. A Siberian tiger has long and deadly canines, which maybe 2.5 to 3 inches long. They are perfectly suited to tearing flesh.

When it comes to appetite, the Grizzly bear eats a lot more than the Siberian tiger. A Grizzly bear consumes 90 pounds of food per day, to keep up its massive bodyweight of 800 pounds. A Siberian tiger eats 60 lbs of meat per day on an average.

Who is the most deadly killer of the two? Although Siberian tigers are infamous as man-eaters, stats say that they kill only one person every year on an average.

Humans are easy prey for tigers, which have gotten old and weak, but the Siberian wilderness is a remote and sparse region. This means fewer casualties. When it comes to Grizzly bears, nearly 3 people in North America and Canada are killed by bear attacks every year on an average.

The Grizzly bear is a native species of North America. The climate is cold in this region, with dense forests and mountainous terrain. The Siberian tiger is found in Siberia, Russia. It knows the harsh Siberian landscape well.

Who has a better chance of success in a fight will also depend upon the battleground. The Grizzly bear is a physical giant, with great body strength. However, it falls behind when it comes to killer hunting skills and speed.

The Siberian tiger, who has mastered the art of surviving in the harsh Siberian wilderness, is the master hunter. It has the advantage of stealth, strength, and skill.

Grizzly Bear vs. Siberian Tiger: Who is our ultimate champion?

A Grizzly Bear and a Siberian Tiger are almost equally matched in strengths and weaknesses. If the two go head to head, it is sure to be an intense battle.

Will the mighty and powerful Grizzly bear defeat the deadly Siberian Tiger? Or will it be the other way around? Let’s stack the odds and find out our ultimate champion!

Siberian tigers are one of the most deadly predators ever. They rule the Siberian wild, being the largest among the big cats. They are adept hunters, master of stealth, and skill. Grizzly bears are more inclined towards finding food that’s easily available in the wild. They can survive on fruits, berries, and insects.

Siberian tigers are way faster than Grizzly bears. They can run at a top speed of 60 miles per hour, chasing their prey to death. A Grizzly is not a good runner, used to the forest and mountainous landscape of North America.

Siberian tigers have been known to hunt the Asiatic black bear as well as brown bears. They have an experience of hunting large prey when pressed for food. Although Grizzly bears also hunt black bears on rare occasions, they prefer easier prey.

If it comes to a fist-fight, Grizzly bears have an unexpected advantage. They will be safe from any battle wounds. They are huge in size with lots of body fat. These act as cushions and keep the bear’s main organs as the trachea and lungs protected.

The Grizzly Bear and the Siberian Tiger live in two different parts of the globe. They are too far apart to ever meet in real life and go head to head. However, what if there was a hypothetical battle between the two? What will be the last animal standing?

Do you have any guesses yet on who’s the winner? Here’s our final verdict.

When compared to Siberian tigers, Grizzly bears definitely have the advantage of size. They are bigger and heavier. They have strong paws that can do good damage to their opponent. Their body fat also keeps them safe from enemy blows. But is brawn enough to win such a battle?

The Siberian tiger has the advantage of brains along with brawn. It is the master of stealth, sneaking up on its prey and landing the fatal bite at the most unexpected hour.

The Grizzly bear is a strong and powerful animal. But the Siberian tiger has all the three winning factors combined—strength, skill, and speed. This deadly combination gives us our winner—the Siberian Tiger, one of the deadliest big cats ever!