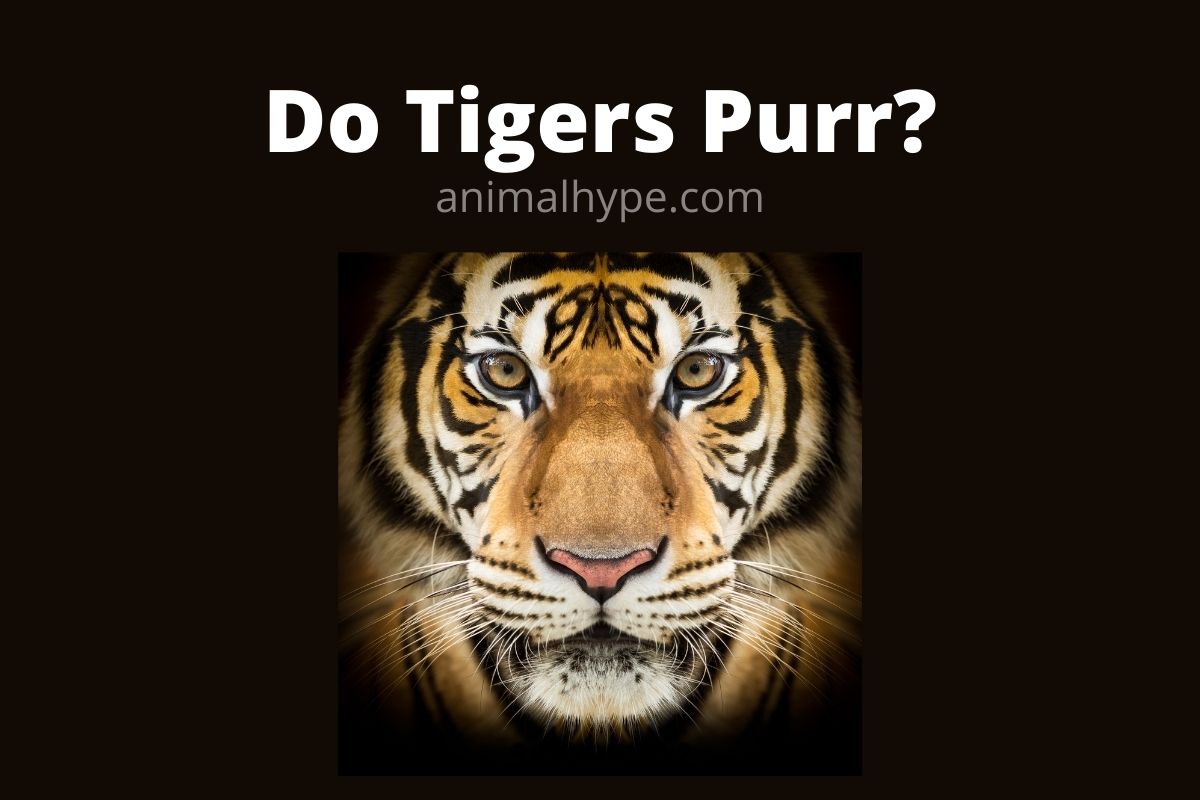 Tigers, of which there are 8 subspecies, can produce very deep roars; so deep sounding that these roars can be heard over great distances in dense jungle and through the tall grass of savannas. These fearsome roars are produced by flapping their larynx rapidly up and down sending air over the vocal folds. But do tigers purr? Let’s answer that question here.

No, tigers cannot purr. Tigers lack the ability to purr because the stiff cartilage runs from their hyoid bone to their skull, preventing them from purring. This physiological characteristic enables their larynx to roar but not to purr.

All the members of the felid family can roughly be divided into two groups: one group consists of cats that can purr, while the other one includes those that cannot. Tigers belong to the second category and are incapable of purring.

Although tigers lack the ability to purr, they are extremely loud and can spread terror in the jungle.

This article will attempt to explain why tigers cannot purr and talk about the sound they can produce instead. Later, we will also discuss the other big cats that can and cannot purr.

Although many researchers have been exploring the same question for years, they are yet to reach conclusive results. However, one theory brought forth by them seems to make a lot of sense: the ossification of the hyoid bone.

What is hyoid bone?

Most of you might already be familiar with what a hyoid is. However, for the benefit of those who haven’t heard of it, hyoid is a horseshoe-shaped bone present in our vocal cord.

Also referred to as “lingual bone” and “tongue bone,” it is situated at the base of our tongue, between the lower jaw and the voice box.

The main function of the hyoid bone is to provide an attachment between the tongue and the other muscles present on the floor of the oral cavity.

It might come as a surprise to many, but the hyoid bone is not present exclusively in humans. In fact, humans are not even the first species to possess it. Hyoid bone has been around for over 375 million years, first found in the gill arches of an ancient fish species.

Mammals like humans, birds, reptiles, and amphibians have all inherited the hyoid bone from them. Some species have even adapted their hyoid bone to be used for sucking.

The ossification of hyoid bones in the felids

As we’ve mentioned above, all mammals, including the feline family, possess a hyoid bone. However, not all cats have a hyoid that is ossified to the same degree.

The cats that have an incompletely ossified hyoid bone have the ability to roar but not to purr.

On the other hand, the ones that possess a completely ossified hyoid bone can produce the “purr” sound. There is not a single felid that can both purr and roar.

Tigers, along with most of the other big cats such as lions, jaguars, and leopards, are called the “roaring cats” and can only roar and not purr.

What sound do the tigers make?

Although we’ve just learned that tigers are one of the roaring cats, how often have you heard a tiger actually roar? Most likely never, and we’ll tell you why that is.

Four members of the big cat family have the ability to roar:

However, only one of them roars frequently: the lions.

While the tiger’s roar is just as powerful as the lions, they don’t use it while hunting. Tigers will only roar when they feel threatened, challenged, or afraid. In most cases, they are only seen roaring on other tigers.

Other than roaring, there are many other sounds that tigers commonly produce.

When they are happy or satisfied, they produce a chuff-like sound; this sound also indicates their friendliness. On the other hand, you can find them growling, snarling, or hissing when they feel aggressive or threatened.

Other big cats that cannot purr

Tigers are not the only cats that cannot purr!

Just like them, other felids are incapable of purring as well. All of these cats belong to the big cat family. Let’s take a look at them:

Known for their golden mane (found only in the males), lions are the second largest felid species globally, after the tigers. They have a rounded head, a deep-chested body, and a tuft at the end of their tail and are both apex and keystone predators.

Although lions are the most prominent roarers in their family, they can produce other sounds like low-pitched grunts, gentle moans, growls, and snarls.

The roar of a lion displays their power; they only roar to assert their dominance over the other lions.

Leopards are a vulnerable large cat species that have a wide distribution and can be found in sub-Saharan Africa, parts of Western and Central Asia, and European Russia.

They’re sexually dimorphic, with the males being larger and heavier than their female counterparts. The fur of leopards is soft and thick and tends to grow even longer in the winters to protect them from the harsh climate.

Leopards are known for producing a distance call that sounds somewhat like sawing wood. Apart from this sound, they can also produce other vocalizations such as hissing, grunting, mewing, and growling.

Jaguars are a near-threatened American felid species known for their distinctive tan-colored fur coat covered in dark rosettes. Being the largest cat species endemic to America, these felids are very well-endowed.

Although they’re similar to leopards in appearance, they have stockier limbs, a more-squared head, and a more robust built. Jaguars produce a large range of sounds like roaring, grunting, and mewing.

Big cats that are capable of purring

When we were talking about the roaring cats above, did you notice that a majority of the big cats were included in the list? And as we’ve already mentioned, cats can either roar or purr.

So, are there any big cats that have the ability to purr? We are glad you asked.

Three big cat species purr instead of roaring. Let’s take a quick look at these three:

Endemic to Africa and central Iran, Cheetahs are a big cat species known for being the fastest terrestrial animal in the world. They have a light body, long, thin legs, and a long tail, all of which contribute to their speed.

These felids have a flexible social structure and are known to produce many calls and sounds, such as churring, chirping, “nyam, nyam”, “ihn ihn,” and so on. Purring is also one of the sounds they produce to express their content.

Also referred to as “Mountain Lion” and “Catamount,” Cougars are large felids endemic to the Americas. Of all the New World Cats, cougars are the second-largest, after jaguars.

They are nocturnal hunters that use the ambush technique of predation to hunt. Ungulates like deer, elks, and moose, are their primary prey.

Although cougars cannot roar because of their solid hyoid, they produce a rare, high-pitched scream that could send chills down your bones. Only the females are known to produce this sound, while the males are mostly quiet.

Found in the mountain range of Central and South Asia, Snow Leopards are a vulnerable felid species that have been adapted to survive colder climates.

Although these cats cannot roar, they’re capable of producing a large number of sounds like purr, hiss, growl, meow, and chuff.

Why do tigers have stripes? The stripes of the tigers are a camouflage that enables them effective predation. Ungulates like deer, bison, and elks (their primary prey) have a poorer vision than we do, which is why they cannot spot a tiger among the tall grasses of forests. This gives these cats an upper hand on their prey.

This is a topic of much debate, especially since zookeepers think they’ve heard them, but not everyone is convinced. But we did the research and discovered that tigers can’t purr. It has been suggested that it is physically impossible for a tiger to purr because it lacks the appropriate musculature.

Well, we’ve come to the end of our article. Thank you again for reading and if you’re still feeling adventurous, check out some of the other surprising facts about tigers.

We hope you’ve enjoyed it and if so, kindly share it with others who may also be interested. Have a marvelous day!

Polar Bear vs Siberian Tiger Fight: Who Will Win?