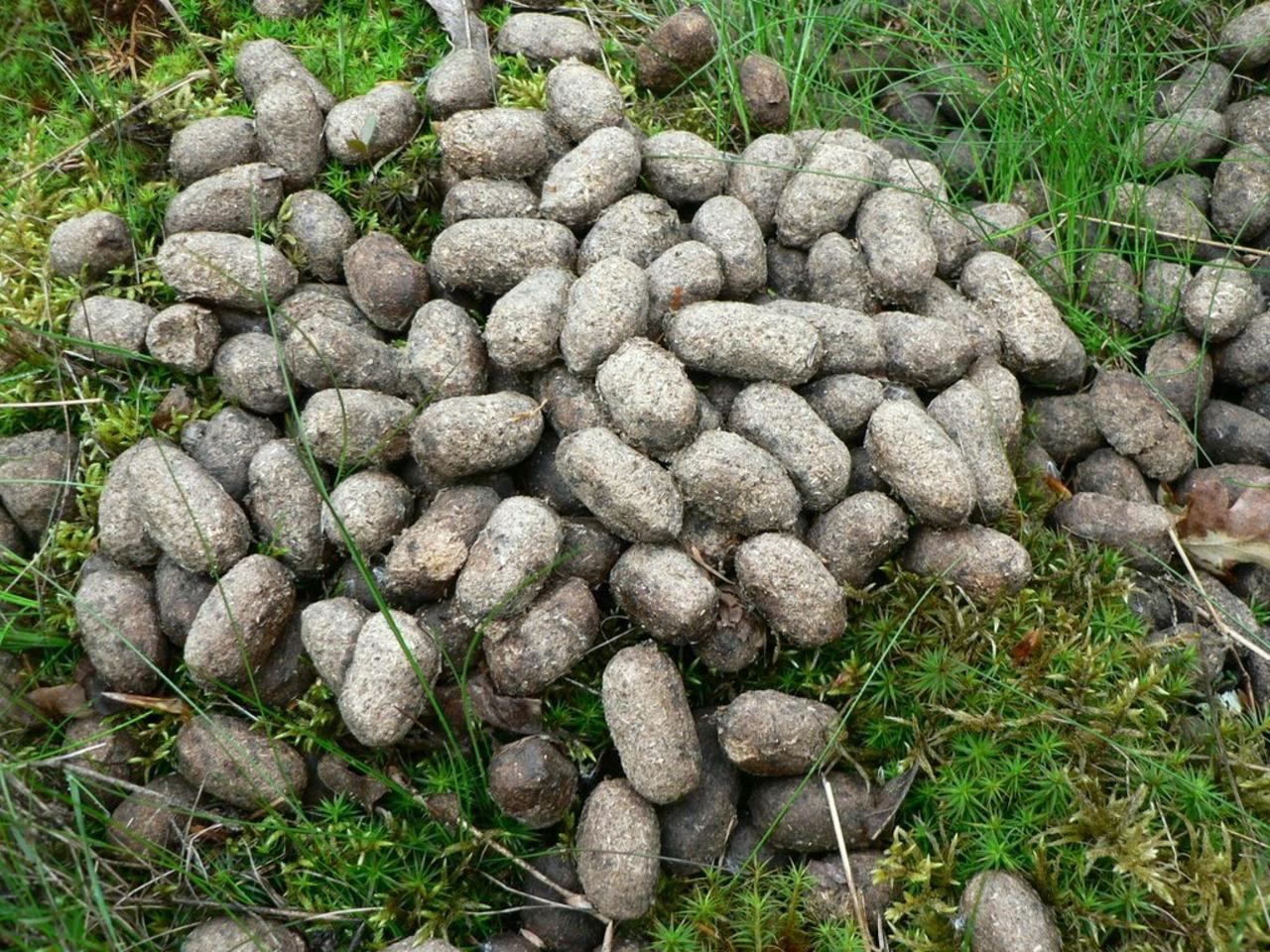 The deer group of mammals are ungulates with cloven hooves that belong to the Cervidae family.

Deer are notable for having antlers that are synonymous with the males. It is only the Chinese water deer, which don’t have antlers. Instead, they possess tusks which they use in fights or scouring for food.

The antlers grow and fall off annually. It is only the Reindeer species whose females also have antlers.

These bony structures are wrapped around skin commonly known as velvet. The skin is full of nerves, tissue, blood and has short hair. Once the antlers grow, the velvet is shed off by the deer.

There are conflicting details regarding just how many deer species there are. The family Cervidae is thought to have at least 43 species.

Are you aware that deer are natives in all continents except Australia and Antarctica? When it comes to diversity, deer are best known for it.

Deer vary in size, shape as well as appearance. There are extremely large deer and also tiny deer. The largest known deer is the Moose, which can weigh up to 1,800 pounds and can reach 2 meters (hoof to shoulder). On the other hand, the Pudu species is considered the smallest deer. It only gets to weigh around 20 pounds and is 14 inches in height.

An interesting fact about deer is that you will find them in various ecosystems – from the grasslands, mountainous regions, scrublands to the wetlands.

Deer are extremely social animals and will travel in herds, mostly led by a dominant male. They can also travel in sexes, with separate herds of females and males.

Deer are most active at dawn and dusk when there is little sunlight, hence they are equipped with a 310-degree vision. This is because their eyes are located on the sides of the head. During the daytime, the deer will spend time foraging.

Another interesting bit about the deer is that most are born with white spots which disappear as they grow. These spots act as camouflage which helps them blend with their surroundings.

You may have never come across a deer and are wondering how you can identify one?

Well, one of the easiest ways of identifying a deer is by its scat! Yes, you heard that right. Scat, poop, poo, feces!

All those are universal terms depicting the byproduct of a natural process found in all animals and humans alike – excretion.

Whereas fecal matter may be appalling to most of us, it is actually a mechanism for eradicating toxins from the body. This is vital for survival. Deer are not exempted from excretion!

So, how can you identify deer poop if you have never even seen a deer? Does deer poop resemble human poop?

Does it pose a threat to humans? Read on to find out what deer poop looks like as well as other vital details that deer poop can tell you. 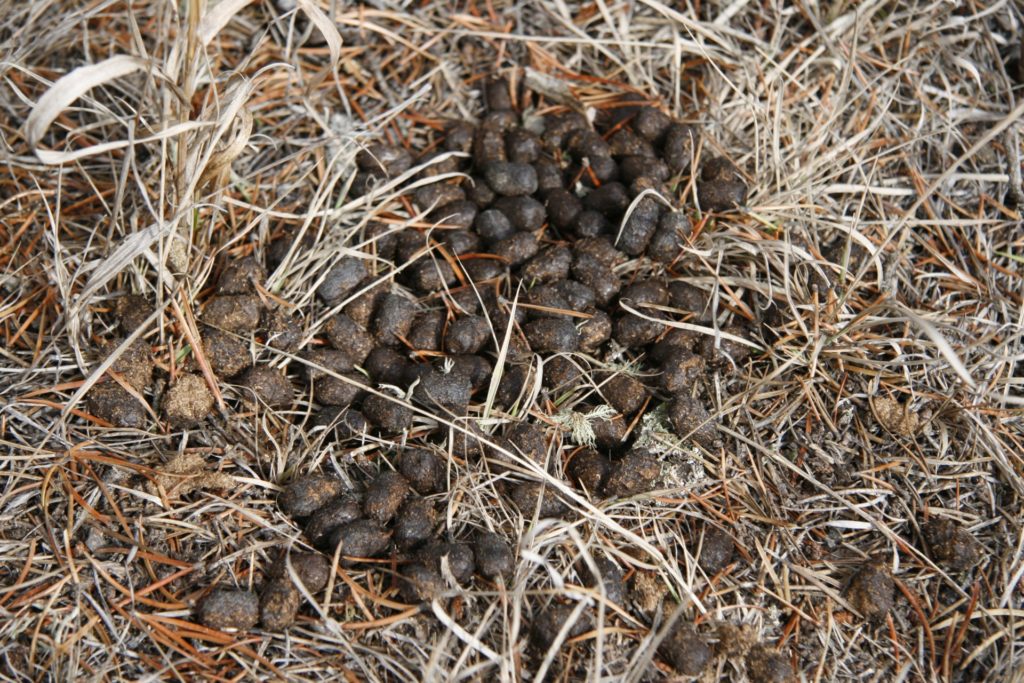 Deer poop is identifiable by various key features. These include texture, size, number of droppings, color and shape. Here is a brief description of each.

Deer droppings are notable for resembling bullets. The droppings are oval-shaped. One end is pointed and the other end is usually flat or slightly indented.

An outstanding feature of deer poop is its smooth texture. You will not see any visible remnants or particles of what the deer had consumed.

This is because of rumination. Deer belong to a group of animals called ruminants. Such animals have several stomachs where food is passed on from one to the other.

Ruminants will chew food quickly which will then be passed to the first stomach (rumen). The animal will then regurgitate the contents and chew them further before being passed to the other stomachs.

At the end of this process, the content is finely reduced to a smooth mass that is excreted.

Deer poop is relatively tiny. The poop clump together to form a cluster of pellets.

As for the number of pellets, a single deer can have a scat of up to 93 pellets. This may vary depending on the deer’s diet as well as how frequent the deer excretes within a day. Some can excrete as many as 13 times a day.

The color of deer scat is determined mostly by the type of forage eaten. However, the most prevalent deer poop colors include dark brown and black with a shiny appearance.

On other occasions, deer poop may appear green. This indicates some level of diarrhea and that digestion happened too fast, without the bile being broken down effectively.

Does Deer Poop Resemble Any Other Animal’s Poop?

If you are a hunter and find it hard to single out deer poop in the wild, the pellet-shaped deer poop should do the trick.

This is because animals such as wild rabbits, raccoons or squirrels have rounder poops. However, most poop will be in piles. Deer poop is also smaller compared to such animals.

Diet of a Deer

An important fact about the deer diet is that they love high-protein plants. Protein is vital in deer’s diet because of the antlers. Optimal antler growth depends on a rich diet of proteins and minerals.

In vicinities where humans live close by, deer will roam around and rummage through trash cans, landscapes, and gardens in search of vegetation and fruits. In farmed lands, deer will scour for corn, wheat, beans, oats, rye, and other plants in season.

This close contact with humans begs the question, “Is deer poop harmful to humans?”

Deer poop has been associated with traces of Escherichia coli (E. coli).

Whereas E. coli is found in the human gut as part of the gut flora, certain strains of this bacteria is notorious for causing urinary tract infections as well as chronic illnesses.

Such a case was witnessed in Oregon, the United States of America, where lab tests were done on deer poop indicated the presence of harmful E.coli. This led to several cases of infections and death.

As such, you should always exercise caution whenever you come across any fecal matter across your path.

In case you find some poop lying around your compound, use heavy-duty gloves and a shovel to scoop the poop. Dispose of by burying the poop or putting in a disposable bag.

What Does Deer Poop Indicate? 5 Clues Deer Droppings Can Tell You

So, you have stumbled upon a cluster of deer poop. Or better yet, you are an avid deer hunter and have seen a pile of pellet-shaped poop.

But, what does this really mean? What can you learn from deer scat?

As we saw earlier, there are extremely big species of deer. The bigger the deer, the larger the scat size. Also, mature deer are likely to dump larger poop compared to baby deer or fawns. The droppings for a mature male deer (buck) is also larger than that of a female (doe).

Shriveled and sunken poop means that the deer passed by the area a few days prior and have probably moved to a different location. Most animals are fond of creating a latrine (a pooping site). They will identify a shared spot in which they will poop continuously until they move on to a different location. As a hunter, this comes in handy in identifying the location of your target game.

This is a clear indication that the deer is nearby or they have recently dumped. Shiny, wet droppings indicate freshness. This could mean that the deer live close by, hence such a location is ideal for hunting them.

Deer Scat in an Open Field

This indicates a favorable feeding spot for the deer. It can be challenging trying to hunt deer in an open field as they will camouflage. However, it could also mean that they love such a space, hence you can set traps before feeding time.

Deer will normally look for deep, heavy cover as a bedding site or resting site. When you encounter deer poop in such a location, you will not fail to spot a herd of deer nearby.

How Can You Tackle Deer Menace?

Deer are naturally peaceful animals and are actually timid around humans.

Nevertheless, it is common to find them within homesteads, due to human-animal encroachment.

If you find them pesky, it is always advisable to liaise with the local pest control services. There are plenty of readily available deer repellant mechanisms.

Another effective way is to erect electric fences around the homestead to keep the deer away.

5 Types Of Deer In Texas