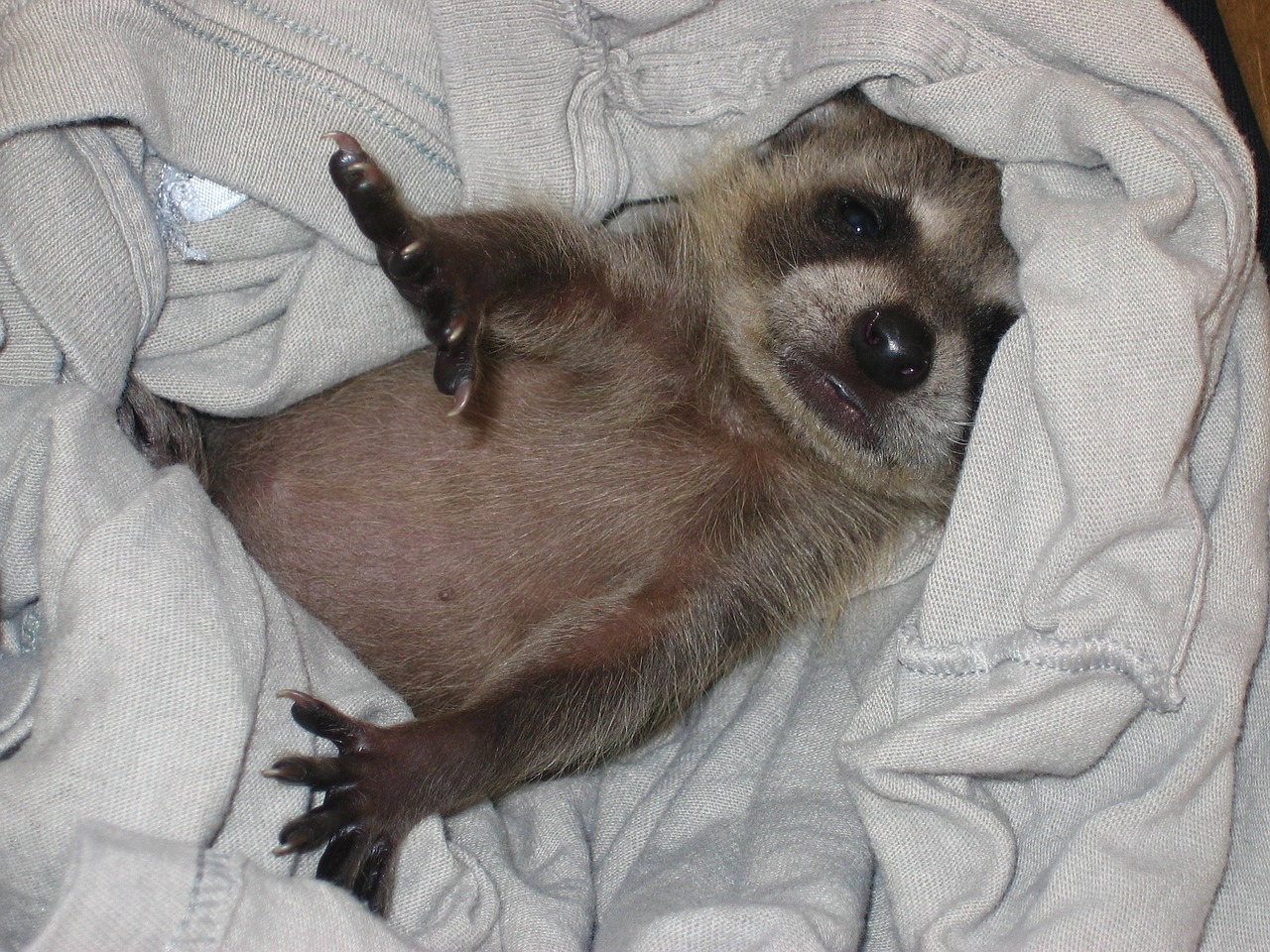 Contrary to their cute looks owing to their furry appearance, a beautiful lining of black fur around its eyes and large bushy tails, raccoons are the most destructive among the commonly found urban pests.

But most people find it hard to shoo away raccoons because of their overloaded cuteness. If even an adult appears cute, ever thought how cute might their babies would be? Trust me, folks, baby raccoons are irresistibly cute that you would want one as a pet!

But there lies the trouble, as said earlier, baby raccoons aren’t animals that you would want to domesticate because of their innate wild instructs.

If you didn’t know, raccoons, including their babies, are common carriers of rabies, roundworms, and leptospirosis causing bacteria.

Yeah, as I said, most people find these facts hard to believe, owing to their cute looks. If you are someone living in areas where raccoons are common, there are some essential things about them that you ought to know.

This is why we have compiled a list of facts about baby raccoons that you ought to know, especially if you are living in areas with a large population of raccoons. We have also included some cute photos and videos of baby raccoons that will make you go aww!

A baby raccoon is called a Kit or a Cub 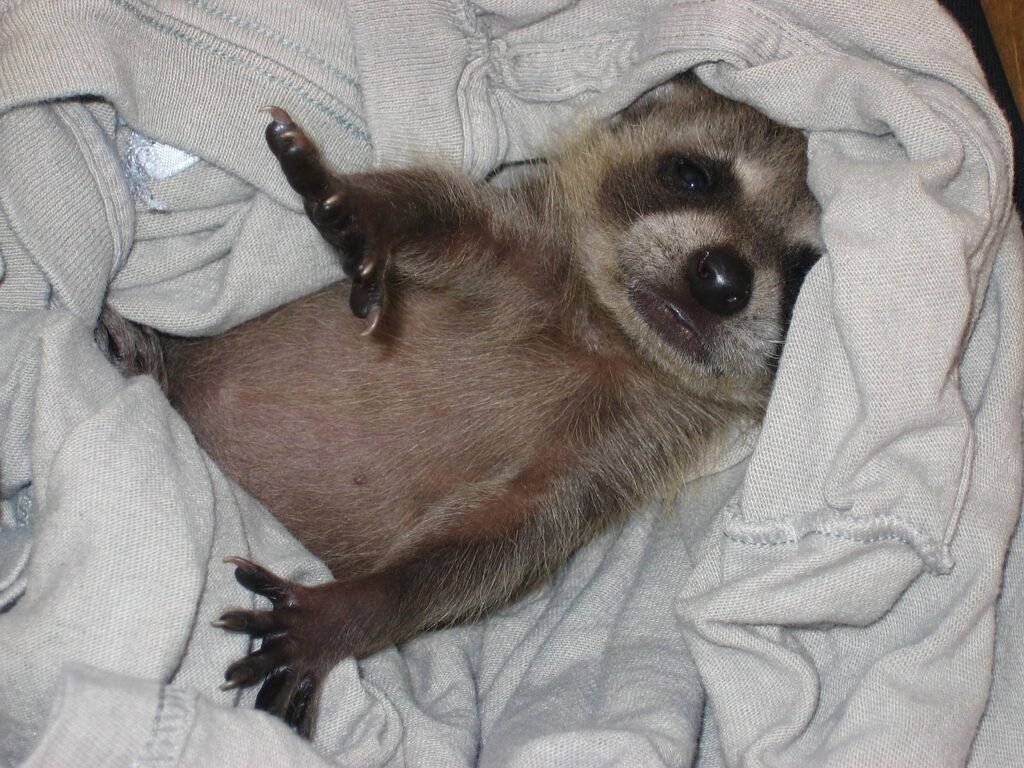 An adult female raccoon has a gestation period of around 70 days, and she usually gives birth to 6 or 7 cubs in one litter.

These baby raccoons are called kits or cubs, and a group of cubs with their mother are called a nursery. Compared to the other animals in the wild, it takes a raccoon almost 8 to 12 months to be fully independent.

A baby raccoon for the first two months of their life are helpless and are depended on their mother for survival. These babies are weaned at 7 to 16 weeks. By the end of 12 weeks, the cubs slowly start to explore the world around them, but they wouldn’t leave their mother’s vicinity.

Raccoon population has sky-rocketed over the past years

This is because raccoons are highly adaptive animals that can accustom themselves to the new surroundings faster than other wild animals. Though they are wild animals, they can adapt themselves to urban or semi-urban human settlements easily. It is for this reason raccoons are considered to be an invasive pest.

In their natural habitat, raccoons eat birds, insects, fruits, nuts, and seeds, and when in areas with human settlements, they can sneak into your kitchen, eat your pet’s food or scavenge from the garbage bins.

In most cases, raccoons who have lost their natural habitat tends to make their dens close to human settlements. They spend their morning sleeping in the dens and come out foraging at night. In other cases, a raccoon can settle down in attics too.

A baby raccoon relies more on their sense of touch 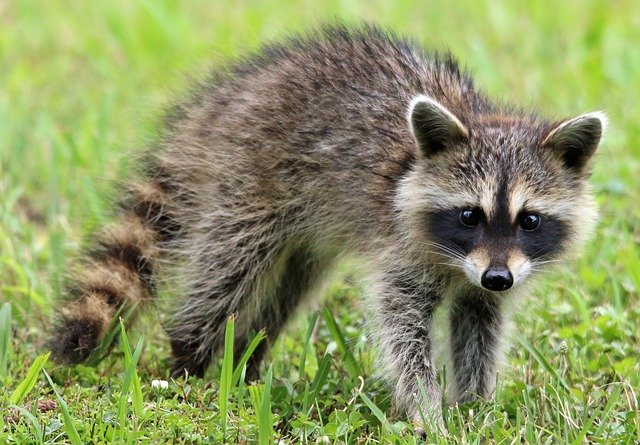 Not just the baby raccoons, raccoons, in general, relies more on their sense of touch than smell, sight, or sound to hunt.

This is, in fact, an evolutionary advantage they have acquired over the years owing to their nocturnal nature. Having a large number of sensory receptors on their hands helps them differentiate objects without seeing them when they go foraging in the night.

These baby raccoons can be seen doing something that resembles as if the animal is washing their food. This process is called dousing, and they do this to heighten their sense of touch. Making their hands wet with water helps them get more sensory information!

A baby raccoon can carry many deadly diseases causing viruses

What makes this deadlier is the fact that a raccoon can carry these viruses while being unaffected. Raccoon babies are not born with this virus, rather the virus is transmitted from their mother while they are being groomed.

Among the three viruses a baby raccoon might carry, the deadliest one would be the rabies virus as it is a zoonotic inoculated virus.

As said earlier, a baby raccoon is not born with the virus in its body, nor is it affected. Even if the mother raccoon is infected with rabies and it infects the brain, it would still not cross the placental barrier, which means that the babies get affected when the mother grooms them.

Once a raccoon is affected with rabies after infecting its brain, the virus reaches the salivary gland and multiplies there.

Only at this point shall the raccoon start showing symptoms such as aggressiveness, anorexia, eye and nasal discharge, labored breathing, and so on. The virus is then transmitted to other animals or humans through this saliva.

It is for these reasons why raccoons are considered to be dangerous pests contrary to their cute looks.

Can you have a baby raccoon as a pet? 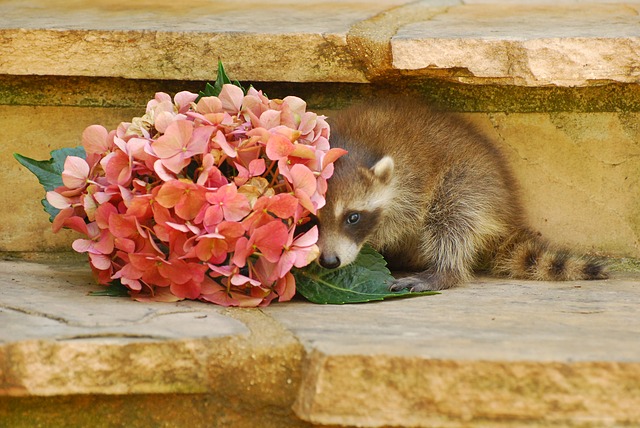 Yeah, you can have a baby raccoon as a pet but only at your own risk. As said in the previous sections, baby raccoons are irresistibly cute and are fun to watch.

If you are planning to adopt a baby raccoon, we have a list of pet raccoon names from which you can choose from.

They are tiny inquisitive animals who are curious about everything around, making them an ideal stress buster. All these being said, raccoons are wild animals, and they have an innate wild instinct, which can be pretty tricky to handle in a domestic environment.

Among the many reasons why we don’t advise keeping a baby raccoon as a pet is because most people wouldn’t have the knowledge, equipment, or training to take care of such a wild animal.

Though they look cute and seemingly harmless, they are still wild animals with a wild instinct, and they can’t handle a life within a domestic property of a cage.

Even after all these, if you still insist on keeping one as a pet, you need to be aware of your local laws. In most areas, it is illegal to keep a raccoon as a pet.

How can you tell how old a baby raccoon is? 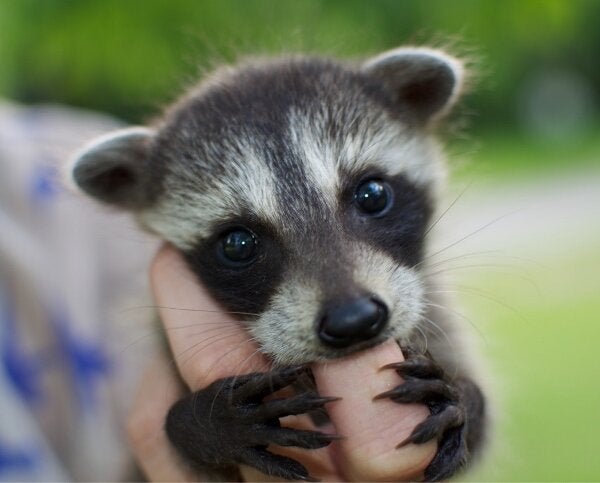 The best way to determine the age of a raccoon is by its weight.

Can baby raccoons survive without their mother?

No, a baby raccoon cannot survive without their mother because raccoon babies are dependent on their mothers for survival until they are at least two months.

In most cases, the baby raccoons are found to be helpless until they are two months old. It is important to note that in most cases, an adult raccoon may leave the baby to explore its surroundings and these babies being curious to explore their surroundings get lost, but don’t worry, their mommy will come in search of them.

A baby raccoon that has lost its mother cannot survive in the wild for too long. They might succumb to the predators that are looking for a snack or to hypothermia, and in worst cases, they might even die of starvation.

Seeing an animal in distress can be harrowing, and you must help them survive. But you need to be extremely careful when handling a baby raccoon.

What should you do if I find a baby raccoon? 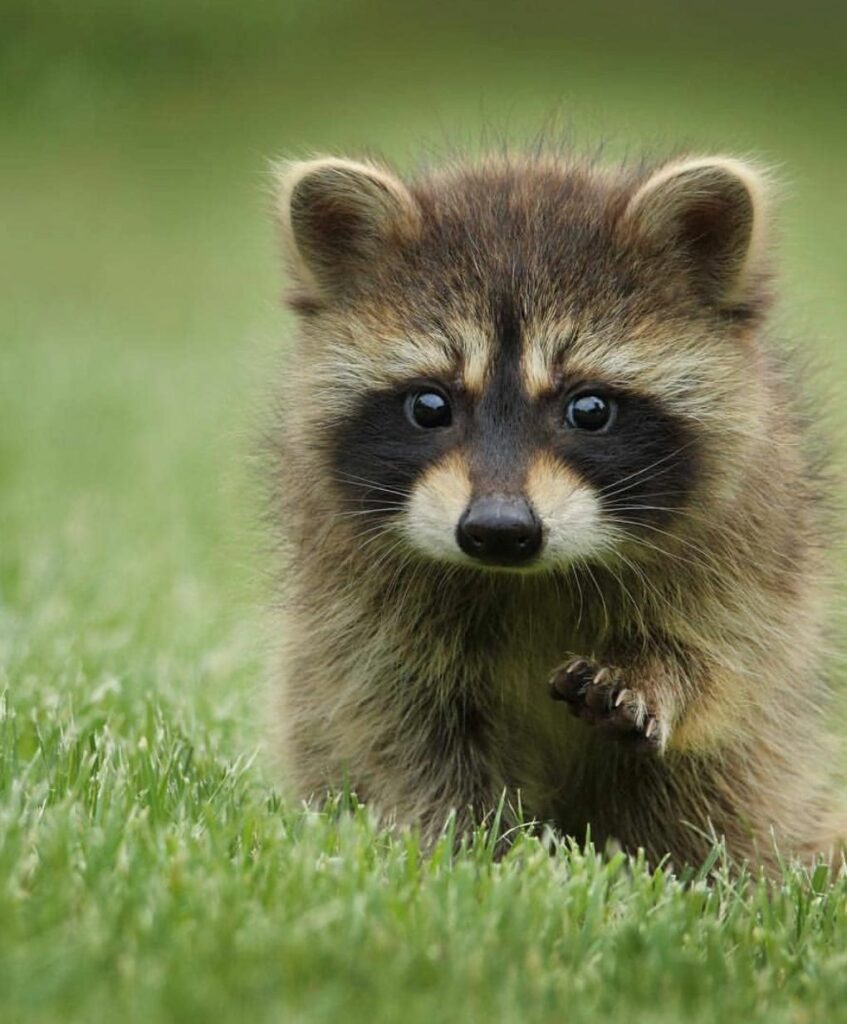 The first thing to do if you ever happen to see a baby raccoon out there alone is not to touch it or go near them. In most cases, the babies will wander out of their den because they are curious little animals, and they are always ready to explore their surroundings.

Most of the time, mothers don’t let their babies go out of their vicinity, and even if some go, the mothers will come in search of them following their scent. It has been found that the mothers don’t take care of the babies is she gets the scent of a human being on her baby.

When it comes to a baby raccoon, their best chance of survival is with their mom. If you were to see a baby raccoon wandering all alone, you need to wait for some time and see whether the mother comes in search of the baby.

That being said, if you were to see baby raccoons besides a dead adult raccoon or if the baby is injured or shivering, you need to step in and help them.

In such cases, you should live the babies up using a thick towel and not using bare hands because the seemingly not so dangerous babies can be carriers of deadly disease-causing viruses, including rabies.

It is not easy to take care of a baby raccoon as they need extreme care, and only a trained caregiver can properly take care of them. The best thing to do is to take the babies to an animal care center.

Can you pick up a baby raccoon? 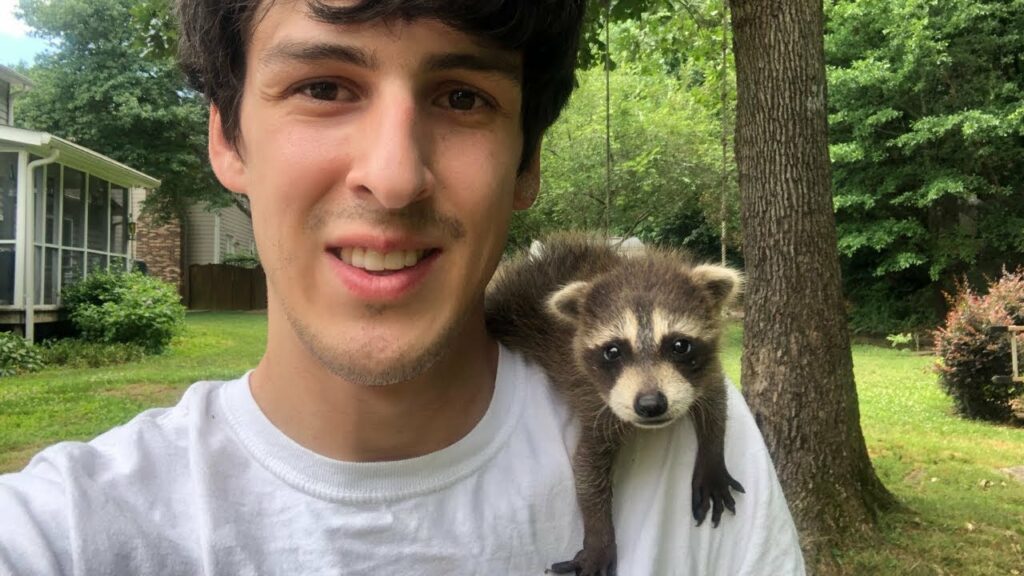 It is quite common to see people wanting to pet a baby raccoon that is away from its den because baby raccoons are irresistibly cute. Apart from being attractive, they are extremely curious, and they would always come towards you.

But in any of these cases, you shouldn’t pick up or touch a baby raccoon with bare hands because of three reasons.

1. In most cases, a baby raccoon that may seem to be roaming around all alone might be in its mother’s vicinity. The babies being curious little beings would come towards you the moment you decide to touch them; the mother raccoon may jump into the scene with the other adults in the groups. And you don’t want that to happen.

2. Mother raccoons that sense the smell of humans on their babies tend to abandon them. For a baby raccoon, their best chance of survival is with their mother.

3. Baby raccoons that are seemingly friendly and of no threats might be carriers of many deadly diseases causing viruses. If you were to lift a baby raccoon, always use a thick towel and do not use your bare hands.

Yes, most baby raccoons are found to be carriers of deadly disease-causing viruses such as the rabies virus, feline distemper virus, and the canine distemper virus. What makes it even more dangerous is the fact that a baby raccoon carrying these viruses may not be affected and hence may not show any symptoms. 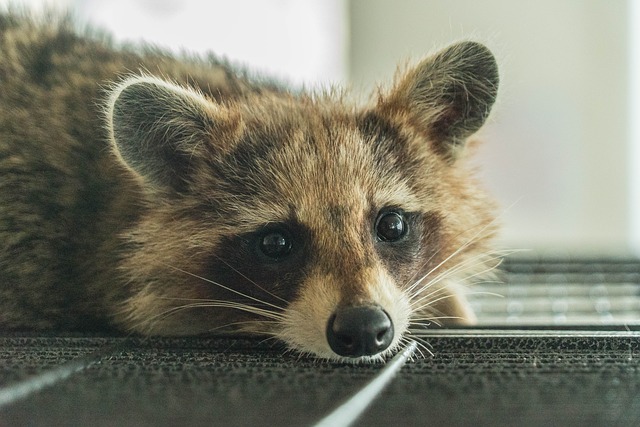 Baby raccoons are not an invasive or destructive pet like adults. But they are still considered to be dangerous because of the deadly viruses they might be carrying.

What do baby raccoons eat?

The diet of a baby raccoon in the wild greatly differs from that of those in captivity. In the wild, baby raccoons survive only on their mothers’ milk until they are at least 3-4 weeks old.

Only after four weeks will the mother slowly begin to introduce solid food items such as berries and small insects.

In captivity, for the first 3-5 weeks, they are given milk that has high-fat content in it, and they are fed up to 5 times a day.

Only after the baby has gained enough weight and is at least seven weeks old fruits and other solid foods are introduced to the baby.