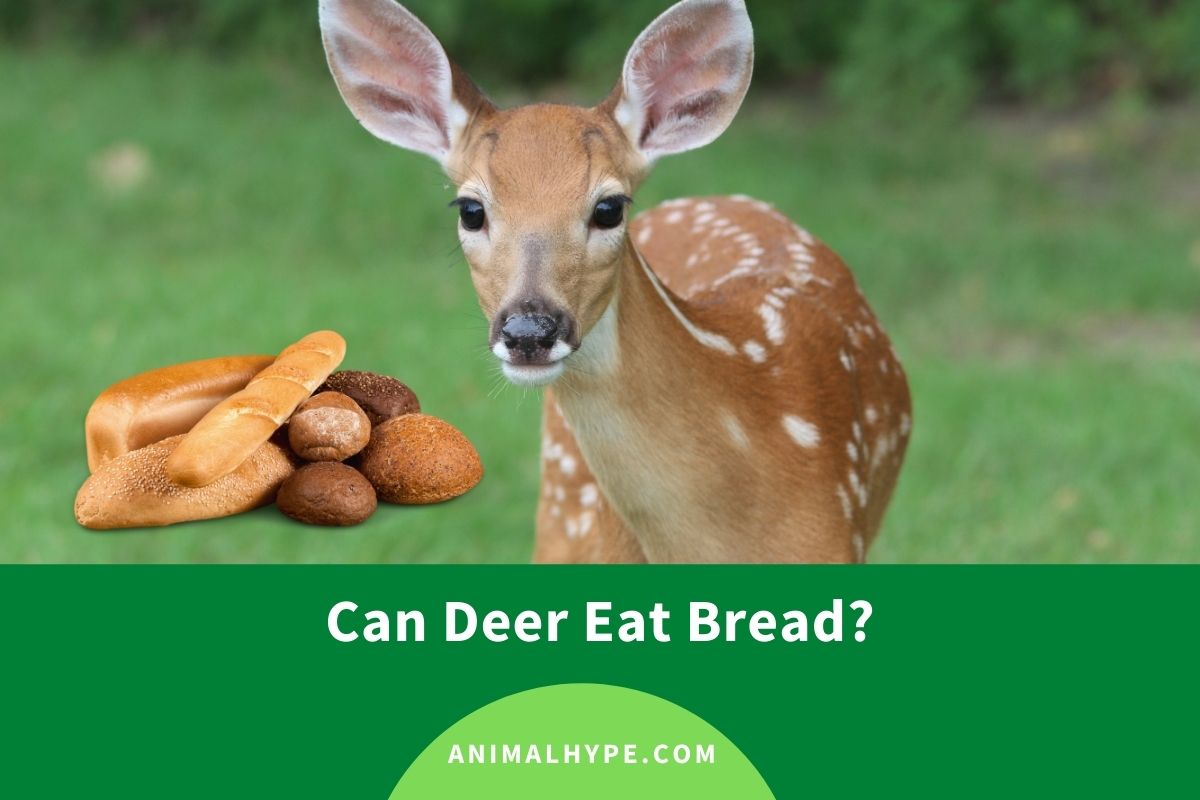 Although Deer are wild animals, they have a calm temperament and usually don’t harm humans, which is why having them in your backyard might not be such a repulsive idea. There is something serene about looking at these animals grazing that makes many people feel tranquil.

Can deer eat bread? Yes, deer can eat bread and are quite fond of it. However, since it is not a part of their natural diet and has a low nutritional value for them, you should feed them bread in moderation. Eating a large quantity of bread can also cause diseases like Lactic Acidosis in these ruminants.

Do you wonder whether Deer like eating bread? Is it safe to feed them bread? Or are you confused between feeding them white or brown bread? Whatever your queries are, they will be resolved in this article.

What do Deer eat in the wild?

Deer are herbivore browsers that primarily feed on trees, forbs, shrubs, grass, and sedges. Although they are ruminants, their digestive system is small and simple in comparison with that of the other ruminants.

This is why they usually choose plant materials that are easy to digest and require minimal fermentation, such as fresh grass, soft twigs, young leaves, and shoots. Occasionally, they can also feed on fruits and berries.

When it comes to their diet, deer aren’t the smartest creatures. These ruminants do not have a great sense of what is and what is not good for them. And while they might be pickier about what they eat during summers, in winters, when they’re already facing a food crisis, they will eat whatever they are fed, including bread.

Is it a good idea to feed Deer bread?

We have already established that bread is not a part of a Deer’s natural diet. Moreover, it can also be added to the category of processed foods that are unfit for wild animals like Deer.

However, if you feed bread to Deer in a small quantity, it is unlikely to harm them. And while you can’t control how much bread the Deer eat, especially if more than one of these animals have been coming to your yard, you can certainly limit the quantity that you put out for them.

White bread or Brown bread: which one is better for Deer?

If you had to pick between white or brown bread to feed a deer, which one would you pick, and why? Don’t worry if you don’t have an answer, we’ll help you out with it.

Let’s begin by talking about the basic difference between them. Both the white and brown bread are made of wheat grain. However, wheat grain has three parts: nutritious germs, fibrous bran, and carbohydrates-filled endosperm.

In the manufacturing process of the white bread, apart from the endosperm, the other two nutritious parts are removed. On the other hand, all three of them are included while preparing brown bread.

Let’s take a look at the nutritional value of both white and brown bread:

As indicated in the chart drawn above, it is clear that out of the two varieties of bread, brown bread is a comparatively healthier option for the Deer.

Before you begin to feed bread to the Deer, you must be fully aware of all possible outcomes of it. We’ve mentioned before that eating too many bread slices can be fatal to the Deer, but how exactly does it harm them? Let’s find out:

Also known as “Acute Carbohydrate Engorgement” and “Grain Overload”, Lactic Acidosis is a common disease among all ruminants, including Deer, which is the consequence of eating large quantities of fermented starch or cereal grains.

Although in most cases, this disease is often caused by the consumption of wheat, barley, and corn, many elks and Deer also get it by eating carrots, apples, bread, etc.

Some of the common Grain Overload symptoms in the ruminants are diarrhea, dehydration, and an enlarged rumen. The affected animals can also have difficulty in rising or standing for too long. In some cases, this disease can also lead to sudden death.

While we have already gathered that bread won’t harm the Deer as long as it is fed to them moderately, is it equally safe for their younger ones?

The answer to this question is not that simple. While the baby deer have a fragile digestive system and, therefore, need a more careful diet, fawns are quite sturdy and adapt to the diet of their adults relatively early. However, since bread is not a part of the Deer’s natural diet, it could adversely affect the fawns.

As a cautionary measure, you should avoid feeding them bread altogether and stick to their natural diet.

Introducing bread to a Deer’s diet

Most of the animals, both domestic as well as wild, have no trouble with switching their diet. However, for the ruminants like Deer, it is not so easy.

They are dependent on a variety of microorganisms and bacteria to break down their food for them. Therefore, when these animals change their diet, they need different bacteria and microorganisms to help them process the food.

Thus, when you’re adding bread to their diet, you should do so gradually. It will take them about 10-14 days to adjust to eating bread.

Feeding Deer in your backyard: things to remember

If you have been wondering about Deer eating bread, you are probably trying to attract these elegant creatures to your backyard. However, simply knowing what they like to eat is not enough. Below, we’re listing some of the things you need to remember while trying to get them into your backyard:

Do Deer eat sweet potatoes? Yes. Deer are fond of sweet potatoes, which is why it is often used a bait to invite them to people’s backyards.

Will Deer eat lavender plants? No. Deer do not like feeding on fragrant plants, for their smell is repulsive to them. If you want to plant something in your garden to discourage Deer, lavender is a great choice. Apart from lavender, the plants of the mint family also work well against them.

At what time of the day do Deer mostly eat? Deer usually eat in the middle of the night or early morning. However, when they have a scarcity of food during winters, you can find them looking for it all day long.

Let’s reconsider everything we’ve learned above: Deer can eat bread safely as long as it is fed to them in moderation. However, if they eat too many bread slices, it might take a toll on their digestive system. Lactic Acidosis is one of the common diseases in ruminants that can be caused due to over-consumption of bread.

5 Types Of Deer In Texas

What Does Deer Poop Look Like? Deer Droppings Identification