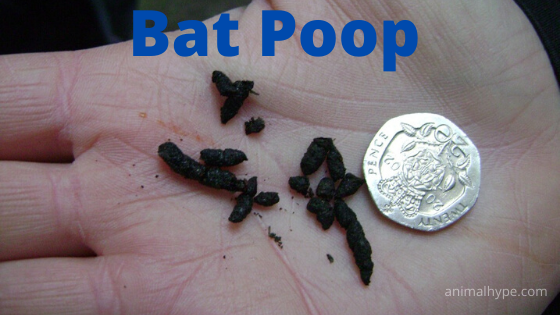 Bats are the only mammals that can fly and they have always been a matter of fascination. With more than 1300 species of different bats, they are the second-largest group of mammals on this planet.

Though often portrayed in folklore and mythologies as the companion or a sign of evil, bats are harmless mammals, if left alone. Being the second-largest group of mammals, they play an important role in balancing nature in many aspects that are beyond the scope of this article.

Owing to their looks bats are feared by most people but little do they know that bats are highly beneficial to humans.

Throughout the ages, droppings from bats have been used as an organic fertilizer in many parts of the world. Bat’s poop is found to have a higher concentration of nitrogen, potassium, and phosphorus which are highly beneficial for plants.

With the arrival of chemical fertilizers, the demand for bat droppings decreased rapidly. But these days when the demand for organic products is at an all-time high, bat poop is beginning to gain its lost popularity.

A bat’s poop is indeed a double-edged sword. While it is rich in nutrients making it an ideal fertilizer, it can have a severe impact on the health of human beings.

Bats, in general, are found to be carriers of many deadly viruses such as the Nipah virus, SARS-Corona virus and many more.

Owing to these reasons, bat poop needs to be identified and properly taken care of. But the problem lies in identifying a bat’s poop correctly. Don’t worry we have you covered! 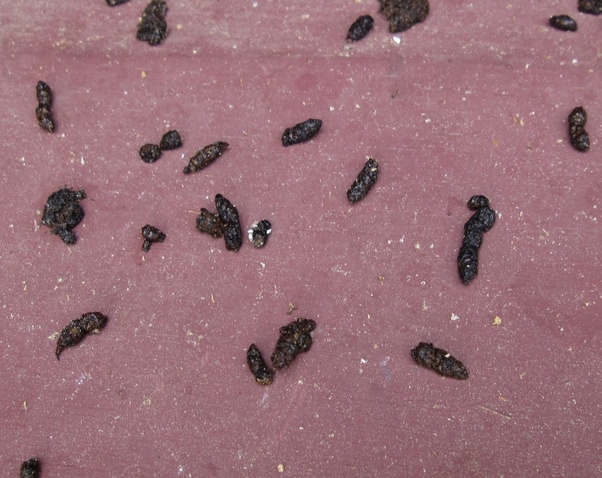 A bat poop looks very similar to that of a rat’s poop in color and appearance. Both their droppings are black and have almost similar size and structure.

But if you have a closer look, you can see that a bat’s poop is, little longer than a rat’s poop and also the former has blunt ends whereas, the latter has at least one end pointed.

Bat’s feces is not soft neither does it have a putty texture. The poop easily breaks and crumble irrespective of how old it is. All these being said, these aren’t striking differences that one can use to identify bat’s poop.

The best way to identify a bat’s poop is to break it down into small pieces. Now if you have a closer look, you can see tiny shiny particles in their poop.

These shiny particles in a bat poop are the undigested wings and exoskeletons of the insects the bat has eaten. Irrespective of how old or fresh the poop is, it will have the presence of shiny particles in it, if it is a bat’s poop.

Why does bat poop glitter? 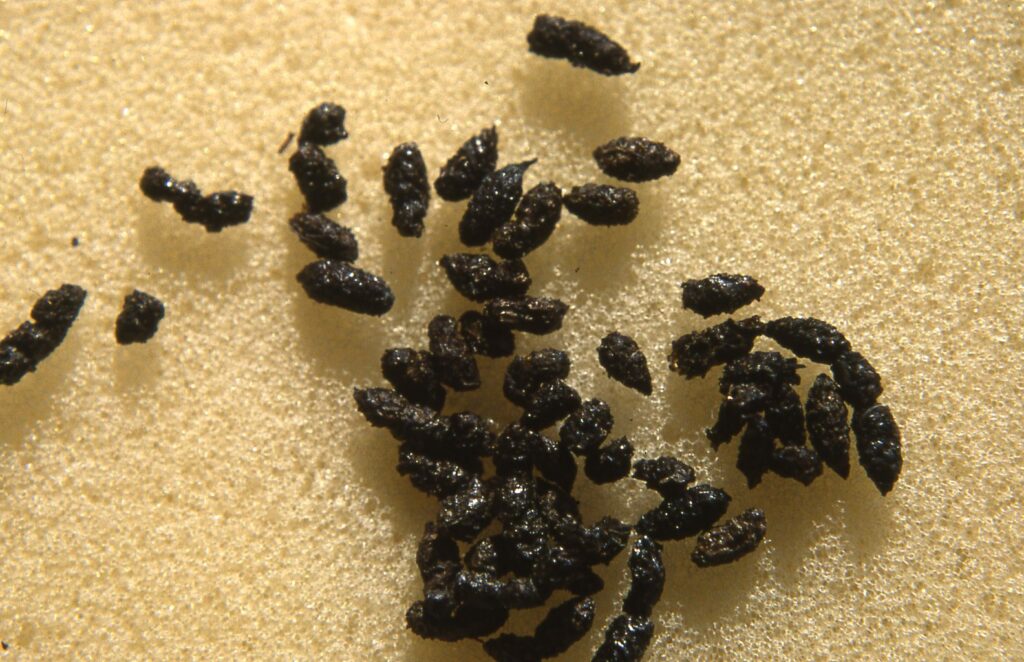 As said in the previous section, the easiest way to identify bat scat is to break the poop into small pieces and look for the tiny glittering particles.

If you have a look at the diet of a bat, small flying insects account for a major portion of a bat’s diet. In recent researches conducted on the dietary pattern of a bat, it was found out that some species of bats can eat insects and bugs accounting up to 2/3rd of their body weight. That’s quite a lot of insects, isn’t it?

Though these insects are rich in proteins, bats cannot digest most parts of the insect properly. For instance, the chitinous exoskeleton (the hard outer covering) cannot be digested by a bat properly. Chitin is chemically similar to the cellulose found in plants which the bats cannot digest.

This hard exoskeleton is broken down into small pieces inside the bat’s mouth and they pass through the gut unchanged. The bat excretes these pieces along with the poop.

It is these small pieces of undigested chitin in the poop that gives it a shiny appearance.

Can bat poop be white? 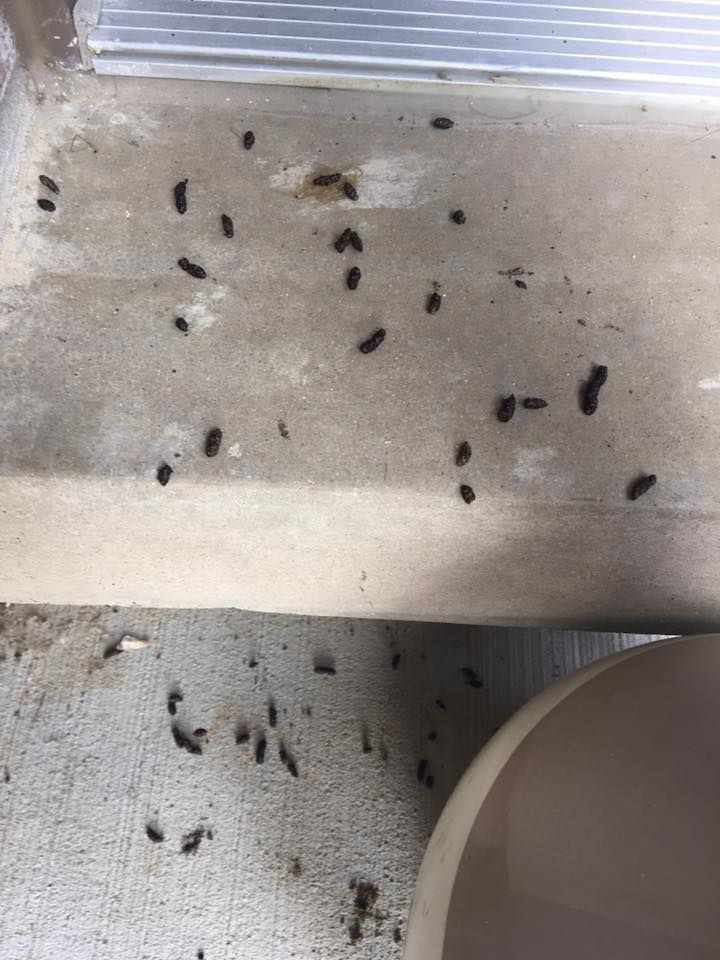 No, bat poop cannot be white and it will always be black. Most people ask this question because bats fly, they are considered to be birds and a bird’s poop is always white.

A bird’s poop is white because of the high uric acid content in the bird poop. But, just because bats fly doesn’t mean that they are birds. Bats are mammals and the only mammals with the ability to fly.

In some cases, it is quite common to see bat poop is confused with the poop of reptiles. The poop of commonly found reptiles inside houses is very similar in appearance to that of the bat poop except that they have white tips.

This explains why some say that bat poop is white.

How to identify bat droppings?

A bat’s poop is similar in appearance to that of rats and commonly found reptiles inside houses. They are almost of the same color and size that there are chances for improper identification.

It is imperative that you specifically look for some distinguishing factors such as size and shiny appearance. A bat’s poop is generally half an inch long, around 2cm thick, has blunt ends, rough texture, and breaks easily.

The best way to go about identifying a bat’s poop is to break it down into smaller pieces using a stick. And look for the shiny chitinous particles in the poop because the glittering appearance caused by chitin is unique to a bat’s poop. So that is the first indication for a bat’s poop.

Similarly, bat poop looks more like a seed of almost the same size. As said in the previous sections, irrespective of how old or fresh the poop is it will crumble easily. This can be another way to identify a bat’s poop.

Now comes the easiest part, unlike rats or lizards’ bats leave their droppings in a pile. If the bats are nesting in your attic, considering the rate at which they reproduce and their faster breeding cycles they can convert your attic into a bat toilet within a short time.

Can bat poop be used as a fertilizer? 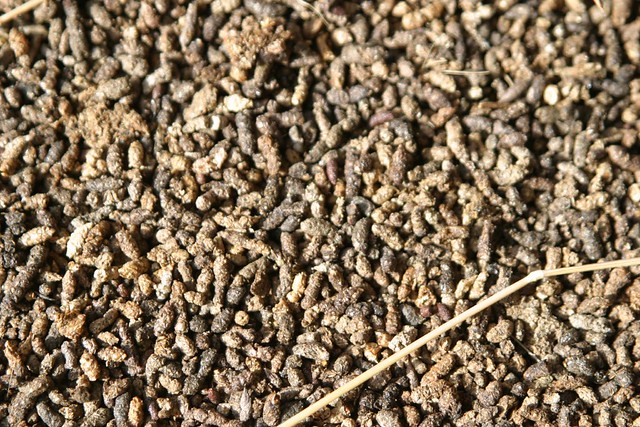 Bat poop or commonly known as bat guano was a highly sought for fertilizer until the chemical fertilizers took over the market. At one point in time, one could earn money by selling bat poop, can you believe that?

Bat guano has been found to have a high concentration of Carbon, Nitrogen, Sulphur, and Phosphorus that are highly required nutrients for plants.

This is especially in the case of insectivorous bats that has a high concentration of chitin in their droppings. What makes the bat guano an ideal fertilizer is not only because of its nutrient contents but for its ability to decay down fast.

Due to the presence of bacteria and fungi, the bat droppings decays down faster and loses their organic matter fast. Because of these properties, bat droppings are ideal for compost activation and to speed up the process of decomposition.

Owing to these reasons bat poop can be used as a soil conditioner, to improve the soil texture and fertilizer for domestic plants and lawns.

Apart from these, bat poop has an innate fungicidal property and hence it can be used to control the nematodes in the soil. Similarly, spraying dried-up bat dropping mixed with water on the leaves can be an ideal antifungal agent. 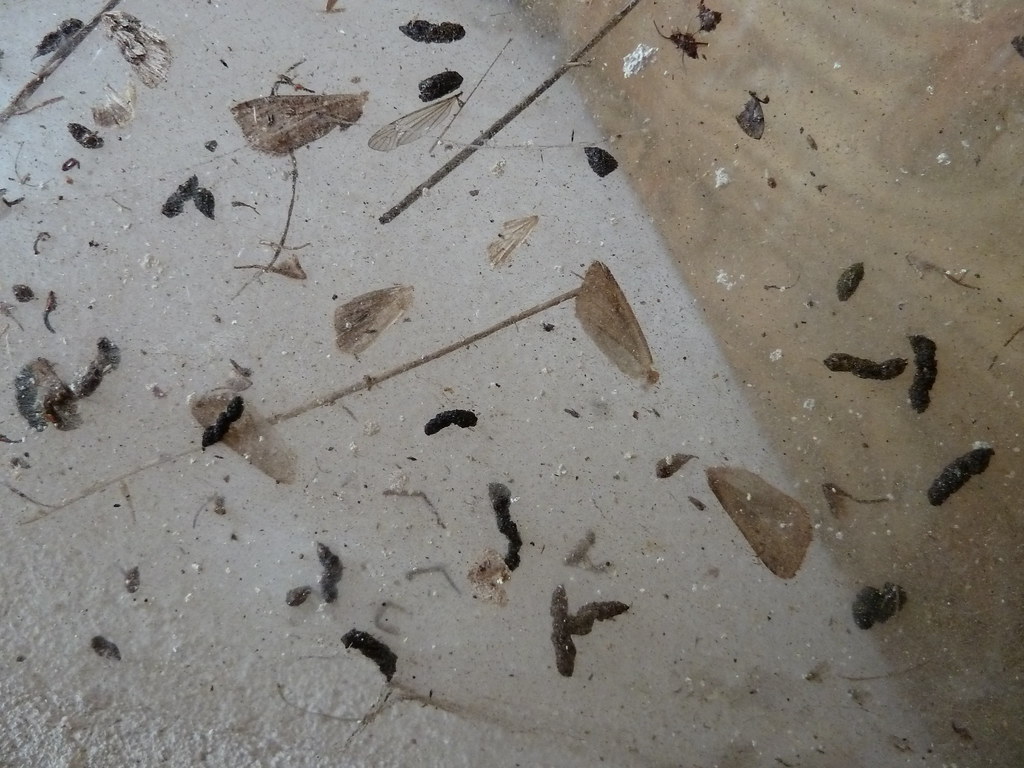 In this section, we will have a look at the various benefits of bat poop in detail.

As a soil conditioning agent

Bat poop has been found to have a high concentration of fungi that can positively impact the texture of the soil in your garden. When properly mixed with the soil apart from enriching its nutrient content, bat poop can also enhance the water draining capability of the soil.

The microbes and fungi in the bat poop have been found to have good bioremediation capabilities. When properly used as a fertilizer, these microbes can remove any toxicity in the soil and plants.

Apart from its bioremediation capability, it can also increase the water-retaining capacity of the soil by loosening the soil and increasing the space between soil particles.

Bat poop is an ideal activator in composts. Similarly, the bacteria and fungi present in the bat poop can accelerate the breaking down of other organic matter present in the soil providing better nutrition to the plants.

All these being said, it is important to understand that though bat poop is highly beneficial for plants, it is dangerous to human beings. Bats have been found responsible for transmitting many deadly zoonotic viruses to human beings.

Bats, in general, are carriers of the Nipah virus, coronavirus, SARS virus, and many other disease-causing pathogens that can be fatal to human beings. This is why you need to be extremely careful while cleaning bat poop or while using them as fertilizers.

Though bats are nocturnal animals and try to stay away from human contact as much as possible they are still dangerous. Bats are the major carriers of many deadly zoonotic diseases including the SARS virus, Nipah virus, and many more.

The chances of getting attacked or bitten by a bat are negligible and the next chance of contracting the disease from a bat is through consuming food or water infected by a bat.

One such deadly disease caused by the bats is histoplasmosis. It is a lung infection caused by the Histoplasma capsulatum fungal spores that are mainly found in the bat poop.

Humans contract this disease by inhaling the spores and once infected it can infect the lungs and then the other areas too. Histoplasmosis can be deadly to people with a weak immune system.

Owing to these reasons, the general public is never advised to handle the bats because extreme care has to be given while handling bats.

All you need is a drop of its saliva or a bite to get infected. This is the same while cleaning a bat’s dropping. In the coming section let us have a look at how to safely remove a bat’s poop.

How to safely remove bat poop?

Bats are dangerous animals and it is always advised to seek professional help to remove them or clean their poop from your attic or compound. Now if you still insist on doing it by yourself follow these steps to safely remove a bat’s poop.

We would always recommend you to hire a professional to clean large quantities of bat poop. In most cases, it would be difficult to access such places, and cleaning the poop alone won’t do the job.

You would need specialized tools and chemicals to clean and disinfect the entire surface.

The important thing to consider while cleaning large quantities of poop is to dispose of the poop safely without risking chances of soil or water contamination. This is something only a professional can handle!