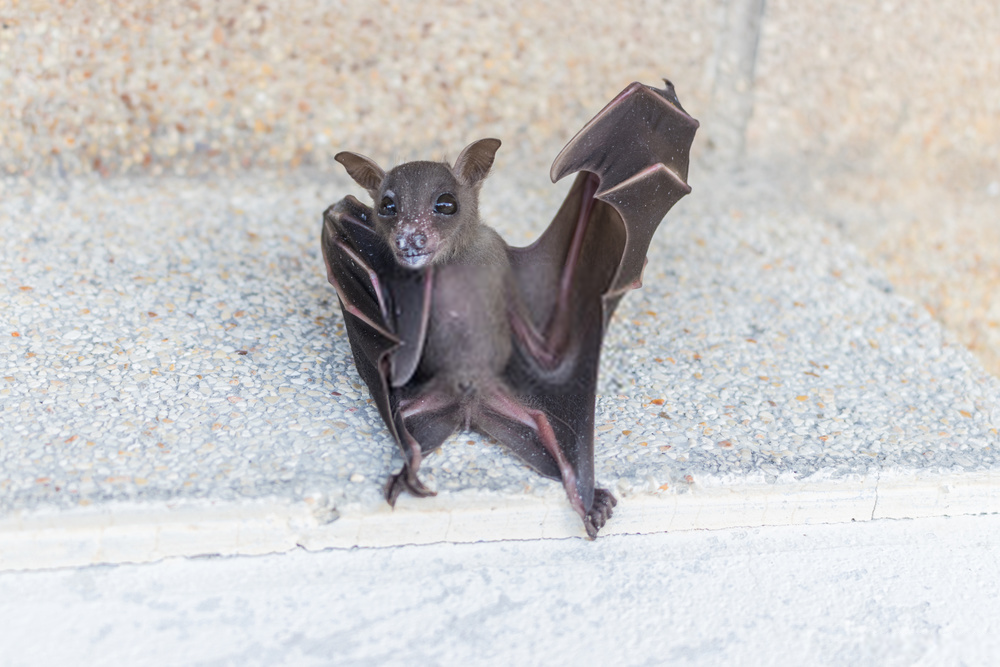 Bats can befriend humans and become pets. They are open to domestication and could also turn playful around humans. However, this comes at a major decrease in their life span.

While bats live as much as 30 years in wild habitats, their life span decreases significantly when they are caged. They live only 5 to 6 years when domesticated and this should be sufficient to discourage people from making them pets. In other words, they need to fly around a lot and this is completely stopped when domesticated, affecting their life and life cycles. Bats have a peculiar behavior of rubbing their urine into their fur. They do this many times during the day. Hence, by touching them you are touching a urine-smeared bat.

This behavior is referred to as ‘Urine wash.’ Bats like to smell in a particular way. They have smell glands to the flanks of their neck. They use this to give smell to things they want to mark. This sometimes leads to black markings in the corners of night houses where bats are kept. These substances are strong enough to wear the paint away.

Besides, the scent is a part of their communication with each other. Hence, they like to stay smelly all the time. Keep this in mind when you plan to pet a bat as the enclosure will surely smell quite a lot. This is when bats are kept outdoors. If they are kept indoors, the scent becomes worse and irritates inmates.

As the sole flying mammal, they have a high energy requirement. They process food quickly to generate energy. This means they eat and excrete a lot both in solid and liquid form. A fruit bat excretes 20 minutes after they have eaten something. Hence, the enclosure floor of the bat will most likely be full of bat waste in the form of liquid poop, solid poop, and urine and this will require regular cleaning.

They also produce a lot of spats. When a fruit bat consumes fruits, it wants only the sweet juice and not the pulp and rind which are difficult to digest. As they eat, they mash up the fruit at the roof of their mouths and get the juice, leaving behind the pulp which they spit out. These are called spats. One can expect any bat enclosure to fill up with these battered masses of fruits.

Bats also show specific social behavior that is linked to their living quarters. For instance, they hibernate throughout the days hanging upside down from ceilings. Further, there is highly social behavior especially among females who form a clingy relation with fellow females for several years. These behaviors will not be possible inside an enclosure.

Is It Legal To Keep Pet Bats?

It is illegal to keep native bats as pets in the USA. However, the import of certain non-native species of fruit bats is permitted. There are over 1,000 bat species found in the world out of which more than 40 are present in the United States (According to the National Wildlife Federation). The law safeguards the majority of them with federal and state regulations protecting their retention and capture rights.

The rights to legal ownership are mostly confined to research facilities, wildlife sanctuaries, and zoos. In order to keep these animals under captivity, one must acquire a license by the U.S. Department of Agriculture.

What Do Pet Bats Eat?

Bats have feeding requirements that are easy to meet when they live outside by themselves. However, this could get difficult for the owner to meet when the bat is domesticated. For instance, a wild bat eats between 500 and 1000 mosquitoes apart from flying insects during a single night.

They usually consume this over 2 or 3 hunting journeys. Their bodies have a high metabolism and their nutritional needs are high as a result. Such feeding habits help them to maintain a strong body apart from meeting other needs.

When domesticated, they will have to survive on mealworms, which is less nutritious compared to their natural diet. If you own a fruit bat, you may serve tropical fruits occurring naturally in the locality. For instance, they like to feed on bananas, avocados, dates, and mangos.

Do Bats Cause Rabies And Other Epidemics?

There is a widespread notion that bats are carriers of rabies. However, this is not true, and bats are as dangerous as any other animal in spreading dangerous diseases like rabies. In fact, only less than one percent of the bat population is responsible for spreading rabies (ScienceNews).

Besides, one needs to remember that bats do not have the same temper as cats or dogs. They are known to bite when they are upset, in pain, or excited. In case this happens, they may require extermination and quarantine. Apart from these, the victim is subject to the standard protocol for rabies which is not pleasant.

What Are The Chances Of Picking Up Rabies From A Bat?

A small proportion of bats transfer the virus responsible for rabies. However, it is worth noting that close to 90 percent of all cases of human rabies from the United States arise through contact with bats. This is equal to a total of two or three cases. Some cases occur when the victim stays in sleep and does not know when bats bite them.

Remember that rabies does not spread through contact of bat guano, urine, blood, or contact with bat fur. Instead, only the neural tissue or saliva is infectious. If one of these two enters the body through eyes, nose, mouth, or a wound caused by a bite, the victim could be in deep trouble.

Bats consume different things based on their species and location. The majority of them are insect eaters. They even help maintain the insects’ populations low and at a safe level. Bats employ echolocation to locate the insects at night.

The Big Brown Bat is among the most common species found across North America. It prefers insects of the size similar to a mosquito. They are known to consume close to thousand of these insects in under an hour. Moths and beetles are also their common prey. They even have jaws adapted to chomping the outer shells of the beetles.

There is a myth circulating that bats may attack humans. It is necessary to note that bats are usually harmless creatures and prefer to stay away from human presence. However, Vampire bats feed on the blood of other species including humans. They may feed on humans but this cannot be considered an attack.

Just 3 types of bats feed on other species’ blood. This includes livestock, birds, or even humans in the case of vampire bats. Bats that consume blood live mostly in the tropical areas of South, Central, and Northern America. A vast majority of bat species feed on fruits, nectar, or insects.

There is yet another false myth that claims the bats may fly into people’s hair if they walk outside during the night. The myth discourages young people from walking outside after dark. There is no truth in this belief.

However, bats may indeed fly closer to people at night as they fly about. This is because they are in search of their prey, the insects. They use their impressive navigation technique of echolocation to pinpoint their path and their prey. This avoids any collision with people.

Is it true that Bats can’t see?

There is a wrong notion that bats are blind. The truth is, bats have eyes that can see well. The majority of bats have advanced ears that help them detect objects in the darkness. This process is known as echolocation. This, though, is no reason for bats to have a poor vision sense. Bats employ their ears and hearing sense to hunt at night and tune into their good eyes to see things in the light of the day

Certain bats may not have an excellent color vision like humans, but their overall vision sense might be better than humans during day and night combined.

People with poor vision sense are called ‘blind as a bat’ which is inappropriate considering their good vision. The intensity of their sense differs from one species to another.

Both categories of bats namely, megabats and microbats involve in social exchanges using vision sense. This helps them keep an eye out from predators and navigate different places.

Megabats have big eyes and rely on their vision to find food and to navigate properly. On the other hand, Microbats employ echolocation to get to their food and to find their way around obstacles. Besides, they have comparatively small eyes. They also use their sight during the daytime to find objects lying outside their echolocation range which is between 36 and 66 feet.

Furthermore, bats are also said to be good at discriminating patterns. This could help in separating nectar from fruits.

Overall, bats are not made for domestication. They are wild creatures that have roamed our planet for over 50 million years. Hence, they would be better left free. The above are certain essential factors you need to remember in case you go ahead and pet a bat.