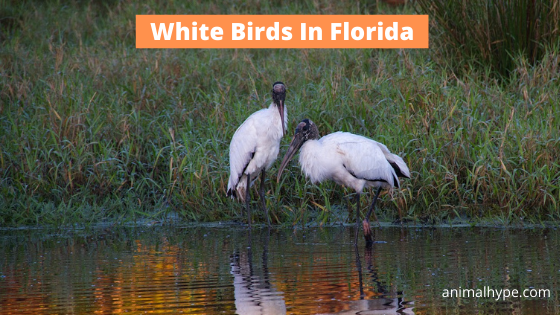 Florida is the paradise for all the bird-watchers for being home to a large variety of birds of all colors, shapes, and sizes. Whether you are looking for ducks, teals, cuckoos, hummingbirds, gulls, or loons, you will certainly find them here. Today, we are going to talk about the white-colored birds you are most likely to spot in Florida. 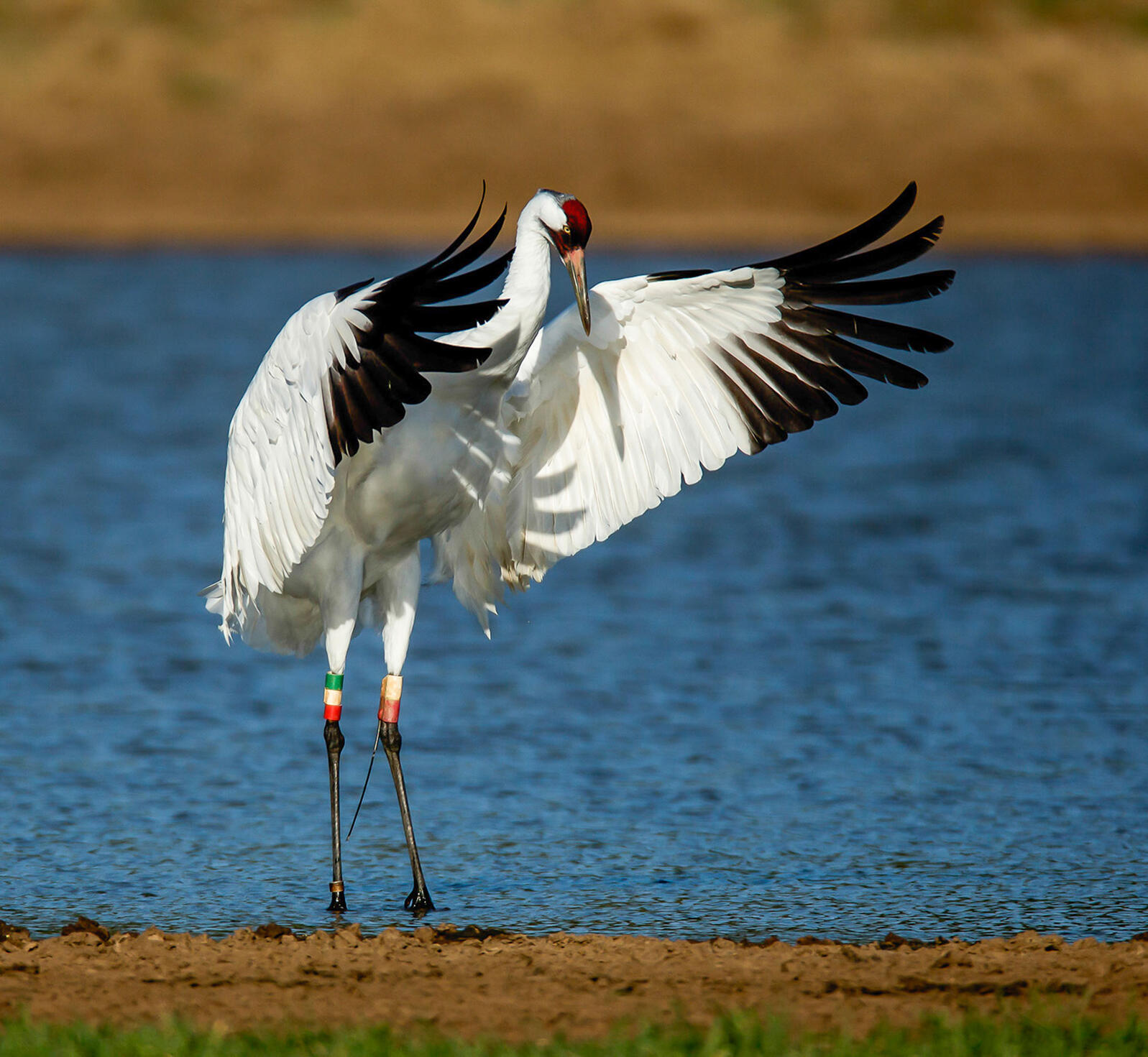 The Whooping Cranes are the tallest birds in North America that are also highly endangered due to their excessive hunting and the large-scale destruction of their habitats. At the global level, these cranes rank the fifth-largest among all the extant species of cranes.

The adult Whooping Cranes have a white body with a faded red crown atop their heads and a dark, point bill. Their flight wings have prominent black tips that look remarkable when they are in flight.

The juveniles, however, are cinnamon-brown in color. The calls produced by these cranes are rather loud and can be heard from a distance of several miles. They are known for producing a joint “unison call” after courtship, to defend their territories, and in the early mornings. 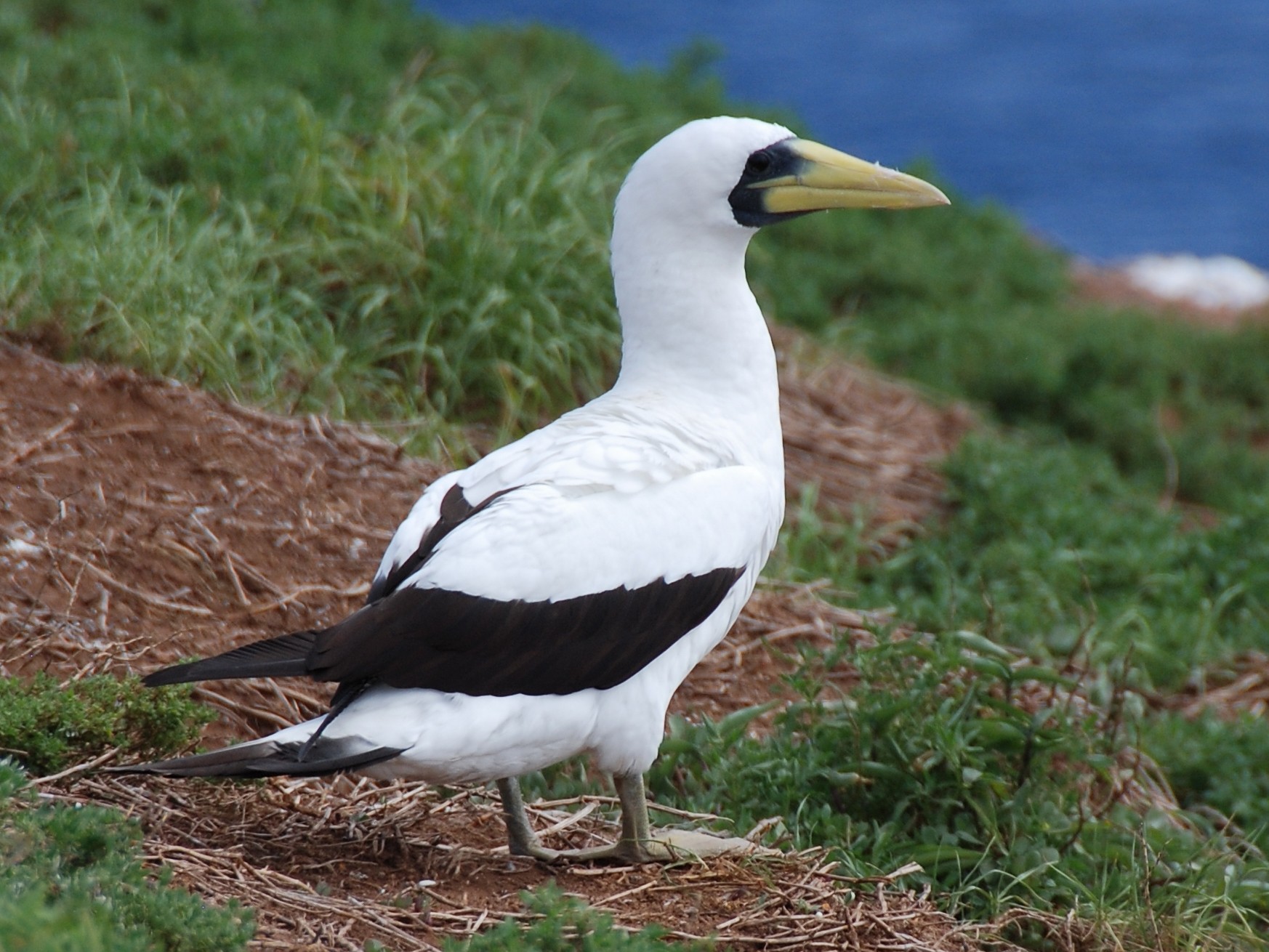 The Masked Booby is a large seabird belonging to the family of Gannets and Booby birds. Being the largest bird of the Booby species, these birds are also known by the names of “blue-faced booby” or “masked gannet”.

You can find them across all the tropical oceans except for the eastern Pacific and Atlantic. Their species was first discovered in 1831 by Rene-Primevere Lesson, the French naturalist.

The body of the Masked Booby is shaped like every other Sulid, with an aerodynamic shape, a long neck, slender wings, a pointed tail, and a long, pointed bill. Their head, backside of the neck, and wing-tips are black in color with a thin white streak on the neck; from the front, they are all white, with white chest, belly, and rump. If you look at them in flight, you will find them to be all white except their faces.

Masked Booby is an incredible diver, often diving to hunt for its staple diet, fish. Flying fish, in particular, is their favorite diet. However, they are also known to feed on the mollusks and other aquatic creatures if they can’t find fish. 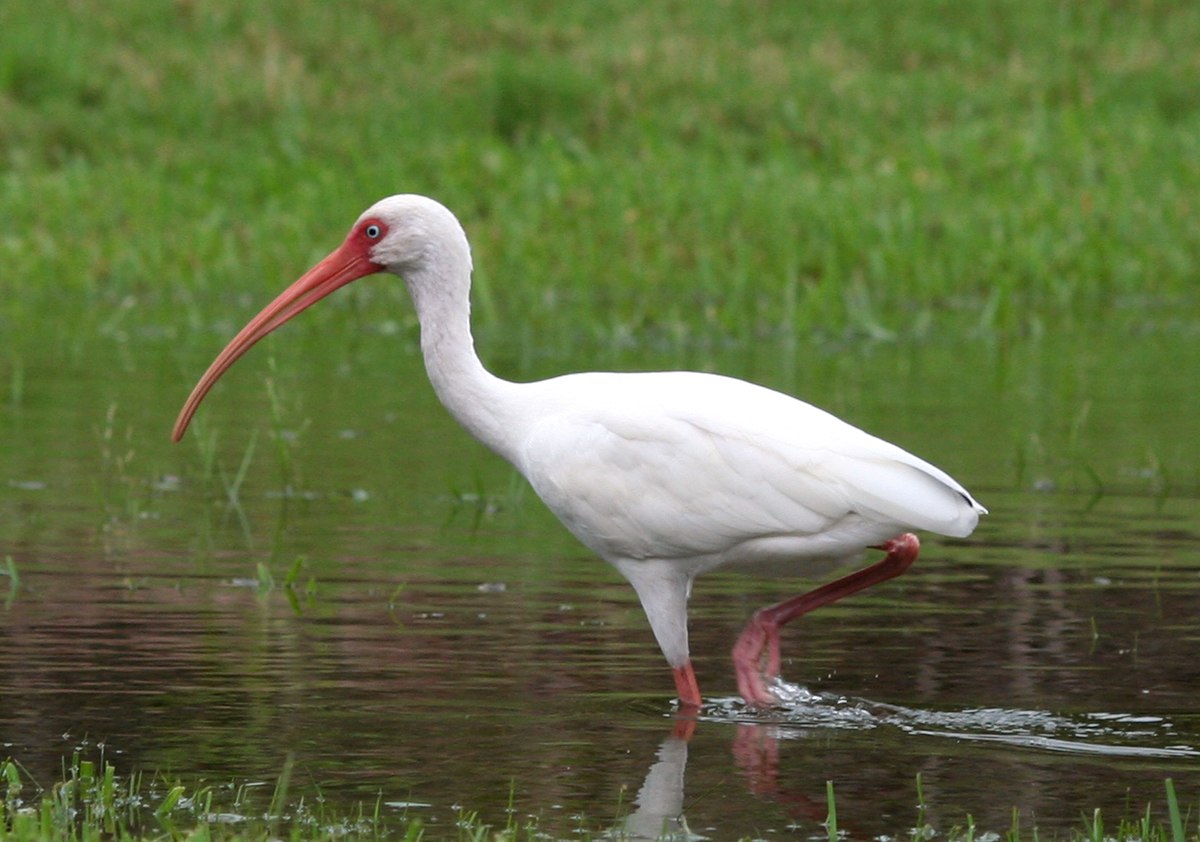 Also known as the American White Ibis, the White Ibis are large wading birds that belong to the family of the ibis. Their species was formally introduced by Carl Linnaeus in 1785 under the binominal name of “Scolopax albus”. In 1832, the German ornithologist, Johann Wagler, gave them their current binominal name.

With the exception of orangish bill and feet, these birds are entirely white with black tips on their wings that can only be seen when they are in flight.

When in flight, they outstretch their necks and legs to form a ‘V’. Their preferred diet is crayfish and crustaceans, although they can also eat small fish and insects. 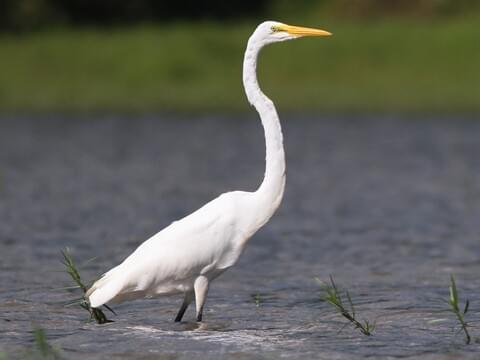 Apart from the Americas, these birds are found in Asia, Africa, and Southern Europe, and prefer to build their nests in the tropical and temperate regions with water bodies nearby. They are also known by other names, such as “large egret”, “great white heron”, and “common egret”.

Great Egrets have an overall white body with broad, white wings, yellow bill, black feet, and legs. During the breeding season, these birds grow delicate ornamental feathers on their back.

They feed on fish, small amphibians like frogs, reptiles, insects, and small mammals. During their hunt, they stand still for a long time and then strike their prey suddenly, catching them by surprise.

The Snow Goose is a medium-sized goose that is endemic to North America. Their species was formally introduced in 1785 by Carl Linnaeus. These birds breed in the north-eastern tip of Siberia, Canada, Alaska, Greenland, and migrates to the warmer parts of the continent such as south-western British Columbia and certain parts of the US to Mexico.

Although they are not the permanent inhabitants of Florida, you can find them in abundance throughout the state during their migratory season.

The Snow Goose has two different color variations: white and blue morphs. The former is completely white, with the exception of the black wingtips.

The blue morph birds, on the other hand, have a white head with bluish-grey plumage. While the while morph birds are widespread, the blue morphs are a rare sight, being slightly larger than their white-colored cousin.

Snow Goose is a strictly vegetarian bird that feeds on shrub, roots, grass, weed, clover, and aquatic vegetation. However, during the breeding season, they might feed on some insects for the production of a healthy egg. Belonging to the genus of large tropical storks, the Wood Storks are wading birds that were earlier believed to be an ibis. They were first described in 1785 by Carl Linnaeus.

You can find these birds frequenting the tropical and subtropical regions of the Americas, including the Caribbean. In the United States, you can find a small population of Wood Storks in the states of Georgia, Florida, and the Carolinas.

Both sexes of Wood Storks look alike, with the males being slightly heavier than their female counterparts. They have a bare head and neck with scaly, dark-grey skin.

Their bill is long and black, which curves downwards and has a certain width at the base. With a plumage that is mostly white, they have a short, black tail with an iridescence of green and purple.

In Florida, they nest in the mangroves, cypress domes, mixed hardwood swamps, and sloughs.

Aquatic creatures are the central food source of Wood Storks. During the wet season, they feed predominantly on fish and crabs, using frogs and other insects as an occasional treat. However, in the dry season, they are almost entirely dependent on fish. 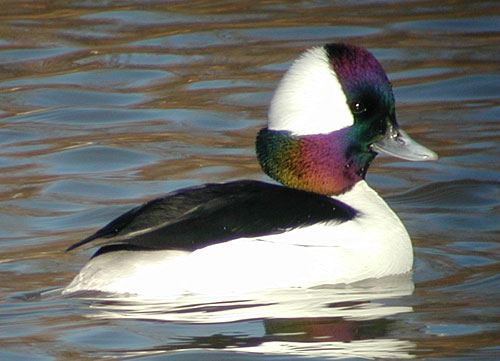 The Buffleheads are small-sized sea ducks that belong to the genus of the goldeneyes. Their scientific name roughly translates to “bull-headed”, which is indicative of their oddly shaped bulbous head.

These birds are sexually dimorphic, with the males larger in size than their female counterparts. The males have a black face with a green iridescence and a thick black streak on their back, apart from which the rest of their body is white, along with their wings.

On the back of their head is a bold white patch. In contrast, the females are much duller in appearance, with a dark head and upperparts and pale grey underparts.

Buffleheads often migrate to various parts of the United States, including Florida. Insects are their primary diet. However, in saltwater, they also feed on crustaceans, mollusks, aquatic plants, and fish. 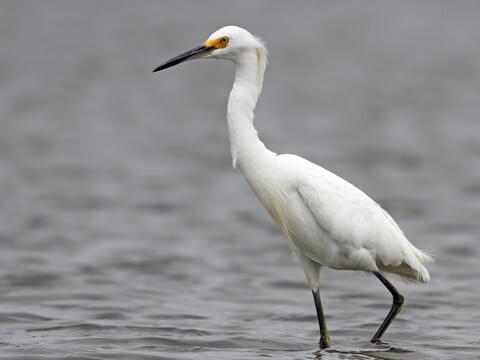 Native to the Americas, the Snowy Egrets are small, white herons that are in many ways similar to the Little Egret of the Bahamas. A couple of decades ago, these egrets were hunted fiercely for their feathers, which were to be used in women’s hats.

However, in response to the dramatic decline of their population, they are now protected by the US Government under the Migratory Bird Treaty Act. Also known as the “Black-capped night heron”, the Black-crowned Night Herons are among the most widespread herons of the world. These herons breed in freshwater or saltwater wetlands and migrate to the northern-most part of their range during their non-breeding seasons.

Although most of their body is white, they do have a black cap on their head that stretch to their upper back.

On their heads are a couple of white plumes that stand erect during courtship. They have a short neck, bills, and legs. They are one of the noisiest herons, constantly producing a calling sound that goes “woc” or “quok”. 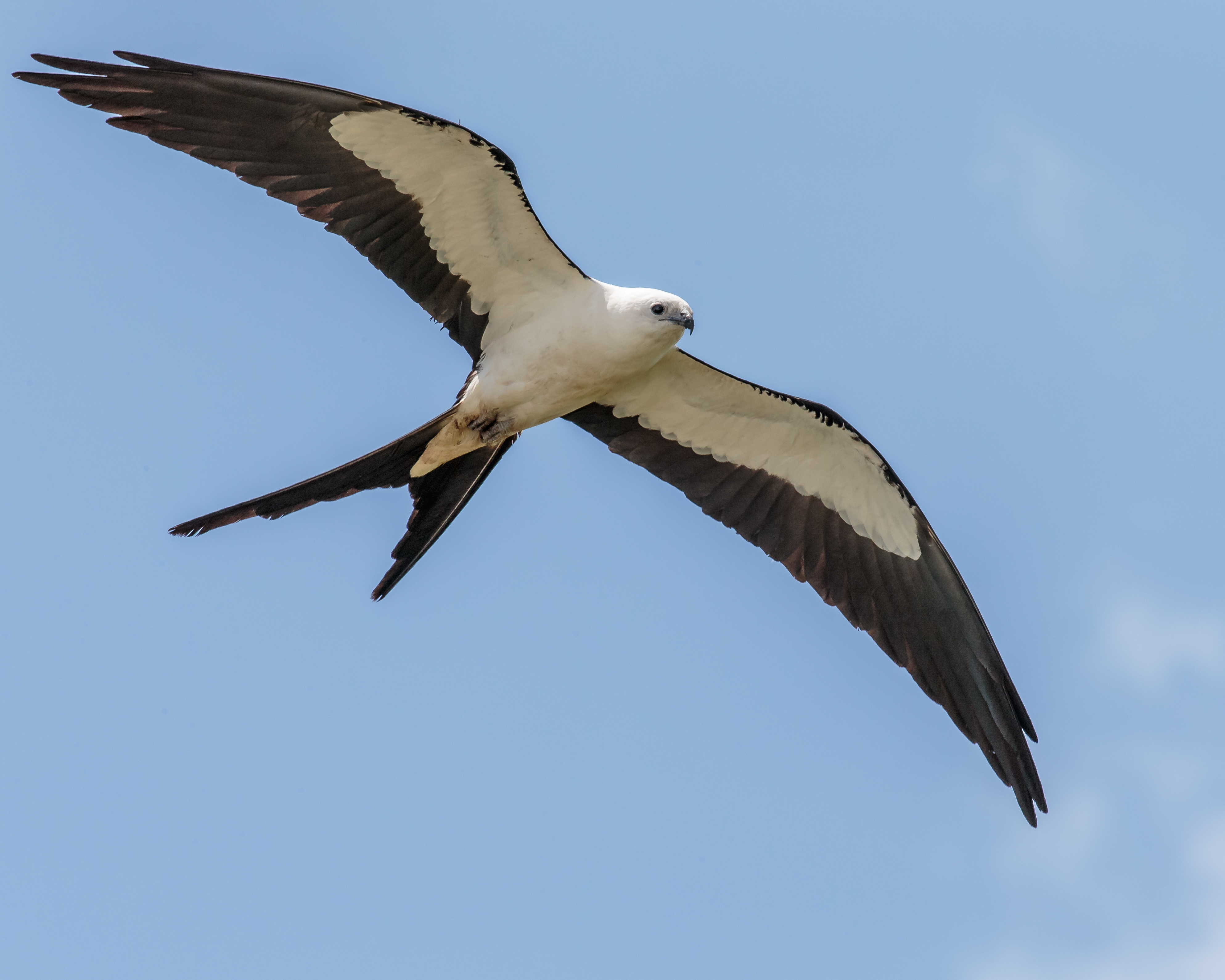 The Swallow-tail Kites are medium-sized birds that belong to the family of Pernine Raptors. Their species was first discovered in 1731 by Marks Catesby, the English naturalist. You can find these Kites all over the Americas.

While the population of Swallow-Tail kites in South America is permanent inhabitants, the ones that breed in Central and North America migrate to South America during winters. They inhabit wetland forests where they build their nests either in the Loblolly Pines or in the Bald Cypress.

The body of the Swallow-tail Kites is a stark contrast between black and white. While their back, flight feathers, tail, feet, and bill are all black, their heads, neck, breast, belly, rump, and under tails are white.

They have a fork-shaped tail, which is not prominent enough in the juveniles. These juveniles also have a duller body in comparison to the adults.

Although the Swallow-tail Kites are not noisy birds, you can find them emitting a high-pitched chirp occasionally. They feed on amphibians, reptiles, insects like crickets and grasshoppers, small mammals, and birds, including bats. 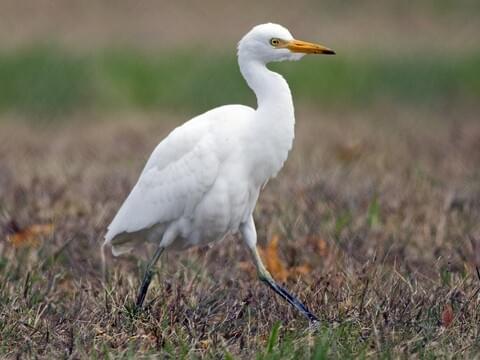 Although the Cattle Egrets are called “egret”, they are more closely related to the herons than the egrets. Their species was first discovered by Carl Linnaeus in 1785 but was later moved to its current genus in1855 by the French ornithologist, Charles Lucien Bonaparte. They’re called “cattle” because they often tend to forage on land like other cattle animals.

Cattle Egrets have a stocky body with a thick neck, sturdy-looking bill, and a hunched posture. During the non-breeding season, they have a pure white plumage.

However, as the breeding season approaches, the adults develop orangish-buff plumes on their crown, chest, `and back, and the color of their irises, bills, and legs change color to a bright red.

Cattle Egrets eat a wide variety of insects such as grasshoppers, flies, moths, crickets, etc., along with earthworms, lizards, and spiders.

Although there are many white birds that inhabit Florida, the 11 species that we have talked about above are the ones that are most widespread throughout the state and can be commonly spotted.

With the help of our article, you will easily be able to identify any white bird you encounter next time.

25 Types Of Ducks In Florida