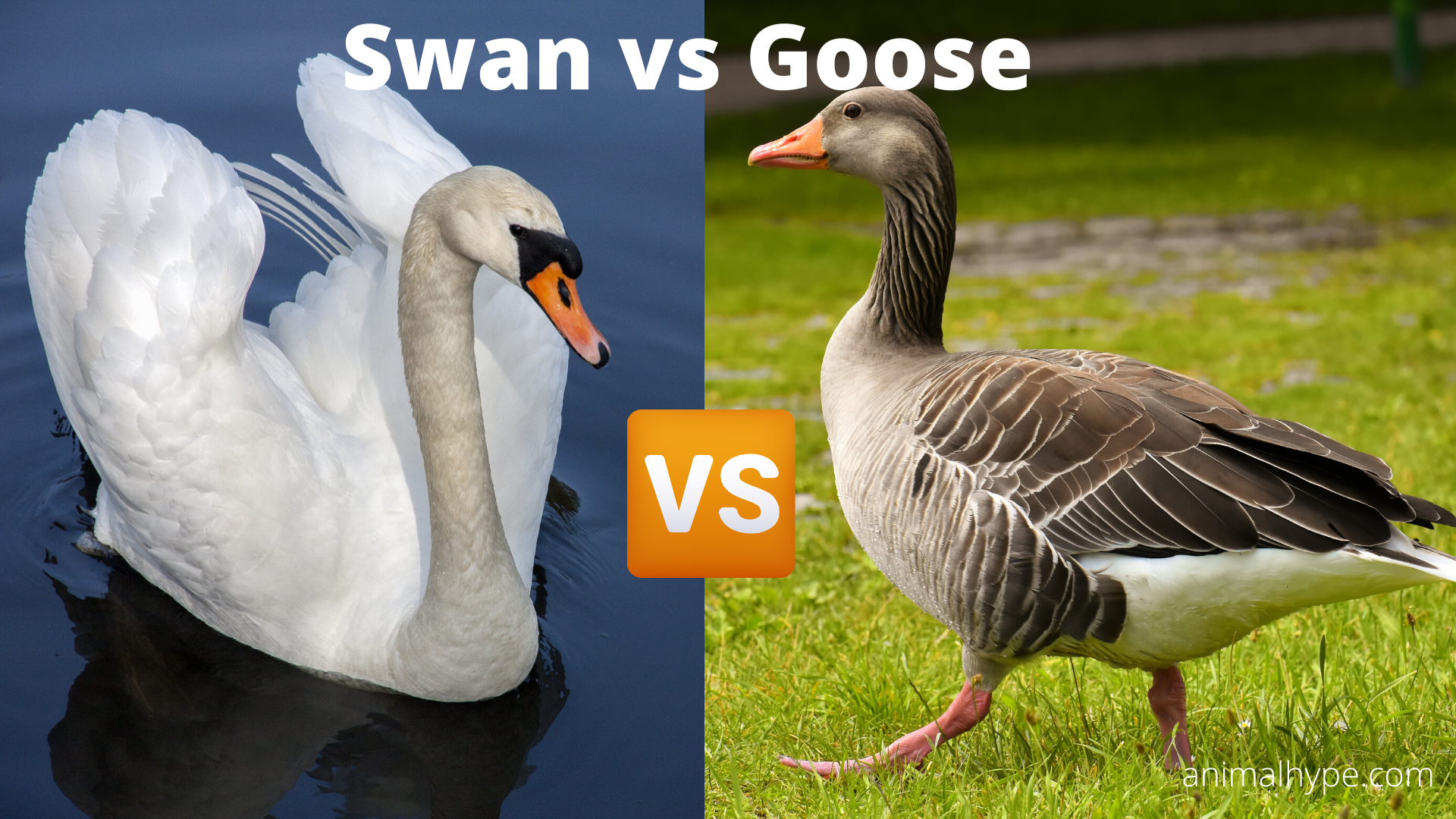 There are about 18,000 identified species of birds in the world. Out of which Anatidae is the family of water birds that are found all around the world. The prominent and most famous ones in this family are ducks, geese, and swans.

Being members of the same family, a swan and goose have a lot in common, including similarity in appearance, behavior, diet, etc. Due to this, most people find it quite tricky to identify them correctly.

What is the difference between swan and goose? The major differences between them are the shape of their neck and the color of their feathers. Swans, in general, have all-white feathers and a long ‘S’ shaped neck whereas, most geese have grey colored feathers and a short neck. Apart from these, swans are larger than the geese.

Though goose and swan belong to the Anatidae family, they belong to different genus. Swans belong to the subfamily of Anserinae and the tribe Cygnini whereas a goose belongs to a much diverse genus in the family of Anatidae with 3 genera and 22 subspecies.

Apart from the difference in their taxonomic classification, they both have a lot of differences in their physical appearance, habitat, diet, breeding & population.

It is important to note that though there are many stark differences between a goose and a swan, they have a lot in common. For instance, among the three types of goose, the grey geese are closely related to the swans in the taxonomic classification.

Here, we will have a look at the differences and similarities between a goose and a swan. You will also find out some interesting facts about them.

Differences between a swan and a goose

As said earlier, there are many differences between a swan and a goose starting from their taxonomic classification, size, habitat, diet, etc. In this section, we will have a look at each one of them in detail.

Though they both belong to the same family, it is essential to note that they belong to different subfamilies and tribes. For instance, swans belong to the subfamily of Cygninae, which has six different swans and many other extinct species.

Whereas, geese which are more diverse than swans, belong to different subfamilies and tribes. There are three main types of geese viz; The grey geese (Anser), The black geese (Branta), The white geese (Chen). These three belong to 3 different genera.

Swans and Geese belong to the same family of water birds, and hence they look a lot similar to each other. Due to this, it is quite common to see most people confuse one for another.

The largest among the swans, the mute swan, whooper swan, and the trumpet swan can have a wingspan of almost 1.5m. Whereas, a goose weighs only 7kg at the most.

The most noticeable difference between the geese and duck lies in the color of their feathers. Swans, in most cases, tend to have completely white feathers. In some instances, they can also have black feathers mixed with white and, in rare cases, all black.

This isn’t the case with geese that have a blackish, grey, or brown color. The only place where geese would have white feathers would be in their underbelly or tail.

Another notable difference between a goose and a swan lies in the shape of their neck. Swans have an iconic S-shaped curve to their neck, whereas geese lack this shape. If you have seen a goose, you might have noticed that they have a short and straight neck. Apart from this, swans have shorter legs than the geese.

Both swans and geese are primarily herbivorous birds. But on rare occasions, they can be seen to feed on small insects.

Swans are purely aquatic birds who spend most of their life in water. They mainly feed on algae, plants, roots, leaves, and seeds found on the water surface.

Though swans are primarily herbivorous, at times, they can be seen to feed on small shellfish. It is important to note that only the cygnets (baby swans) eat the shellfish. With age, they gradually stop feeding on animal matter.

Like swans, geese are also mostly herbivorous birds that primarily feed on grass, root, and leaves of plants in the land. Domesticated geese also feed on rice and corn.

Apart from these, geese also feed on small insects and mollusks owing to which they are considered to be natural pest control.

That being said, the diet of the domesticated geese and swans differ from those living in the wild. 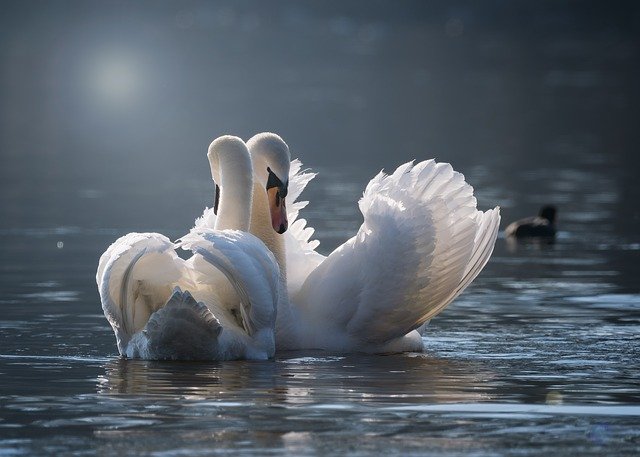 Both the swans and geese mate for life. This monogamous mating behavior of geese and swans have given birth to many myths surrounding them.

The most prominent among them is that swans and geese weep over their mate in the event of their partners’ untimely death.

It is also widely believed that they starve to death when their mate dies. These aren’t true. Though swans and geese are monogamous birds, they find another mate if one of the partners dies.

Though it is the swans that are praised for the strong bond they share with their partners, it is, in fact, the geese that have a better relationship with their mates. In some cases, swan pairs don’t choose to live together. Whereas, a goose pair never breaks the bond with their partners.

Are Geese and Swans Endangered?

Not all swans and geese are considered endangered. For instance, the North American Trumpeter swan was an endangered species in the 1970s when their numbers dropped to an alarming 3,700. 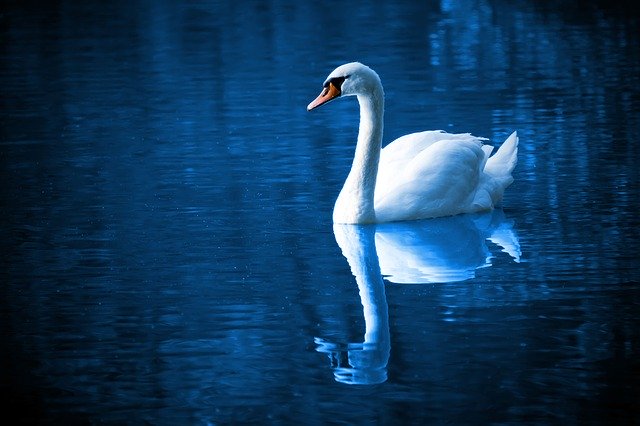 No, swans do not make good pets. Swans are huge and are known for being territorial and aggressive. Though they look very similar to a duck and a goose, their behavior and instincts are different.

Apart from these, they are high maintenance pets, and ideally, they would need a large pond, greenery, and straw for nesting.

If you are adamant about getting a pet swan, it is important that you know a thing or two about them. For instance, swans do not trust people easily, and they seldom like to be touched yet petted.

If you were to bring a swan home, the chances are that they will chase and bite you. A swan’s bite can be quite painful, unlike what you expect. A swan’s beak has serrated edges that look like small teeth.

But yeah, if you can gain the swan’s trust, they may let you pet them. But they would still be careful, so make sure that you look for any signs of aggression and back off at the first hint. Also, you can’t expect to take the swans indoors because they can create a big mess indoors within seconds. 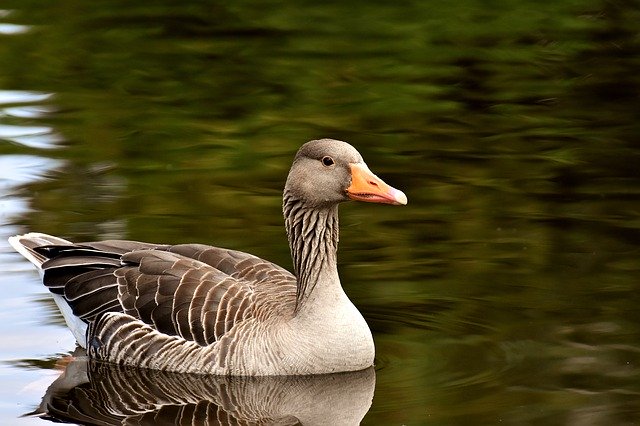 Compared to swans, geese make a better pet. The fact that they aren’t as aggressive and territorial as the swans make them easy to handle.

But that being said, you can’t expect to go and pet a wild goose because they can be as intimidating as a swan towards strangers.

If you were to get a pet goose, you should first try and gain its trust. The best way to gain the trust of a goose is to imprint them when they are born.

Another important thing is to choose the right breed for your need. If you were to add the goose to your backyard poultry, get a Chinese Geese that can lay up to 60 eggs during spring and summer. Similarly, if you were to get one as a pet, you should choose breeds like Toulouse, The American Buff, etc.

Can geese mate with swans?

Most people might find it hard to believe, but it does happen in the wild. Hybridization is quite common among goose, swans, and ducks.

Hybridization among the aquatic birds has been a matter of fascination for many. A lot of studies happened to find out as to how it happens, and they found it.

One way is when a male goose/swan chooses to mate with an unwilling female goose/swan. Forced copulation is quite common among ducks, geese, and swans. Though it generally happens within the same species, sometimes it can also occur between similar species.

Why do geese and swans mate for life?

There have been many myths and folklores surrounding their monogamous nature. Where many have portrayed them as the symbol of everlasting love. In this section, we will have a look into this trait of theirs and understand more about it.

We will have a look at the reasons for their monogamous nature.

It isn’t easy to find a healthy mate.

When it comes to life in the wild, mating is an essential aspect of their life. They make an effort to find a healthy mate that can ensure the sustenance of its genes in the next generation.

Once they have found a healthy partner, they try and mate as much as possible to reproduce as many cygnets as they can in their lifetime.

Instead of spending time searching for new partners’ swans and geese focus on mating successfully with their existing partners.

Though swans may appear to be flag bearers of peace, they aren’t. Don’t be deceived by their looks; swans and goose are territorial and can get quite aggressive. It is very common among swan/goose pairs to fight among themselves for breeding & nesting grounds.

A pair who is highly effective in warding off an attack from a contestant would never want to part their ways. For them, they have a better chance of survival if they are to stick together.

Apart from this, the chances of a solitary goose and swan being attacked by other pairs are very high.

Most geese and swans tend to migrate during winters. For instance, some species of swans migrate all the way to Russia from Europe in search of better nesting grounds. It is important to note that they cover this entire journey in a single stretch except for small pit stops.

For these migratory birds, they aren’t going to get enough time to find a potential mate, pair, and breed with them. Migrating in pairs saves them a lot of time and thereby increasing the chances of a successful mate.