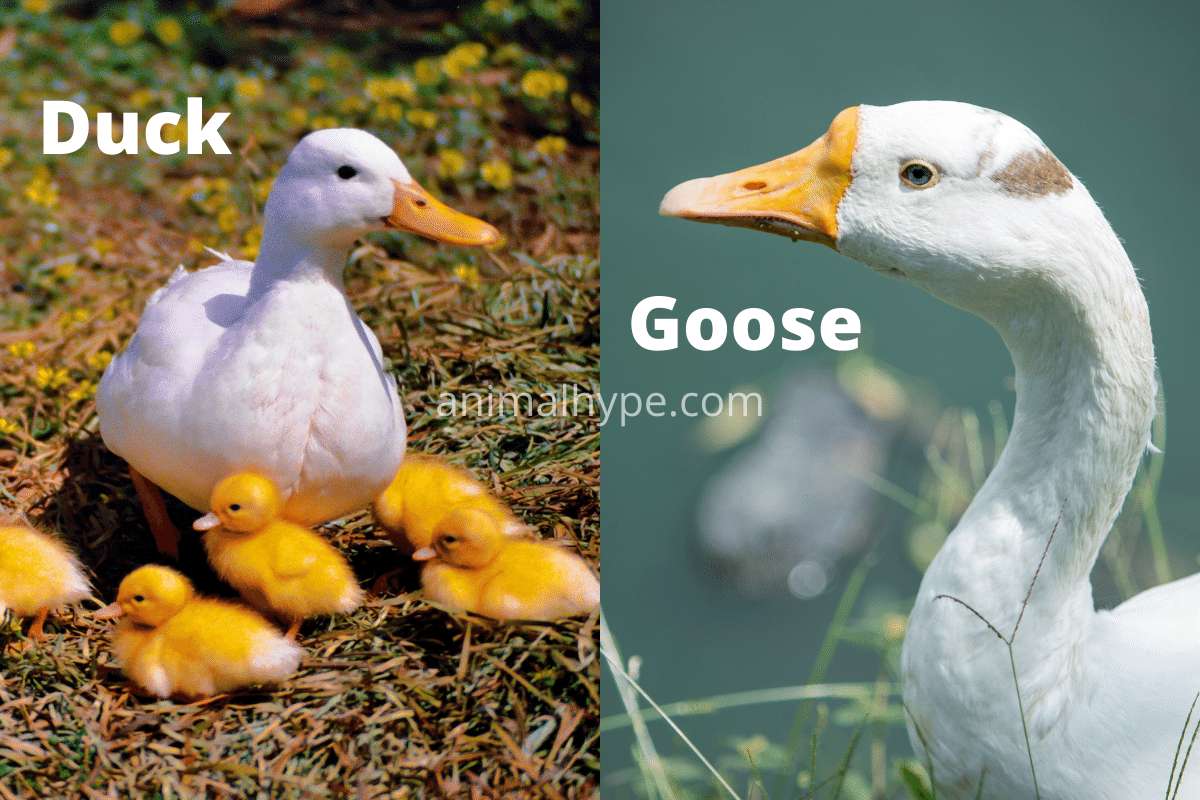 Geese and ducks have several similarities. Both birds are from the same family of birds called Anatidae. Therefore, in addition to looking similar, their behavior and way of living are quite similar. However, there are many differences between the two birds. So, without further ado, let’s discuss the similarities and differences and settle the Goose vs Duck debate.

Geese and ducks are not the same birds, even though they’re from the same family and look similar. Geese are larger than ducks, mostly get food from the land as opposed to the water, have shorter and stubbier bills, and live longer than ducks do.

This article will touch on all of the specifics that set these birds apart.

There are many differences between these types of birds, including their size, color patterns, bill shape, etc. Here are the differences for each aspect so that you can differentiate between these birds when you see them.

Please note we’ll discuss the differences first and then move on to some of the similarities between the bird species.

Ducks are generally smaller than Geese. There are various types of ducks, so we’re using the measurements for mallards to explain the size differences between geese and ducks.

For those of you who don’t know, Mallards are one of the most common ducks you can find in North America and Eurasia. They’re also the ancestor for most domestic duck breeds.

The size of an average Mallard is between a crow and a Canada goose. Therefore, its average measurements are:

Because ducks are smaller than geese, they also have less weight. The average weight for a Mallard is between 35.3 oz and 45.9 oz.

For the purposes of this size comparison, we’ll use the Canada Goose as a reference. Canada geese are found all across North America. They fly around from one place to the other a lot and are visible mostly in the summer.

The size of an average Canada goose is between a mallard and a Mute Swan. Thus, it’s average measurements are:

From the details above, it’s clear that even the smallest of average geese are larger than ducks. Geese are significantly longer head to tail, and their wingspans are much longer as well.

The goose’s overall greater size also means that it’s heavier than average ducks. The average weight of a Canada goose is between 105.8 oz to 317.5 oz.

Length of the Birds’ Necks

Another visible difference between geese and ducks is the bird’s neck length.

In addition to that, ducks have fewer bones in their necks than geese do. An average duck has 16 or fewer bones in its neck. On the other hand, geese have anywhere between 17 and 23 neck vertebrae, depending on the breed.

The difference in the neck length allows the geese and ducks to coexist in one environment. As geese have longer necks, they can search for and reach different types of food in the water.

Ducks cannot get to these foods while swimming in a body of water. Therefore, they do not need to compete against geese for food and eat what’s present in the parts that are closer to the surface of the water.

Many breeds of female ducks are known for communicating through persistent quacking. They use this form of communication for various purposes and in different spaces.

Ducks quack to make other ducks know their location when they are on a breeding ground. They also use this vocalization during hatching and when searching for a nest site.

Geese do not quack; they honk. You may have heard a Canada Goose honk while flying overhead. Geese also communicate for the same reasons ducks do.

Both male Mallards and Canada Geese use vocalization during breeding. Mallards use noisy calls to protect their mates from other males that may harass them. Canada geese’s honks are loud, so they use that to advertise and defend their breeding territory.

The U.S. Fish & Wildlife Service classifies ducks into three distinct categories. Each of these categories has to do with how these birds acquire their food. These classifications include dabbling ducks (like the Mallard), sea ducks, and diving ducks.

Dabbling ducks catch their food by dipping their heads into the water when floating in it. Mallards graze on the plants under the water’s surface.

Diving ducks stay close to deeper rivers so that they can search for their food within the water body.

Sea ducks, as the name suggests, get their food from the sea.

All of the ducks within these categories have specific behaviors and characteristics that make them unique.

Conversely, geese are grazers and therefore, eat land plants and grass. They also eat some aquatic plants. This eating pattern is reasonably consistent among the many types of geese that are out there. 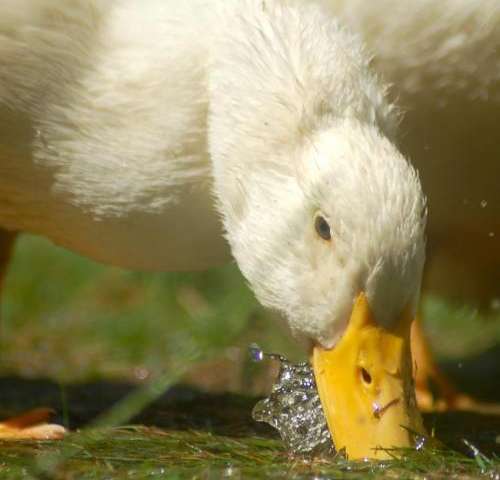 Dabbling ducks such as a Mallard have round-tipped and flat bills. The bills are approximately as long as their heads. The bills are also soft at the edges because these birds search for food by touching and feeling it.

This behavior is similar to the way we use our fingertips to sense different things and materials.

These birds’ bills also have nails at the end to hook or move food items. Ducks mostly look for their food in water or mud. These birds also use their lamellate to expel non-food items when searching for and consuming food.

Geese, alternatively, have shorter and stubbier bills. The Canada Goose is the perfect example of this comparison as it uses its bill for grazing. Therefore, another prominent difference between geese and ducks is the food they consume and where they find it from. Canada geese have straight and stout bills that they use to shear off grass from the ground.

Now, while Canada Geese have significantly different bills as compared to ducks, there are also variations in bills among geese alone. For example, unlike Canada Geese, Snow Geese have curved bills, which make them look like they are smiling.

The visual difference between these two breeds’ bills is attributed to snow geese’s diet of tubers and roots of sedges and marsh grasses centuries ago.

Ducks have a shorter lifespan than geese. 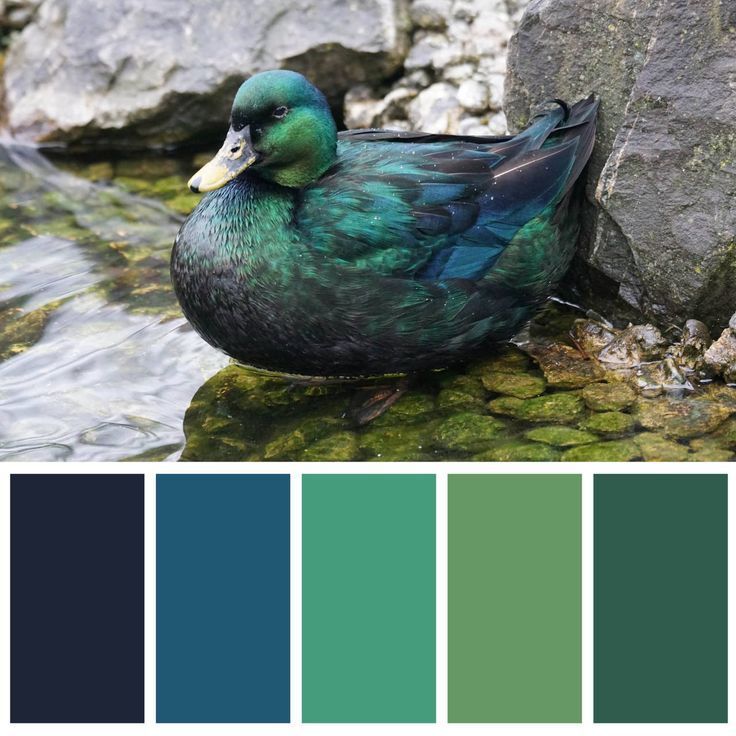 It’s important to note, however, that male ducks tend to have more brightly colored feathers than their female counterparts. Opposingly, there’s no significant difference in feather colors between the male and female Canada Geese. That’s’ not the case with Mallards.

In the case of the breeds of geese and ducks mentioned above, Canada geese and Mallards have multicolored feathers. Male Mallards have dark green heads with gray bodies, black rears, and brown breasts. They also have blue “speculum” patches with white borders on their wings—as do the female ducks.

Both male and female Canada Geese, on the other hand, have black heads, white chinstraps and cheeks, black necks, brown backs, and tan breasts.

Both ducks and geese live in similar habitats—near any water body. Both of these birds travel from one place to the other, but they settle near rivers, ponds, lakes, park lawns, and so on.

Mallards can survive in artificial wetlands as well, which is why you can find them in residential backyards as well.

Both ducks and geese swim in bodies of water and stay close to it. Therefore, these birds have webbed feet that help them paddle through water. These birds’ webbed feet also help them walk on mud, allowing them to search for food on such terrain as well.

These birds also secrete a certain type of oil on their feathers to shed water quickly. This way, they don’t weigh much when they’re wet, allowing them to fly with ease.

The similarities and differences between geese and ducks should be clear to you at this point. Therefore, if you live on a farm or deal with birds, knowing how to identify them can guide you on how to look after one properly.

Also, if you want to know the Anatidae family birds well, you must also learn about swans.

Swans also look a lot like geese and ducks because they’re all a part of the same family. However, swans are clearly the largest of these three bird species. So, the next time you hear a bird honk above you or see one waddle in the park, you’ll know exactly which one it is!