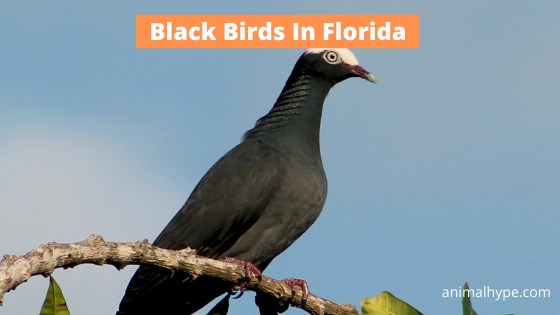 Florida is known for its natural beauty and soothing climate. The whole state is teeming with wildlife, with thousands of terrestrial animals, birds, and marine creatures. Today, we will take a look at all the black-colored birds that you can commonly spot in Florida. 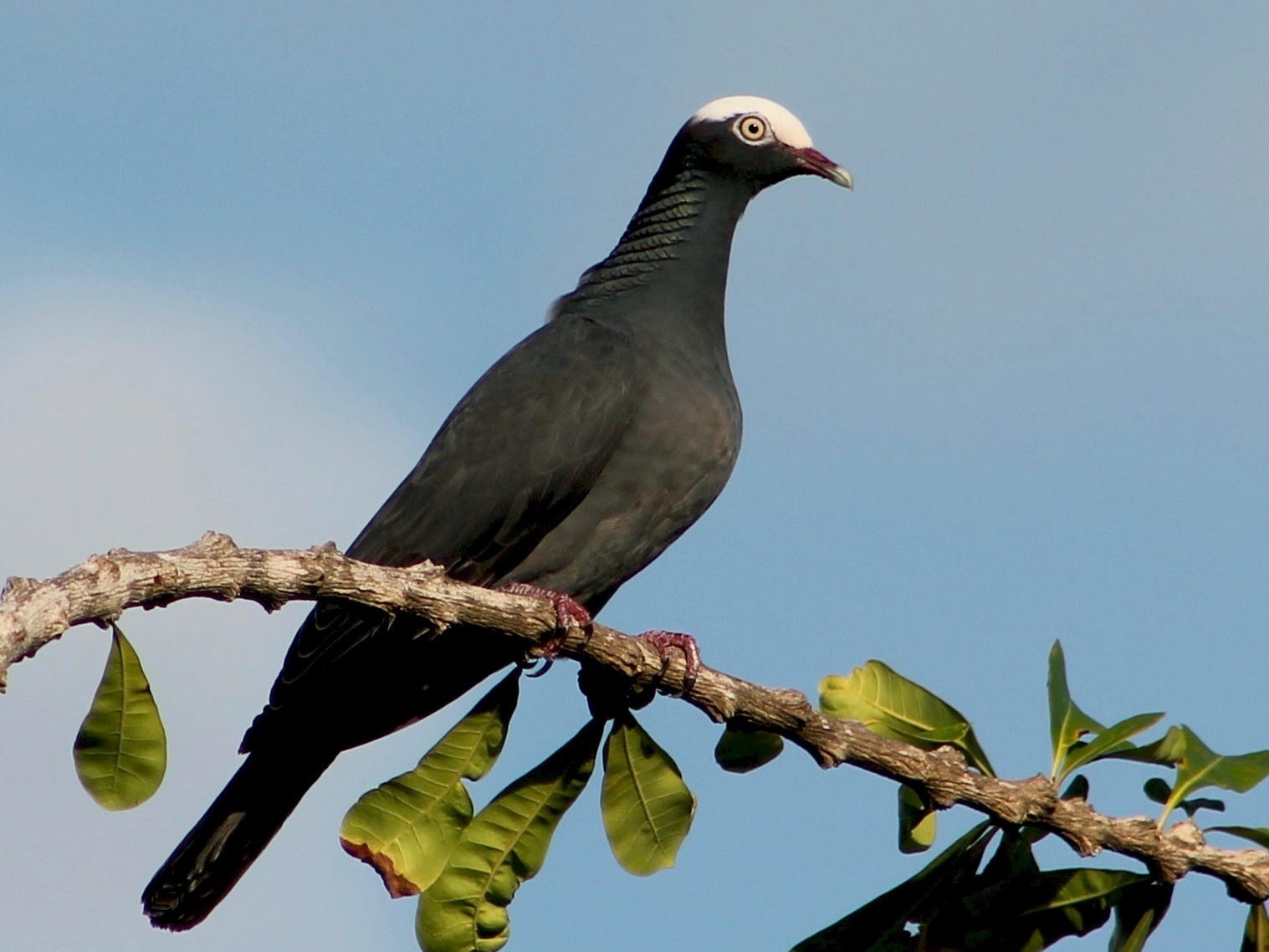 The White-crowned Pigeons are endemic to the state of Florida. These seed and fruit-eating birds are members of the family of pigeons and dove. They are about the same size as a regular pigeon but are lighter in weight and have squarer tails.

Their plumage varies from black to grey, with a bright white crown atop their head that appears duller in the females. The juveniles have a greyish-brown body, a red bill tipped with grey, and white irises. Their distinct calling sound is a loud “coo cura coo” or “coo croo”. 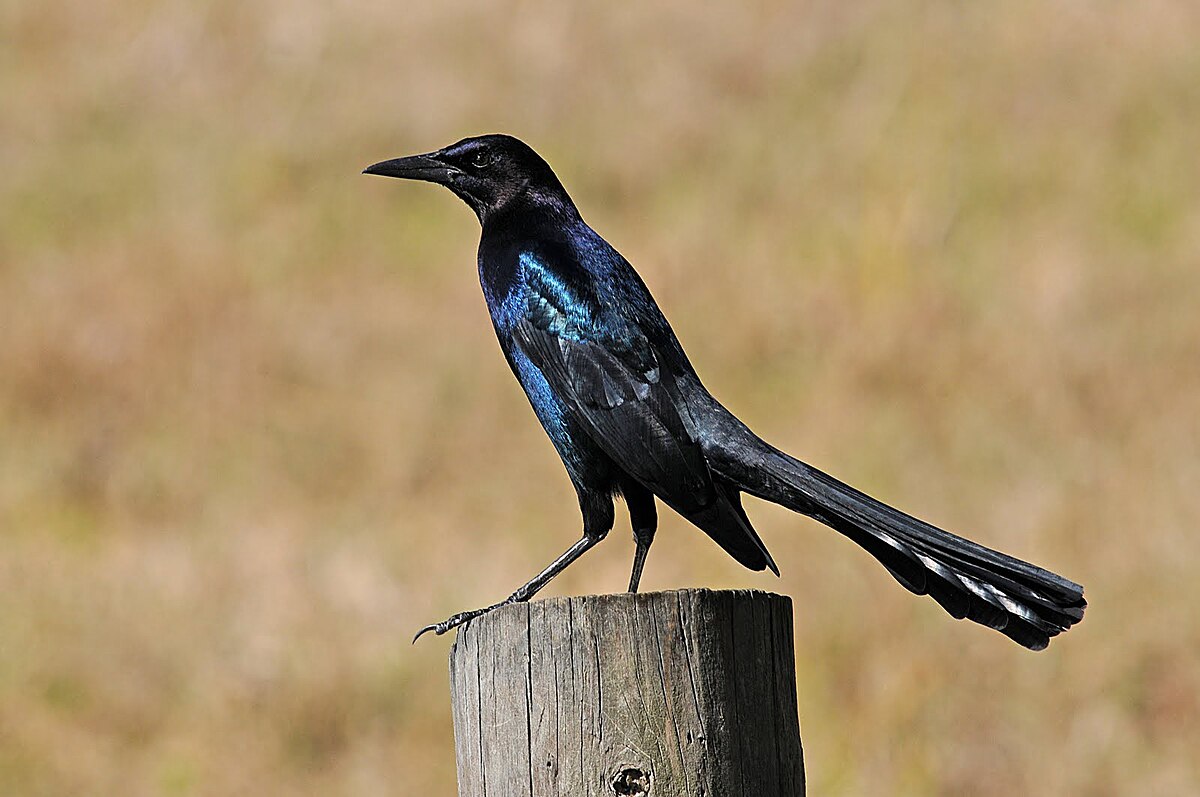 The Boat-tailed Grackles are passerine birds that belong to the family of Icterids. These birds are breeding inhabitants on the south-eastern coasts of the United States.

Being sexually dimorphic, the male Boat-tailed Grackles have an iridescent black plumage with a dark bill and a yellow-to-brown iris. Their tails are keel-shaped.

On the other hand, the females are smaller than their male counterparts, with a tawny-brown plumage and a short tail. Boat-tailed Grackles can feed on amphibians, insects, minnows, berries, grains, seeds, and eggs. The Smooth-billed Anis are members of the cuckoo family that are believed to be related to the passerine birds due to the physical similarities between the two. These birds breed in southern Florida, parts of Central America, and the Caribbean.

Smooth-billed Ani has an entirely black body with a ridged black bill, a long black tail, and dark brown eyes. Although they are not skilled in flight, they are great runners on the ground. Most of their foraging takes place on the land as well. The Snail Kites are the birds of prey that breed in central and southern Florida in the United States, tropical South America, and the Caribbean. Snail Kites are selectively migratory, with only the southernmost population traveling north in the winter.

Snail Kites have a reverse sexual dimorphism where the females look slightly larger than the males. The males have a dark body with bluish-black plumage and a long tail. Their rumps and under tails are white.

On the other hand, the females have a white face with brown streaks, a dark brown upper part, and heavily streaked underparts. Their feathers are dark brown as well. The main food of these kites is the apple snails, which is why they have “snail” in their names. 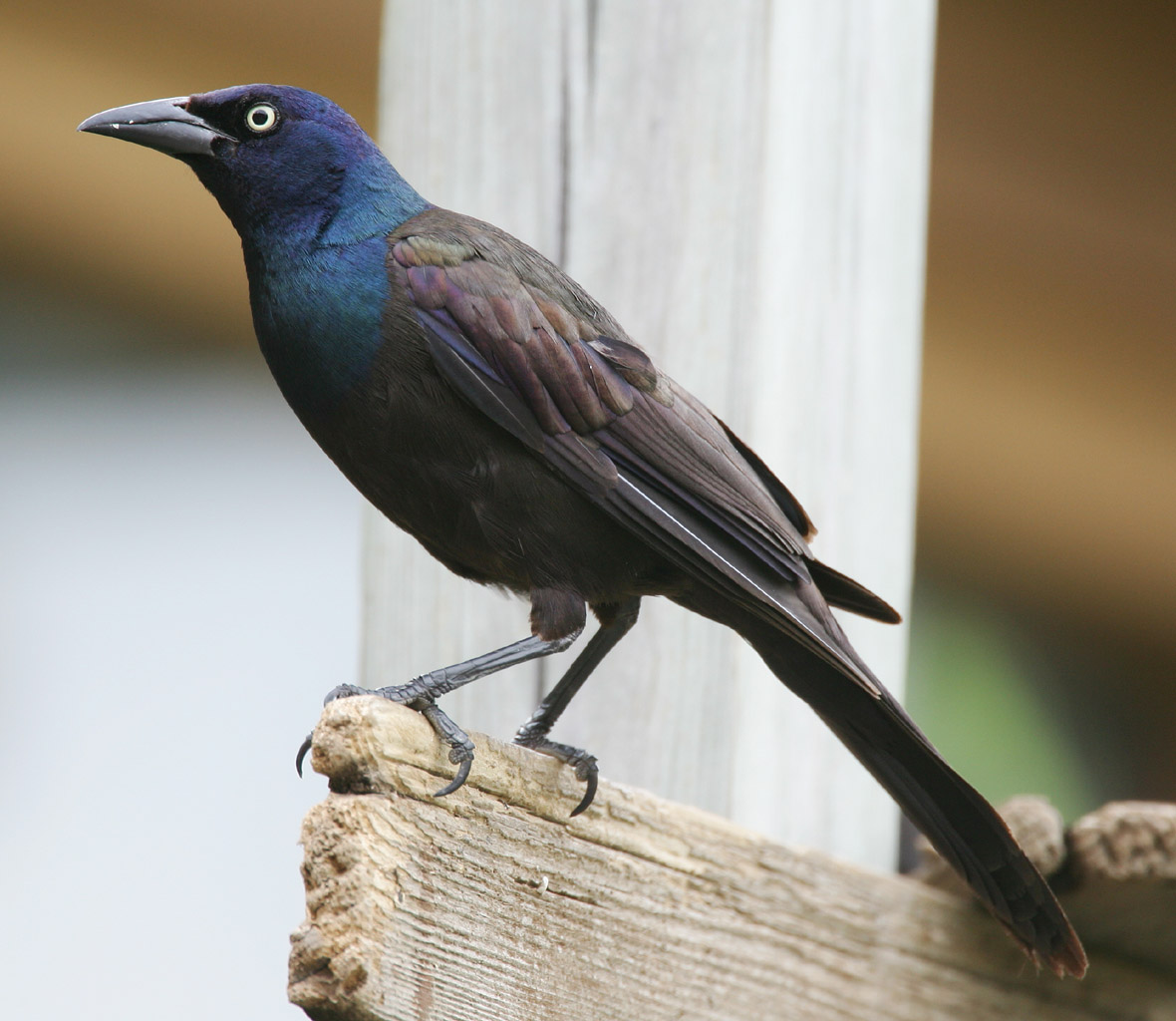 The Common Grackle is a large bird that belongs to the family of Icterids or New World Blackbirds and is found in abundance throughout most of North America. Although these birds are sexually dimorphic, the extent of dimorphism is much lesser in them than the other, larger Grackle species.

They have black feathers with blue, purple, or green iridescence over them, and a long, black tail. Their eyes are pale-yellow, with a long, dark bill. The females are smaller in size and duller in appearance and lack most of the sheen of their male counterparts.

The species of the Common Grackles was first discovered in 1758 by the Swedish botanist, Carl Linnaeus. These omnivore birds can feed on seeds, grains, berries, minnows, eggs, insects, amphibians, mice, and smaller birds. 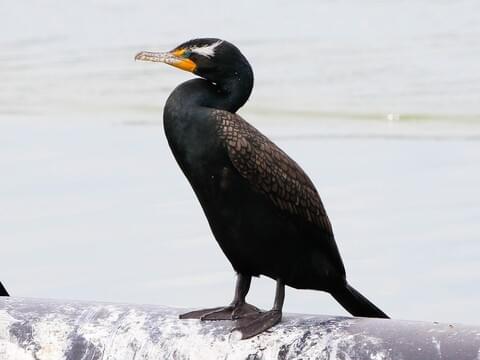 The Double-crested Cormorants are members of the Cormorant family of seabirds that are found throughout North America. These birds were first discovered in 1831 by the French naturalist and ornithologist, Rene Primevere Lesson.

They have a medium-sized body with a long neck, short tail, webbed feet, and a hooked bill. They have a dark plumage with an orangish-yellow gular skin. On their heads are two white crests on each side, which gives them their name. These crests are located just above their eyes.

The juveniles have duller plumage with a grey or brown color with a yellow bill. The Double-Crested Cormorants are known for catching their prey by diving into water bodies. Fish is the main diet of these birds, although they can also feed on crustaceans and amphibians occasionally. American Coots are often confused with ducks, although they are members of the rail family and are only distant relatives of ducks. The best way to distinguish between the two is to look at their feet.

While ducks have webbed feet, the feet of the Coots have broad scales on their legs and toes that fold back in order to make walking on the ground easier for them.

The American Coots have a dark body with an iridescent bluish hue on their plumage. Their heads are darker than the rest of their body. They have a white frontal shield atop their thick bill.

Both sexes look alike, with the females slightly smaller than their male counterparts. American Coots are dependent on the aquatic vegetation for their diet but can also eat fish and other aquatic animals. 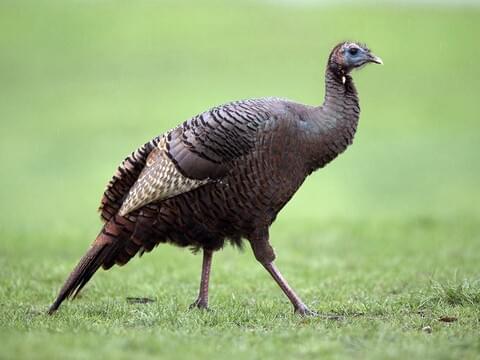 Endemic to North America, the Wild Turkeys belong to the family of fowl game birds but reside on the land. They are highly adaptable fowls that can live in any kind of vegetation as long as they can find proper coverage and opening.

Their preferred habitats are mixed conifer hardwood forests with marshes, orchards, pastures, or fields located nearby.

The adult Wild Turkeys have an overall dark-blackish body with an occasional coppery sheen in the males. The head of the males is red and mostly featherless with several fleshy outgrowths called caruncles.

They also have red wattles on their throat and necks and a fan-shaped tail. The females, that are much smaller than their male counterparts, have dull feathers in shades of grey and brown. The ideal diet of these birds is bearberry, juniper, acorns, nuts, the mast of chestnut, hazel, and hickory trees, seeds, roots, and some of the small insects. 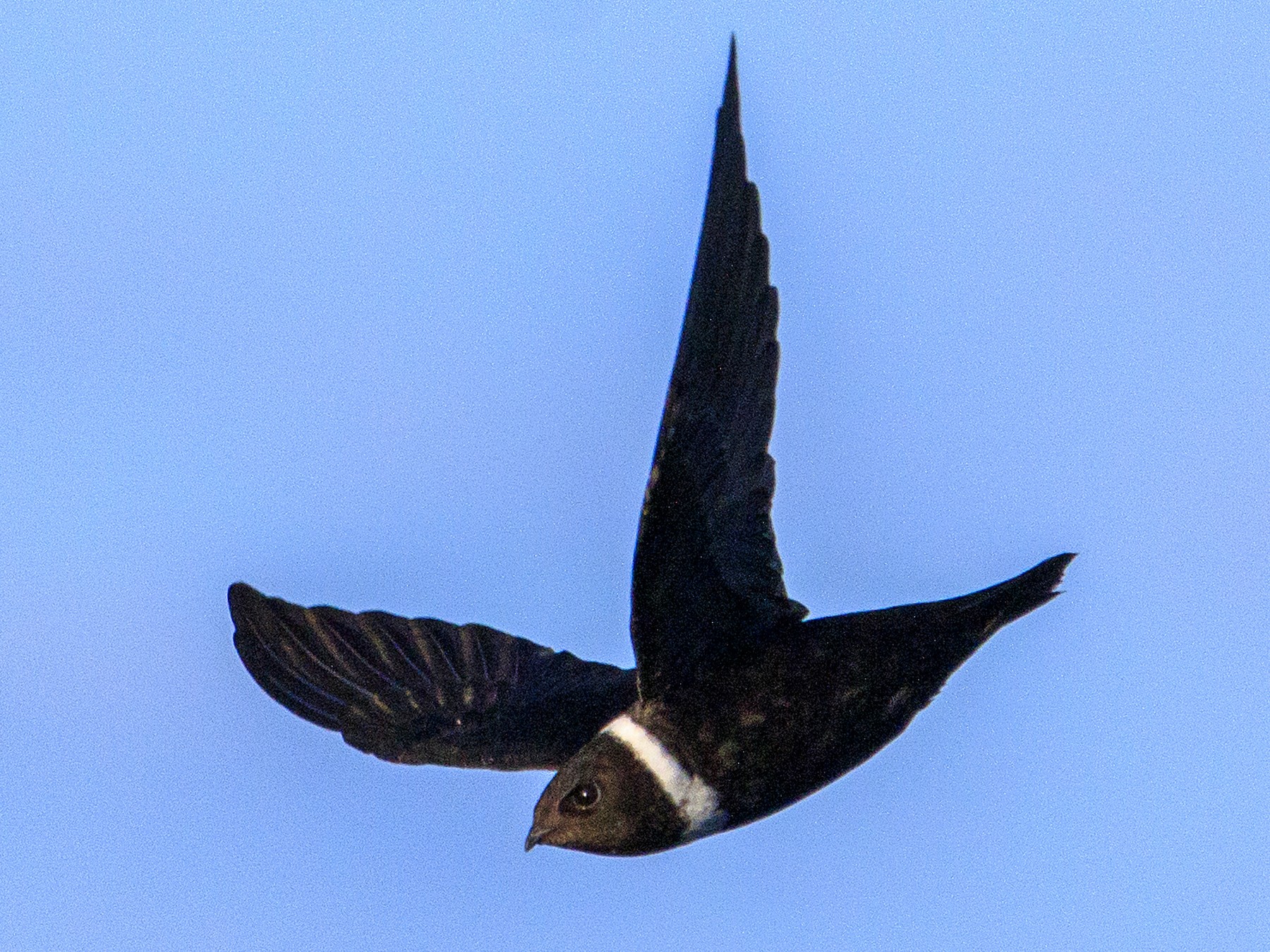 The White-Collared Swifts are large members of the Swift family that breed in the mountains and foothills in northern Argentina, south-eastern Brazil, central Mexico, Peru, Trinidad, and the Greater Antilles.

They are the largest Swift species you can find in Florida, and the second-largest in entire North America, only slightly smaller than the White-naped Swifts that breed in Mexico.

The adult White-collared Swifts have a black body with a prominent blue gloss on their back and a white-collar. Their tails are somewhat like squares with a slight fork at the edge.

The juveniles are duller in comparison to their parents and have a reduced or no collar. These birds mostly feed on flying insects such as flying ants, beetles, and bees.

The Black Rails are among one of the smallest members of the Rail family, growing about the size of a mouse. These tiny marsh birds have an entirely black body, with black beak and legs.

The only colored part of their body is their eyes, which acquire a redness once they get older than three months. Although they prefer to inhabit salt marshes, you can also find them in freshwater marshes.

Due to their habitat loss, the population of the Black Rails is steadily declining and is considered to be threatened in many regions.

The Black Rails forage around the water line after high and low tides and can eat a variety of crustaceans and mollusks. They are also keen on eating seeds and small insects. You can easily spot these birds from their loud call, which sounds like “ki ki krr”. 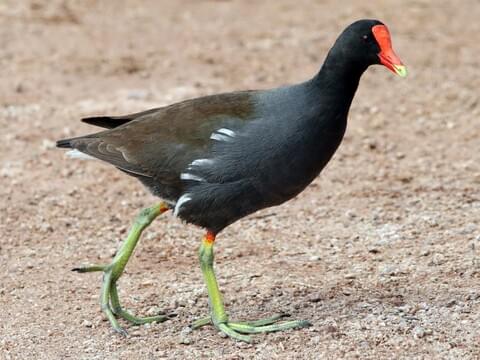 The Common Gallinules are medium-sized birds belonging to the family of rails. These birds are quite widespread throughout the state of Florida and inhabit wetlands, ponds, canals, and marshes with abundant vegetation.

They have a remarkably dark plumage with a bright red frontal shield stretching over their yellow-tipped bill. They have a white undertail and yellow legs.

Common Gallinules are known for being opportunistic feeders. Being omnivores, they can eat both plants and animals and have little reservation when it comes to food. Most of the vegetables and fruits are edible to them, in addition to small, aquatic creatures.

The subspecies of the Gallinules found in Florida are known as Antillean Common Gallinules, famous for their large feet and long bill. 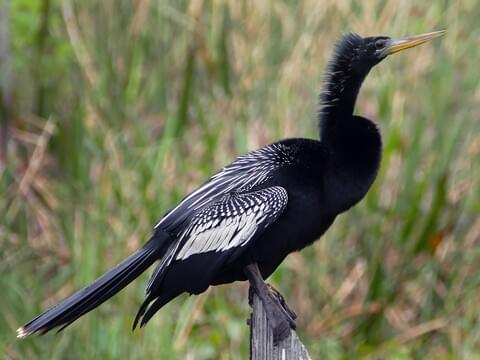 The Anhingas are water birds that inhabit the warmer regions of the Americas. The term “Anhinga” is derived from the Tupi language of Brazil, which means the devil or snake bird. Anhingas are also known by the names of “Darter”, “Water turkey”, and “Snake bird”.

When they are swimming in the water, only their neck remains above the water, which makes them appear like a snake ready to strike. Being members of the Darter family, these birds are closely related to the Australian, Indian, and African Darters.

The Anhingas have a slender, sharp beak, which comes in handy while hunting fish and other small prey. They have a dark body with a green gloss over their wings and a bluish-black, glossy tail with a white tip.

Both sexes appear similar; only the females have a pale-grey buff. Due to their similar shape and size, these birds are often confused with the Double-crested Cormorants.

While a couple of the black birds mentioned above are endemic to Florida, other species are merely temporary inhabitants in the state. If you go through the article thoroughly, you will learn a lot about the characteristics of these birds, which can help you with identifying them in the future.