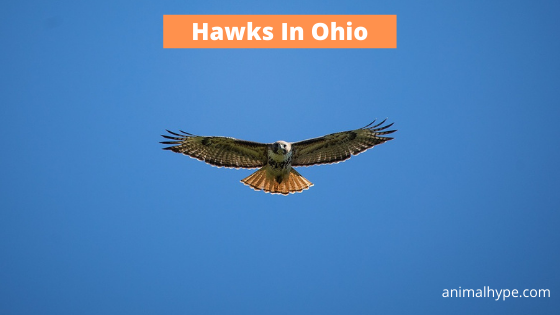 In the world of bird-watching, birds of prey are not a common sight, be it eagles, kites, hawks, or falcons. But you know what they say, we all crave things that are hard to get. The same is true for most bird enthusiasts. Watching these fierce birds in flight makes their day.

Due to the rare sightings of these birds, most of the time, the bird-watchers lack enough knowledge about raptors in order to distinguish between them.

Did you know that 8 different species of Hawks inhabit the state of Ohio? If you didn’t, don’t worry. We are here to brush up your knowledge about these 8 Hawk species. 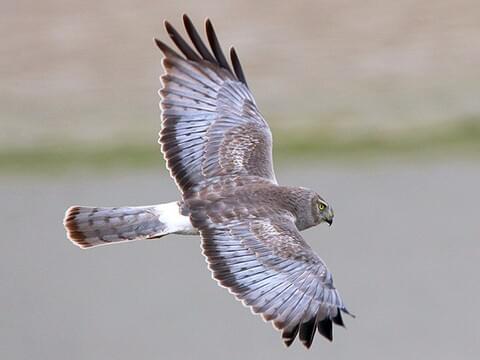 North America is home to only a single species of Harriers, i.e., the Northern Harriers. Although they are members of the hawk family, their hunting traits are similar to the owls; they rely on their vision and hearing to hunt. They are also known to drown their prey in order to kill them.

Northern Harriers are migratory hawks and inhabit the northern regions of North America. They do not have a permanent home in Ohio but are only seen in the state during winter when they migrate south.

The Northern Harriers have the longest tail and wings in ratio to their body, surpassing all other Hawk species found in North America. They have a sexual dimorphism in which both sexes have different appearance and voice.

The males have grey plumage, while the females appear to be rufous in color. The females are also heavier than males. The calling sound of the males is “chek chek chek”, while in flight, they make a “chuk uk uk uk” sound.

The females, on the other hand, produce a whistle like “piih eh” when exchanging food with the males, and their alarm sounds are “chit it it it it et it”. 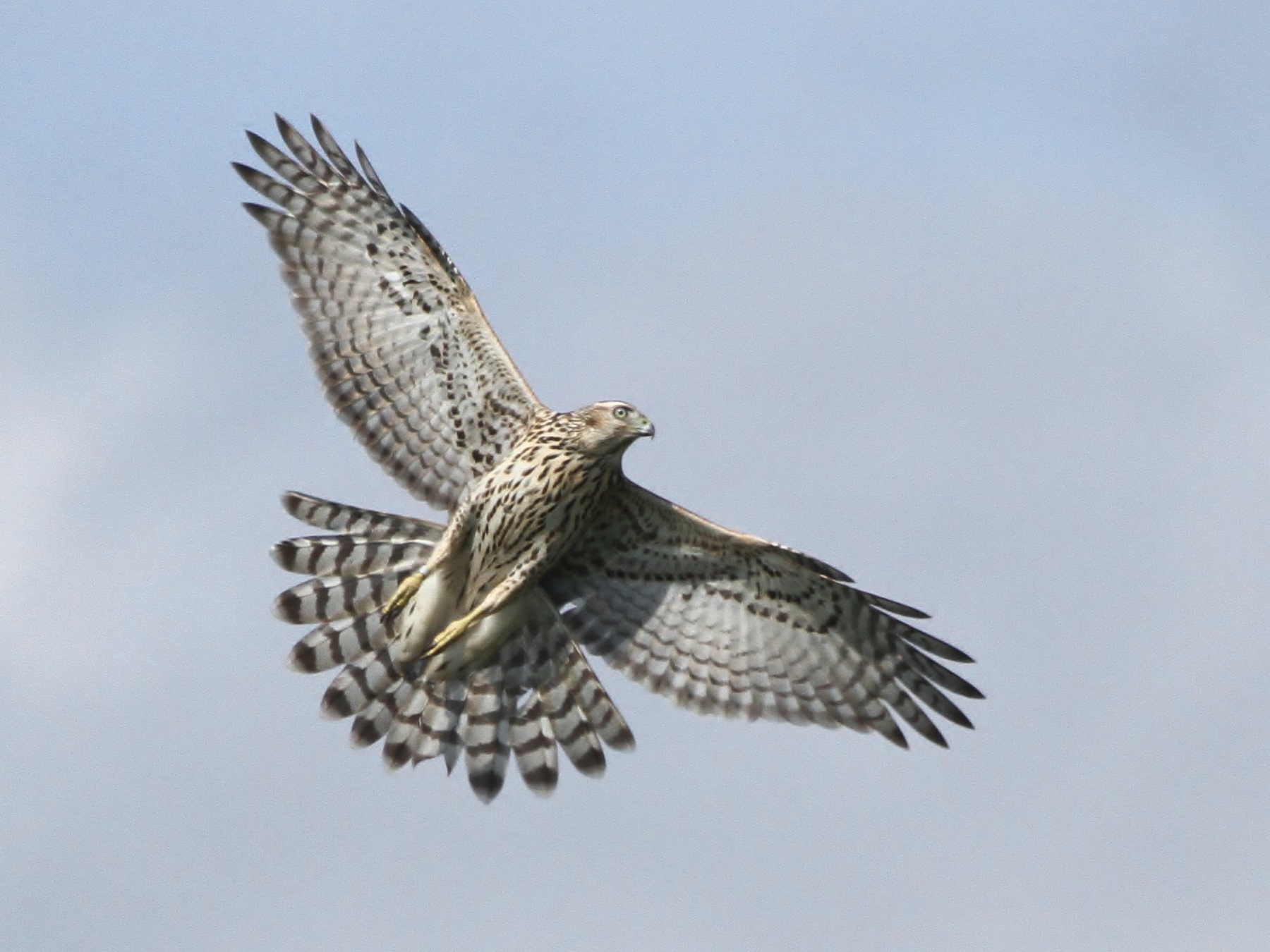 The Northern Goshawks are large birds belonging to the family of birds of prey. These raptors are not the breeding inhabitants of North America, but appear in the mountain ridges during the fall when they are migrating south.

Although they are large in size, their wings are relatively short but broad, with a long tail that is characteristic of their family. They have two morphs, dark and light, and are more commonly seen covered in a pale grey.

Northern Goshawks are silent birds who only produce sound during the courting or nesting season. While delivering food, the males produce a high-pitched “kew kew kew kew”, and a croaking sound of “guck” or “chup” at other times. The females, on the other hand, produce intense sounds of “whee-o” or “hee-ya”.

You might not know this, but there are about 2 million Red-tailed Hawks in North America, which makes up 90% of their total population on the Earth. Therefore, they are one of the most widespread hawk species found in the continent.

These hawks were first described by Johann Friedrich Gmelin in 1788 in Jamaica, which is why they have “jamaicensis” in their name.

Red-tailed Hawks begin their day quite early and can be spotted in flight in the early mornings. They have a special preference for deserts, where they can perch on a high vantage point for hours, searching for prey. However, they have adapted with time and can now be found in the mountain ranges of North America as well.

These hawks have a dark brown head and neck, which gives them an impression of wearing a hood. Their throat is a lighter shade of brown, appearing to be like a necklace. Their undersides are pale with dark spotting all over them. Although they are known for their brick-red tails, not all of their subspecies have it.

You can never mistake the cry of the Red-tailed Hawk, a high-pitched, hoarse scream that lasts for a couple of seconds and sounds like “kree-eee-ar”, “sheeeeee”, or “tse-eeee-ar”.

Many bird-watchers have compared their cry with a steam whistle. Their warning sounds are more like a groan, and sound like “guh-runk”. During the courting season, they produce a call that sounds like “chirp-chwirk”. 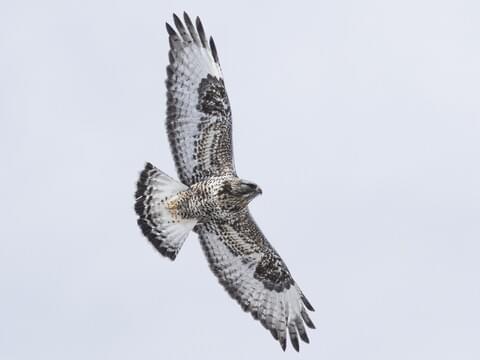 In many parts of the world, the Rough-legged Hawks are referred to as “Rough-legged Buzzard”. They are the only hawk species of North America who have feathers on their legs all the way to their toes. These hawks breed in Europe, Russia, and the Palearctic.

In North America, you can find them in the Arctic and Subarctic region during the breeding season. During the winters, they migrate to the southern parts of the continent.

The Rough-legged Hawks have a dark brown plumage with speckles all over them. A broad brown chest band is often visible below their throats, along with square-shaped carpal patches on their underwings that present a striking contrast.

These hawks have hairs on their legs in order to adapt to the harsh climates of the Arctic regions. Their talons are relatively small, which indicates their preference for smaller prey. Their tail wings do not have a white tip, which sets them apart from the other raptors of their size. Also, they are the only raptor who tend to hover over a single spot repeatedly.

The Rough-legged Hawks are not inhabitants of Ohio but appear in the state only during the winters when they are migrating south from their breeding habitats.

They have a distinctly slurry whistle which sounds like “kiu wiyuk”, which they often use as an alarm call. Another sound they produce is “kee-eer”, resembling the calling sound of the Red-tailed Hawks. 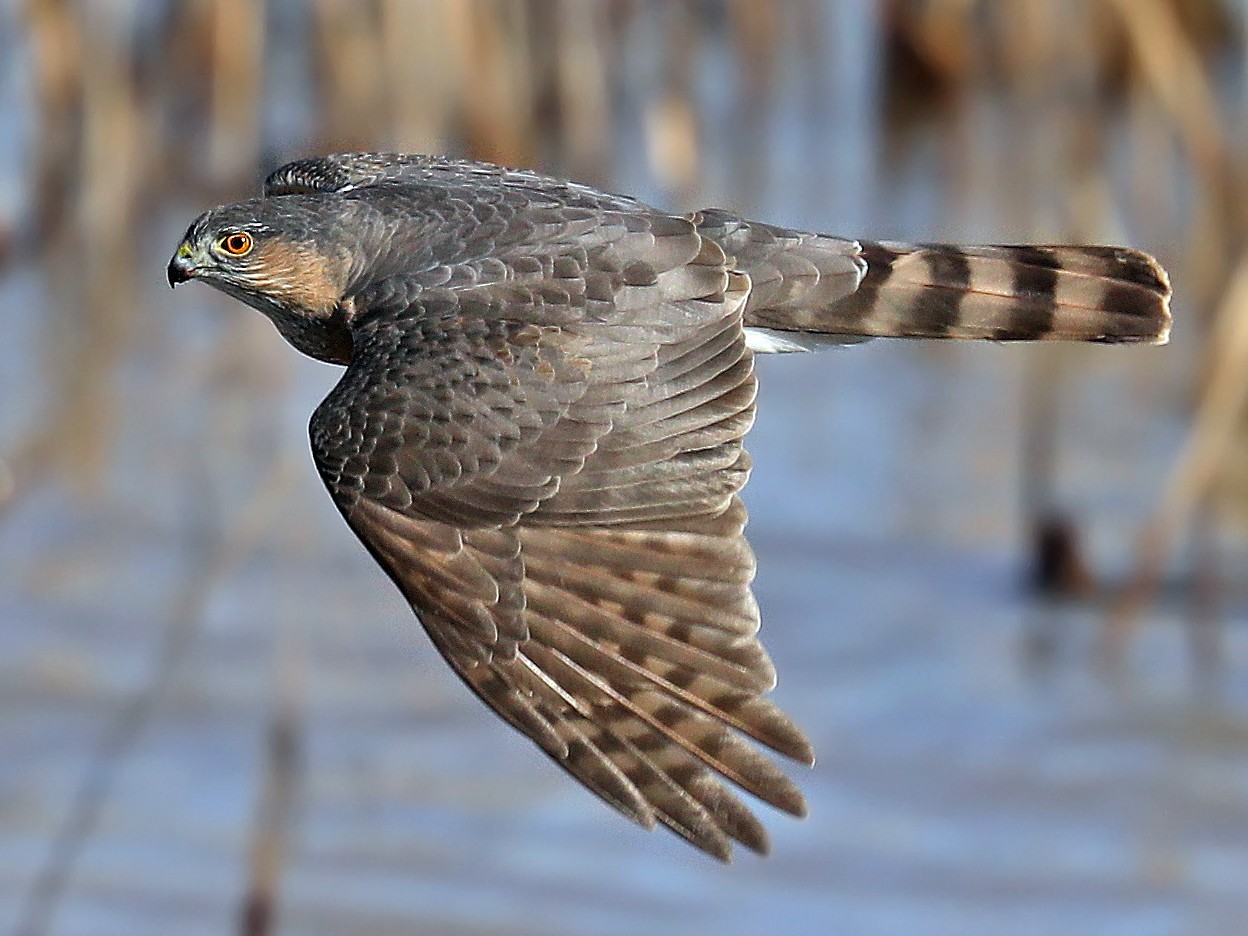 The Sharp-shinned Hawks grow about the size of a Jay and are the smallest species of Hawk you can find in North America. These Hawks are permanent inhabitants in the southern parts of Ohio but are not seen in the northern parts of the state.

They have bluish-grey upperparts while their underparts are pale white. On their head is a dark cap, with broad wings and medium length tails that are banded on the tip.

The Sharp-shinned Hawks prefer to inhabit coniferous trees, building small stick nests near the tree trunk. The males feed on smaller songbirds such as thrushes, sparrows, wood-warblers, and icterids, while the females hunt larger birds like flickers and robins.

They are also known to approach the backyard feeders in order to catch smaller birds who come to feed on it. 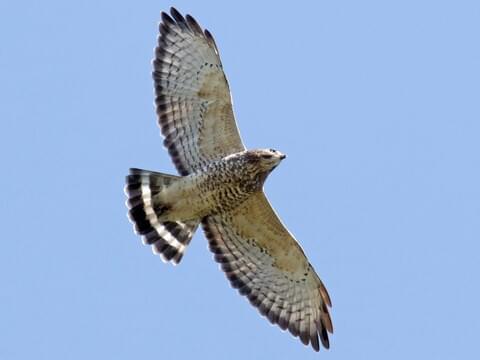 The Broad-winged Hawks are the Hawks that deserve the credit for making hawk-watching a popular event among the birders. The migration of these small-sized hawks, which begins in fall, is a much-awaited affair for the bird-watchers.

The bird-watchers gather in thousands in New England to witness their migration, traveling through the Appalachian ridges to South America, the final destination of their migration.

Although the large-scale forest fragmentation has resulted in a steady decline in their population, the concern is yet to be acknowledged by the International Union for Conservation of Nature (IUCN).

The Broad-winged Hawks are the smallest among all the hawks you can spot in Ohio. Just like their body, their tail is also shorter than of the other Hawk species. Their wings, however, are broad as their name suggests, with a pointed end, which makes them appear to be tapered.

Their throat is white in color, contrasting with their brown body. The Broad-winged Hawks have a straight trailing edge with pointed wingtips and a slow and stiff wingbeat.

They produce a thinly whistled sound of “kee kee”. For nesting, they prefer the deciduous forests and soar over the wetlands looking for food. They eat lizards, shrews, frogs, crabs, insects, small mammals, and nesting birds like cardinals.

The Red-shouldered Hawks are medium-sized hawks who breed all over the United States. These hawks have earned a reputation of being the noisiest hawks in all of North America.

Although they are non-migratory, the northern population of the Red-shouldered Hawks travels south (mostly to central Mexico) during the winters.

The head of these hawks is faded brown, while their chest and bars are colored in red. Their bellies are comparatively paler with a long, white-barred tail. Out of all the hawks you can find in Ohio, the Red-shouldered hawks have the longest tail in ratio with their body length.

In contrast with their pale undersides, the upper parts of their body are dark brown all over. Their red shoulders, which are regarded as a defining trait in them, cannot be seen in flight. Only upon a close examination of a perched hawk can you notice them.

The Red-shouldered Hawks soar by holding their flat wings forward, but when they glide, they cup their wings. Their cupped wings give them a hunched appearance. Their wingbeats are shallow and quick. They have a calling sound of a loud “kee-aah” that is repeated about 8-10 times in a row.

The main diet of the Red-shouldered Hawks consists of chipmunks, gophers, moles, mice, amphibians, reptiles, and other small insects. If they are full, these hawks are also known to store food in their nests. 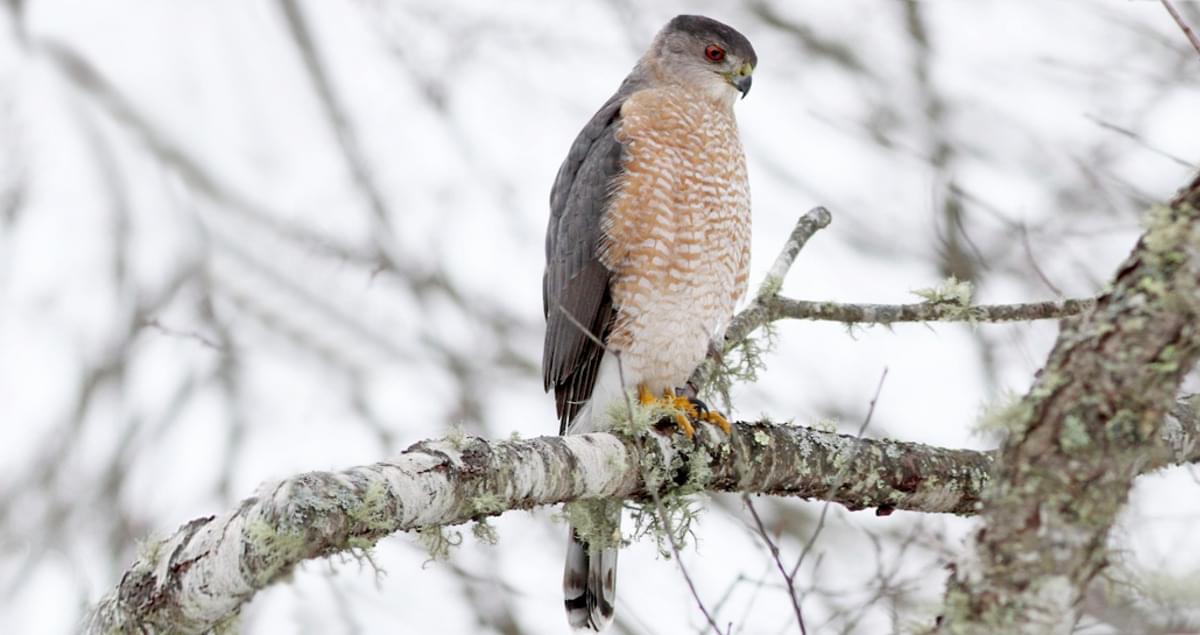 Cooper’s Hawks have been named by the French ornithologist, Charles Lucien Bonaparte, in the fond memory of his friend and colleague, William Cooper. Bonaparte had first discovered these birds in 1928. Cooper’s Hawks are the medium-sized members of the true hawk family with a wedge-shaped tail and long, thick legs.

The body of the Cooper’s Hawk is grey in color with a tint of blue or brown. Their feathers are well-defined and appear dark brown, having a paler underside. Their head appears square and has rounded eyes colored in light orange or red, and a robust bill that is hooked at the edge.

Ornithologists claim that Cooper’s Hawks have as many as 40 different calls, which surpasses the record of any other raptor. The voice of the female Cooper’s Hawks is raspier and lower in pitch than their male counterparts.

The main calling sound of these hawks is a cackling, harsh yelp which sounds like “keh keh keh keh”. Their young ones make a sound of “chirrrp” or “cheep”. You can find these hawks in Ohio all year round, for they are permanent inhabitants of the state.

Although spotting a hawk, even in flight, is a rare event, these elegant birds are unique in their appearance, flight, and calling sounds. Therefore, identifying and distinguishing between them is not a difficult task. In this article, we hope to have helped you with it enough so that you don’t confuse a particular hawk species with another one in the future.

6 Species of Hummingbirds in Ohio

7 Species of Woodpeckers in Ohio